The toned-down parade didn’t show off any ballistic missiles, but that doesn’t necessarily mean Kim Jong Un is ready for talks with Biden.

Welcome back to SitRep, with another rundown of all things national security you should keep your eye on this week.

…Starting with the most pressing national security question of all: Who will catch the five zebras on the run in Maryland?

Welcome back to SitRep, with another rundown of all things national security you should keep your eye on this week.

…Starting with the most pressing national security question of all: Who will catch the five zebras on the run in Maryland?

Horses, police dogs, and a bunch of dudes in bright red suits and gas masks: those were the stars of the show at North Korea’s midnight military parade early Thursday to commemorate the 73rd anniversary of the country’s founding.

As usual, North Korea experts in the outside world have few clues—beyond heavily curated state propaganda—to read into what the parade means and what type of signals Pyongyang could be sending.

But with North Korea’s nuclear program still threatening Washington and its allies, Western officials and experts are always quick to seize on any information that trickles out of the Hermit Kingdom.

Here are some takeaways:

Others say that’s wishful thinking. Markus Garlauskas, a former top U.S. intelligence official on North Korea who is now with the Atlantic Council, said not to read too much into the lack of strategic weapons systems in the parade. “This absence should not be taken as an indication of either a lack of continued progress in North Korea’s strategic weapons programs or of any change in the objectives that Kim set out for these programs,” he said.

Second, Kim isn’t looking so fat anymore. Pictures from the parade show whatever diet the formerly way-pudgier ruler is on seems to be working. Western analysts are particularly attuned to any signs that the nuclear weapons-hungry dictator’s health is waning. (For a few years, it seemed like Kim was suffering from major health issues, including rapid weight gain.)

“It’s striking how much healthier Kim Jong Un is looking in these photos from yesterday,” tweeted Martyn Williams, a North Korea researcher at the Stimson Center. “However he is doing it—and there are theories—he looks a lot better than he did a few months ago.”

Third, this parade is harder to read into than before. That’s because there are even fewer outsiders in North Korea now than in the past. North Korea sealed its borders during the coronavirus pandemic, even with neighboring China—fueling food and medical shortages. That led to an exodus of the already small number of foreign diplomats, aid workers, and businesspeople who had a modicum of insight into what was going on in the secretive country.

It’s like the Super Bowl for diplomats. Hundreds of world leaders, diplomats, and executives are convening for the annual United Nations General Assembly in September. Join Robbie and Colum Lynch, FP’s U.N.-based reporter, for a virtual event on Friday, Sept. 17, at 11:00 a.m. to preview the big event.

We’re also doing a weeklong newsletter to take you behind the scenes of the 76th annual United Nations General Assembly. We’ll look at how diplomatic power brokers are navigating the annual gathering, what world leaders are doing to address climate change, what a Taliban-controlled Afghanistan means, what is the global pandemic response, and other pressing issues. Click the link here to sign up!

Afghanistan’s new motley crew of rulers. The Taliban announced the leaders of their interim government this week. As Lynne O’Donnell reports for FP, many of the figures at the top of the heap will look familiar to long-time watchers of the group. (Seventeen of the 33 ministers are on U.N. sanctions lists for their ties to terrorism, as Gandhara’s Frud Bezhan points out.)

Mullah Hassan Akhund is set to take over as head of state while the one-time leader of the Taliban’s peace negotiations in Doha, Mullah Abdul Ghani Baradar, will take over as his deputy.

Sirajuddin Haqqani, head of U.S.-designated terrorist group the Haqqani network, will be acting interior minister. Washington has previously offered up to $10 million for information leading to his arrest. No word on whether that bounty still stands.

One-way ticket. Speaking of Afghanistan’s newly announced Taliban government: They allowed up to 150 Western citizens—including Americans—to fly out of the country today, departing on a Qatar Airways flight. The news is a sigh of relief for U.S. officials after the State Department was unable to clear flights in Mazar-i-Sharif, Afghanistan, which would have carried 1,000 people out of Afghanistan, due to the department’s inability to screen passengers.

Search and seizure. While the Biden administration has been focused on Afghanistan (not the Defense Department’s No. 1 national security threat), China (the Pentagon’s actual No. 1 national security threat) has been busy flexing its military muscle near Taiwan. Last week, the Chinese military flew nearly 20 planes, including nuclear-capable bombers, into Taiwan’s air defense identification zone. Today and tomorrow, the People’s Liberation Army Navy will cordon off a section of the South China Sea near the Leizhou Peninsula for live fire exercises, just after the Chinese military conducted a mock amphibious landing with helicopters and landing craft in the area.

Drone zone. The U.S. Navy’s Fifth Fleet, tasked with guarding the Strait of Hormuz, one of the world’s most crucial oil chokepoints, is planning to offload some of that work to the Pentagon’s drone fleet. Vice Adm. Brad Cooper, who leads the Bahrain-based fleet, said the Navy would introduce unmanned airborne, sailing, and underwater vehicles in the region to put more U.S. eyes on a variety of threats that could interrupt oil traffic or pose a threat to U.S. vessels, including mines and boats decked out with bombs. 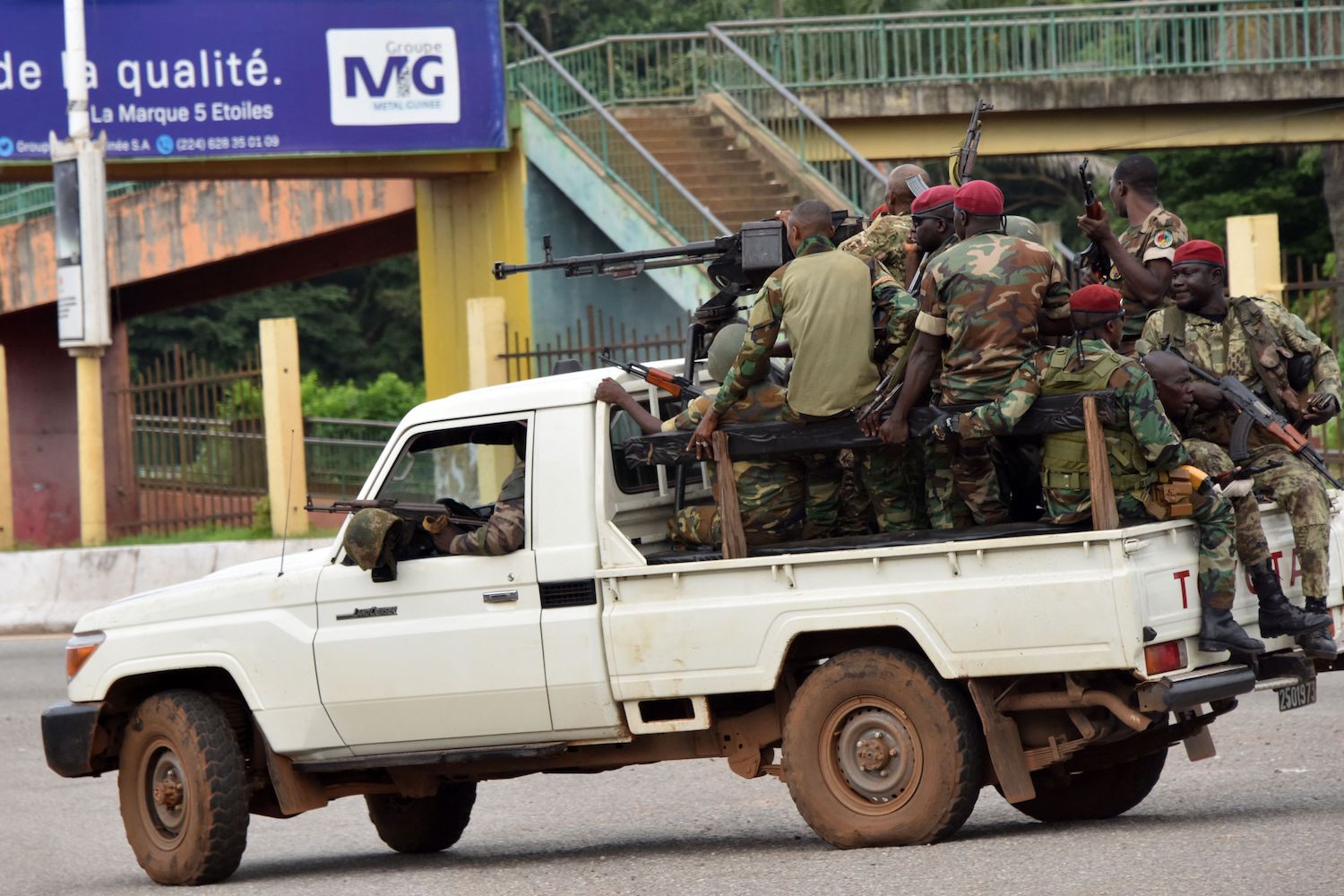 Guinean soldiers drive through the capital, Conakry, amid a military overthrow of Guinean President Alpha Condé on Sept. 5.Cellou Binani/AFP via Getty Images

From the Seattle Times: “Seattle native Will Swenson, a Medal of Honor recipient, reflects on the war in Afghanistan now lost.”

“There are some people on these boards who have supported or stood by silently while their former boss supported an insurrection. That’s not really okay with us.”

Name that fort! This week, the Pentagon announced it’s now taking public suggestions to rename bases currently named for Confederate generals. Follow that link to send them your best ideas.

Oath breaker. Can you keep a secret? This guy can’t. Roberto Minuta, a New York tattoo parlor owner and member of the “Oath Keepers” group who’s facing federal conspiracy charges for allegedly participating in the Jan. 6 insurrection at the U.S. Capitol, spilled his guts to an off-duty FBI officer and his friends as they were getting inked back in July. Oops.

You are commenting as . Change your username | Log out
Tags: Asia, North Korea, Nuclear Weapons