Chile’s constitutional rewrite aims to extinguish the lingering legacy of the 1973 coup.

The highlights this week: Chileans move to address the legacy of the Pinochet dictatorship, Uruguay eyes a free trade deal with China, and Brazil is shaken by pro-Bolsonaro rallies.

The highlights this week: Chileans move to address the legacy of the Pinochet dictatorship, Uruguay eyes a free trade deal with China, and Brazil is shaken by pro-Bolsonaro rallies.

One Way to End an Era

In the run-up to the 20th anniversary of the 9/11 terrorist attacks on the United States this month, a leading Chilean university, the University of Concepción, held a series of panel discussions on their legacy. The program referred to the events as “the other Sept. 11.”

“Other” because, in Chile, Sept. 11 is best known as the date of the country’s own national tragedy: the 1973 U.S.-backed coup against leftist President Salvador Allende that ushered in over 16 years of military rule.

The Nixon administration worked to help foment the coup as part of its broader Cold War efforts against real and perceived Soviet-friendly governments across the globe, including in many Latin American countries. In its wake, Washington supported the government of general-turned-dictator Augusto Pinochet, despite knowledge that his security forces had killed political opponents. By the Pinochet dictatorship’s end in 1990, over 3,000 Chileans were dead or missing, and thousands more had gone into exile.

Even for today’s Chileans, the Pinochet years loom large. That’s because the economic and political rules codified in Chile’s 1980 constitution remained in place long afterward, eventually becoming a target of mass demonstrations in October 2019. At the time, Chileans chanted that they were in the streets “not because of 30 pesos”—the price of a recent metro fare hike—“but because of 30 years.”

Now, the momentum behind the 2019 protests has transformed into a full-blown constitutional rewrite—and many Chileans see a chance to turn a final page on their own Sept. 11. But stepping into a new era requires overcoming the hurdles of legislative design and earning public buy-in.

In May, a 155-person assembly was elected to draft the new constitution. In July, they set to work. If the assembly jointly approves a draft, its fate will be decided in a final vote by all Chileans.

Solidifying social rights. The new Chilean Constitution could shift the government’s responsibilities on social services. Under the current, Pinochet-era constitution, “the state has a subsidizing rather than a guaranteeing role” for rights such as health and education, Chilean journalist Beatriz Michell said in an interview with Foreign Policy.

Pinochet’s constitution established a framework in which the state transferred significant amounts of money to private health and education providers while also offering free services in those areas. Critics say this system widened inequalities—worsening the quality of public provisions while driving many Chileans into debt to access the private sector. Indeed, objection to mounting student debt was a key issue in Chile’s 2019 protests: That year, Chilean households held total debt loads that were equivalent, on average, to 75 percent of their annual disposable incomes.

A new constitution could stipulate social rights that require stronger government guarantees. Brazil took this approach on health care with its 1988 post-dictatorship constitution, which states that “health is a right of all and a duty of the state.” This led to the creation of a no-fee, universal public health system modeled after Britain’s National Health Service.

Chile’s Constituent Assembly appears to be moving in this direction: Among the guiding commissions it has elected since it began work in July is a commission for social, economic, and cultural rights.

Solidifying broader participation. Under Pinochet’s legal code, some Senate seats were appointed rather than directly elected, and other deputies were chosen using a quasi-direct voting system that made it extremely difficult for small parties to gain seats.

While those rules have since been abolished, other exclusionary parts of the constitution—such as its scant provisions for Chile’s 10 officially recognized Indigenous groups—have not.

The Constituent Assembly has an 11 percent quota for Indigenous members—who make up 13 percent of the country’s population—and is headed by an Indigenous linguist, suggesting that this is likely to change. In addition, many assembly members—half of whom are women—are in favor of instituting gender parity quotas across different levels of government.

Demilitarization. During the 2019 demonstrations, Chile’s national Carabineros police force unleashed brutal violence on protesters, including killings, torture, and rape. For many, the trauma recalled memories of the Pinochet dictatorship.

A new motion inside the Constituent Assembly aims to demilitarize the police and introduce a focus on citizen policing. Proponents say that could help bring about a redesign of police training and, in turn, their role in society.

Ghosts of the past. Ivonne Domange, 71, a Chilean sociologist who fled to Ecuador for eight years after the 1973 coup, described the current constitutional process as “an open horizon” in an interview. After living through exile and fear, followed by the progress and disappointments of Chile’s democratic period, she said she welcomed the chance for a collective policy rethink, living “with tremendous hope.”

The broad public debate surrounding Chile’s constitutional rewrite stands as an example for other countries grappling with the far-reaching legacies of national trauma. This includes the United States as it considers the legacy of the wars that followed 9/11.

In fact, the two 9/11s are linked: The U.S. role in the 1973 coup helps explain why Chile and other Latin American countries were reluctant to embrace the U.S.-led military interventions at the turn of the century.

Tuesday, Sept. 14: The U.S. trade embargo on Cuba is currently set to expire, though it is expected to be renewed.

Thursday, Sept. 30: El Salvador’s budget proposal is due to congress. 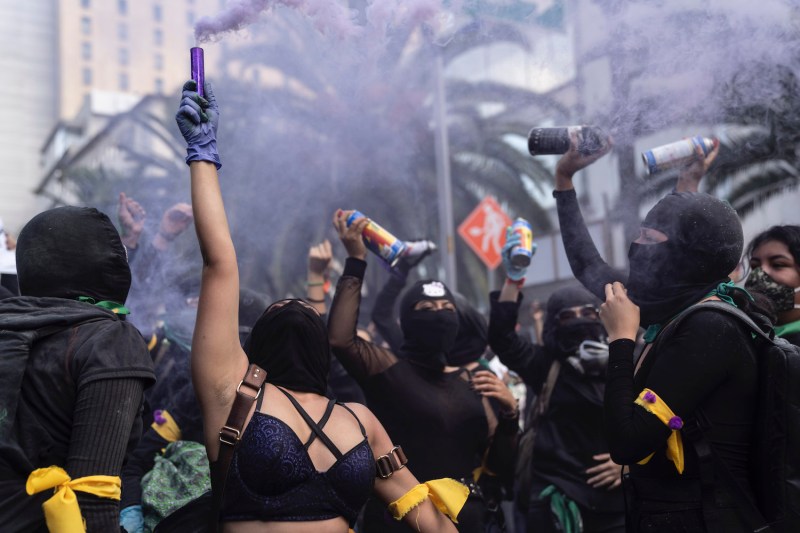 Protesters chant during a demonstration in favor of the decriminalization of abortion on the International Safe Abortion Day in Mexico City on Sept. 28, 2020.Toya Sarno Jordan/Getty Images

Abortion in Mexico. On Tuesday, Mexico’s Supreme Court ruled unanimously that abortion is not a crime. The ruling only immediately applied to the state of Coahuila, but reproductive rights groups said they will file suits in other states so that the ruling is applied more widely. If they are successful, Mexico would become the most populous Latin American country where abortion is effectively legal nationwide.

Uruguay turns to China. Uruguayan President Luis Lacalle Pou announced that Beijing made a formal proposal to Montevideo about moving forward with a free trade deal. While a top Argentine official said such a deal was not within the bounds of regional trade bloc Mercosur, Lacalle Pou said he would study the proposal by the end of the year.

Managua’s high-profile prisoner. Nicaraguan President Daniel Ortega’s detention spree against his political opponents continues: The latest arrest warrant was issued Wednesday against the writer Sergio Ramírez, who was Ortega’s vice president in the 1980s. Ramírez, who is currently outside of Nicaragua, said he would not comply with the warrant.

Post-Macondo Colombia. A new El País report looks at the post-Gabriel Garcia Márquez era of Colombian literature, seven years after the literary giant’s death. During Márquez’s era, many of his contemporaries felt the need to compete with him. But today’s work dialogues more freely without this pressure, Inés Santaeulalia and Juan Diego Quesada write.

Modern literature also takes a fresh look at parts of the country that suffered high levels of violence during Colombia’s internal conflict with guerrillas that ended in 2016. These include Tomás González’s work set on the country’s Pacific coast, as well as unusual perspectives on family life, such as Pilar Quintana’s story of a conflicted couple through the eyes of their child.

In July, Brazil’s year-on-year inflation rate was 9 percent, the highest since 2016. 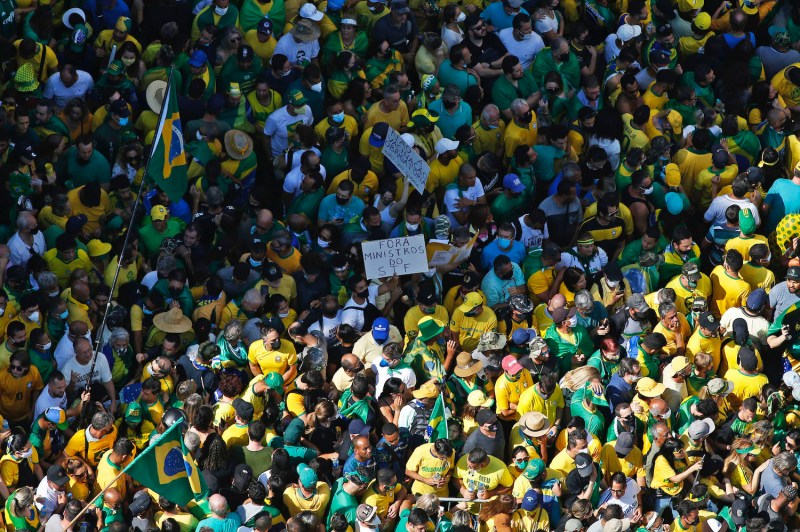 An aerial view of a demonstration to support Brazilian President Jair Bolsonaro in Sao Paulo, Brazil, on Sept. 7.MIGUEL SCHINCARIOL/AFP via Getty Images

Brazil was on edge Tuesday as supporters of President Jair Bolsonaro organized mass rallies. A long-running anti-corruption investigation against Bolsonaro’s son in the Rio de Janeiro city government advanced in recent weeks, and Bolsonaro has continued to lash out at Brazil’s Supreme Court, which is investigating him in at least four cases, among them probes of misinformation schemes and alleged bribery in vaccine purchases.

Many feared Tuesday’s rallies could have escalated into violence and, more ominously, foreshadow Bolsonaro’s supporters’ ability to stage a popular revolt to keep him from leaving power next year, when Brazil holds presidential elections. Bolsonaro is polling badly and has threatened to push through a last-minute overhaul of Brazil’s election system, though Congress blocked this attempt.

A weakened president. The protests occurred without major unrest and offered a portrait of Bolsonaro’s public backing, which has significantly weakened since he came into office in 2019.

According to pollster Atlas Político, some 64 percent of Brazilians disapprove of the president, up from 22.5 percent at the start of his term. Analysts noted that the demonstrators on Tuesday appeared whiter, on average, than the range of Brazilians who voted Bolsonaro in. It’s a reflection of how his support has fallen among Brazil’s more diverse working classes amid high unemployment and inflation.

Bolsonaro is attuned enough to his weakness on the economy that when several of his supporters—truck drivers—blocked roads on Wednesday night to demonstrate their mobilizing power (a hypothetical tool they could use should Bolsonaro stage an all-out revolt), he told them to stand down over concerns their protest could cause a spike in prices of basic goods.

Feeble institutional responses. At Tuesday’s rallies, Bolsonaro threatened to disregard potential Supreme Court rulings that were unfavorable to him, and the demonstrators themselves widely reported anti-Supreme Court sentiment, according to a survey. Many in Brazil’s opposition say Bolsonaro’s statements amount to impeachable offenses, but there is currently insufficient backing in Congress to impeach him.

Summing up the rallies, Piauí journalist and political commentator Fernando de Barros e Silva tweeted, “what happened yesterday was unacceptable, but for now, we’re going to accept it.”

Correction, Sept. 10, 2021: A previous version of this article misstated the current relationship between Chile’s Carabineros and Ministry of Defense.

You are commenting as . Change your username | Log out
Tag: Chile
Latest