Life Under the Taliban

A few weeks after militants took over Kabul and the country, Afghanistan has gone back to a past it didn’t miss.

September 11, 2021, 6:00 AM
By Stefanie Glinski, a journalist covering conflicts and crises with a focus on Afghanistan and the wider Middle East.

KABUL—Taliban fighters at a busy traffic circle outside Kabul’s airport were sitting barefoot in the back of a U.S.-made Humvee, ammunition belts wrapped around their torsos, weapons slung over their shoulders. Just over a week ago, hundreds of thousands of people had been trying to push through the gates here, desperate to get onto a plane going anywhere, eager to leave the capital that had just fallen to the militants. The country’s then-president, Ashraf Ghani, took flight too. With him, most of his cabinet disappeared, many already holding visas to third countries and owning overseas property.

They were prepared. The country wasn’t.

The Americans have since left too. The airport is once again clean and operational—at least for domestic flights and the odd charter—and the Taliban are celebrating their victory. And Kabul? The city’s face is quickly changing.

KABUL—Taliban fighters at a busy traffic circle outside Kabul’s airport were sitting barefoot in the back of a U.S.-made Humvee, ammunition belts wrapped around their torsos, weapons slung over their shoulders. Just over a week ago, hundreds of thousands of people had been trying to push through the gates here, desperate to get onto a plane going anywhere, eager to leave the capital that had just fallen to the militants. The country’s then-president, Ashraf Ghani, took flight too. With him, most of his cabinet disappeared, many already holding visas to third countries and owning overseas property.

They were prepared. The country wasn’t.

The Americans have since left too. The airport is once again clean and operational—at least for domestic flights and the odd charter—and the Taliban are celebrating their victory. And Kabul? The city’s face is quickly changing.

Outside the former U.S. Embassy in the Green Zone, a fortified quarter built to keep out the very people who are now ruling the country, a huge “Islamic Emirate” flag has been drawn onto the blast walls. A message is next to it, written in Persian: “We defeated America.” 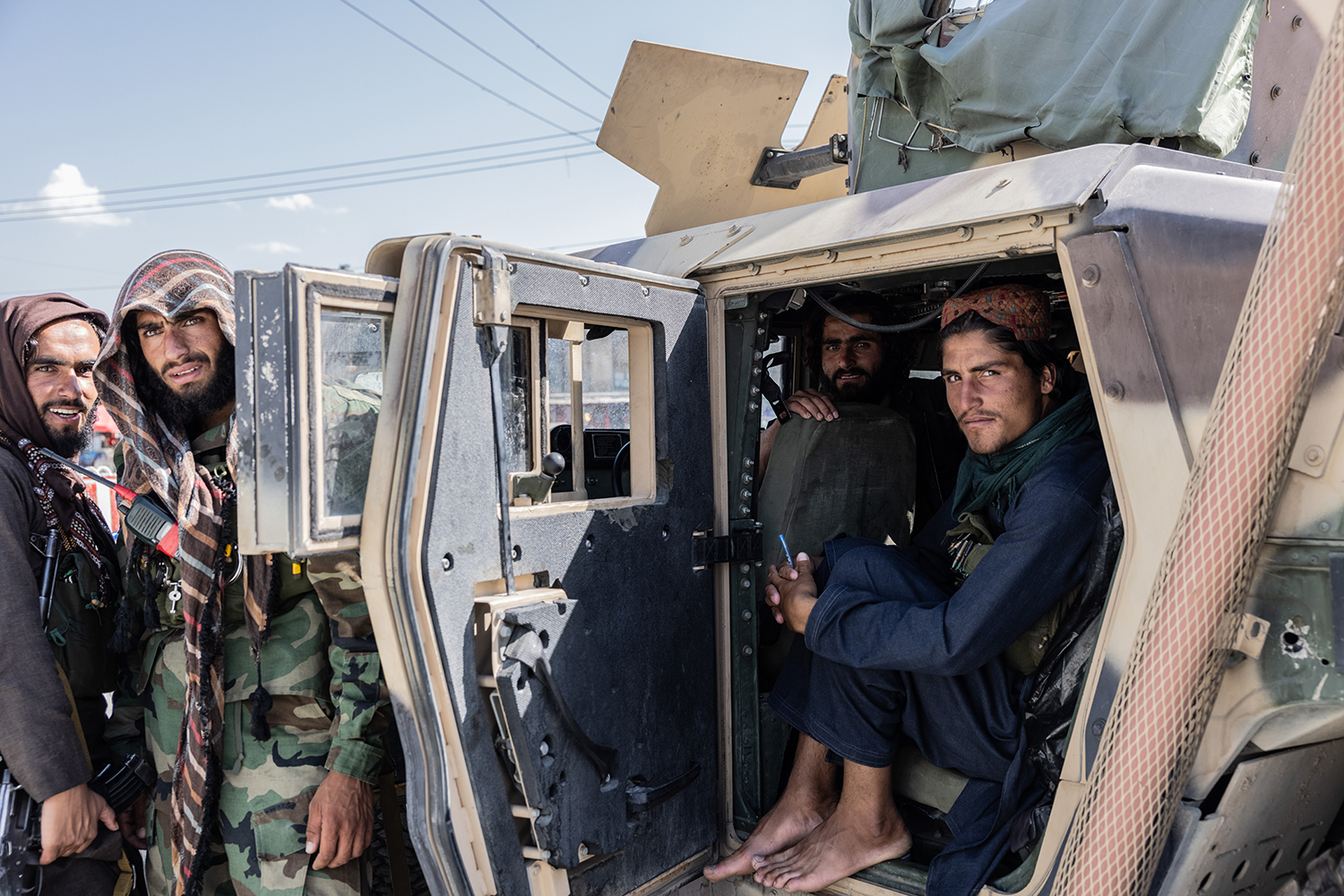 Members of the Taliban sit in a U.S.-made Humvee in Kabul on Sept. 1. Stefanie Glinski

It’s a job for Nasir Ahmad, a 36-year-old painter and calligrapher, one of several men tasked by the Taliban to redecorate the Afghan capital’s many blast walls: away with colors and the once abstract and political murals depicting the Afghan people, away with the faces of women and the mural of George Floyd, away with the Afghan national flag. Instead, the country’s Ministry of Information and Culture is putting up new messaging, one Ahmad is working on today. “People are going to live under the Islamic banner,” the words read, black on a white background. He doesn’t tell me whether he agrees with the new rulers or the all-male cabinet, but he says he’s glad to have a stable job, especially now. Inflation and unemployment are soaring, and hundreds of people line up outside the city’s cash machines every day, sweating for hours in the hot sun, desperate to withdraw even the smallest amount of money from their bank accounts as the country’s cash reserves run low. Ahmad prefers to erase the murals, one after the other, and get paid for it.

I arrived in Afghanistan the day the Americans finally left, driving across the country in a beat-up Toyota Corolla—a 13-hour drive with rolled-down windows—from Hairatan, an Afghan border town on the Amu Darya River in neighboring Uzbekistan. With international air travel still on hold, the route was one of the few ways back into the country I’d lived in for almost three years. 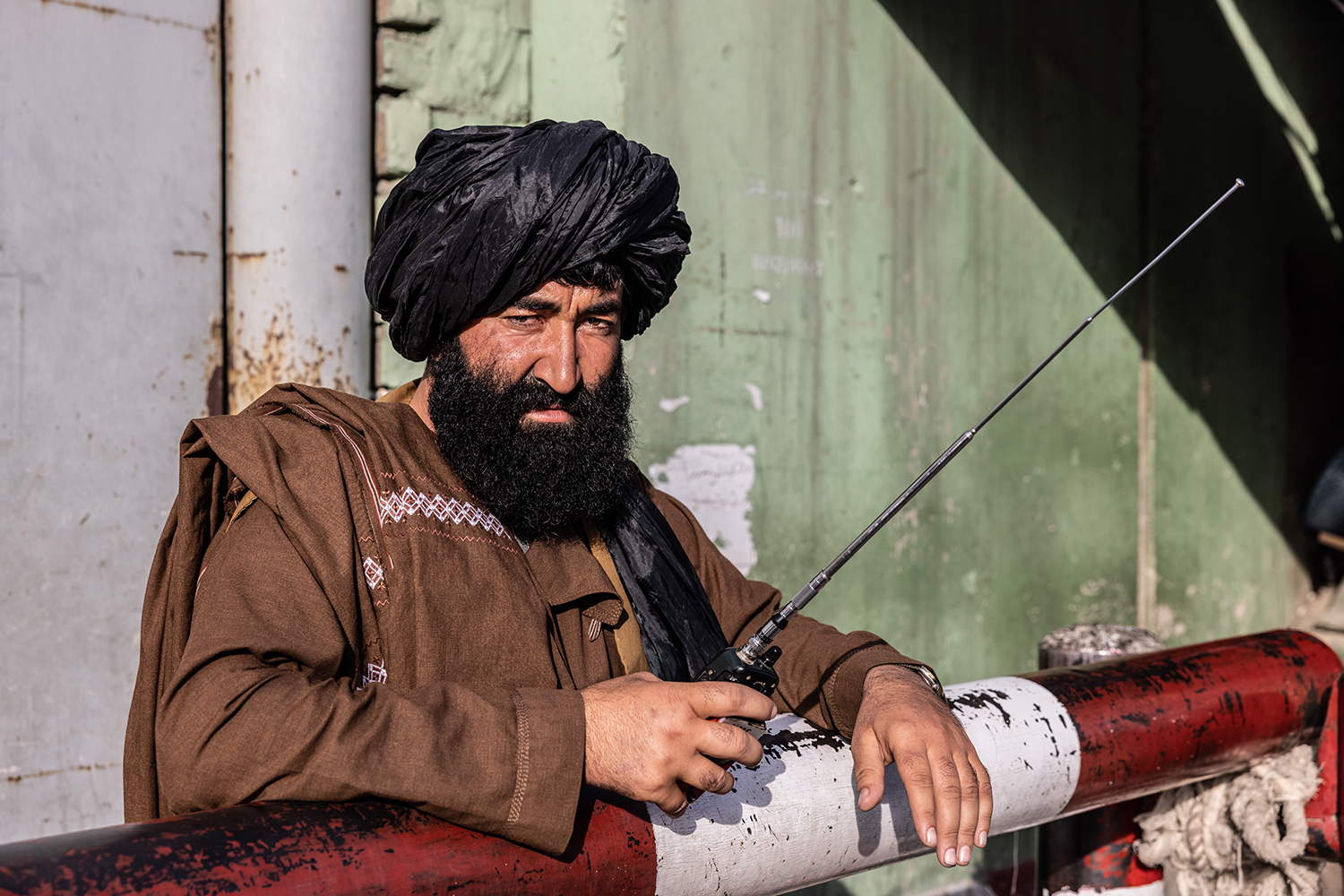 A Taliban guard mans a checkpoint in central Kabul on Sept. 2. Stfefanie Glinski for Foreign Policy

Along the way, at least a dozen Taliban checkpoints had been set up, decorated with the group’s white flags hanging from thin wooden sticks, manned by young fighters carrying weapons and sometimes grenade launchers, some sporting white headbands with the group’s flag. A few wore army boots; others sported sandals. “We won the war. Peace has come,” a fighter shouted when our car stopped in front of him before he waved us through carelessly. At another checkpoint, high in the Hindu Kush on a gravel road crossing the Salang Pass, a group of young Taliban members—maybe still in their teens—demanded a selfie, suggesting we get out of the car and pose in front of the mountain panorama. Days later, returning from an assignment in the eastern Afghan city of Jalalabad, things didn’t go as smoothly. A female colleague and I were sitting in the back of another Corolla, headscarves covering nearly our entire faces. A uniformed Taliban member stopped us on the road and harshly addressed our driver. “Next time, the women should wear a burqa. Otherwise, God is angry,” he said.

In Kabul, tensions have recently started heating up, especially since the announcement of the Taliban’s all-male interim government, made up mostly of the Taliban’s leadership council and senior members of the Haqqani network. There are few Uzbeks or Tajiks and no minority Hazaras at all. Last week, a burst of “celebratory fire” that started for no good reason lasted half an hour, killing several people. I wondered who my neighbor in the next building was, ceaselessly shooting a machine gun into the air. Protests have begun to grip Kabul and other big cities. 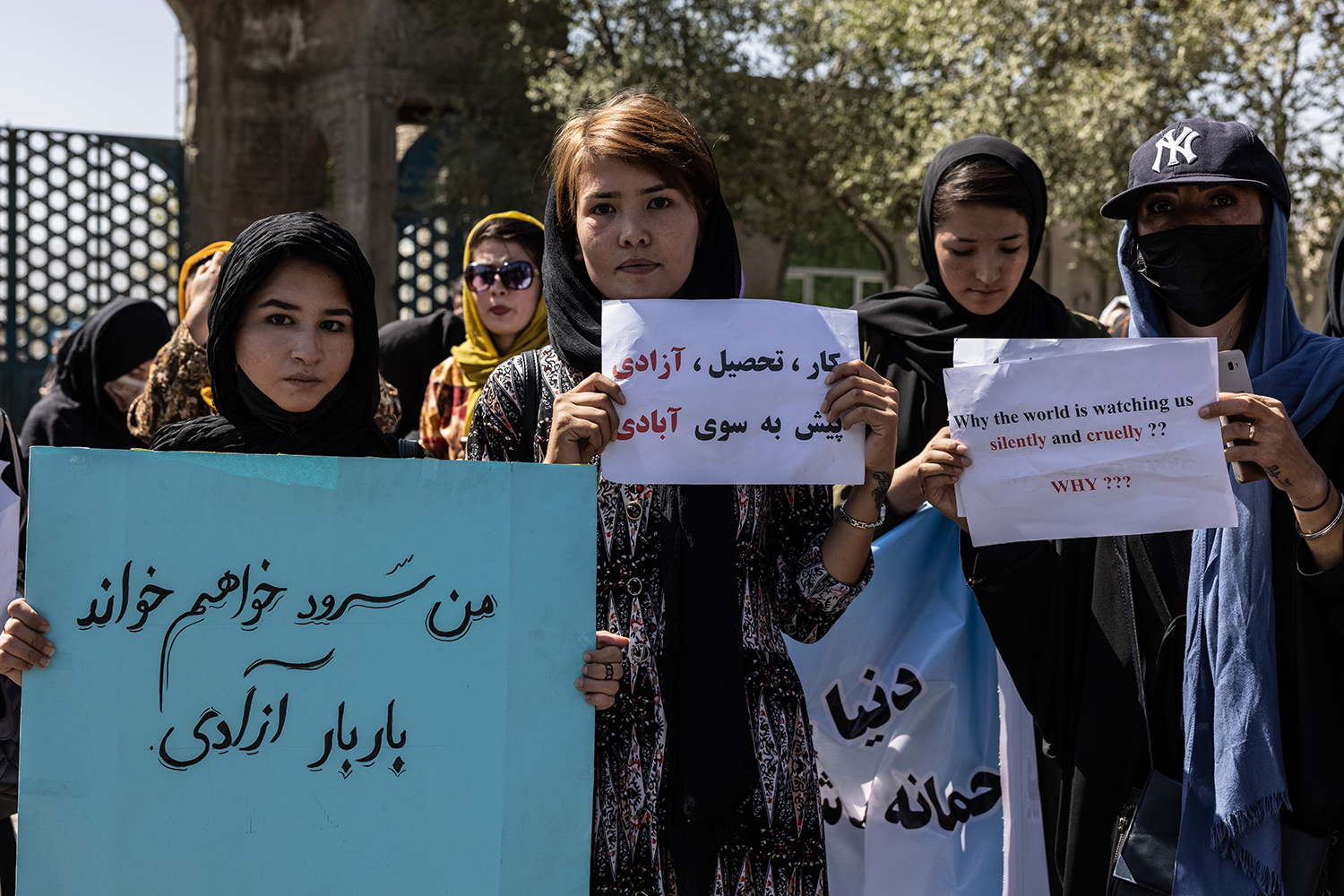 “We’ve been robbed of our rights and of all the accomplishments that the last decades have brought,” said Sabrina, a 20-year-old student fiercely shouting slogans at the Taliban in Kabul’s Dasht-e-Barchi neighborhood. Women like her have organized a number of demonstrations since the capital fell. Sabrina wore jeans, a black jacket, a nose ring, and a headscarf that barely covered half her light brown dyed hair. No burqa for her. “Never,” she said, yelling at the Taliban.

They, in turn, met the demonstrators—and the journalists covering them—with violence, their fighters shooting live ammunition in the air to disperse crowds, beating women and detaining and clubbing journalists.

“I know it’s dangerous, but what can I do? I will fight and resist. There is no other option,” Sabrina told me. “Afghanistan’s women have changed. We will not bow, regardless of the cost.”

The United States’ withdrawal may be a balm domestically. It’s anything but for those that lived through the horror.

In Afghanistan, It’s Back to the Future—of Taliban Tyranny

A government of mullahs and terrorists snuffs out freedoms despite talk of inclusion and human rights.

I tried to cover another protest. As soon as I pulled out my camera, a group of Taliban members came charging toward me aggressively. Their commander, a heavy turban-clad man trying to reach for my camera, hysterically shouted “get out.” The same day, two Hazara journalists at the same protest were detained, they told me, then beaten unconscious with sticks, cables, and rubber batons—their bodies covered in bruises.

Some aspects of Kabul seem unchanged. The smell of freshly baked bread wafts through the air in the early mornings. Most shops and big markets are open as people—men and women—shop for groceries, clothes, and kitchen supplies. The ice cream vendor with his little silver cart constantly blaring “Happy Birthday” still walks past my window. At night, vendors sell fruits and vegetables under dim battery-powered lights, announcing the prices of goods through loudspeakers. In some ways, this feels reassuring, but the city is much emptier, stripped of its former energy and life. 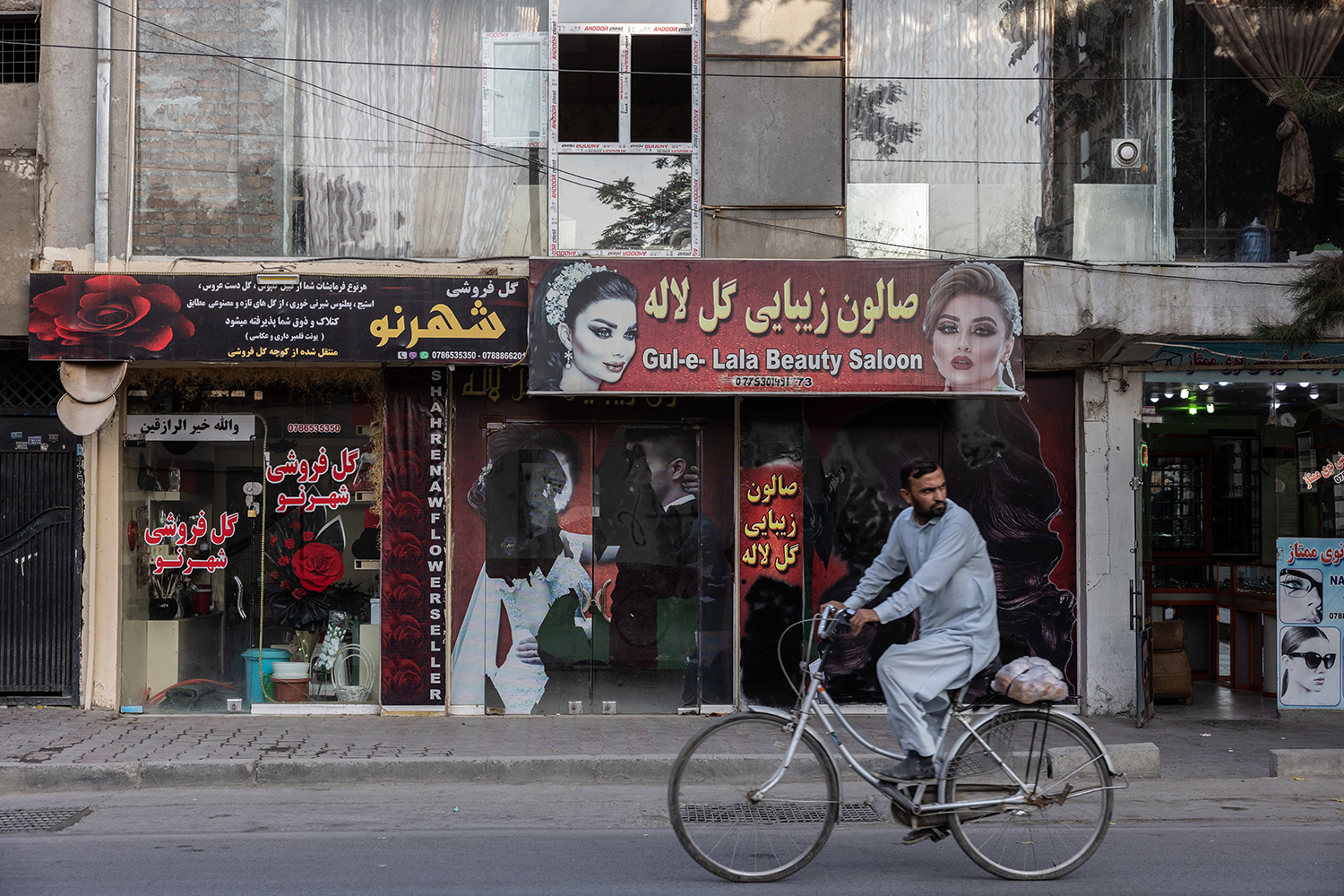 A street scene is seen in Kabul, where much of everyday life continues as usual, on Sept. 1. 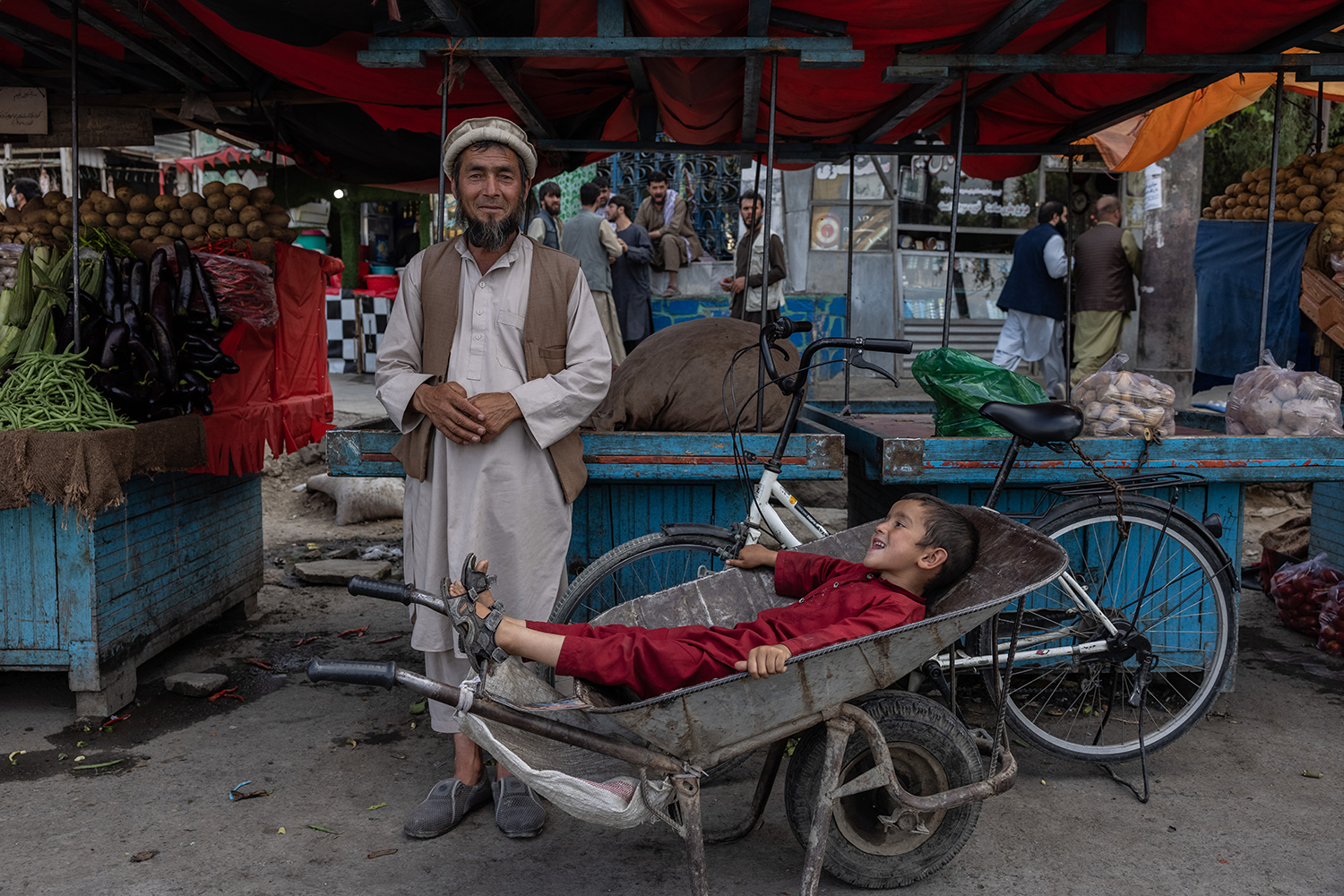 A father and son shop at a market in Kabul on Sept. 2. Stefanie Glinski for Foreign Policy

The roads are less congested, partly because many of the bulletproof vehicles that previously contributed to heavy traffic jams are absent. The little boys who sold Afghan flags by the roadside are still there, but now they’re selling the white flag of the Islamic Emirate and red headbands with the same print. Taliban fighters roam the roads on pickup trucks, flashing knives, guns, and rocket launchers. Fear is deep-seated as the Islamic Emirate offers details of its new government, which looks depressingly similar to its previous regime. The Ministry for the Propagation of Virtue and the Prevention of Vice is back, women have been forced out of many jobs, and the media is censored. This week, the Taliban demanded a mobile broadband blackout in several areas of the city, a move to quell the constantly erupting protests that are largely organized by apps like WhatsApp. Women have been segregated in schools and are denied access to certain fields of study; some women told me this includes journalism. Others have been verbally abused for going outside without a mahram, a male guardian. 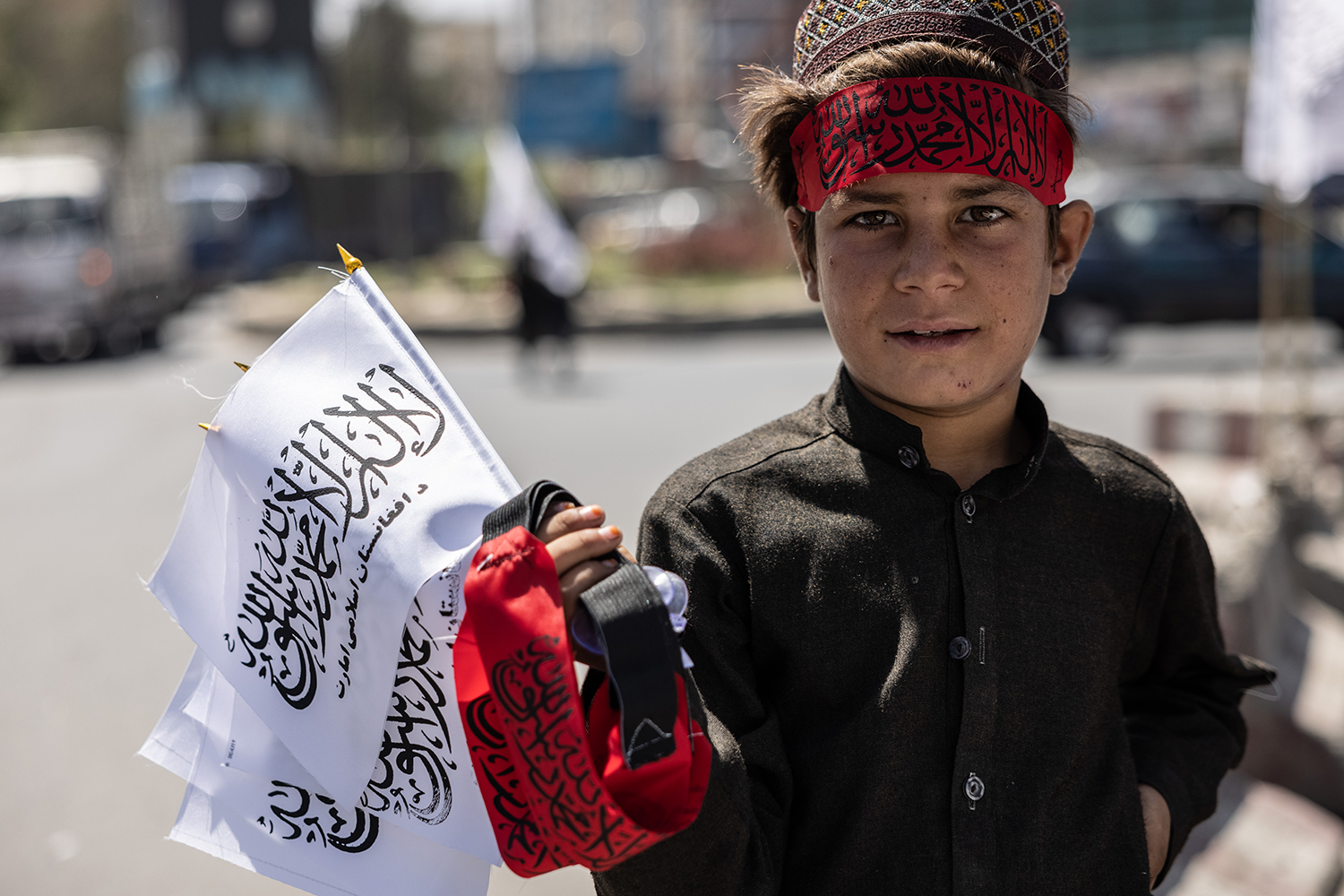 A child sells Taliban flags and bandanas in Kabul on Sept. 8. Stefanie Glinski for Foreign Policy 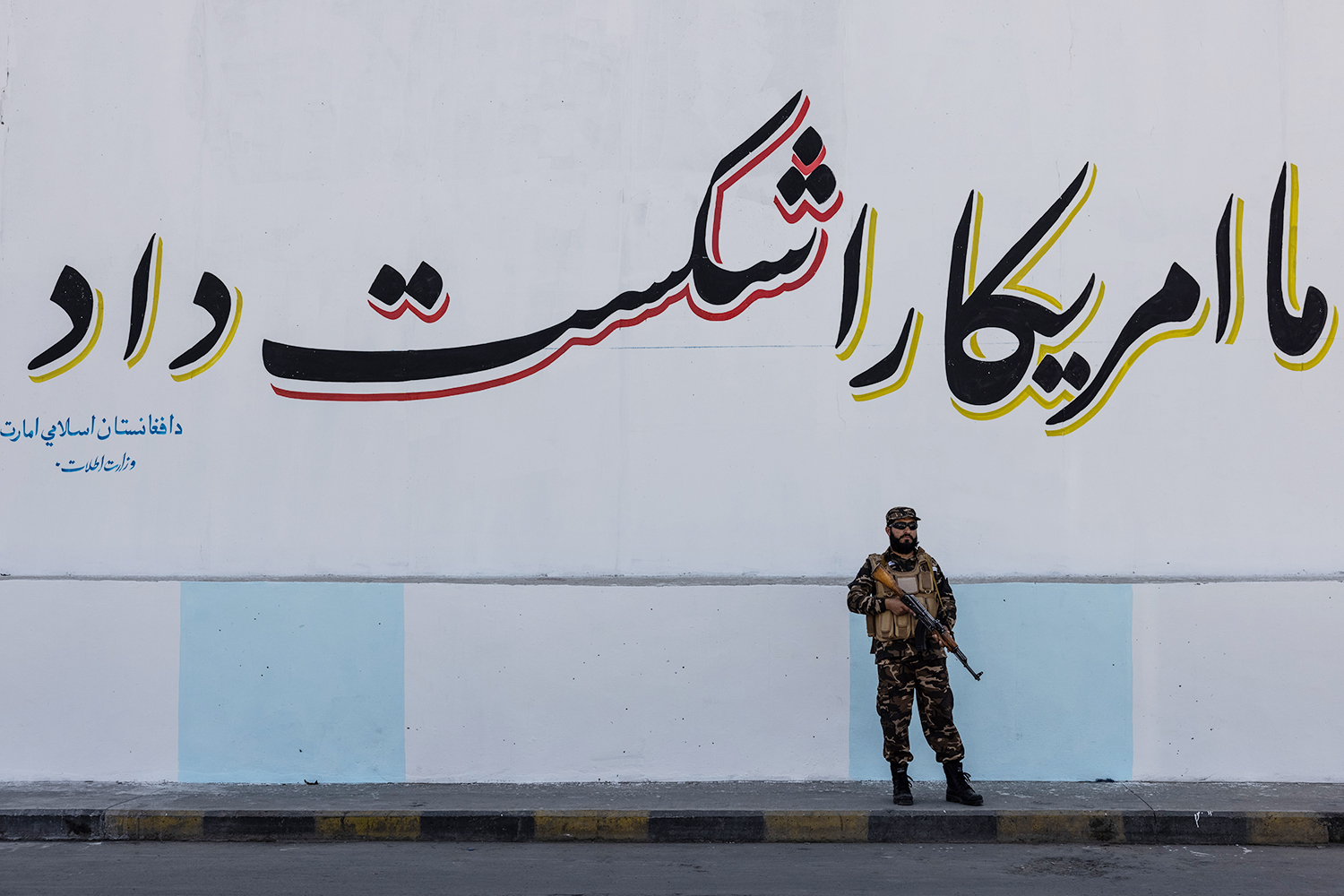 A solder stands beneath a sign that reads: “We defeated America” near the former U.S. Embassy in Kabul on Sept. 8. Stefanie Glinski for Foreign Policy

Many people are still in hiding, especially those who previously worked for the Afghan government. They are afraid to leave their homes, waiting instead for an opportunity to leave the country.

Most of my Afghan friends have already left, believing there was no place for them under the new regime. In recent weeks, they have traveled to the United States, Canada, Mexico, Germany, Rwanda, the United Kingdom, and many other countries scattered around the globe. Here, they were government employees and accountants, artists and musicians, health care workers and tattoo artists. Now they all share a new name: refugees.

You are commenting as . Change your username | Log out
Tags: Afghanistan, Security, Terrorism

The Philippines Has a Marcos In Charge Once More