The highlights this week: U.S. climate envoy John Kerry urges bilateral cooperation in New Delhi, the U.S. Senate finally confirms the top South Asia appointee at the State Department, and a rare success story for regional integration is seen in Bangladesh and Nepal.

Starting Friday, Sept. 17, FP will reprise its pop-up U.N. Brief, giving you a first-hand look at events during the United Nations General Assembly in New York. Sign up here to get it in your inbox.

The highlights this week: U.S. climate envoy John Kerry urges bilateral cooperation in New Delhi, the U.S. Senate finally confirms the top South Asia appointee at the State Department, and a rare success story for regional integration is seen in Bangladesh and Nepal.

Starting Friday, Sept. 17, FP will reprise its pop-up U.N. Brief, giving you a first-hand look at events during the United Nations General Assembly in New York. Sign up here to get it in your inbox.

Also on Sept. 17, my colleagues Colum Lynch and Robbie Gramer will preview proceedings with a live conference call, beginning at 11 a.m. As always, please reply to this email if you have any feedback.

U.S. climate envoy John Kerry visited New Delhi this week to discuss India’s climate mitigation efforts and how the United States can assist. The conversations focused on climate finance and technology cooperation as well as how Washington can help New Delhi increase its renewable energy activities. Above all, Kerry’s trip underscored how climate cooperation is quietly becoming a major part of the U.S.-India relationship, even as a fast-growing defense partnership overshadows it.

The meetings weren’t entirely successful. Kerry lamented that India has not yet committed to new emission reduction pledges before the United Nations climate conference in Glasgow in November. He also expressed concern about New Delhi’s decision to restrict funding for foreign nongovernmental organizations working on climate issues, revealed by local reports during the visit. But the meetings ultimately highlight an important yet often overlooked sphere for cooperation in a relationship so often viewed through security and geopolitical lenses.

Climate is a logical space for bilateral cooperation between New Delhi and Washington. The Biden administration has made climate a top foreign-policy priority, and India is one of the world’s most climate-vulnerable countries. Its risks are compounded by an agriculture-dependent economy and densely populated coastal regions. Worse, India’s energy policies amount to pouring kerosene on a raging fire. Coal has long been its top energy source, and its production has increased consistently in the last few decades. As a result, India’s per capita carbon dioxide emissions rose from around 15 percent to nearly 40 percent of the world’s total emissions between 1990 and 2019.

Indian Prime Minister Narendra Modi’s government appears genuinely committed to producing a cleaner energy mix. Since 2015, India’s solar capacity has quintupled, and the share of solar and wind power in electricity production has increased from 3 percent to nearly 10 percent. Notably, Modi’s government has moved away from New Delhi’s long-standing position that developing countries shouldn’t be forced to curb emissions, given that developed countries long prioritized economic growth over environmental concerns.

Kerry’s visit launched several initiatives, including a new bilateral climate action and finance mobilization dialogue. This cooperation can receive an additional boost through the Quadrilateral Security Dialogue, known as the Quad, which holds its first in-person leaders meeting next week. Climate change is a top priority for all four member states—Australia, India, Japan, and the United States—and one of the Quad’s three working groups is already focused on climate.

U.S.-India climate cooperation is, of course, unlikely to eclipse security collaborations in importance. Major challenges remain, including cost and scale constraints within India’s renewable energy sector. Furthermore, a shared concern about China’s rise is still the most powerful driver of the U.S.-India partnership.

But climate change could spark rare cooperation among the United States, India, and China— the world’s top three carbon emitters. Kerry reportedly favors ending Washington’s competition with Beijing to focus on climate issues. Although that is unrealistic, there are few shared threats as catastrophic as climate change. If tensions can experience enough of a modest thaw to enable substantive trilateral dialogue, that would deliver a major benefit to the whole world.

Friday, Sept. 24: Biden hosts a summit in Washington with the prime ministers of Australia, India, and Japan—the first in-person meeting of the leaders of the Quadrilateral Security Dialogue.

U.S. Senate confirms top South Asia appointee. On Monday, the U.S. Senate confirmed Donald Lu, a career diplomat, as the assistant secretary of state for South and Central Asian affairs—the first in nearly five years. During the Trump administration, no one was ever confirmed for the position, the most senior South Asia post at the State Department, but several officials held the position in an acting capacity.

Lu has served in India and Pakistan, and he speaks and reads eight languages, including Hindi and Urdu. In his confirmation hearing, he said strengthening partnership with India serves U.S. national interests and called for broadening relations with Pakistan beyond security issues. But now he needs help. The administration has yet to nominate an ambassador to Islamabad, and its choice for envoy to New Delhi—Los Angeles Mayor Eric Garcetti—has yet to be confirmed.

Terrorist attacks in Pakistan. Terrorists have struck Pakistan three times in the last 10 days. On Sept. 15, seven soldiers were killed in North Waziristan. On Sept. 13, an attack killed a soldier in South Waziristan. And three troops were killed in the southwestern city of Quetta on Sept. 5. The Pakistani Taliban, or Tehrik-i-Taliban Pakistan (TTP), claimed responsibility for all three attacks. The TTP boasts it carried out 32 attacks in August alone, which would be the highest monthly figure this year.

The TTP, which is separate from the Afghan Taliban, has an especially murderous track record. Between 2007 and 2014, it staged dozens of horrific attacks, including the shooting of student activist Malala Yousafzai and a school massacre that killed at least 134 children. The TTP has resurged in recent months thanks to a new leader who has reunited splinter groups and brought more cohesion to the group.

The TTP has also been galvanized by the Taliban takeover in Afghanistan, where its leadership is based. One of Islamabad’s most urgent initial demands of the Taliban is they curb the TTP. But as I wrote in Foreign Policy this week, the TTP’s close relationship with the Taliban will make that a difficult ask. 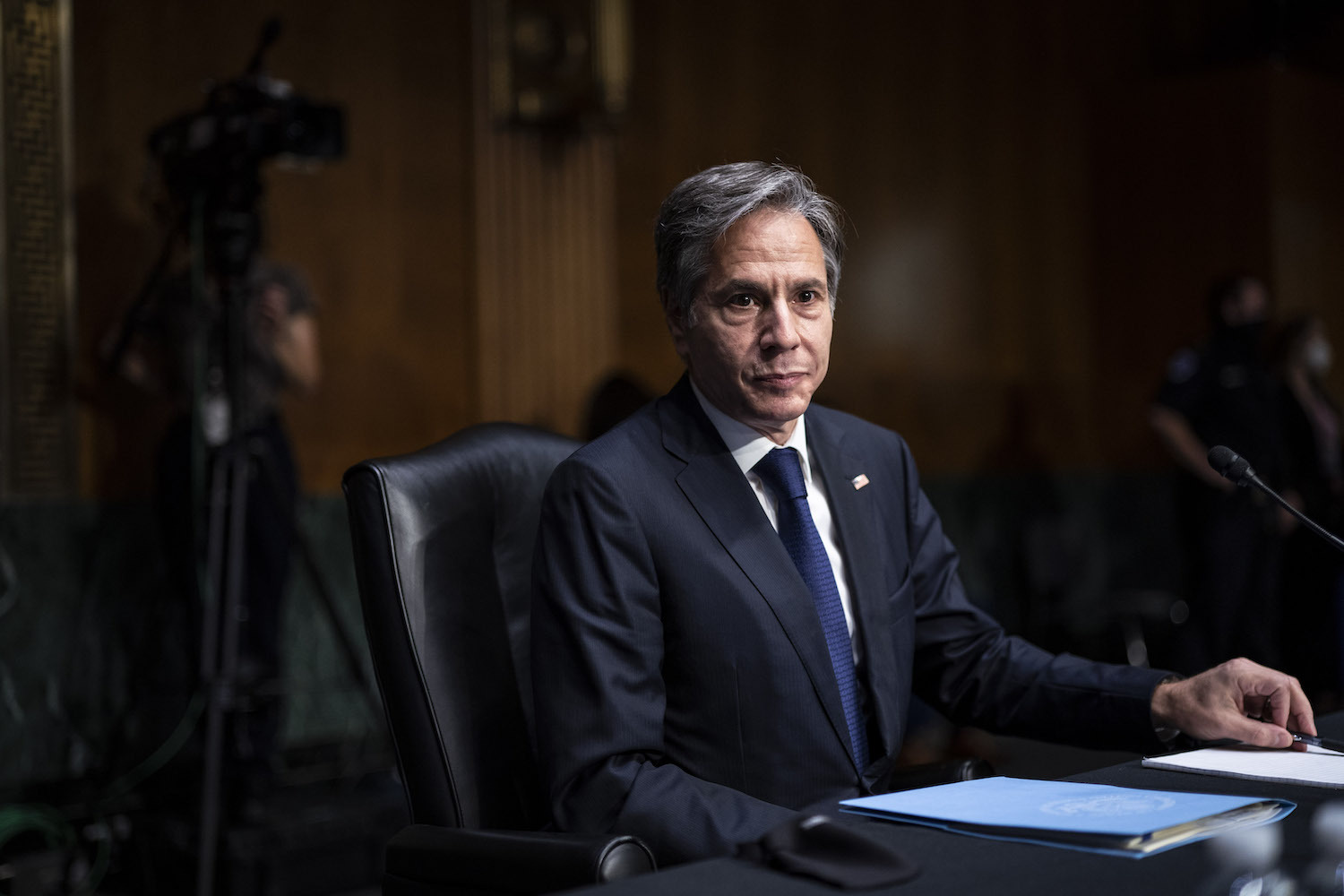 U.S. Secretary of State Antony Blinken testifies during a Senate Foreign Relations hearing about the U.S. withdrawal from Afghanistan on Capitol Hill in Washington on Sept. 14.Jabin Botsford/Pool/Getty Images

Blinken grilled on Afghanistan. U.S. Secretary of State Antony Blinken faced a barrage of questions this week about what went wrong with the U.S. withdrawal from Afghanistan, first from the House Foreign Affairs Committee and then from the Senate Foreign Relations Committee. Over two days, Republicans and Democrats alike criticized the Biden administration for its chaotic withdrawal and not adequately anticipating the Taliban takeover.

Blinken insisted the administration did all it could, and it was stuck with a withdrawal agreement it inherited from the Trump administration. One of his most striking comments was to refer to the Taliban as Afghanistan’s “de facto government”—a designation that falls short of recognition but may reflect the administration’s realization it has no choice but to engage, even informally, with the Taliban government on evacuations and humanitarian assistance.

In a rare success for regional integration, Bangladesh and Nepal announced a new cross-border electricity-sharing agreement this week that will allow power trade with the use of Indian transmission lines—a necessity given that any direct trade between Nepal and Bangladesh must run through India. The accord was made possible through an Indian policy change in 2018 that enables other countries to use its transmission lines.

The agreement is notable because South Asia is one of the world’s least integrated regions due to fraught regional relations and a lack of infrastructure. In recent years, India and Nepal have experienced border tensions while Indian and Bangladeshi relations have strained over a new Indian citizenship law that affects Bangladeshi migrants in India.

Although billed as short term and small scale, the electricity-sharing accord provides hope that similar arrangements could follow. In recent years, India has inked other energy infrastructure accords with Nepal and Bangladesh as well as with Bhutan.

“They are trying to give you the fish but not letting you fish for yourself.”

Fizza Batool, a doctoral student at the University of Karachi, discusses in South Asian Voices the role Sufism, a mystical form of Islam, may play in the Taliban’s Afghanistan. “If the ideological evolution in the Taliban—which now claims to support a policy of peaceful political settlement in Afghanistan—comes to fruition, converging political objectives makes the mystics the Taliban’s natural partner,” she writes.

Journalist Ishtiaq Ali Mehkri writes in the Express Tribune about the governance and resource struggles of Karachi, Pakistan’s megacity. The road to recovery lies in a stronger local government system and more “economic and representative justice,” he argues. If Karachi makes these gains, “the city will surely rise as a phoenix.”

A Kathmandu Post editorial decries the consequences of the Nepal government’s lack of support for start-ups: “We cannot continue complaining about brain drain if we cannot think of ways to make a conducive environment for start-ups to prosper.”

NEW FOR SUBSCRIBERS: Want to read more on this topic or region? Click + to receive email alerts when new stories are published on U.S. State Department, Climate Change, South Asia