FP’s all-star United Nations reporter Colum Lynch is anchoring today with a scoop on the Biden administration’s diplomacy with the Taliban. And here’s what else is on tap for the day: France says its military took out the Islamic State’s top man in the Sahel, U.S. Afghanistan envoy Zalmay Khalilzad goes on record about the withdrawal with Foreign Policy, and U.K.-China diplomatic tensions heat up.

FP’s all-star United Nations reporter Colum Lynch is anchoring today with a scoop on the Biden administration’s diplomacy with the Taliban. And here’s what else is on tap for the day: France says its military took out the Islamic State’s top man in the Sahel, U.S. Afghanistan envoy Zalmay Khalilzad goes on record about the withdrawal with Foreign Policy, and U.K.-China diplomatic tensions heat up.

The United States has asked the U.N. Security Council to extend a sanctions exemption allowing more than a dozen top Taliban officials to travel abroad to participate in international discussions aimed at stabilizing Afghanistan.

The move comes just weeks after the United States and the U.N. issued a veiled warning to the Taliban that if they proceeded with their military overthrow of the government they could face a reimposition of the U.N. sanctions. The Taliban ignored the warning, pressing ahead with a lightning military offensive that enabled it to seize every major city in Afghanistan, including the capital city of Kabul.

The Trump administration persuaded the U.N. Security Council in 2019 to grant a sanctions waiver to key Taliban leaders, allowing them to participate in political talks in Doha with the chief U.S. negotiator, Zalmay Khalizad, aimed at paving the way for the U.S. withdrawal from Afghanistan.

The decision to extend the waiver removes a key point of leverage that the Biden administration and others had been brandishing to pressure the Taliban to abide by the terms of a power-sharing agreement pledge they had struck with the United States as part of the U.S. withdrawal plan.

In early August, the U.N. Secretary-General’s Special Representative for Afghanistan Deborah Lyons urged the U.N. Security Council to “[make] clear” to the Taliban that sanctions exemptions were “predicated on a commitment and progress in the peace process.” Jeffrey DeLaurentis, a senior U.S. diplomat, also pointed out that the Taliban’s failure to reduce violence that threatens peace and stability in Afghanistan would affect the Security Council’s deliberation on whether to extend the waiver.

The U.S. note requests that the travel ban waiver for 14 Taliban officials—set to expire on Sept. 20—be extended until Dec. 22, and that sanctioned officials also be permitted to withdraw funds from frozen bank accounts to pay travel expenses. The waiver would only apply to travel carried out to promote “peace and stability” in Afghanistan, according to the note.

Okay we get it, you might have a lot of newsletters cluttering your inbox. But we have one that’s worth it, and it’s only for a week. Next week, Colum and Robbie are releasing a daily U.N. Brief newsletter to cover the General Assembly, the annual major U.N. summit for which hundreds of foreign dignitaries, along with U.S. President Joe Biden, are flocking to New York.

There’s a Zoom preview event on Friday for our subscribers, if you want a sneak peek at all the scoopy inside-baseball diplomacy they’re tracking, and you can sign up for the newsletter here.

The White House this week sent the nominations for four ambassadors to the Senate for confirmation: Rahm Emanuel for Japan, R. Nicholas Burns for China, Michael Battle for Tanzania, and Thomas Barrett for Luxembourg.

And on Capitol Hill: Republicans on the House Foreign Affairs Committee have tapped former CNN Pentagon reporter Ryan Browne as their lead investigator to study the Biden administration’s handling of the Afghanistan withdrawal. Browne previously served as a contractor advising the Afghan National Army.

Downing Street shuffle. British Prime Minister Boris Johnson reshuffled his cabinet this week, moving Dominic Raab from foreign secretary to deputy prime minister and justice secretary after Raab was criticized for being on vacation during the fall of Kabul. He will be replaced by Liz Truss, the former trade secretary who has been criticized for targeting “woke” culture in Britain and sometimes being too eager to get post-Brexit trade deals across the finish line.

In think tank land, the Carnegie Endowment for International Peace has picked California Supreme Court Justice Mariano-Florentino Cuéllar to be its new president. Cuéllar previously was a special assistant in the Obama White House.

The final days. No one in the Biden administration has had a closer eye on the U.S. war in Afghanistan from “soup to nuts,” as the jargon goes, than Zalmay Khalilzad, who’s taking a lot of heat in Washington these days for orchestrating U.S. talks with the Taliban that some critics believe paved the way for the group’s final victory.

In a Foreign Policy interview, Khalilzad said he pressed Taliban negotiator Mullah Abdul Ghani Baradar hard not to attack Kabul and to talk with former Afghan President Ashraf Ghani about forming a new government. But Washington is still wrestling with the question of why and how the Kabul government melted away so quickly, he said.

Sahel of a shot. The French military successfully took out a top Islamic State militant believed to be behind a 2017 ambush that took the lives of four U.S. servicemembers, top French officials said on Thursday.

In a three-day operation near the Saharan border between Mali and Niger, the French military targeted Adnan Abu Walid al-Sahrawi and his henchmen with drone and fighter jet strikes, and 20 troops stormed a hideout in a commando raid. Al-Sahrawi is believed to be killed in a drone strike that targeted two people riding on the back of a motorcycle.

Worst-case scenario. Taiwan’s military carried out an exercise this week prepping for a hypothetical Chinese attack that takes out Taipei’s main airfields, forcing the island’s air force to convert rural roads into runways. The move comes as China has increasingly flexed its military might over Taiwan, while the Pentagon’s eyes have been focused on the U.S. withdrawal from Afghanistan. The People’s Liberation Army flew 19 fighters and bombers into Taiwan’s airspace over Labor Day weekend.

Big Ben Ban. China’s envoy to the U.K. has been barred from coming to Parliament, after Beijing imposed travel bans on a handful of British lawmakers upset about human rights abuses in Xinjiang. Zheng Zeguang was due to attend a summer party in the House of Commons with the body’s China parliamentary group, but was barred after Conservative members who China had slapped with travel bans raised concerns. China’s embassy in London called the move “despicable and cowardly” in a statement. 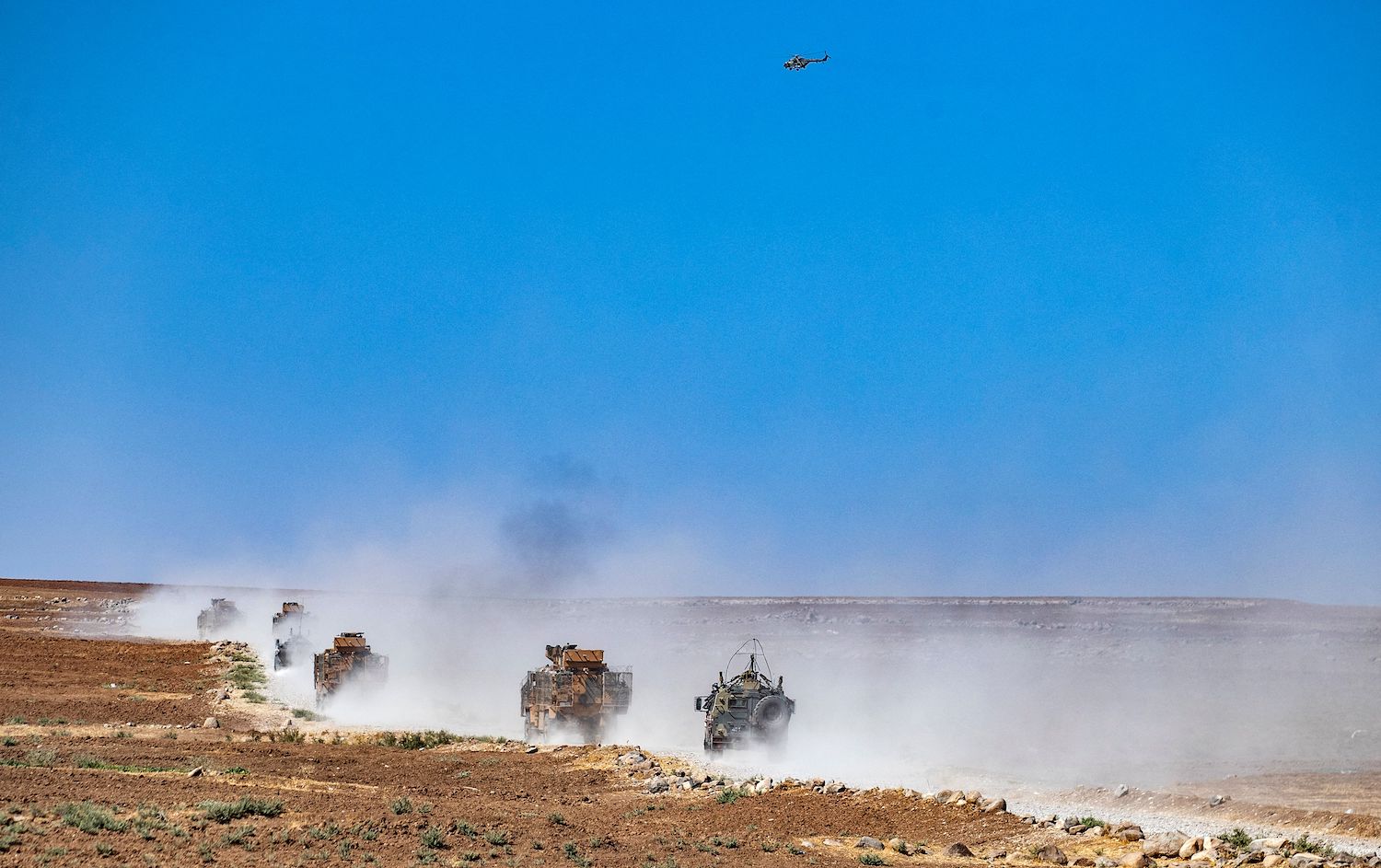 Take time out of your day to read this gripping account in Task & Purpose from Capt. Charlie Anderson, who serves in the Army National Guard, on what it was like on the ground in Kabul during the massive evacuation operation. “No one could’ve predicted how this unfolded. The entire situation was surreal,” he writes.

The Australia, U.K., and U.S. partnership to build nuclear-powered submarines may be popular among Asian hands, but let’s get real, your SitRep hosts aren’t in love with the name the Biden administration has given it, “AUKUS.” (Biden himself conceded it “sounds strange with all these acronyms” at the White House.)

So, SitRep readers, let’s forgive the AUKUS introduction and give this grouping a new name. Don’t limit yourself to acronyms (or hey, even add some new countries into the pact). We’ll start you off with a couple of ideas: “CAUUKUS,” a pact that includes Canada, from Robbie; Jack suggested adding Russia to make things “RAUUKUS.”

Sept. 26: Germany holds federal elections to pick a successor to 16-year incumbent Chancellor Angela Merkel, who is standing down.

“I want to thank that fellow down under. Thank you very much, pal. Appreciate it, Mr. Prime Minister.”

No mercy. Pope Francis is stressing the importance of being vaccinated against coronavirus, and he’s not afraid of making enemies in the college of cardinals. Speaking in Rome on Wednesday, Francis appeared to take a jab at American cardinal Raymond Burke, who was treated for COVID-19 after spreading misinformation about the vaccine. “Even in the College of Cardinals, there are some anti-vaxxers, and one of them, poor man, is in hospital with the virus,” Francis said. “But life is ironic.”

You are commenting as . Change your username | Log out
Tags: Afghanistan, Middle East and North Africa, United Nations, United States

NEW FOR SUBSCRIBERS: Want to read more on this topic or region? Click + to receive email alerts when new stories are published on United Nations, United States, Middle East and North Africa, Afghanistan