A surge in low-quality jobs may prime Latin America for social unrest.

The highlights this week: the long-term risks of Latin America’s gig-ified economic recovery, shocking primary elections in Argentina, and a dictionary-maker wades into political drama.

The highlights this week: the long-term risks of Latin America’s gig-ified economic recovery, shocking primary elections in Argentina, and a dictionary-maker wades into political drama.

But even amid this upswing, ECLAC and a fellow U.N. agency, the International Labour Organization (ILO), are sounding alarms about lingering damage to the Latin American labor market, where unemployment rates and real wages have not returned to pre-pandemic levels. Moreover, in six countries in Latin America and the Caribbean examined by the ILO in a recent report, around 70 percent or more of net job creation since mid-2020 was in the informal sector.

The ILO measures informal employment as work that does not come with access to social protection, such as a pension. By its metrics, 53.8 percent of Latin American and Caribbean workers already toiled informally in 2018. Most of these individuals are non-agricultural workers, who range from domestic workers to app-based workers like Uber drivers. In Brazil, the portion of adults who drew income from such platforms rose from 13 percent in February 2020 to 20 percent this March, the research group Locomotiva found.

The ILO report identified that young people and women have been more adversely affected by these shocks to the labor market, which amount to a “time bomb that could affect social and political stability,” the ILO’s Vinicius Pinheiro told Bloomberg. Shortly before the pandemic, several Latin American countries saw widespread protests related to inequality. Now, inequality has deepened, and prices are on the rise.

If the quality of jobs recovered in the region continues to be poor, political upheaval is just one possible consequence. More emigration is another. According to the International Monetary Fund (IMF), large informal sectors are also associated with lower productivity, a longtime challenge for Latin American economies.

Economists from U.N. agencies and the IMF have recommended that governments work to boost formal labor markets in the wake of COVID-19, whether by creating programs or incentives for new formal jobs or formalizing contracts and benefits for existing informal workers. A few Latin American governments are already implementing such measures, often as a result of pressure from organized labor.

Pandemic organizing. The COVID-19 crisis threw poor job conditions in the region into sharp relief, and many workers “turned to organizing, including virtual organizing for those with internet access,” Marcio Monzane of UNI Global Union, a union that represents people in over 150 countries, told Foreign Policy.

UNI, for its part, supported Peruvian health care workers in their push for a bill that would formalize almost 300,000 jobs in the public sector by ending rules that allowed them to be hired without labor benefits. Peruvian President Pedro Castillo’s government has announced support for the measure.

In Mexico, a national domestic workers union known as Sinactraho has successfully pushed for a pilot program to enroll domestic workers in the public pension system for the first time. Its possible codification into law is up for debate in the legislative session that began this month.

The fight for better labor conditions hasn’t been confined to national borders: Representatives from both Sinactraho and UNI took part in a virtual summit last week where essential workers from different countries around the world swapped organizing tips.

Government action. Some Latin American countries have made a point to include formalization and job-creation measures in their economic recovery strategies. Argentina extended pandemic unemployment benefits to informal domestic workers, and Chile introduced a cash bonus for workers who sign new formal employment contracts. Panama’s recovery plan includes the hiring of workers to upgrade highways and other public infrastructure.

The U.N. has recommended that governments in the region focus on incentivizing jobs in sectors that tend to employ youth and women—including tourism and the service sector—as well as those that put economies on a path to a green transition, such as those in electric vehicles and other renewable technologies. In the long run, according to IMF research, one of the surest ways to promote job formalization is through access to education and skills training, which increases worker qualifications.

Drop in the bucket. ECLAC sounded a pessimistic note in a July report, writing that while the European Union, the United States, and China are all moving forward with ambitious post-pandemic stimulus plans, the Latin American and Caribbean region “lacks a strategic vision” for adapting to a post-crisis global economic scenario in which other regions are investing heavily in increasing their competitiveness. Instead, it said the region is stuck in low-productivity patterns that make it risk “accentuating its peripheral status.”

Among the barriers to more ambitious public investment and jobs programs are high sovereign-debt loads and pre-pandemic austerity commitments, either to external lenders like the IMF (in the cases of Ecuador, Argentina, and Costa Rica) or as part of domestic political agreements that had aimed to kick-start slow growth before the COVID-19 crisis (Brazil).

Latin American governments could still find flexibility in their budgets, however, by adjusting tax and subsidy policies. In addition, the current high global commodity prices could play in their favor, as many are big commodity exporters.

While finding space in government budgets for efforts to improve post-pandemic jobs is not politically easy, countries could pay the social price of not doing so for years to come. 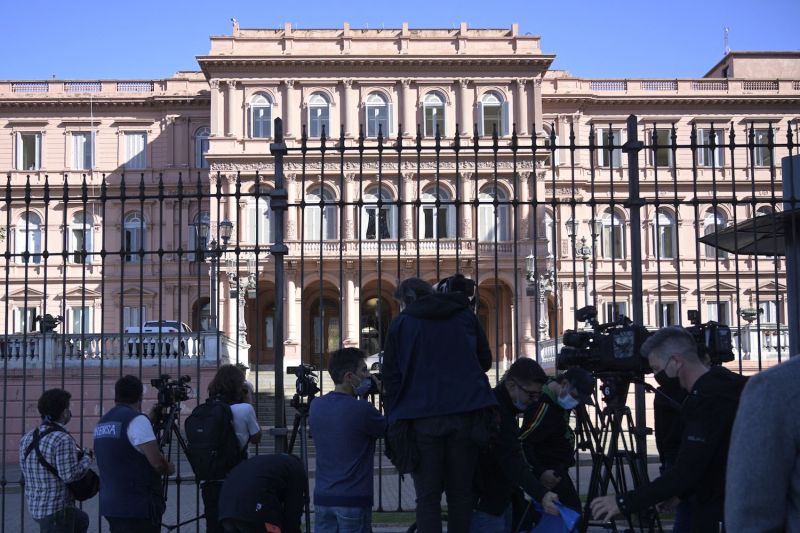 Frente de Todos is an alliance of various political strains within the country’s left-wing Peronist movement. On Wednesday, five resignation offers were made by government officials from a faction headed by Vice President Cristina Fernández de Kirchner—showing that the coalition is even weaker than Sunday’s election results suggest.

Havoc in Haiti. Haitian Prime Minister Ariel Henry fired the country’s top prosecutor and its justice minister on Monday, ordering the terminations just before the prosecutor filed to summon Henry for questioning about the July assassination of former President Jovenel Moïse. The prosecutor had attempted to bar Henry from leaving the country.

A key suspect in the killing, Joseph Felix Badio, called Henry two times a few hours after the crime, according to a police investigation. The prosecutor claimed this was grounds for further probing.

Start-up surge. The Japanese conglomerate SoftBank became one of the biggest players in venture capital in Latin America after it launched a $5 billion investment fund in 2019. On Tuesday, it pledged another $3 billion via a new fund. Investors have flocked to tech start-ups in the region this year, even as the wider economy has suffered a slow recovery.

Dictionary drama. Former Colombian Information and Communications Technology Minister Karen Abudinen resigned last week after a scandal over the misuse of funds meant for rural schools. Soon after, she had a public spat with an unlikely adversary: the Real Academia Española (RAE), the linguistic organization behind the preeminent Spanish-language dictionary.

In response to a Twitter user’s query, the RAE Twitter account had stated that the verb “to Abudinen,” or abudinear, had recently been used on social media to mean “to steal.” After Abudinen objected and demanded a retraction, RAE said that documentation of the slang term does not mean it has been added to the dictionary.

This week, the World Bank released estimates of how many people it expects will be internally displaced by climate change in three world regions, North Africa, East Asia and the Pacific, and Eastern Europe and Central Asia, by 2050.

The last time the group created such a prediction for Latin America was in 2018. How many people did it expect to be internally displaced in the region under the most pessimistic scenario?

Nearly 4 million could be displaced inside Mexico and Central America, the World Bank noted. 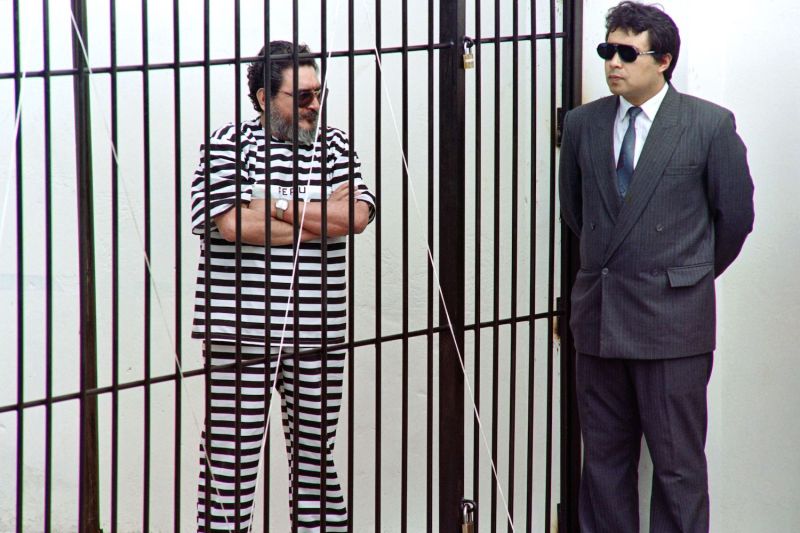 Leader and founder of the Shining Path terrorist group Abimael Guzmán talks to a Peruvian anti-terrorist policeman in jail in Lima on Sept. 24, 1992.HECTOR MATA/AFP via Getty Images

Abimael Guzmán, the leader of the Shining Path guerrilla group that killed tens of thousands of people across Peru’s countryside in the 1980s and 1990s, died in prison on Saturday.

Guzmán had been jailed for almost three decades, and the Shining Path is effectively defunct. But its legacy jumped to the forefront of Peruvian politics this year after opponents alleged during the presidential campaign that then-candidate (and now President) Pedro Castillo was close to sympathizers of the group.

Castillo’s rejection. Castillo took the opportunity of Guzmán’s death to emphatically denounce the Shining Path and its actions. His government said on Tuesday said it aimed to authorize the burning of Guzmán’s body so that his grave could not become the site of any kind of memorial.

“It is possible that the death of Guzmán will further distance the Shining Path’s violent legacy from people’s memory, as well as its association with Castillo’s government,” the Peruvian journalist Andrea Moncada writes for Americas Quarterly. “The right in particular has used the painful memory of the Shining Path and its extremist ideology to delegitimize any policies proposed by leftist parties, including moderate ones, over the past thirty years.”

Body politics. Guzmán is not the only Latin American historical figure with controversy surrounding their remains. The body of former Argentine first lady Eva Perón was secretly buried in Italy after her 1952 death, and it was only repatriated in 1974.

You are commenting as . Change your username | Log out
Tag: Economics