On your marks, get set, staff up!

Welcome to Foreign Policy’s SitRep! Hope you’re planning a wee day out for yourself this weekend, but first, here’s all the defense news you need to know.

Welcome to Foreign Policy’s SitRep! Hope you’re planning a wee day out for yourself this weekend, but first, here’s all the defense news you need to know.

After months of procedural limbo in the Senate, the State Department is finally getting some of its senior leaders in place as Senate Democrats maneuver to overcome a blanket hold from Republican Sen. Ted Cruz.

This is thanks in large part to Sen. Robert Menendez, chairperson of the Senate Foreign Relations Committee, senate aides told SitRep.

Once they actually got to the full floor voting stage, most of these nominees weren’t that controversial. Donfried, for example, was confirmed by a vote of 73 to 26. It’s the politics of the confirmation process before that point—from their nominations on the Senate Foreign Relations Committee to carving out enough floor time for a vote—that’s causing Team Biden the most headaches.

What’s in a name? For the uninitiated, the “assistant secretary of state” role doesn’t sound like much. But one seasoned diplomat who spoke to SitRep compared it to a regimental commander in the military. You’ve got your four-star generals; you’ve got your majors, lieutenants, and privates; but you need that level in between to carry out orders, take initiative, and get things done.

Okay, it’s an imperfect analogy, but routine foreign-policy work at the State Department is gummed up without confirmed assistant secretaries of state in place to make decisions.

What about ambassador posts? Yep, those are mostly stuck too. Biden has been slow to nominate ambassadors out of the gate, but the Senate blockade isn’t helping. Just 2 of 61 total ambassador nominees have been confirmed since Biden took office in January.

Take Vietnam, for example. It’s been nearly six months since career diplomat Marc Knapper was nominated to be ambassador to Vietnam, and his nomination is still sitting before the Senate. Meanwhile, Singapore hasn’t had a U.S. ambassador in place since the Obama administration—almost six years.

All’s not well in the Senate. The holds have caused a lot of tension between Democrats and Republicans on the Senate Foreign Relations Committee, which has traditionally been seen as a more bipartisan committee on the hill.

Cruz’s hold over the Russian Nord Stream 2 pipeline held up nominees for ambassador posts well beyond Europe—Cameroon, Somalia, and Vietnam to name a few. (Cruz’s office did not respond to a request for comment for this story.)

“The 9/11 Commission identified the lack of confirmed senior officials as a major contributing factor in our failure to detect and anticipate the 9/11 attacks,” said Eric Rubin, a senior career diplomat and head of the American Foreign Service Association.

“We are now far behind where we were in 2001 in terms of Senate confirmations,” he added. “This is a major threat to our national security and our economic and political interests. No other country fails to promptly fill its key national security jobs.”

Hurry up and wait. European diplomats in Washington, meanwhile, are telling their capitals that the wait for U.S. ambassadors might take months or even years. It doesn’t reflect well on Washington’s reputation abroad, which has already taken big hits after four years under former U.S. President Donald Trump and now Biden’s chaotic Afghanistan withdrawal.

“It seems to be the trend now,” one European diplomat, speaking on condition of anonymity, told SitRep. “It’s rather amazing, the level of dysfunction here, even by Washington standards.”

Rebecca Ingber is joining the State Department’s legal affairs bureau as counselor on international law. She was previously a professor at ​​Cardozo School of Law in New York.

Former Obama administration Air Force Secretary Deborah James has been named chairperson of the Defense Business Board, one of the top outside advisory boards to the Pentagon. Other high-profile appointees include Sally Donnelly, a top aide to former U.S. Defense Secretary James Mattis, and Gen. Joseph Votel, a former U.S. Central Command chief.

Daniel Correa was named CEO of the Federation of American Scientists.

No talk. North Korean leader Kim Jong Un said he’s willing to restore ruptured communication with his southern neighbor but is still shunting the Biden administration’s offer to talk without preconditions. Cross-border hotlines between the two countries on the Korean Peninsula, which have never signed a permanent peace agreement nearly 70 years after the Korean War, have been left unused for the past six months.

The move, reported by the Hermit Kingdom’s state-run media outlet, comes in the wake of North Korea conducting its first short-range missile tests in six months.

Worst case. The United States is getting ready for a surge of migrants on the southern border in anticipation of the Biden administration lifting COVID-19 restrictions, NBC News reported. The worst case scenario could have 350,000 to 400,000 migrants crossing the border in October, according to an internal U.S. government count, more than double the previous record set in July.

The surge also comes as the Department of Homeland Security faces withering criticism over border agents on horseback using whips on Haitian migrants as a form of crowd control.

Russian it. Russia poses a great near-term military threat to U.S. military interests around the world, but China is catching up, according to a RAND Corporation analysis about military interventions dating back to the beginning of the Cold War.

But the number and scale of military interventions by Russia, China, and Iran remain lower than they did at the height of the global tussle between the United States and the then-Soviet Union. The greatest risk from great powers right now is that they could “more radically shift to involve substantially more-aggressive and larger-scale interventions,” the think tank reported. 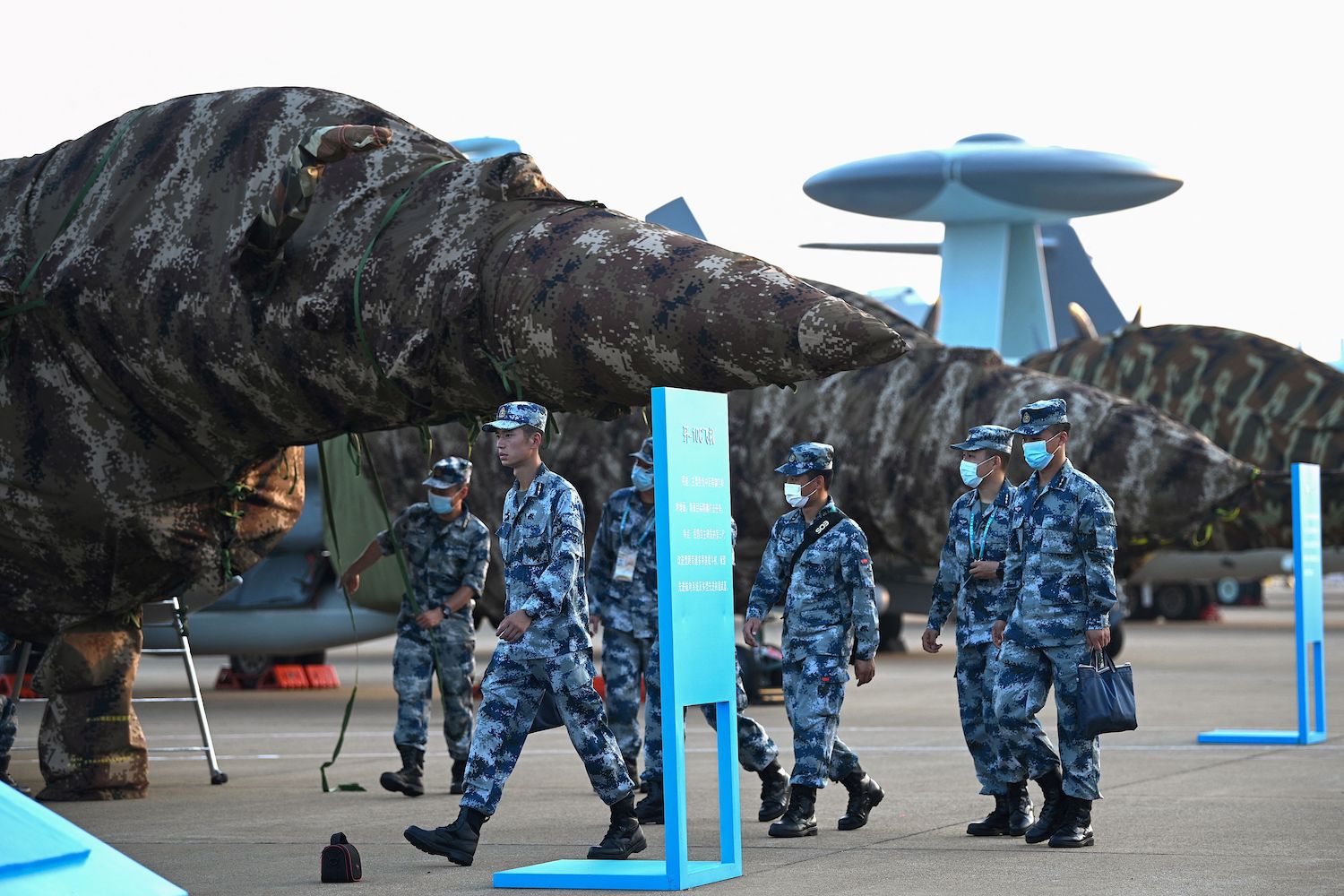 A covered Chengdu Aircraft’s J-10C for the People’s Liberation Army Air Force is seen a day before a Chinese aviation and aerospace exposition in southern China’s Guangdong province on Sept. 27.Noel Celis/AFP via Getty Images

Chairman of the Joint Chiefs of Staff Gen. Mark Milley tangled with Florida Rep. Matt Gaetz, an ally of Trump, over his predictions about the war in Afghanistan at a House Armed Services hearing on Wednesday.

Mark Milley: I believe that was an issue of strategic stalemate, and if we had remained in Afghanistan with the advisory levels of effort—

Gaetz: That’s an interesting answer to a question. You spent more time with [journalist] Bob Woodward on this book than you spent analyzing the very likely prospect that the Afghanistan government was going to fall immediately to the Taliban, didn’t you?

Milley: Not even close, congressman.

—House Armed Services chairperson Rep. Adam Smith speaks about the Pentagon leadership’s conduct under Biden during the Afghanistan withdrawal after members of the panel bashed Defense Department leaders for the chaotic war effort.

Tons of fun. It’s the most wonderful time of the year: Fat Bear Week, that is. Katmai National Park and Preserve in Alaska is letting the public vote to find its chunkiest cub—and the competition this year looks fiercer than ever.

You are commenting as . Change your username | Log out
Tags: Joe Biden, Security, United States