Can the United States Rival China in Latin America?

The newly announced Build Back Better World initiative weighs its prospects in the region.

This week, U.S. officials have been on a “listening tour” of Colombia, Ecuador, and Panama as part of a new economic push that aims to counter China’s Belt and Road Initiative (BRI). Led by U.S. President Joe Biden’s deputy national security advisor, Daleep Singh, the delegation is scouting potential infrastructure investments the United States and other G-7 countries might fund—and encourage private companies to do the same—in what will become the G-7’s Build Back Better World (B3W) initiative.

The BRI is China’s overseas infrastructure investment program. Although Latin American and Caribbean countries did not begin officially signing on to the program until 2017, Beijing had been issuing public development loans in Latin America long before then.

According to the Inter-American Dialogue, Chinese public banks since 2005 have committed to loans of more than $137 billion to regional governments and state-owned enterprises for projects that are mostly in the energy and infrastructure sectors, a trend that has also helped catalyze private economic ties. As of 2019, China is the top trading partner for several of the region’s largest economies, including Brazil, Chile, and Peru.

Although the U.S. government has monitored this burgeoning relationship with wariness for years, efforts to dissuade Latin American governments from deepening business ties with Beijing have thus far rarely moved beyond warnings and threats. Overall, Washington has failed to offer the region true economic alternatives to Chinese funding for infrastructure projects.

In 2018, for example, Panama was moving forward with plans to build a Chinese-backed railroad as part of the BRI and concurrently negotiating a free-trade agreement with Beijing. Then-U.S. Secretary of State Mike Pompeo warned against what he called the “predatory economic activity” of Chinese state-backed projects, and U.S. diplomats cautioned that Chinese projects lacked transparency and Washington would consider pulling the visas of any Panamanians found to be involved in corruption in the future. Panama City then backpedaled on both projects.

But Beijing’s cash is hard to ignore, Ecuador’s ambassador to the United States, Ivonne Baki, told Axios last week. Baki said her country might be “obliged to” shift toward China even though Ecuadorian President Guillermo Lasso “doesn’t want to.”

As U.S. officials, including Singh, develop a counterproposal through the B3W, they’ve said they will consider projects in areas like climate, health, digital technology, and gender equality. They plan to officially launch the program next year. In a June announcement, the White House called the B3W a “values-driven, high-standard, and transparent infrastructure partnership.”

Those words were likely picked carefully, as issues surrounding values, standards, and transparency have plagued Chinese overseas investments for years. A new study published Wednesday by the College of William and Mary’s AidData lab looked at 13,427 Chinese development finance projects around the world and found that 35 percent of the BRI infrastructure portfolio was hampered by implementation problems—such as corruption, labor violations, environmental hazards, and public opposition—while 21 percent of non-BRI projects had similar issues. Most Chinese development finance to Latin America over the past 15 years was committed before governments signed BRI cooperation agreements.

Since 2015, the profile of Chinese government funding for Latin American infrastructure has shifted dramatically. Loans to Latin American governments from Chinese government banks fell to zero in 2020 while direct investments by Chinese firms in the region, many of them state-backed, were on the rise preceding the pandemic. In 2019, Chinese companies announced $6.1 billion in new infrastructure projects in the region, according to Boston University’s Global Development Policy Center.

The avalanche of Chinese money in recent years has come with both benefits and risks for the region. At a recent Wilson Center virtual panel, George Washington University political scientist Stephen B. Kaplan argued Chinese loans gave Latin American governments more flexibility to eschew austerity in the wake of the 2008 financial crisis, allowing them to spend more money in an effort to soften its impact. That’s because Chinese loans came without macroeconomic policy requirements typical of International Monetary Fund (IMF) loans.

If, as part of the B3W, the United States is able to channel significant funds to Latin America, governments could work to correct this trend by building up local industries and technologies. Latin American sectors where Washington seeks to focus—such as health, green investments, and digital tech—are all ripe for such an effort, U.N. economists have written. The real potential will come when dollars are committed. 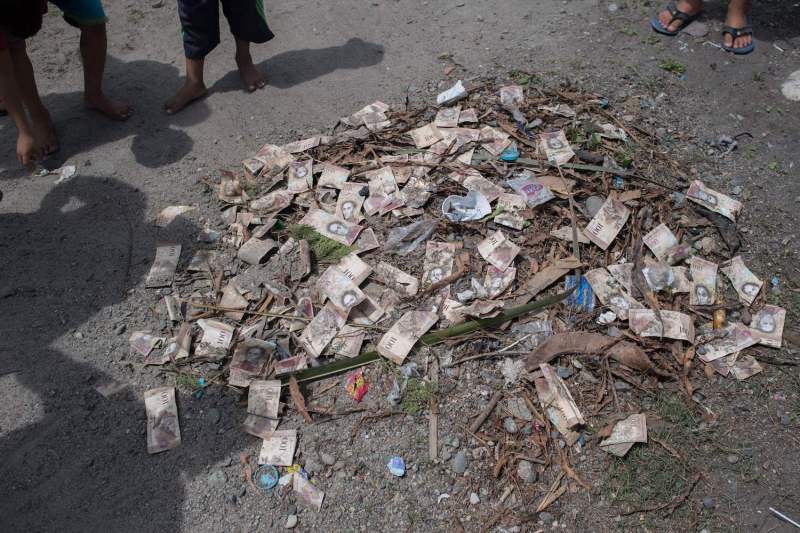 A pile of trash with unused Venezuelan bolivár bills is seen on a street of Puerto Concha, Venezuela, on Sept. 8.FEDERICO PARRA/AFP via Getty Images

Bloated bolívar. Today, Venezuela’s central bank will cut six zeros off its currency, the bolívar, and rename it “the digital bolívar” in an attempt to stave off hyperinflation. The digital bolívar is not to be confused with the petro, the country’s state-backed cryptocurrency that launched in 2018 and has yet to become legal tender. In addition to new banknotes, Business Insider reported the digital bolívar will enable payments to be sent via a text messaging-based system.

Severe inflation in Venezuela has rendered the bolívar the lowest valued currency circulating globally. As a result, nearly 70 percent of transactions conducted in the country are in U.S. dollars. Rest of World reported Venezuelans make digital payments more frequently than in any other Latin American country to circumvent cash.

“Great Wall of Lights.” An Associated Press and Univision report looked at increased traffic of giant Chinese fishing vessels near South American shores. After Chinese ships were identified turning off their tracking devices near Ecuador’s territorial waters last year, South American governments—including Ecuador and Argentina, in addition to environmentalists and the seafood industry—have raised concerns they may be responsible for overfishing and illegal fishing. Lack of enforcement in the ocean has made it “a magnet for the seafood industry’s worst offenders,” the report’s author, Joshua Goodman, wrote.

Marxist market? One of Brazil’s most famous social movements has registered with financial regulators to receive private investments via the bond market: Investors can now buy five-year bonds in agricultural cooperatives that are run by the Landless Workers’ Movement (MST), a Marxist movement founded in the 1980s that advocates for land redistribution. The MST’s organic fruit and vegetable boxes are beloved purchases among Brazilian hippies.

Droughts and desperation. As summer arrives in South America, the economic effects of severe droughts in countries like Chile, Argentina, Bolivia, Paraguay, and Brazil are only expected to intensify. “In South America, the climate future has arrived,” wrote the Washington Post.

Argentina’s total cereal output is expected to fall from 12.7 million tons in 2020 to 11.4 million tons in 2021 and 10.9 million tons in 2022, according to the United Nations’ Food and Agriculture Organization. Next door in Chile, copper mining is responsible for 10 percent of the country’s economic output. The industry is heavily dependent on water, and if conditions do not improve, a production drop of 3.4 percent this year could lead to economic losses of up to $1.7 billion, the president of the Chilean Mining Chamber said.

Brazilian crops were scorched and then frozen by uncharacteristically cold temperatures this winter, causing prices for coffee, orange juice, and sugar to soar and accelerate food inflation internationally. The drought has also caused giant sand and dust storms to blanket cities in the Brazilian states of São Paulo and Minas Gerais.

A Brazilian military program to engineer such a sub had its roots in military research beginning in the 1970s and was resurrected under former Brazilian President Luiz Inácio Lula da Silva, but progress has been slow.

In Focus: The Tussle at the IMF 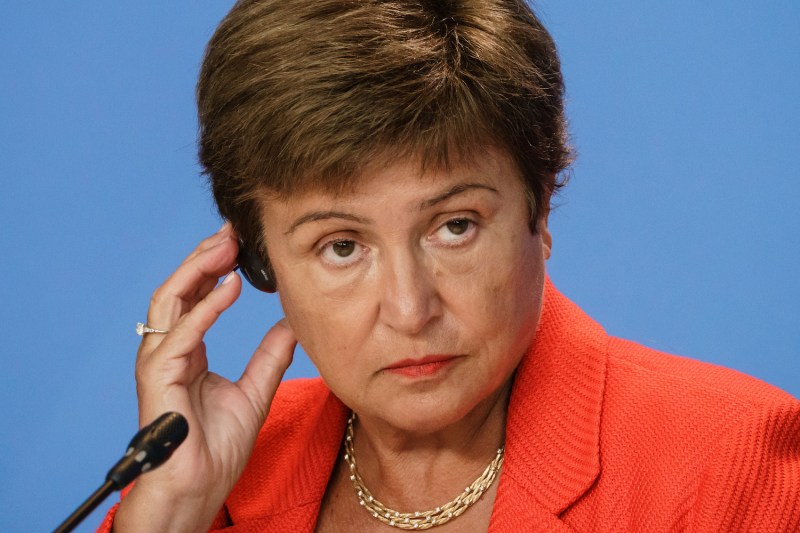 Managing Director of the International Monetary Fund Kristalina Georgieva speaks during a press conference at the German Chancellery in Berlin on Aug. 26.Clemens Bilan/Pool/Getty Images

Kristalina Georgieva, managing director of the IMF, is under pressure to step down after an independent audit said she was “directly involved” in efforts to improve China’s rankings in the World Bank’s flagship Ease of Doing Business Index in 2017 while she was the bank’s CEO. The bank itself ordered the audit and published it on Sept. 16.

The Economist’s editorial board called for Georgieva’s resignation amid the controversy, and U.S. Treasury Secretary Janet Yellen reportedly stopped taking her calls.

The Ease of Doing Business Index was designed to inform companies about what kind of regulations they could expect to encounter in different countries and was closely watched in the investment world. This has made problems with its integrity even more scandalous. In 2020, the bank announced it was pausing the index’s publication to investigate data irregularities, and it permanently discontinued the index when it published the audit last month.

Uncertain future. Georgieva’s possible departure from the IMF—or weakened position within it—could shift its pandemic and post-pandemic approach to low- and middle-income debtor countries, many of which are in Latin America. Georgieva has overseen unorthodox IMF support for stimulus and climate spending rather than strict austerity measures in those countries in recent months.

Georgieva rejected the charges of wrongdoing while at the World Bank, and a former colleague supported her account. Some big names in international economics also defended her record, with former World Bank chief economist Joseph Stiglitz writing she appears to be the victim of “a hatchet job.”

Bad track record. Allegations of political interference have hung over the Ease of Doing Business Index for years. In 2018, a World Bank official told the Wall Street Journal that changes in methodology unfairly penalized Chile under then-outgoing left-wing Chilean President Michelle Bachelet before they rose under right-wing Chilean President Sebastián Piñera without sufficient empirical justification. Last Friday, Bloomberg reported that current bank chief David Malpass “was engaged in discussions about altering methodology in a way that would potentially have hurt China’s ranking” prior to the index’s suspension in 2020.

The Center for Global Development’s Scott Morris wrote Tuesday that if the World Bank wants to recover its integrity, it should model itself on the AidData report’s scrupulousness. AidData’s dozens of researchers discovered $385 billion in Chinese loans that were not recorded in the World Bank’s own statistics.

You are commenting as . Change your username | Log out
Tags: Economics, North America, South America

NEW FOR SUBSCRIBERS: Want to read more on this topic or region? Click + to receive email alerts when new stories are published on Economics, North America, South America