U.S. Deputy Secretary of State Wendy Sherman is visiting India and Pakistan this week. Her trip underscores the diverging trajectories of U.S. relations with the two countries. The United States and India’s relationship is flush with momentum, although it is not immune to setbacks. Meanwhile, its relationship with Pakistan faces an uncertain future—but it still has potential for cooperation after the withdrawal from Afghanistan.

In India, Sherman engaged with officials to discuss a variety of issues, from Afghanistan to Indo-Pacific strategy. She met India’s foreign secretary, foreign minister, and national security advisor, along with civil society and business leaders. Sherman also participated in the India Ideas Summit, hosted by the U.S.-India Business Council.

The future of U.S-India relations seems clear. Shared concern about China binds the two countries together and ensures a prominent role for India in the United States’ Indo-Pacific policy. But for nearly three decades, the two sides have found common ground on everything from democracy and trade to, more recently, health and the climate crisis. That’s why high-level U.S.-India meetings have expansive agendas, including Sherman’s meetings this week.

Despite this momentum, a potential crisis looms. The United States could sanction India for its acquisition of Russian missile-defense technology. It’s very likely the Biden administration will grant India a waiver once the equipment starts arriving. But Sherman offered few assurances during her visit this week, calling India’s acquisition “dangerous and not in anybody’s security interest.”

Sherman arrived in Pakistan on Thursday, becoming one of the first high-level Biden administration officials to visit the country. Her two-day agenda focuses on Afghanistan and counterterrorism, and she will meet with senior officials as well as conduct media interviews and visit a U.N. High Commissioner for Refugees center.

It wasn’t always this way. Senior U.S. diplomats once branched out during their visits to Pakistan. As the Obama administration sought more cooperation from Islamabad in Afghanistan, it engaged in charm offensives. During visits in 2009 and 2010, then-U.S. Secretary of State Hillary Clinton participated in town hall meetings, met with students and business executives, and did interviews with journalists. Those visits touched on counterterrorism but also on energy and education.

The United States has long viewed its relationship with Pakistan through the lens of Afghanistan, and the issue will still determine its future after the U.S. withdrawal. Recent conversations with U.S. officials suggest Washington’s position toward the Taliban will considerably shape bilateral ties with Pakistan. If the United States doesn’t recognize the Taliban regime or engage with them, it may look to Pakistan as a key go-between.

The level of support Washington seeks from Islamabad for U.S. counterterrorism objectives will also be influential. If the United States wants intelligence-sharing arrangements and overflight rights from Pakistan, U.S. officials will have to make the relationship work. But if it finds solutions elsewhere—basing agreements in Central Asia or even intelligence support from the Taliban—a partnership will not appear as imperative to Washington.

Nonetheless, the United States and Pakistan have reasons for cooperating in the immediate term. Washington wants Islamabad to help press the Taliban to take more moderate positions on women’s rights and government inclusivity. And both countries need to develop a plan for assisting any Afghan refugees that have fled to Pakistan and seek U.S. special immigration visas because of their previous work with the U.S. military.

Ultimately, it is China that will cast a long shadow over the U.S.-India-Pakistan triangle. Beijing is a close ally of Islamabad and a bitter rival of Washington and New Delhi—ensuring smooth sailing on the U.S.-India side and choppy seas for the United States and Pakistan. In due course, there will likely be a reversion to the status quo in both relationships.

Oct. 7: Today marks the 20-year anniversary of the beginning of the U.S.-led war in Afghanistan.

Revelations about Pakistani politicians are particularly embarrassing for Islamabad because fighting corruption has long been the core plank of the ruling party. Those named include finance minister Shaukat Tarin and water resources minister Chaudhry Moonis Elahi. But the political damage to Pakistani Prime Minister Imran Khan should be minimal: He isn’t mentioned in the report, and he issued a strong statement vowing to conduct an investigation.

Others named in the Pandora Papers include: Indian cricket icon Sachin Tendulkar; corporate bigwig Anil Ambani; Sri Lankan businessman Thirukumar Nadesan, who has denied wrongdoing, and his wife, Nirupama Rajapaksa, a cousin of the Sri Lankan president; and Binod Chaudhary, Nepal’s only billionaire.

Indian farmers’ protests turn deadly. This week marked a dramatic escalation in the ongoing confrontation between the Indian government and farmers opposed to controversial agricultural laws. On Monday, eight people died in Uttar Pradesh state after a car owned by a senior government official, Ajay Mishra, plowed over protesters. The incident was the deadliest since the protests began more than a year ago.

Mishra, who wasn’t in the car, said his driver and four workers from the ruling Bharatiya Janata Party in the vehicle were later beaten to death by protesters. A police report alleges Mishra’s son Ashish was in the car’s passenger seat, and he fired a gun at protesters. Ashish, who was arrested this week, denies he was in the car.

The farmers’ protests have largely been peaceful, other than a clash in New Delhi in January that killed one protester and injured dozens more. But they now threaten to become more than a thorn in the side of Indian Prime Minister Narendra Modi’s government, which has both sought to negotiate with protest leaders and accused protesters of being part of a global conspiracy.

Afghanistan’s looming energy crisis. Weeks after the Taliban took power, Afghanistan could soon be plunged into darkness because it can’t pay its energy bills to international suppliers. Iran, Tajikistan, Turkmenistan, and Uzbekistan provide nearly 80 percent of Afghanistan’s electricity, and Afghanistan owes them more than $60 million. This week, an Afghan banking official warned that these countries could soon cut off supplies.

However, Afghanistan has made a request to the United Nations to help pay the bills. The energy payment problems predate the Taliban takeover: Afghan public utility officials have long struggled to collect payments from consumers. But part of the problem was attacks by the militant group, which imperiled energy security by blowing up electricity infrastructure. 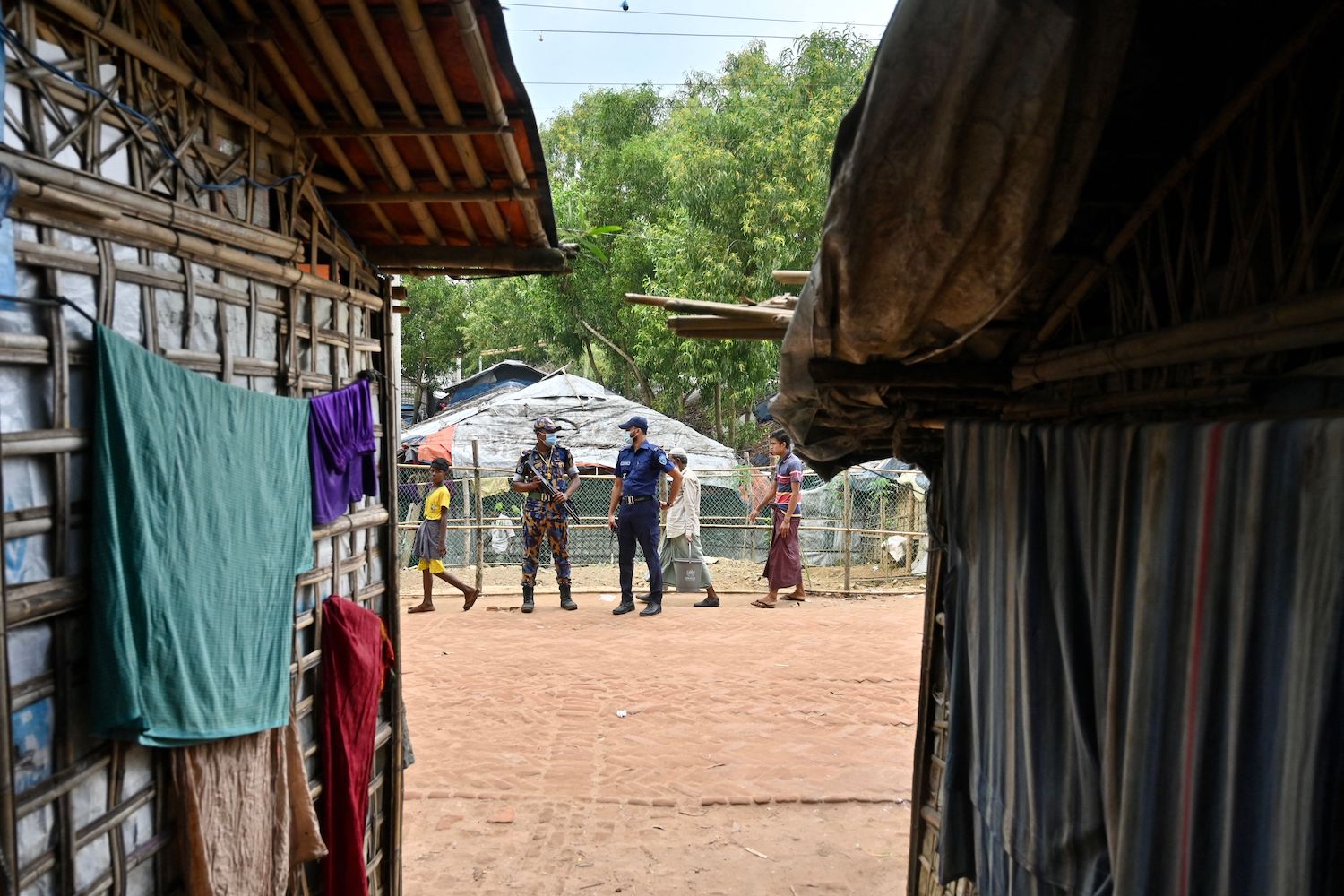 Rohingya advocate Mohib Ullah was assassinated in a refugee camp in Bangladesh on Sept. 29. He was a prominent voice with a global profile who had briefed the United Nations and visited the White House. Mohib Ullah had also documented Myanmar’s atrocities against the Rohingya minority in 2017 and sought guarantees for the safe return of Rohingya refugees to the country. His activism in the camps had previously led to death threats.

Witnesses said Mohib Ullah was meeting with a group of men when intruders stormed in and shot him. Rohingya refugees in Bangladesh—most of whom fled Myanmar in 2017—face difficult living conditions, but attacks like this one are rare. The investigating Bangladesh authorities said Myanmar may have had a hand in the killing, but much is unknown.

Another possibility is the assassins were Rohingyas who resented Mohib Ullah for his view that Rohingya refugees should be repatriated to Myanmar. One witness said the gunmen asked Mohib Ullah about his position on repatriation before executing him. Other observers have suggested the Arakan Rohingya Salvation Army, a militant group, was involved. (The group has denied that allegation.)

“You have got literally thousands of young people who have grown up with music, and they’re not going to be just kind of switched off like that.”

—John Baily, an ethnomusicologist at Goldsmiths, University of London, referring to fears that Afghanistan’s Taliban government will restrict nonreligious music

Journalist Arifa Noor, writing in Dawn, argues Islamabad’s decision to hold talks with the Pakistani Taliban is problematic. “At a time when the terrorist attacks are growing in number,” the announcement is “akin to an admission that the militants are now in a position of strength forcing the state to talk to them,” she writes. “Is this the message the government wants to give?”

In the Dhaka Tribune, public relations professional Yemad Fayed Ahmed writes about the reasons for Bangladesh’s struggling film industry. “Why do good movies not get the expected responses from audiences? Because directors don’t use the right promotional tools to promote their films,” he writes.

Member of Parliament Sasmit Patra argues in the Indian Express that India needs a better refugee policy—one that ensures transparency. “Treatment of refugees must receive the same attention that other rights protection issues receive,” he writes.

NEW FOR SUBSCRIBERS: Want to read more on this topic or region? Click + to receive email alerts when new stories are published on Foreign & Public Diplomacy, India, South Asia