It’s the latest sign there are few, if any, off ramps for NATO-Russia tensions.

Welcome to Foreign Policy’s SitRep! It’s Russian President Vladimir Putin’s 69th birthday today, and what better way to celebrate than by looking at 14 hairless cats that look like the Russian leader?

Alright, here’s what’s on tap for the day: NATO forces out Russian “diplomats,” Britain gets a new defense chief, and cold weather military competition heats up in the Arctic.

Welcome to Foreign Policy’s SitRep! It’s Russian President Vladimir Putin’s 69th birthday today, and what better way to celebrate than by looking at 14 hairless cats that look like the Russian leader?

Alright, here’s what’s on tap for the day: NATO forces out Russian “diplomats,” Britain gets a new defense chief, and cold weather military competition heats up in the Arctic.

NATO to Russian Diplomats: Pack Your Things and Go

It’s no secret NATO-Russia relations aren’t all that warm and cozy these days. But even in the toughest of times, including after Russia’s illegal annexation of Crimea and invasion of eastern Ukraine, they retained small forms of institutional cooperation to keep channels of communication going.

This week though, one of those channels was winnowed down even further. A NATO official confirmed to SitRep that the alliance is kicking out eight Russian officials from Moscow’s diplomatic mission to NATO and halving the number of posts at that mission to 10.

What’s the cause? NATO accused those officials of being spies, but it’s still unclear what the catalyst for the latest action was.

“We have withdrawn the accreditation of eight members of the Russian Mission to NATO, who were undeclared Russian intelligence officers,” the NATO official said. “We can also confirm that we have reduced the number of positions, which the Russian Federation can accredit to NATO to 10.”

The last time this happened was in 2018, when NATO cut the size of the Russian delegation at its mission from 30 to 20 people, in response to Russian intelligence agents poisoning former double agent Sergei Skripal in the United Kingdom.

Spy games. Several seasoned European diplomats told SitRep it was an open secret that at least some (if not most) of the Russian officials at NATO’s Russian mission were spies, but it was tolerated because there needed to be some points of contact between the former Cold War rivals as tensions flared up over Ukraine and Russia’s efforts to undermine elections in the West.

The NATO official said the alliance remains “open for a meaningful dialogue” with Russia. Don’t hold your breath.

But it’s not for a lack of trying. Theoretically, there are some small openings for cooperation on specific issues despite the toxic state of the relationship, such as arms control and terrorism.

NATO Secretary-General Jens Stoltenberg met with Russian Foreign Minister Sergey Lavrov last month in a testy meeting on the sidelines of the United Nations General Assembly. In recent weeks, the Biden administration has also broached the idea of cooperating with Russia on counterterrorism in Afghanistan after the U.S. withdrawal, including on Russian-run bases in Central Asia.

It’s become a difficult balancing act for NATO to maintain, standing up to Russia while also keeping channels of communication open, said Rachel Rizzo, an expert on transatlantic security with the Truman National Security Project. “This is a meaningful step in response to Russia’s continued malign activities. I think the question becomes: What happens now, and how will the Kremlin respond?”

This latest move doesn’t bode well, however. According to Christopher Skaluba, a former longtime Defense Department official now at the Atlantic Council, the move “seems to suggest whatever small opening might have been there for NATO to open up broader or more routine dialogue with Russia is probably gone.”

“You’re not taking an action like this if you’re on the cusp of improving dialogue with Moscow on any issues,” he added.

Diplo-nerds rejoice! Our newest deputy editor, Jennifer Williams, is hosting a new podcast for FP that is going to be, dare we say, as awesome as she is.

It’s called The Negotiators, and each episode will put listeners in secret negotiating rooms for high-stakes diplomatic deals (like what went down behind closed doors during the Iran nuclear deal or hostage negotiations) with one negotiator who was in the room when it happened. It’s coming soon, so subscribe here.

British Adm. Tony Radakin is the new chief of defense staff in the United Kingdom, according to a government press release. He has been chief of naval staff for the past two years and will take over as Britain’s top military officer from Gen. Nick Carter at the end of November. Radakin is the first admiral to head the defense staff since 2001, portending a possible naval focus in the British military’s future. Kudos to the Telegraph for first reporting it.

Judd Devermont, a former senior U.S. intelligence official and director of the Africa program at the Center for Strategic and International Studies, is joining the National Security Council to help craft U.S. President Joe Biden’s Africa strategy, as Robbie scooped this week.

Biden has tapped James O’Brien to be the State Department’s coordinator for sanctions policy, pending Senate confirmation. O’Brien was the first special envoy for hostage affairs between 2015 and 2017 during the Obama administration.

Eyes up north. Speaking of fun developments between West-Russia relations, things may be heating up again between geopolitical rivals in the Arctic. Russia is considering establishing an entirely new division of its navy, the Arctic Fleet (separate from its Northern Fleet), as Russian state news agency TASS reported on Thursday, citing an unnamed source in the Russian Navy. Tensions farther south and rapidly receding northern ice caps have fueled new debates over which countries can operate where in the melting Arctic region, and it’s increasingly becoming a new point of tension between NATO and Russia.

AUK-ward look. Some of the harshest words for the trilateral nuclear-powered submarine partnership between the United States, Australia, and the United Kingdom (known by the acronym AUKUS) is from former Australian Prime Minister Malcolm Turnbull. He’s worried Australian Prime Minister Scott Morrison flat out deceived the French by tearing up a deal for diesel-electric submarines, saying Australia’s politics and lack of a civil nuclear industry could make the partnership tricky. “My concern is that it just won’t happen,” he told Foreign Policy. “That we’ll end up with nothing.”

China, China, China. The CIA is creating a so-called China Mission Center to beef up its focus on Beijing, the three-letter agency announced today. The new center will focus exclusively on gathering intelligence about China, an effort that will include adding more officers, linguists, technicians, and specialists worldwide, a senior CIA official told the Washington Post. The effort follows the State Department’s move to carve out an internal “China House” that will also monitor China’s activities in specific countries, as we first reported last month. 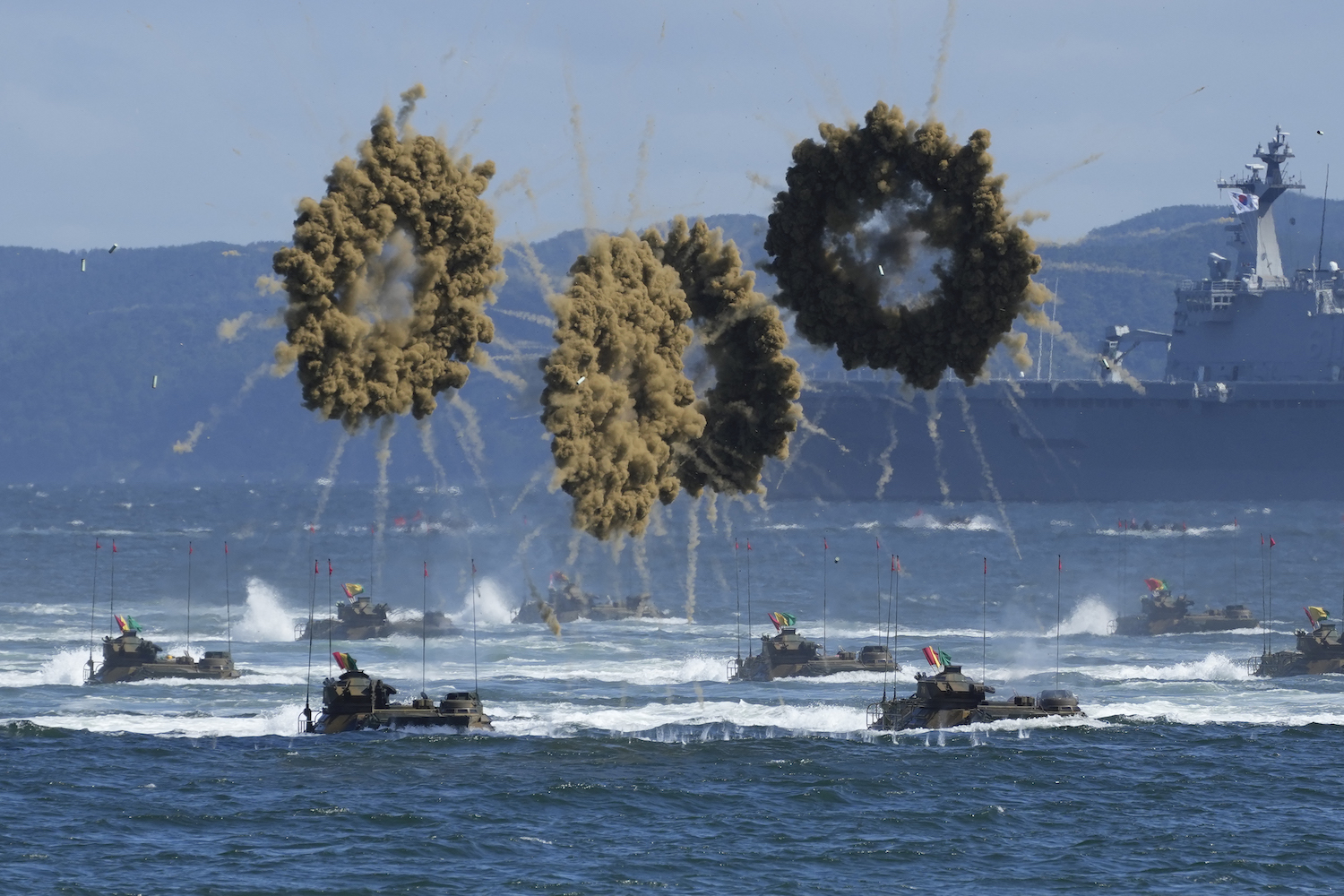 Taiwan-na fight? Ok, we know there’s a lot about China in here, but this is a wild scoop from the Wall Street Journal. It turns out U.S. troops have been secretly deployed to Taiwan for at least a year to help train the island’s military, which has faced repeated air incursion threats from Chinese bombers and fighter planes. A special operations unit is conducting training for ground forces while U.S. Marines deployed to the island are assisting with small boat training.

“Take a look at how we vote. This is a 10-minute vote—it takes 45 minutes. I’m going to tell you, at elementary school, they didn’t do that shit.”

—Montana Sen. Jon Tester compares working in Congress to his last job as a music teacher at an elementary school in a Politicoprofile.

Not a bad trade. U.S. soldiers guarding Kabul’s airport during the chaotic Afghanistan evacuation traded two cans of dipping tobacco with Afghan troops for a Toyota mounted with an anti-aircraft gun. Credit to Pfc. Alsajjad Al Lami of the 1st Battalion, 504th Parachute Infantry Regiment for making the trade and to Task and Purpose for reporting the story.

You are commenting as . Change your username | Log out
Tags: Europe, Foreign & Public Diplomacy, NATO, Russia

NEW FOR SUBSCRIBERS: Want to read more on this topic or region? Click + to receive email alerts when new stories are published on Foreign & Public Diplomacy, Russia, Europe