Hips Don’t Lie (and Neither Do Receipts)

The Pandora Papers, the latest megaleak about the offshore financial universe published by the International Consortium of Investigative Journalists (ICIJ), put Latin America and the Caribbean in the spotlight. Of the 14 legal- and financial-service companies whose files were leaked to the ICIJ, eight are in the region. Fourteen of the 35 current and former heads of state named in the data dump are from Latin American and the Caribbean.

According to the documents, Ecuadorian President Guillermo Lasso has had ties to 10 offshore companies and trusts in Delaware, Panama, and South Dakota, while the children of Chilean President Sebastián Piñera used an offshore company to sell shares of a mining project planned for Chile’s north-central coast in 2010, during a previous Piñera presidency. The reports also linked Dominican President Luis Abinader to two offshore companies in Panama.

Other high-profile names include those of Brazilian Finance Minister Paulo Guedes and Colombian pop star Shakira, who also currently faces criminal charges for around $16.8 million in tax evasion in Spain, where she lives. Now, the Pandora Papers have found Shakira’s name on application forms from 2019 related to three firms in the British Virgin Islands. Her lawyers said Spanish tax authorities were aware of the companies. Shakira was not alone: Several other Latin American artists—including Alejandra Guzmán, Chayanne, and Luis Miguel—were also named in the Pandora Papers.

Vows of government investigations into the Pandora Papers’ revelations have been swift. Officials in Mexico and Panama said they would inspect citizens cited for evidence of illegalities. In Chile, opposition parties vowed to launch an impeachment probe into Piñera for allegedly using a policy decision he made as president to earn profits for his family. Opposition parties in the Dominican Republic called for an investigation into Abinader. And Brazil’s Congress subpoenaed Guedes about an offshore company detailed in the documents. (In draft legislation to reform Brazil’s tax code, Guedes recently oversaw the removal of a proposed new tax on offshore assets.)

Piñera, Lasso, Abinader, and Guedes, for their parts, said their actions detailed in the reports were legal. “Being president has brought me more losses than benefits,” Piñera said.

But observers say it’s precisely the legality of stashing money offshore—where it often qualifies for low to no taxes—that is the scandal.

“We live in a legal system that allows the rich and the elite to choose which taxes they want to pay,” Mexican political scientist Viridiana Ríos wrote in El País.

Some 27 percent of Latin American wealth is stored in offshore accounts, economist Gabriel Zucman at the University of California, Berkeley, estimated in 2017. That’s compared to 11 percent for Europe and 4 percent for Asia and the United States. Keeping the money offshore causes yearly tax revenue losses of over $21 billion across the region, Zucman calculated.

Latin America remains one of the world’s most unequal regions. Tax evasion is one factor behind its countries’ low levels of tax revenue collection when compared with their annual GDP, researchers wrote in a July report for the OECD.

In her opinion piece, Ríos wrote that a real fix requires not just the pursuit of the individuals named in the Pandora Papers but significant changes to the tax code itself. Mexico’s Congress is currently considering reforms that top tax official Raquel Buenrostro said would “disincentivize aggressive planning” to find ways to pay fewer taxes. Though new taxes on offshore assets under Guedes seem unlikely in Brazil, in neighboring Colombia, 2022 presidential front-runner Gustavo Petro called Sunday for raising taxes on the unproductive assets of the rich.

If the past is any indication, any reform will likely be slow. A similar ICIJ megaleak in 2016, the Panama Papers, did not lead to a regulatory sea change in the region. In fact, the Pandora Papers show, soberingly, that over 500 British Virgin Islands shell companies documented five years ago simply transferred their management away from the specific law firm named in the Panama Papers to other, similarly shadowy firms.

But the Pandora Papers also demonstrate how regulations can make a difference. The reports revealed that Lasso had dissolved eight of his offshore companies by 2017. That move was the result of a new Ecuadorian law against elected officials holding investments in countries considered tax havens, which had been proposed in the wake of the Panama Papers scandal. In a referendum, Ecuadorians approved it by 54 percent.

Thursday, Oct. 14: The United Nations Security Council is set to adopt a resolution on the U.N. mission in Haiti and hold a briefing followed by consultations on Colombia.

Teen smugglers. The U.S. Justice Department has a long-standing practice of not prosecuting Mexican minors for smuggling migrants to the United States, which has led some teens to specialize in the role. The Washington Post profiled one such smuggler, whose middle name is Antonio, and who had been caught 15 times.

As his 18th birthday—and with it, the possibility he could earn a U.S. jail sentence for smuggling—approaches, Antonio is grappling with the choice of how to respond to recruitment efforts from a local cartel. The cartels that control migrant smuggling often work with teen smugglers before their 18th birthdays, then try to place them in roles such as drug traffickers or hit men when they reach adulthood.

The local government in Matamoros, where Antonio lives, has started a program to try to draw teens away from smuggling by connecting them with a path to a high school diploma, jobs to replace smuggling income, and even a soccer team. But jobs in local auto plants earn around a dollar per hour, compared to some $1,000 per day smuggling migrants, the Post reported. 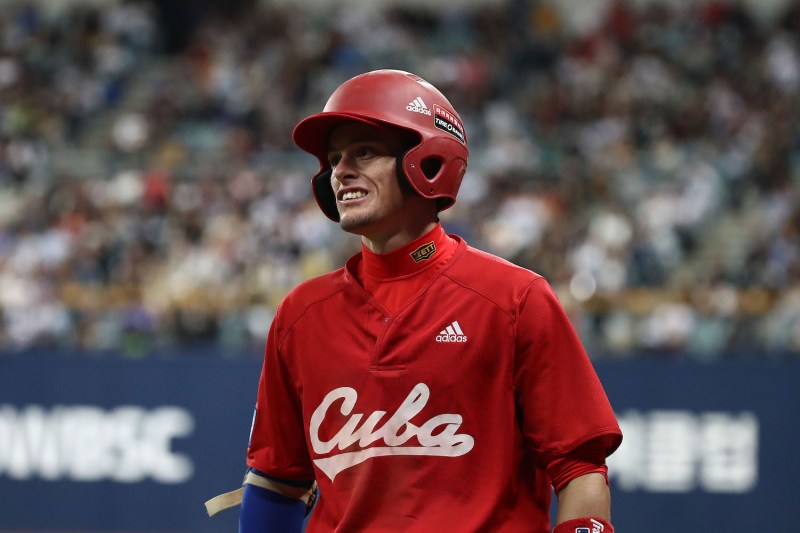 Cuban baseball player César Prieto reacts after being grounded during a game between South Korea and Cuba at the Gocheok Sky Dome in Seoul on Nov. 8, 2019.Chung Sung-Jun/Getty Images

Cuban defectors. Over the course of almost two weeks in late September and early October, 12 Cuban baseball players from the country’s under-23 national team escaped while on a trip to Mexico, where they were playing in the Under-23 Baseball World Cup tournament, Francys Romero reported this week for El Estornudo. The Cuban government acknowledged nine had fled. Little has been reported about their current status.

The team’s size in the tournament dwindled by the day. Romero, who has covered such defections over the years, says it was the largest recorded defection by Cuban athletes since the start of the phenomenon in 1991. The defections “speak, above all, to the scarce horizon of both political and economic opportunities for Cuban citizens,” he wrote.

Prison riots. Ecuadorian authorities are considering pardoning up to 2,000 elderly or disabled prison inmates in an effort to reduce overcrowding after 118 people died in a prison riot in the port city of Guayaquil last week. Analysts attribute the violence to rising gang competition for drug routes and overcrowding. Ecuador’s jails are at around 130 percent capacity, according to government statistics.

Without WhatsApp. Monday’s hourslong Facebook outage shook Latin American small businesses and government officials that rely heavily on its subsidiary WhatsApp to communicate. Around a quarter of all WhatsApp downloads since 2014 were in the region, according to the data firm Sensor Tower.

In Brazil—where a 2019 survey found 81 percent of people with a smartphone check WhatsApp at least once an hour—comedian and composer Marcelo Adnet met the moment by composing a samba song about the outage and posting it to Twitter.

“My God, I’m tweeting,” he sings, “Can everyone see this?” He continues, “I will wait until tomorrow to send you a really long audio message.”

The Pandora Papers’ methodological predecessor, the Panama Papers—published in 2016—were based on files leaked from one Panamanian law firm. Once thought to be the world’s fourth-largest provider of offshore accounts, it closed its doors in 2018.

What is the firm’s name?

The other firms are all involved in the Pandora Papers leak. 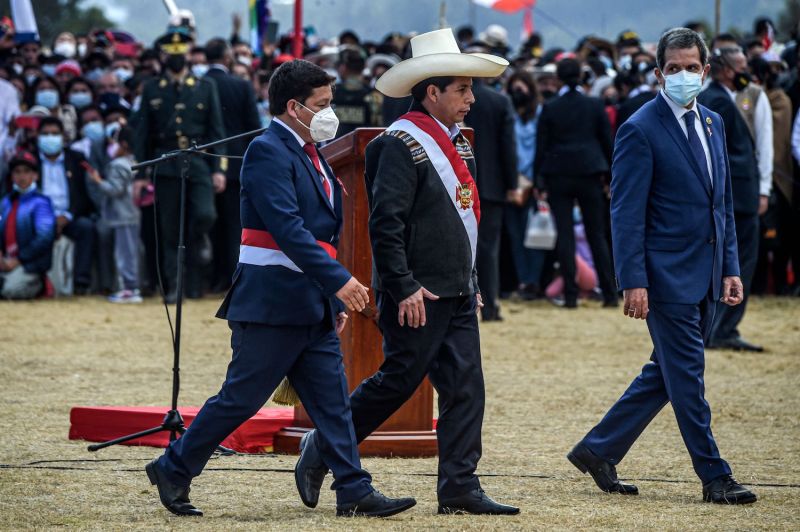 When Peru’s left-wing President Pedro Castillo was inaugurated in July, observers had one big question: How much would the boss of Castillo’s Perú Libre party, Vladimir Cerrón, be pulling the strings in Castillo’s administration?

While Castillo’s anti-establishment message and background in union organizing matched Peru’s moment of discontent in the April general elections, it was the infrastructure of Cerrón’s party that helped take Castillo over the finish line in a contentious June runoff against right-wing candidate Keiko Fujimori.

As the party’s general secretary, Cerrón has molded Perú Libre around a confrontational Marxist-Leninist approach. That vision was embodied in Castillo’s choice for prime minister, Guido Bellido. But Bellido and Castillo have clashed in recent months as Castillo aimed to toe a more moderate line and cultivate stable relations with international investors.

On Wednesday, Castillo finally asked Bellido to resign “in favor of governability” and replaced six other cabinet members as well. As Bellido’s replacement, Castillo named moderate leftist Mirtha Vásquez, of the Frente Amplio party, who served as president of Congress for part of last year.

The other new cabinet members include businessman Eduardo González as minister of energy and mines, and human rights activist Gisela Ortiz as minister of culture. Moderate Finance Minister Pedro Francke remains in his job. Overall, the changes bring the number of women in Peru’s cabinet from two to five.

While Castillo said the shuffle marked the start of a new phase of his government, Cerrón called it a betrayal, saying his party does not support the new cabinet. Still, some individual Perú Libre members, such as lawmakers Óscar Zea and Roberto Kamiche, spoke up in favor of the changes. And not all of Cerrón’s close circle was thrown out of the cabinet: Castillo appointed Luis Roberto Barranzuela Vite, a lawyer who recently represented Perú Libre, as interior minister.

NEW FOR SUBSCRIBERS: Want to read more on this topic or region? Click + to receive email alerts when new stories are published on Economics, North America, South America