Turkish officials want their just deserts for doing work on the F-35.

Welcome to SitRep! My partner-in-crime, Robbie Gramer, is out enjoying the bliss of married life on the California coast this week. It’s Thursday, so if you’re feeling stressed—or a little hungry—might we recommend this video of a cute monkey making green bean salad?

Here’s what’s on tap for the day: More drama between Turkey and NATO, the Democratic caucus in Congress jousts over U.S. President Joe Biden’s Taiwan policy, and the private Afghan evacuation effort trudges on.

Welcome to SitRep! My partner-in-crime, Robbie Gramer, is out enjoying the bliss of married life on the California coast this week. It’s Thursday, so if you’re feeling stressed—or a little hungry—might we recommend this video of a cute monkey making green bean salad?

Here’s what’s on tap for the day: More drama between Turkey and NATO, the Democratic caucus in Congress jousts over U.S. President Joe Biden’s Taiwan policy, and the private Afghan evacuation effort trudges on.

U.S. Secretary of Defense Lloyd Austin was probably hoping for a no-drama visit to NATO’s headquarters in Brussels today, the last leg of his four-country trip through Europe. And there was bonhomie to go around, with handshakes, shoulder slaps, and a “family photo” with European defense chiefs. (The delegation of traveling press was herded into another room.)

But even as Austin and the Biden administration have wanted to pivot these kinds of meetings to the Defense Department’s priority (China), two topics have continued to dominate: the chaotic U.S. withdrawal from Afghanistan, which left European allies scrambling to get their diplomats and troops out of the country, and Turkey’s role, an ally that houses U.S. nuclear weapons and NATO early warning systems that is also engaging in a dangerous courtship with Russia.

Have it both ways. No, not a lot has changed since Turkey bought the Russian S-400 air defense system, forcing the United States to pull Ankara out of the F-35 fighter jet program. Turkey remains under U.S. sanctions, which officials at the time said were designed not to tip over the tepid Turkish economy.

But Turkish officials still want their just deserts for doing work on the F-35, which included helping design part of the fuselage. Specifically, they’re asking the United States for F-16 fighter jets that will help them backfill the gap left by the F-35’s loss. And if those U.S. warplanes aren’t delivered, Turkey’s top defense industry official, Ismail Demir—one of the officials blacklisted for the S-400 purchase—threatened to buy Russian fighter jets instead. (Reuters first reported that Turkey had asked the United States for 40 F-16 jets.) The Pentagon remains stuck in talks with Turkey’s government about how to resolve the F-35 dispute.

Under the surface. Not all of these tensions were on display in Brussels today. Ironically, as the relationship has gotten frostier, Turkish Defense Minister Hulusi Akar has developed a reputation for being the easiest Turkish official to deal with, former officials and experts told Foreign Policy. But the relationship is definitely in trouble, and Biden has responded by giving Turkish President Recep Tayyip Erdogan and other top officials very little face time.

The tussling over fighter jets could make an already strained dynamic among NATO allies even trickier to navigate.

Biden has tapped Donald Armin Blome, a career foreign service officer, as his nominee for U.S. ambassador to Pakistan.

Peter Beshar is the White House’s nominee to be the Air Force’s general counsel.

Four more Biden nominees for top Pentagon jobs went through Senate confirmation hearings on Tuesday: Deputy Undersecretary of Defense for Policy-designate Sasha Baker; Biden’s pick as Navy general counsel, John “Sean” Coffey; Doug Bush, named as assistant secretary for the Army for acquisition, technology, and logistics; and Nickolas Guertin, who would be director of operational test and evaluation at the Pentagon. All four are now awaiting the committee’s OK and approval from the full Senate.

The Senate Foreign Relations Committee isn’t able to sign off on Barbara Leaf, Biden’s nominee to head up Middle East policy at the State Department, due to a hold from Republican Sen. Ted Cruz of Texas, who said the retired diplomat did not satisfactorily answer a handful of written questions, according to Politico. Leaf is currently the second ranking Middle East official on the National Security Council.

What should be on your radar, if it isn’t already.

Testing patience. China conducted not one but two hypersonic weapons tests this summer, the Financial Times reported on Wednesday. Pentagon officials were stunned with the progress Beijing has made with these futuristic weapons, which are more adept than ballistic missiles at evading missile defenses because of their low-flight profiles. One of the sources interviewed for the Financial Times story said U.S. officials are still struggling to understand how China achieved this capability, which the United States does not have.

Pressure cooker. Biden is being sandwiched between moderates and progressives in the Democratic caucus on Taiwan. The two flanks are at odds over whether to give the White House more authority to intervene if China mounts a military incursion of the island. I reported that House Armed Services Vice Chair Rep. Elaine Luria, a Virginia Democrat, is pushing for a law that would give Biden the ability to declare a snap defensive operation if China invades. Progressives are worried this might upset the U.S. policy of “strategic ambiguity” regarding how the United States would respond to a cross-strait incursion.

“A policy of ambiguity may not be the most emotionally satisfying for D.C. hawks, but it’s working,” said Matt Duss, an aide to Sen. Bernie Sanders.

Party crashers. Some countries with checkered democratic records are getting invites to Biden’s upcoming December virtual democracy summit, Foreign Policy’s Amy Mackinnon reports. The invitees include Poland, Mexico, and the Philippines. Biden administration officials said they want to lure nations at risk of backsliding into the fold once more.

“What we’re trying to do through the Summit for Democracy is to galvanize democratic renewal worldwide,” said a senior administration official, speaking on background on the condition of anonymity. “Because of that, we’re seeking a really inclusive, big-tent approach.” 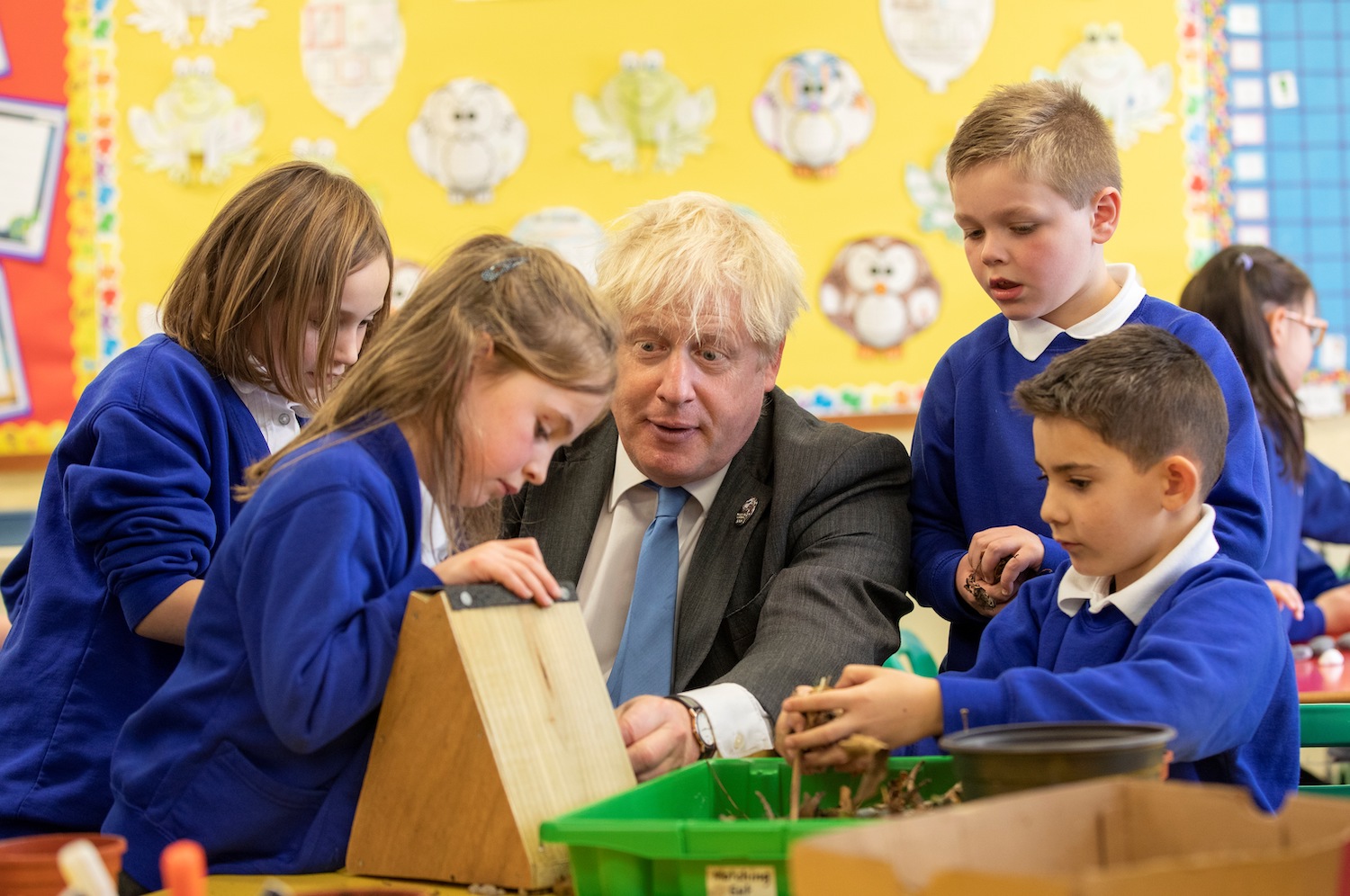 British Prime Minister Boris Johnson joins schoolchildren as they make a bug hotel during a visit to Crumlin Integrated primary school after attending a service to mark the 100th anniversary of the creation of Northern Ireland in County Antrim, Northern Ireland, on Oct. 21. Paul Faith/WPA Pool/Getty Images

The Escape Artist. In 2008, an Afghan interpreter saved Army advisor Matt Zeller’s life when his unit was ambushed by Taliban fighters. In the years since, Zeller has been helping to spearhead a group of fellow veterans, volunteers, ex-diplomats, and citizens evacuating as many Afghan interpreters and refugees as possible.

In the first in a series of FP Interviews profiling newsmakers in national security, I look at Zeller’s round-the-clock efforts to get vulnerable Afghans out of the country as the Taliban advanced—and hear the story of a man who made a 250-mile trip to Kabul under the cover of a burqa.

“Is there a problem with the Northern Irish protocol? Yes, there is—but we’ll fix that. I don’t think that’s going to be the end of the world.”

On the loose. The Maryland owner of multiple escaped zebras that have been wandering the Washington suburbs is facing criminal charges after one of the animals perished while on the run. Jerry Lee Holly, 76, faces multiple criminal charges from Prince George’s County, Maryland, for animal cruelty after one of his loose zebras was caught in a snare and likely died of dehydration.

You are commenting as . Change your username | Log out
Tags: Military, Russia, Security, Turkey

NEW FOR SUBSCRIBERS: Want to read more on this topic or region? Click + to receive email alerts when new stories are published on Military, Security, Russia