Global supply chains are clogged up amid booming consumer demand—and are expected to remain that way through the holidays—and many of the bottlenecks are in China. Smaller companies have reported up to nine-month fulfillment delays on orders from China, while larger ones are struggling to keep shelves filled in the United States.

One reason for the slowdown is the surprising resilience of both U.S. consumption and Chinese production after the coronavirus pandemic began. The U.S. recession that followed was relatively short, and wealthier Americans are now spending wildly. Chinese manufacturing also recovered faster than expected from its crisis period early last year. But shipping companies had already cut their schedules, causing disruptions that are still reverberating through the overstretched global system.

A shortage of shipping containers, which are critical to modern supply chains, is contributing to the disruptions. The containers normally circulate worldwide, but many are now stuck in North America: For every 100 containers that arrive there, only 40 are sent back to Asia or Europe. Excess containers are piling up in Los Angeles and other U.S. ports while Chinese suppliers fight for them. It will take months before container manufacturers in China ramp up to meet demand.

Another factor is China’s fear of reintroducing the coronavirus. COVID-19 rules, such as the recent lockdowns in Vietnam, have disrupted shipping worldwide. But the issue is particularly acute in China, where most foreign travel remains off-limits, including a lot of outbound travel. (The Chinese authorities have been relatively flexible in accepting valid reasons for trips.) Ports are especially sensitive spots, with regular shutdowns for mass testing in the case of infected personnel.

In August, the Port of Ningbo—the world’s third busiest—was closed over a single COVID-19 case, after the Port of Yantian—the world’s fourth busiest—shut down in May and June due to 150 cases. Chinese restrictions are part of the wider crew change crisis that has left ship crews stranded around the world, with at least 1,000 merchant sailors abandoned entirely, thanks to a badly regulated and exploitative industry.

Moreover, Chinese manufacturing has struggled in 2021, despite its surprisingly strong recovery last year. Recent power shortages are part of the problem, but growing labor shortages may present a more permanent problem. COVID-19 restrictions have made travel harder for many migrant workers who once moved regularly in search of work, especially those who lack proper identification. But China also faces a demographic crisis, as its working-age population continues to shrink after its peak in 2011.

In the long term, the demographic challenge is likely to drive diversification of the supply chain away from China—both for economic reasons and because it will lend more weight to existing concerns about security and political vulnerabilities. In the short term, don’t bet on getting what you wanted for the holidays.

No Xi in Glasgow. As the U.N. Climate Change Conference (COP26) in Glasgow, Scotland, approaches, it seems very unlikely that Chinese President Xi Jinping will be there. That doesn’t mean Beijing isn’t taking the conference seriously—Xi hasn’t left the country since the pandemic began, either out of fear of infection or fear that his absence may present an opportunity for rivals at home. A video appearance by Xi, alongside other claims of support for the COP26 agenda, is likely.

However, the ongoing power shortages have complicated China’s existing climate plans. It still hasn’t submitted its emissions reduction targets, potentially embarrassed by increases in coal production and consumption forced through in the last two weeks to cope with the energy crisis.

China is the world’s largest carbon emitter, in large part from the activities of state-owned industries. Despite the persistent delusions of U.S. climate negotiators, Beijing’s climate policy is unlikely to be affected by anything Washington does. The determining factors are instead domestic: the political heft of state-owned firms and the need to balance the needs of a developing economy against the desire not to see the coastline sink—within the constraints of a system that’s often just as incapable of long-term thinking as the United States.

Delta variant flare-ups tighten COVID-19 rules. An outbreak of delta variant cases in China, mostly linked to travel during holidays earlier this month, has caused another round of travel regulations. The numbers—just 160 cases in this outbreak—would be trivial in many other countries. But China is still trying its best to stick to its “zero COVID” strategy amid concerns that the delta variant could undermine its domestically produced vaccines; this latest outbreak means lockdowns, mass testing, and even more restrictions to protect the leadership in Beijing.

Hong Kong has also adopted increasingly tight measures, despite very low case numbers. Even for long-term residents, returning to Hong Kong from overseas is extremely difficult—not just because the required quarantine period but also because flights are frequently canceled. That is yet another factor driving business out of the beleaguered city.

Young Chinese seek official jobs. A record 2 million applicants have registered for the Chinese civil service examinations next month, the first stage in a conventional career as a government official. (There are other routes in for the well-connected.) That is up from 1.5 million applicants last year, which was already a record, illustrating the growing trend of young Chinese seeking official jobs rather than employment in the private sector.

Under Xi, China has followed a consistent pattern of “the state advances, the private sector retreats”—a slogan originally coined to describe state-owned enterprises’ advances that is now ideologically pushed from the top. It’s not surprising that a cynical generation of young people are seeking the comfort and stability of government positions. It also suggests that despite a decade of anti-corruption campaigns, the official and unofficial perks of government jobs remain substantial.

United States kicks out China Telecom. In a long-expected move, the U.S. Federal Communications Commission (FCC) unanimously agreed to rescind the license for the state-run firm China Telecom to operate in the United States, citing security risks. The Biden administration hasn’t shown the same level of enthusiasm as its predecessor for picking new Chinese technology targets, but it hasn’t backed off, either.

As the FCC vote and other reports show, anti-Chinese Communist Party (CCP) action remains one of very few areas of strong bipartisan agreement in Washington.

Property tax pilots. China is planning limited property tax pilot programs over the next five years, but it doesn’t seem like a sign of strength on the government’s part when it comes to popping the property bubble. Instead, it’s a weak and diffuse move that kicks the can down the road yet again. China has carried out property tax pilots for more than a decade. Repeating the process rather than using the earlier programs as models to introduce a national tax is disappointing, especially in the face of a growing property crisis.

But China’s upper-middle classes, the mainstay of CCP support, are all-in on property investments—and anything that threatens their prosperity threatens the party, too.

Alibaba down $344 billion. The Chinese government’s regulatory war on the online giant Alibaba started this time last year after its charismatic founder, Jack Ma, criticized regulators. Since then, Ma has virtually disappeared from public life, Alibaba’s financial arm has seen its initial public offering blocked, and the technology sector has become the target of an ideological and regulatory frenzy. Shareholder value has plummeted, to the tune of $344 billion.

The Alibaba case serves as a reminder that Beijing can wipe almost any company based in China, or that has substantial dealings in China, at its whim. The recent arguments of a few Western investors that the storm is over and won’t affect other sectors are mistaken. 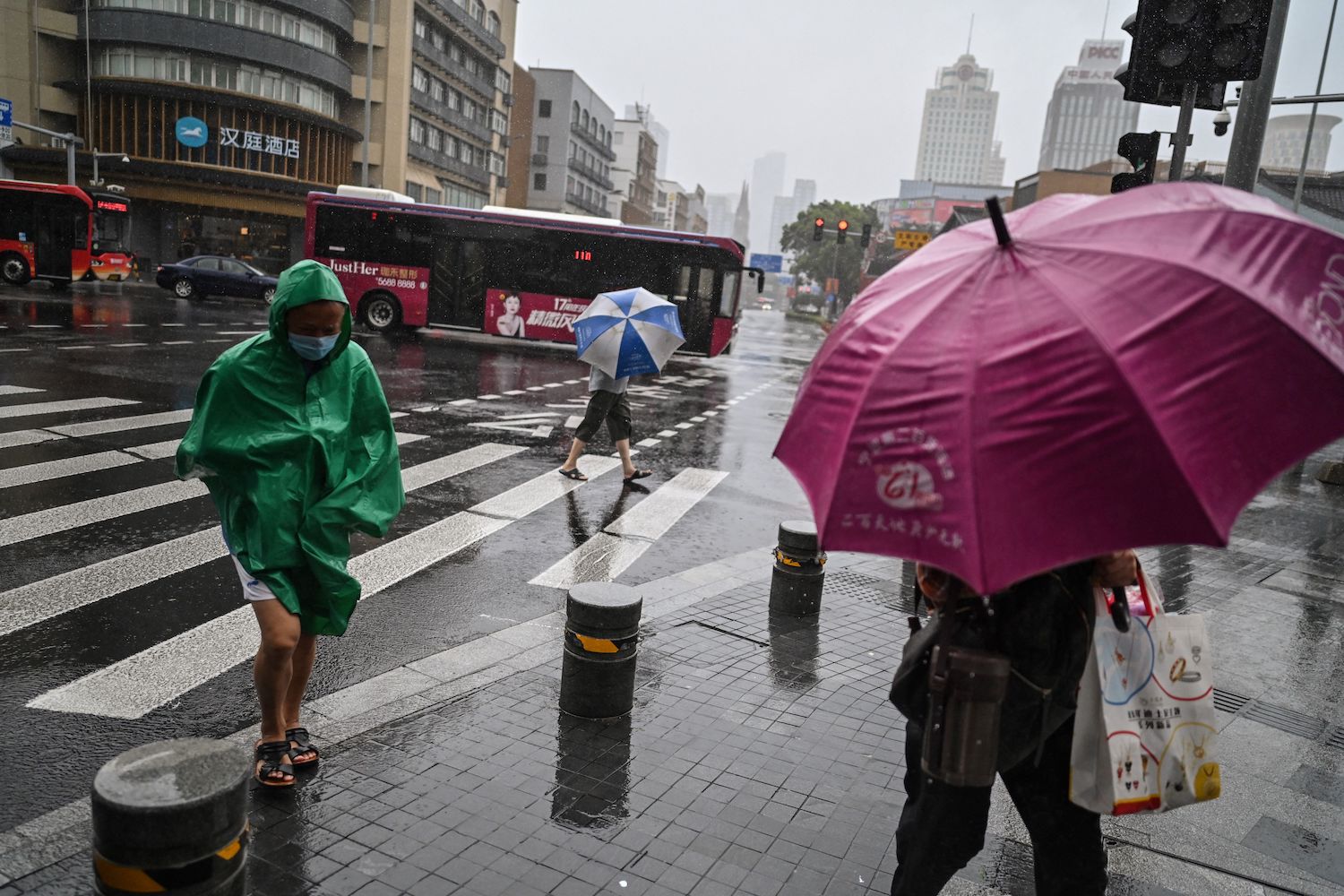 People walk with an umbrellas amid inclement weather in Ningbo, China, on July 25.HECTOR RETAMAL/AFP via Getty Images

You can’t escape the smell of Ningbo. Near the coastline, it’s the scent of the sea, and elsewhere it’s the city’s famous affinity for stinky food. Ningbo’s cuisine is built around preservation and fermentation in brine and a consequent pride in pungent odors, especially the so-called three stinks of wax gourd, amaranth stalks, and taro. The tradition goes back a long time: The first settlers of Ningbo were fishers and beachcombers who left behind mounds of shells 8,000 years ago.

Ningbo has been an international port for more than 1,000 years, hosting a small but important Arab and Persian trading community and seeing visitors from across South and Southeast Asia. The Portuguese reached the city in 1522; like others, they alternated between trading and raiding. Wealthy families, flush with the profits of trade, clustered around the city’s Moon Lake, an artificial reservoir that still survives as a tourist attraction.

Today, Ningbo is China’s second most important port and the third busiest in the world. The port district and its warehouses sprawl for miles, including one of the world’s longest sea bridges, which links the city to Shanghai. Like other ports, land reclamation is a big deal in Ningbo. So is the effort to preserve the city’s wetland ecosystem that has made its unique cuisine possible.

You are commenting as . Change your username | Log out
Tags: China, Economics