Is Biden’s European Honeymoon Over?

Can the U.S. president get relations with Europe back on track?

When Biden began his presidency nine months ago, U.S. partners and allies were still reeling from the images of a pro-Trump mob storming the U.S. Capitol. Even though Biden had friendly ties with many European leaders from his nearly five decades in public service as vice president and the Senate’s top voice on foreign affairs, restoring American prestige looked like a major reclamation project.

It still is. Biden departs Washington for Europe today on his second foreign trip as commander in chief, making a stop at the G-20 summit in Rome before heading to Glasgow, Scotland, for the United Nations climate summit, known colloquially as COP26.

Climate, climate, climate. Yeah, yeah, we know: One of Biden’s first actions as president was to return the United States to the Paris Agreement.

But it’s not as simple as it looks. Even though Chinese President Xi Jinping isn’t likely to show up to the event, Beijing’s carbon emissions—especially from burning coal—are likely to be the talk of the town as Biden looks to get countries to put more legal weight behind the Paris deal’s target to keep the global temperature rise under 2 degrees Celsius, which is above pre-industrial levels.

There are two sides to the Biden administration’s dealings with China though. It’s a riddle, wrapped in a mystery, inside an enigma.

As the Washington Post reported on Monday, the desire to seek out a climate accommodation with China has become the cause of significant heartburn within the administration: “Doves” like climate czar John Kerry have sought to find common ground on global issues like climate change while “hawks” like National Security Advisor Jake Sullivan and the National Security Council’s Asia chief, Kurt Campbell, want to ramp up the United States’ tough talk on Beijing as China recently used military exercises to threaten Taiwan.

Why can’t we be friends? The trip will also be a chance for Biden to smooth over U.S. relations with France after the so-called AUKUS submarine deal in September caught Paris by surprise and briefly led the French to recall their U.S. ambassador. (He has since returned to his post.) Biden and French President Emmanuel Macron will meet face to face during the trip, and both sides will be looking to carve out a role for France in the Asia-Pacific.

“The recent diplomatic row between Paris and Washington was more than just a dispute over the loss of a lucrative submarine contract,” wrote Pierre Morcos, a French diplomat serving as a visiting fellow at the Center for Strategic and International Studies, a Washington think tank, in the National Interest this week. “French authorities have seen the Biden administration’s lack of transparency and genuine consultation as a ‘breach of trust’ with broader implications for the transatlantic alliance as a whole.”

With German Chancellor Angela Merkel leaving the European political scene, the meeting will also be a chance for Macron to assert himself as the face of the European Union bloc.

Cindy McCain, the wife of late Republican Sen. John McCain, was confirmed by the Senate this week to be the next U.S. ambassador to the Rome-based U.N. Food and Agriculture Organization.

Dozens of other ambassador nominees remain stuck in the Senate thanks to a blanket hold from Republican Sen. Ted Cruz over disagreements on national security policy with Biden.

Going nuclear. The Air Force has finalized tests for the F-35 fighter jet to carry nuclear weapons, according to the Air Force Times. Two F-35s conducted flights with test versions of the B61-12 thermonuclear bomb earlier this year, shedding more light on how the U.S. government plans to modernize its nuclear weapons program and nuclear triad.

Unsanctioned. North Korean intelligence services have carried out sophisticated (and unsophisticated) campaigns to hack and snoop on U.N. sanctions experts and other U.N. officials, as our colleague Colum Lynch scoops. Sanctions experts said they receive little, if any, support from the United Nations to protect against such attacks, underscoring how difficult it is for these experts to track and enforce U.N. sanctions on North Korea.

Kingpin toppled. This week, the Colombian government announced its armed forces captured the country’s most notorious and powerful drug lord, Dairo Antonio Úsuga, known as Otoniel. Colombian President Iván Duque Márquez called his capture “the biggest blow against drug trafficking in our country this century” and compared its significance to the killing of drug lord Pablo Escobar in the 1990s. 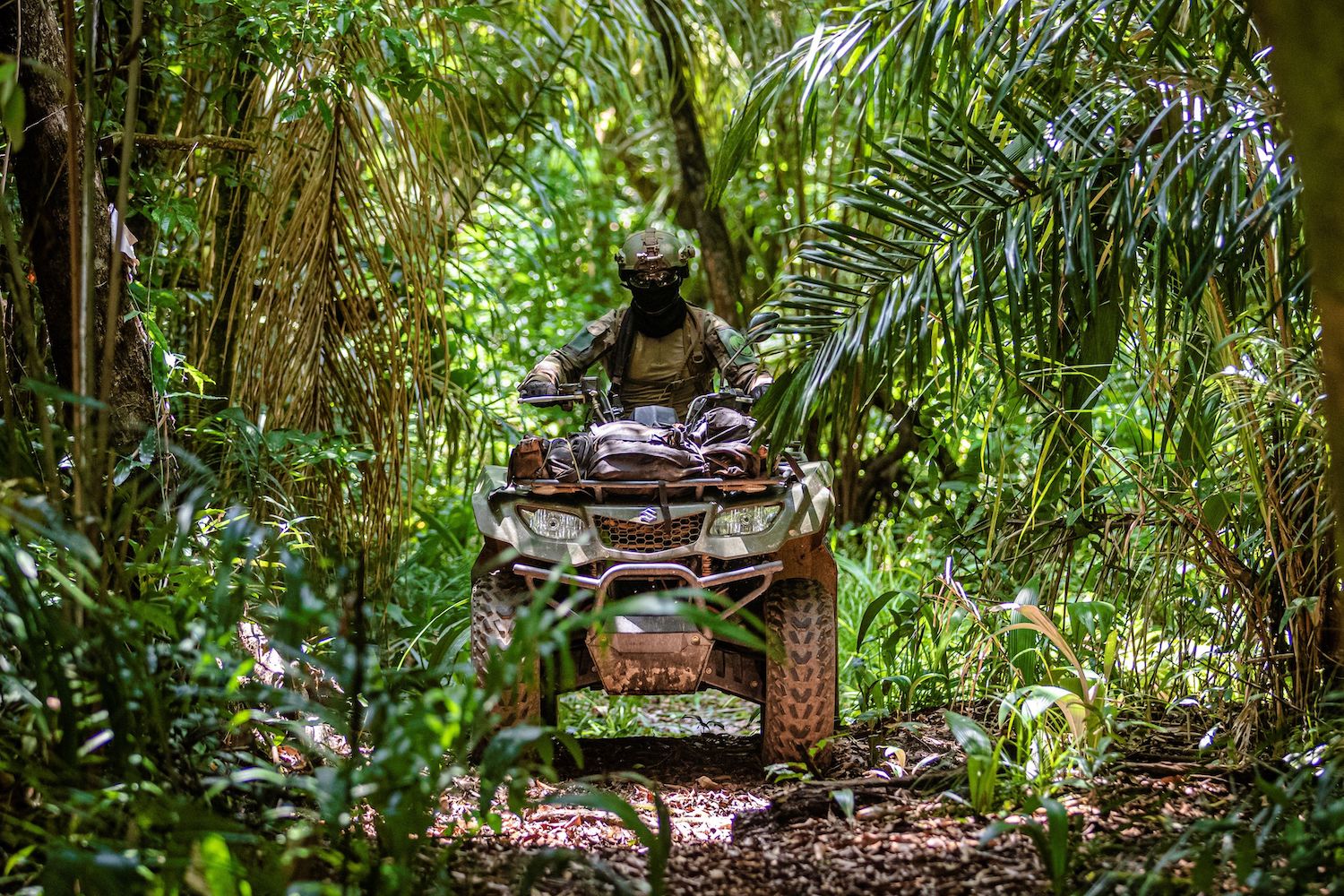 A soldier of the French 3rd Foreign Infantry Regiment drives a quad during a training exercise at the Guiana Space Centre in Kourou, French Guiana, on Oct. 22.Jody Amiet/AFP via Getty Images

The Pentagon’s office culture is stuck in 1968. FP contributors Zachery Tyson Brown and Kathleen McInnis spit some hard truths about the broken and sclerotic office culture at the Defense Department in a new piece for Foreign Policy: “Between coordinating horizontally with every office that has an ‘equity’ in whatever decision needs to be made and then working through seven or so vertical layers of approval, bold ideas often either suffer death by a thousand paper cuts or are perhaps more benignly just smothered in boredom,” they write.

Oct. 29: The U.N. Security Council convenes to discuss the security situation in Mali.

The Pentagon appeared to have a couple of different messages this week about China’s recent tests of nuclear-capable hypersonic weapons systems.

The Joint Chiefs’s perspective: “What we saw was a very significant event of a test of a hypersonic weapon system. And it is very concerning. I don’t know if it’s quite a Sputnik moment, but I think it’s very close to that. It has all of our attention,” Chairman of the Joint Chiefs of Staff Gen. Mark Milley told Bloomberg TV on Tuesday.

The Pentagon staff’s take: “I don’t think it does any good for us to characterize this and put a label on it, this advancement of capabilities,” Pentagon Press Secretary John Kirby told reporters on Wednesday.

Ctrl+C/Ctrl+V. What is European politics without another academic plagiarism scandal? Luxembourg’s prime minister, Xavier Bettel, is under scrutiny after a media investigation found that 54 of the 56 pages from his university thesis 20 years ago were plagiarized. He now admits the thesis “should have been done differently.” You think?

You are commenting as . Change your username | Log out
Tags: Europe, United States

NEW FOR SUBSCRIBERS: Want to read more on this topic or region? Click + to receive email alerts when new stories are published on United States, Europe