What a Gangster’s Takedown Says About Colombia’s Fragile Peace

The Gulf Clan grew in areas where implementation of the country’s 2016 peace deal has lagged.

The highlights this week: A look at the paramilitary group behind a high-profile capture in Colombia, what to watch for at COP26, and Mexico City displays new art for the Day of the Dead.

The highlights this week: A look at the paramilitary group behind a high-profile capture in Colombia, what to watch for at COP26, and Mexico City displays new art for the Day of the Dead.

Tactics of War Amid a Supposed Peace

Colombia’s most wanted man was marched out of the jungle in the country’s northwestern Antioquia department on Saturday, wearing all black and swarmed by soldiers.

The Colombian military had been hunting the drug boss Dario Antonio Úsuga, known by his nickname Otoniel, for six years. U.S. prosecutors had been investigating him for more than 10. Otoniel headed the paramilitary and drug trafficking group Gaitanist Self-Defense Forces of Colombia (AGC), known to authorities as the Gulf Clan and thought to be the biggest drug trafficking gang in the country.

President Iván Duque celebrated the capture, saying it “marks the end of the Gulf Clan” and likening it to the 1993 killing of kingpin Pablo Escobar. Analysts such as Sergio Guzmán of Colombia Risk Analysis praised the fact that the operation was carried out based on intelligence and without gunning down the target. The journalist and anti-sexual violence icon Jineth Bedoya wrote that, in addition to drug-related offenses, Otoniel should also be held responsible for sex trafficking operations he reportedly oversaw.

Still, security analysts were quick to say that Duque’s Escobar comparisons—and claims that Otoniel’s arrest will fundamentally alter crime dynamics in Colombia—were overblown. Escobar played a more important leadership role in his Medellín cartel than did Otoniel in the AGC, which has a more horizontal structure, Chris Dalby and Juan Diego Posada wrote for InSight Crime. One of the AGC’s other leaders will likely soon step in to fill his place.

The ACG has grown in recent years in places where the government has failed to fully implement its landmark 2016 peace deal with the Revolutionary Armed Forces of Colombia (FARC), the International Crisis Group’s Elizabeth Dickinson has argued. The agreement ended decades of conflict between the Colombian government and the FARC and earned then-President Juan Manuel Santos the Nobel Peace Prize. Duque’s party campaigned against the peace deal at the time, claiming it was too soft on former guerillas.

Among other provisions, the deal requires the government to roll out rural economic development packages and job programs so that rural farmers do not have to depend on growing the plant coca, used to make cocaine, for income. But by January 2021, a paltry 5.6 percent of families who signed up for the coca income substitution program had alternative projects through which they could make money, according to a United Nations report.

“AGC’s reign was not inevitable; it was facilitated by failures, [especially] to implement peace accord’s coca substitution program,” Dickinson tweeted in August after a visit to Córdoba. There, communities reported intense ACG youth recruitment and a lack of economic alternatives.

The peace accord also stipulates that Colombia’s federal government must provide protection to rural human rights leaders, who often face death threats from local criminal groups they oppose. Authorities have been woefully unsuccessful at providing this security: More than 400 such leaders have been killed since 2016.

Critics argue that government resources are disproportionately spent on pursuing high-profile targets such as Otoniel rather than the peace deal’s pledges to ordinary rural Colombians. In other words, an offensive war on criminal groups supersedes the framework for peace. In a gruesome indicator, the country’s homicide count in the first half of this year jumped 24 percent above what it was during the same time last year.

“The persecution of criminal factions and so-called ‘high-value objectives,’ disconnected from the goal of protecting communities, has fragmented the groups and stimulated competition,” wrote the political scientists María Victoria Llorente and Juan Carlos Garzón Vergara in La Silla Vacía.

Duque’s interior minister pledged last week to make reducing homicides a priority as Duque wraps up his presidential term in the next 10 months.

But the consequences of low investments in the agreement under Duque are not easy to pledge away. In addition to the lives lost in continued rural violence as a result, his tenure has seen a surge in support for the left-wing candidate Gustavo Petro—a vocal supporter of the deal—ahead of next year’s election.

Dark diagnosis. The Americas director of Human Rights Watch, José Miguel Vivanco, was in Spain this week on a mission to get both Madrid and the European Union more involved in democracy protection in Latin America amid what he called the most threatening human rights scenario for the region in 30 years. “Nayib Bukele, the president of El Salvador, has achieved in two years what took [former Venezuelan President] Hugo Chávez almost 10,” he told El País in an interview.

Vivanco’s appeal is evidence of both the inability and apparent lack of interest from regional and outside actors alike in protecting human rights in Latin America. The Organization of American States, previously a more credible regional referee, is plagued by a series of problems that include poor relationships between its director and the member states, he told El País.

Vivanco criticized silence from Spain, Europe, and especially U.N. Secretary-General António Guterres, whom he said “does not exist in the region, even in extreme cases. Guterres could make a difference, as [predecessors] Kofi Annan or Javier Pérez de Cuéllar did.”

Caracas-Tehran ties. Venezuela and Iran are negotiating a 20-year economic cooperation agreement, Iran’s foreign minister announced on Oct. 18. Venezuelan President Nicolás Maduro is due to visit Tehran in the coming months. The two countries have reportedly been swapping crude oil for gas concentrate as a means of surviving U.S. sanctions. 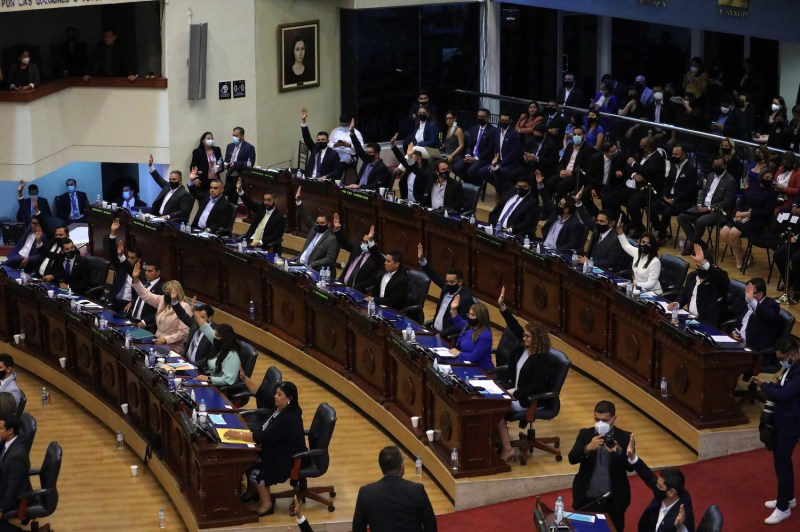 Deputies belonging to the ruling Nuevas Ideas (New Ideas) party vote to dismiss a group of judges during the first plenary session of the Legislative Assembly in San Salvador, on May 1. STANLEY ESTRADA/AFP via Getty Images

Autocratic networking. Salvadoran President Nayib Bukele’s recently founded New Ideas party is in talks to start a branch in Guatemala. The party has been key in Bukele’s consolidation of political control, including by using its two-thirds majority in the legislature to remove the nation’s attorney general and several Supreme Court judges—moves legal experts have called unconstitutional. In September, the court then overturned El Salvador’s ban on presidential reelection. Guatemala’s president, Alejandro Giammattei, himself has presided over dramatic steps against judicial oversight in recent months, including the sacking of the country’s top anti-corruption prosecutor in July.

Meanwhile, Nicaraguan President Daniel Ortega and Honduran President Juan Orlando Hernández met in Managua on Wednesday to sign a treaty on maritime boundaries between their countries. Hernández said the meeting “marks a historic step in the integration of Central America.” His position runs counter to that of other Latin American leaders, who have distanced themselves from Ortega as he carries out a campaign of detentions against Nicaragua’s political opposition. Both countries will hold presidential elections in November.

Art of the dead. To observe Mexico’s Day of the Dead on Nov. 1 and 2, 10 giant skulls with decorations inspired by the painter Frida Kahlo’s artwork have been arranged in a plaza around Mexico City. They were dubbed “Fridacraniums” by their creators and will remain on display until Nov. 9. The art form is popular: an ongoing exposition “Mexicraniums,” also of painted giant skulls, has traveled from Mexico City to sites including Houston and Madrid in recent months.

Brazil is the South American country that contains the largest portion of the Amazon river basin, at 63.9 percent, according to the United Nations Food and Agriculture Organization (FAO). What country is home to the second largest?

Peru contains 15.6 percent of the Amazon river basin, according to the FAO, followed by Bolivia with 11.7 percent. 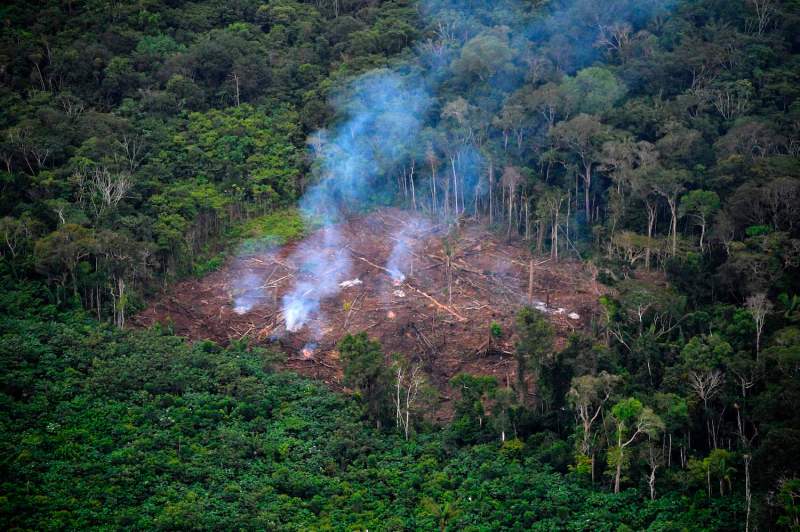 Ahead of the U.N. Climate Change Conference that begins this weekend in Glasgow, Scotland, known as COP26, Latin American nations have been brushing up on their climate commitments—and their appeals for funding for adaptation and mitigation measures.

Duque visited Brasília last week, where he and Bolsonaro discussed efforts to reduce deforestation in the Amazon. Despite his poor record on the issue, Bolsonaro joined Duque in stating that the two countries will announce a pact for Amazon preservation at COP26. Washington played a role in its design, U.S. Secretary of State Antony Blinken said last week.

Duque will attend the conference, while Bolsonaro announced Wednesday that he would not. The Brazilian delegate attending in his place, the diplomat Paulino de Carvalho Neto, said Brazil will formalize plans to bring its carbon neutrality target date forward from 2060 to 2050. “There has been a change of tack since April” on Brazil’s climate actions, Carvalho Neto told Reuters.

Between January and September of this year, Brazil deforested around 1 percent less of the Amazon than during the same period in 2020. Annual levels of deforestation, however, remain at around a 12-year high.

Mexican President Andrés Manuel López Obrador will also be absent from the conference, but Argentine President Alberto Fernández plans to attend. In September, Fernández spearheaded the virtual Latin America climate dialogue, at which many regional leaders voiced the need for wealthy countries to aid developing ones in achieving their climate goals.

On this issue, the International Monetary Fund and World Bank are among organizations that have supported the idea of green debt swaps, or debt relief based on decarbonization measures. Both Fernández and Duque have also called for this step to be taken, and its prospects are expected to be discussed at COP26.

You are commenting as . Change your username | Log out
Tags: Colombia, Drugs & Crime, South America