The Russian navy is getting hypersonic missiles in 2022 in a bid to outpace Washington in the next missile race.

Welcome to Foreign Policy’s SitRep! Good to be with you today: We almost didn’t make it here in time, since we’ve been stuck on D.C.’s slower-than-ever Metro.

Alright, here’s what’s on tap for the day: Russia fields hypersonic missiles for its navy, a top Israeli hacking firm is hit with U.S. sanctions, and Capitol Hill tussles over empty seats at the State Department.

Welcome to Foreign Policy’s SitRep! Good to be with you today: We almost didn’t make it here in time, since we’ve been stuck on D.C.’s slower-than-ever Metro.

Alright, here’s what’s on tap for the day: Russia fields hypersonic missiles for its navy, a top Israeli hacking firm is hit with U.S. sanctions, and Capitol Hill tussles over empty seats at the State Department.

It seems like hypersonic cruise missiles are all the rage these days. Russia is testing them, as are China and even North Korea, and now, not to be outdone, the U.S. Department of Defense is requesting billions of dollars to pour into its own hypersonic missile program.

Russian President Vladimir Putin has wasted no time in showboating his country’s pace in developing hypersonic missiles. He announced this week that the so-called Zircon hypersonic cruise missile is completing more tests and will be ready to deliver to the Russian navy by 2022—a faster-than-expected rollout, if (emphasis on if) Moscow’s claims about how great its hypersonic missiles are stand up to the test.

This is the latest turn of the screw in the hypersonic missile race, and it’s fueling fears in some corners of Washington that America needs to pick up the pace so as to not lose the next round of a new arms race.

What’s with all the hypersonic hype? “Ballistic missiles already fly at hypersonic speeds, so what makes these weapons so special?” a knowledgeable and nerdy SitRep reader might ask. The key difference is that ballistic missiles follow a nice, easy-to-track trajectory to their target.

Two other big issues. Keep in mind: First, both Russia and China reportedly have designs to put nuclear warheads on their hypersonic missiles, unlike the United States. Second, there is currently no international agreement or treaty dedicated to limiting or monitoring hypersonic missiles, meaning absent a new campaign of international arms control diplomacy, we have the perfect recipe for a new three-way arms race.

Putin’s big power play. Russia is working to develop two hypersonic missiles that are potentially nuclear capable: the Avangard and the 3M22 Tsirkon (known in the West as the Zircon).

From Moscow’s point of view, hypersonic missiles serve two main purposes: First, to restore a sense of balance (or in nuclear policy jargon, “strategic stability”) to the nuclear standoff between the West and Russia, after the United States and its allies invested in missile defense systems to blunt the threat of good old-fashioned intercontinental ballistic missiles (ICBMs). If Russian ICBMs can’t get through a net of U.S. missile defenses, then surely its hypersonic missiles can.

Second, there’s the big symbolic victory here for Putin’s audience at home: What a PR coup it would be for Putin if his country could roll out fancy new high-end hypersonic missile systems before the United States.

But… With Russia, there’s always a but. Some Western analysts and defense experts are skeptical about whether Russia’s new hypersonic missiles are actually effective and perform in testing as well as Putin claims.

The Pentagon has various hypersonic missile development programs going already, but, as a Congressional Research Service report on the matter notes, it’s not expected to have an operational hypersonic missile ready to go until at least 2023.

With Russia’s self-declared 2022 timeline, it’s off to the races.

U.S. President Joe Biden has tapped Adm. Christopher Grady, head of the Navy’s Fleet Forces Command, to be the next vice chairman of the Joint Chiefs of Staff. Pending Senate confirmation, he will replace Air Force Gen. John Hyten in the job, meaning at least a short vacancy is likely in the military’s No. 2 role.

Heather Conley has been named as the new president of the German Marshall Fund of the United States. Conley, who was at the Center for Strategic and International Studies, replaces Karen Donfried, whom Biden tapped to be his top State Department envoy for Europe.

Also in the think tank space, Rachel Rizzo is joining the Atlantic Council’s Europe Center as a senior fellow.

At the State Department, Biden nominated New York State Assembly Member N. Nick Perry to be the next U.S. ambassador to Jamaica.

Sean Bartlett is joining the State Department as a senior advisor in the Bureau of Global Public Affairs.

Hack back. The United States put the Israeli-owned spyware purveyor NSO Group on a U.S. government blacklist on Wednesday, a potential blow to the Biden administration’s ties with Israel, which oversees the company’s exports.

NSO Group was recently flagged in the Pegasus Project investigation for selling its software to authoritarian governments looking to spy on journalists, dissidents, and other possible regime opponents. In a statement, the Commerce Department said the designation was aimed at putting human rights “at the center of U.S. foreign policy.”

Xi knows what Xi wants. The Pentagon is increasingly concerned about China’s growing nuclear arsenal, Jack writes, according to a congressionally mandated report released on Wednesday. The Defense Department believes China could have up to 700 deliverable nuclear warheads by 2027, and up to 1,000 by 2030, a little less than a third of America’s warhead arsenal.

And in the wake of major hypersonic weapons tests this summer, defense officials are increasingly fearful the buildup is aimed at the United States. “They are clearly challenging us regionally, and their aspiration is to challenge the United States globally,” Chairman of the Joint Chiefs of Staff Mark Milley said at the Aspen Security Forum in Washington on Wednesday. “They want to challenge the so-called liberal rules-based order. … They want to revise it.”

Empty seats. The battle over getting Biden’s backlog of State Department nominees confirmed is spilling out into the open, as an unusually heated Senate Foreign Relations Committee meeting this week showed, Robbie and FP’s Anna Weber report.

The Democratic-led Senate Foreign Relations Committee greenlighted 14 nominations for key Biden administration foreign-policy posts on Wednesday, but most nominees are under an unprecedented blanket hold from Republican Sen. Ted Cruz over objections to Biden’s policy on a Russian gas pipeline project.

“The senator has abused the process that this committee has in a way that, in my entire life in the Senate, I have never seen on either side of the aisle,” said Sen. Robert Menendez, the Democratic chairperson of the Senate Foreign Relations Committee, of Cruz. 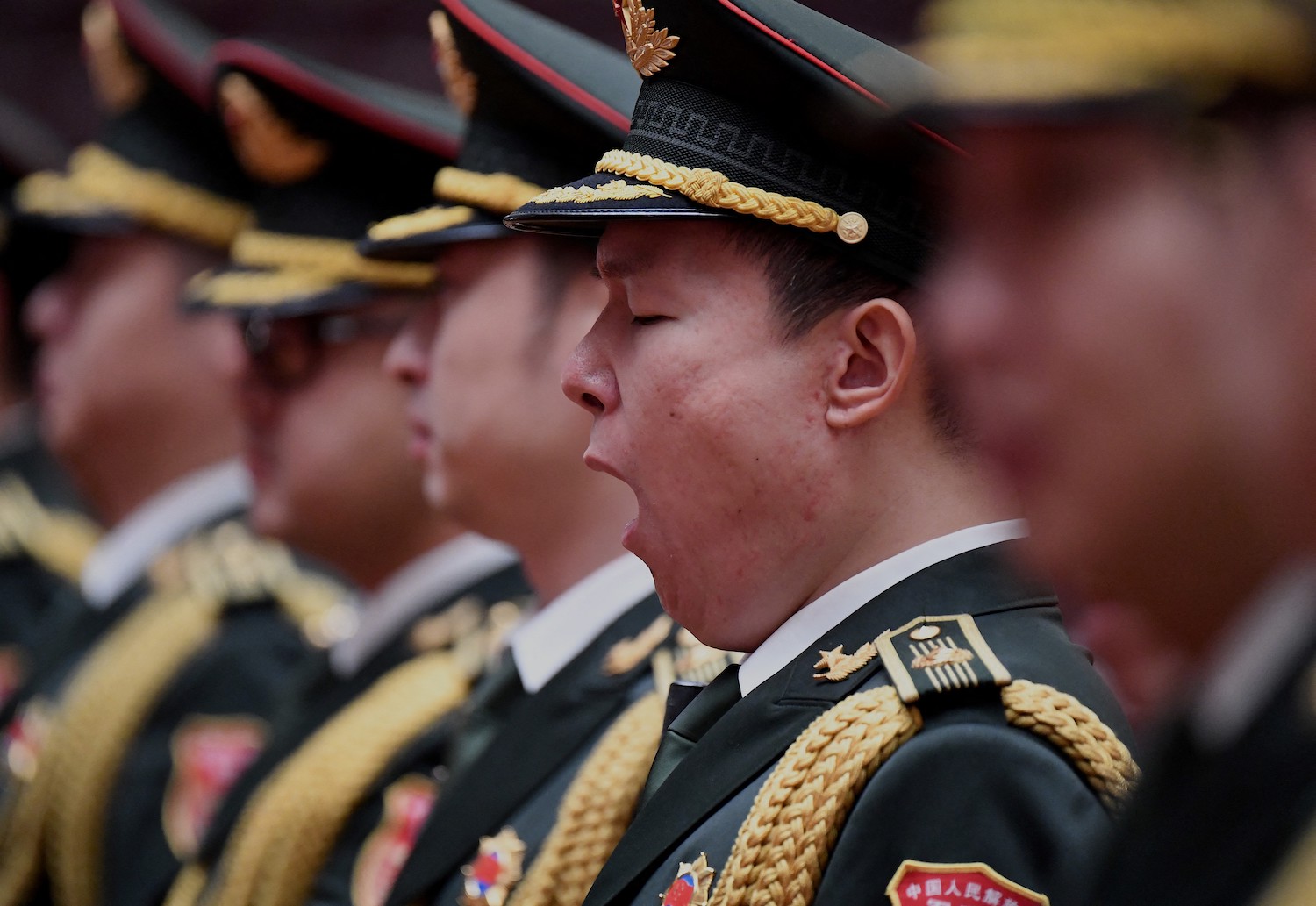 A member of the military band yawns before the start of the Xinhai Revolution’s 110th anniversary commemoration, which celebrates the overthrow of the Qing dynasty and founding of the Republic of China, in Beijing on Oct. 9.Noel Celis/AFP via Getty Images

Bike craze. OK, if you’re like some of us at FP, you’ve probably gotten into cycling during the pandemic, but the prospect of dodging cars on frosty roads during winter—or jumping on the Peloton—doesn’t sound like your idea of a good time. That’s why SitRep recommends curling up with a nice hot chocolate and watching The Least Expected Day, a documentary about Spain’s Movistar cycling team that follows the group through classic races, like the Giro d’Italia, the Vuelta a España, and the Tour de France, and will inspire you to bike—and curse—like a true Spaniard.

And if you’re more of the bookish type, Adin Dobkin’s Sprinting Through No Man’s Land is a fascinating disaster travelogue that follows the potted post-World War I roads of the 1919 Tour de France, recounting the memories of the battles that occurred in towns along the way.

Tuesday, Nov. 9: U.S. Vice President Kamala Harris travels to Paris for a multiday trip that will include meetings with world leaders including French President Emmanuel Macron.

“I cried watching it. I thought to myself, I study countries that do this. I don’t live in one.”

—Former U.S. Secretary of State Condoleezza Rice describes her reaction to the Jan. 6 Capitol assault, which she called her “worst day” since the 9/11 terrorist attacks, with CBS’s Margaret Brennan at the Aspen Security Forum.

No bones about it. Did you see an image of a cool Día de los Muertos skull made by drones flying over the night sky in Mexico City? It was a fake, according to the fact-checkers at Snopes, who ferreted out the forgery by spotting an altered image of Japan’s Mt. Fuji—which is evidently not in Mexico—in the background.

You are commenting as . Change your username | Log out
Tags: Eastern Europe, Europe, Russia, Weapons