Can Ethiopia Avoid a Wider War?

Ethiopia on the Brink

Ethiopia on the Brink

The OLA, TPLF, and several other ethnic-based resistance groups are expected to formally announce a military and political alliance today to “establish a transitional arrangement in Ethiopia,” according to the Associated Press.

In Addis Ababa, house-to-house searches have increased as the government rounds up male ethnic Tigrayan residents, raising fears of violent backlash against the ethnic group regardless of their political allegiances.

While tensions increase, leaders are calling for calm. Jeffrey Feltman, the U.S. envoy for the Horn of Africa, arrived in Ethiopia on Thursday for talks with Abiy aimed at securing a cease-fire. Kenyan President Uhuru Kenyatta has also voiced his concern, saying the “fighting must stop” in a statement.

As Feltman pursues talks in Ethiopia, his fellow citizens have been advised to leave. On Thursday, U.S. Embassy staff joined that list, with the State Department authorizing voluntary departures for nonessential workers and their families.

U.S. President Joe Biden has already threatened to cut off Ethiopia’s preferential trade access to pressure Abiy’s government to negotiate—and could go further with reports indicating he will soon impose sanctions based on a September executive order. The order counts both the TPLF and Ethiopian government as potential targets should Biden decide to follow through.

In a sign that Abiy may not be interested in peace any time soon, Ethiopia is reportedly in the market for Turkish drones. The relatively cheap Turkish models helped turn the tide in Azerbaijan’s favor in its conflict with Armenia over Nagorno-Karabakh and are considered more effective than the Iranian and Chinese drones already in Ethiopia’s arsenal.

Putting a Price on the Past 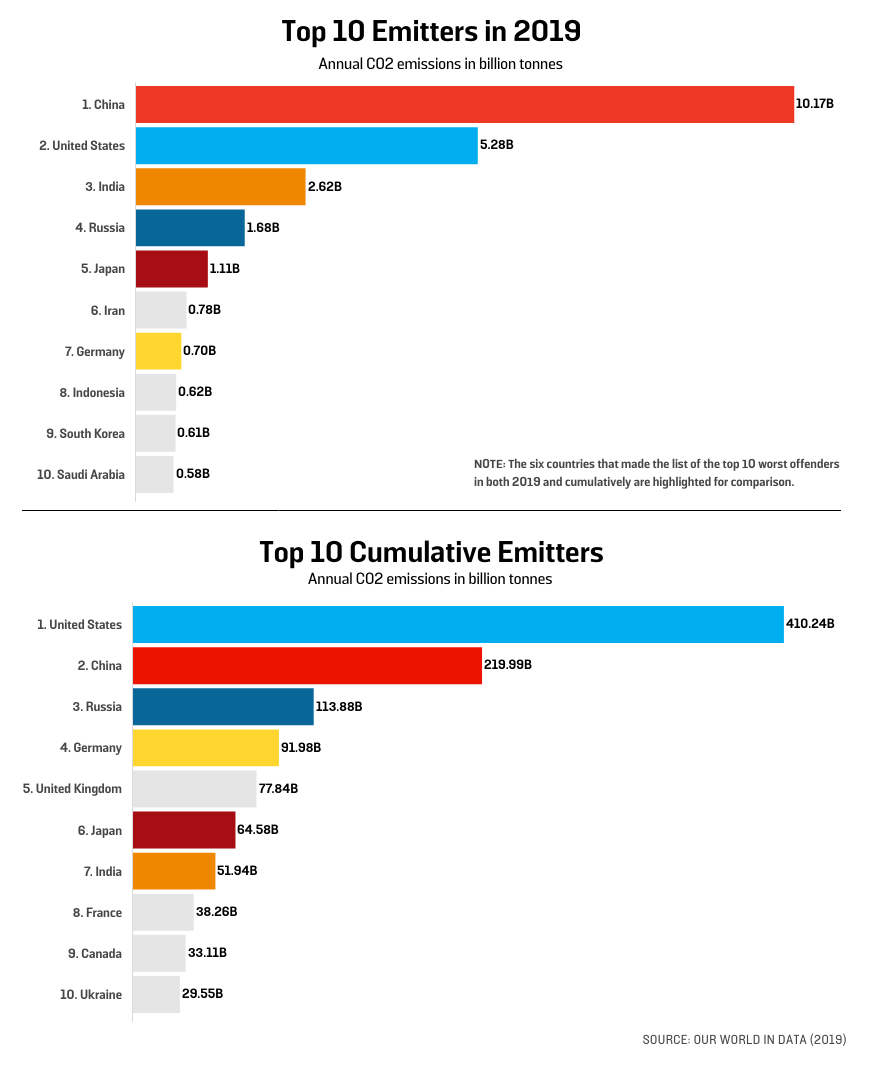 Divisions over who should make the most greenhouse gas emission cuts have divided climate negotiators ever since conversations started in the early 1990s. As the above chart shows, focusing only on the recent past’s emissions can fail to account for the historical climate debt accumulated by richer countries.

Brexit talks. British Brexit Minister David Frost is in Brussels today to meet with his European Union counterpart, Maros Sefcovic, to continue talks over the Northern Ireland Protocol, which Britain is considering suspending unilaterally over what it deems overly cumbersome trade restrictions. The meeting comes after renewed unrest in Northern Ireland when police came under attack during a Unionist-led anti-protocol protest on Wednesday.

Peru’s new cabinet. Peruvian President Pedro Castillo awaits a congressional vote on whether to approve his new cabinet, the second of his short term in office. Castillo’s Free Peru party has cast doubt on whether it will support Castillo’s choices after he chose a figure outside the party, Mirtha Vásquez, to serve as prime minister. As Simeon Tegel reports from Lima, it is not just conservatives but Free Peru’s increasingly bitter founder, Vladimir Cerrón, who will decide Castillo’s fate.

Biden approves Saudi weapons deal. The Biden administration approved a $650 million weapons sale to Saudi Arabia on Thursday, the first major weapons sale to Riyadh during the Biden presidency, which began with a freeze on sales to both the kingdom and the United Arab Emirates. In a statement, the U.S. Defense Department said the sale would help “improve the security of a friendly country that continues to be an important force for political and economic progress in the Middle East.” The U.S. State Department said the sale of air-to-air missiles was consistent with Biden’s pledge to end U.S. support for the war in Yemen as the missiles are “not used to engage ground targets.”

Ortega’s election. Nicaraguan President Daniel Ortega is headed for certain victory as the country holds an election on Sunday that has been widely condemned by the international community. Ortega’s repeated jailing of opposition candidates gives him a clear run toward a fourth term in an election U.S. Secretary of State Antony Blinken has called a “sham” and “devoid of credibility.”

Portugal’s snap election. Portugal will hold a snap election on Jan. 30, Portuguese President Marcelo Rebelo de Sousa announced on Thursday following the government’s recent failure to pass a budget for the following year. The election is likely to provide an opening for Chega, the country’s right-wing populist party, to improve on its current single seat in parliament. In 2021’s presidential election, Chega’s André Ventura came in third but still won more than 10 percent of the overall vote.

Vietnam’s likely next Communist Party leader may have had his career stymied by an encounter with chef Nusret Gokce, known as Salt Bae.

Vietnam’s Minister of Public Security To Lam is facing public derision in his home country after he was captured eating a steak dinner worth three times his monthly income on a visit to London following the U.N. climate change conference in Glasgow, Scotland. To was dining at the restaurant of Salt Bae, who is known for his extravagant salt distribution technique and good looks, and was filmed being fed a gold-coated Golden Giant Tomahawk steak by the chef, a meal that costs roughly $2,000.

Gokce posted the video of the stunt on his own 11-million-follower TikTok account, allowing Vietnamese activists to ridicule To for his life of luxury. The video was removed 30 minutes later.

Correction: Yesterday’s brief included an error in the date of the U.S. midterm elections. It also misstated the types of plants disrupted by jellyfish. Although in some places they obstructed nuclear power plants, in Israel they obstructed the cooling system of a coal-fired plant.

You are commenting as . Change your username | Log out
Tags: Ethiopia, War

China's Spy Balloon Is Not a Test of Will

Ukraine Braces for New Russian Offensive in the East

Netanyahu Has Drawn a Saudi-U.S. Road Map for the Abraham Accords

The government says the state of emergency will facilitate rescue work. In Syria, its unclear whether the government will help or hurt aid efforts.

Northwest Syria was already a humanitarian disaster. Lack of access for aid agencies is making the quake’s aftermath worse.