A new defense report could be a sign that Taiwan is turning the page.

Welcome to SitRep, happy Veterans Day, and happy belated birthday to the Marine Corps. We’re back for another roundup of all the biggest national security news to watch this week.

In honor of both those days, read about how Pfc. Jacklyn Lewis became the youngest service member in World War II to be awarded the Medal of Honor during the Battle of Iwo Jima. He was just 17.

Alright, here’s what’s on tap for the day: a Taiwanese assessment of China’s military might, a showdown on Belarus’s border with Poland, and the Defense Department’s list of U.S. service members whose families are trapped in Taliban-controlled Afghanistan.

Welcome to SitRep, happy Veterans Day, and happy belated birthday to the Marine Corps. We’re back for another roundup of all the biggest national security news to watch this week.

In honor of both those days, read about how Pfc. Jacklyn Lewis became the youngest service member in World War II to be awarded the Medal of Honor during the Battle of Iwo Jima. He was just 17.

Alright, here’s what’s on tap for the day: a Taiwanese assessment of China’s military might, a showdown on Belarus’s border with Poland, and the Defense Department’s list of U.S. service members whose families are trapped in Taliban-controlled Afghanistan.

China Beefs Up for Taiwan Challenge

Taiwan released its latest national defense assessment this week, offering one of the clearest open-source assessments yet on the scope of China’s military capabilities and threat to the island.

One of the biggest takeaways is the Taiwanese government believes China wants to reclaim Taiwan without a fight, which could pour new energy into U.S. and Taiwanese policymakers’ efforts to turn the island into a defensive “porcupine,” a Trump-era strategy that has continued under U.S. President Joe Biden. It includes the deployment of U.S. Army Special Forces and Marines to make Taiwan a pricklier target for China.

Taiwan, the independent and democratically governed island China claims as part of its own territory, has become the epicenter of a major geopolitical showdown between Washington and Beijing—to the point it was dubbed “the most dangerous place on Earth” by the Economist earlier this year amid fears its fate could spark a war between the two world superpowers.

There are other important takeaways from the 208-page door stopper for defense wonks to pour through. One that stood out to us was how China plans to beef up its intelligence-gathering capabilities on Taiwan, including through the “deployment of JB series and Tiantong series reconnaissance and communications satellites to strengthen its supremacy in space and electromagnetic domains.” Another ominous takeaway is China’s People’s Liberation Army (PLA) is “beefing up” amphibious capabilities and “strengthening training for its marines for joint landing operations.”

Fait accompli: U.S. officials have been mostly mum about China’s ability to take the island. Instead, successive heads of U.S. Indo-Pacific Command have pointed to the People’s Liberation Army’s 2027 military modernization target, which will also be the year when Chinese President Xi Jinping is set to end his term as Beijing’s leader. Meanwhile, Gen. Mark Milley, the U.S. military’s top officer, said a cross-Taiwan Strait invasion is unlikely within the next 24 months.

The Taiwanese fear the Chinese could stage a blockade against their ports, harbors, and flight routes, cutting off the United States and other partners from accessing them, and use a buildup of medium- and long-range missiles to box the Pentagon out of the region.

Positive steps: Both the Trump and Biden administrations have been frustrated with Taipei’s approach, as Foreign Policy reported this week, which U.S. officials think has focused too heavily on the acquisition of sexy weapons systems like fighter jets and not enough on prickly defenses that could make China think twice about an invasion, such as coastal defense missiles, sea mines, and the like.

The report is an indication that Taiwan could be taking strides in that direction. In the report, the Taiwanese say their goal is to turn themselves into an “asymmetric” military that relies on nimbler and more accurate weapons systems to defeat the PLA’s higher-end conventional firepower if a fight ever breaks out for the island.

Kate Kizer, policy director for the Washington progressive group Win Without War, is leaving her post at the end of the year, she tweeted.

Border showdown. Belarusian strongman Aleksandr Lukashenko is escalating a crisis with neighboring European Union and NATO countries as it funnels migrants from the Middle East into Belarus—and then prods them across EU borders.

The showdown has led to dramatic scenes of Polish border guards fending off migrants trying to cross into the country, with Belarusian security guards standing at their backs. Eastern European diplomats told SitRep they fear the crisis could escalate and heighten the risk of some form of armed confrontation between the West and Belarus.

More Afghanistan fallout. The Pentagon said it is trying to piece together a master list of U.S. service members’ families who are trapped in Afghanistan, NBC News first reported. Over the war’s 20-year course, some Afghans immigrated to the United States and joined the military or Pentagon in civilian jobs while their families remained in Afghanistan.

Now, the U.S. government is scrambling to get them out. Pentagon spokesperson John Kirby said there are likely “dozens” of U.S. troops’ family members still in the country.

Steady as she goes. The Chinese People’s Liberation Army is making strong progress toward building its third aircraft carrier, according to a Washington think tank that has analyzed satellite imagery of Beijing’s military shipyards.

Experts at the Center for Strategic and International Studies have spotted large openings in the Type 003 vessel’s deck being sealed shut, allowing for internal components to be placed inside. The news comes as the U.S. Naval Institute reported on satellite imagery of Chinese testing ranges this week in the western desert that mock up U.S. aircraft carriers. 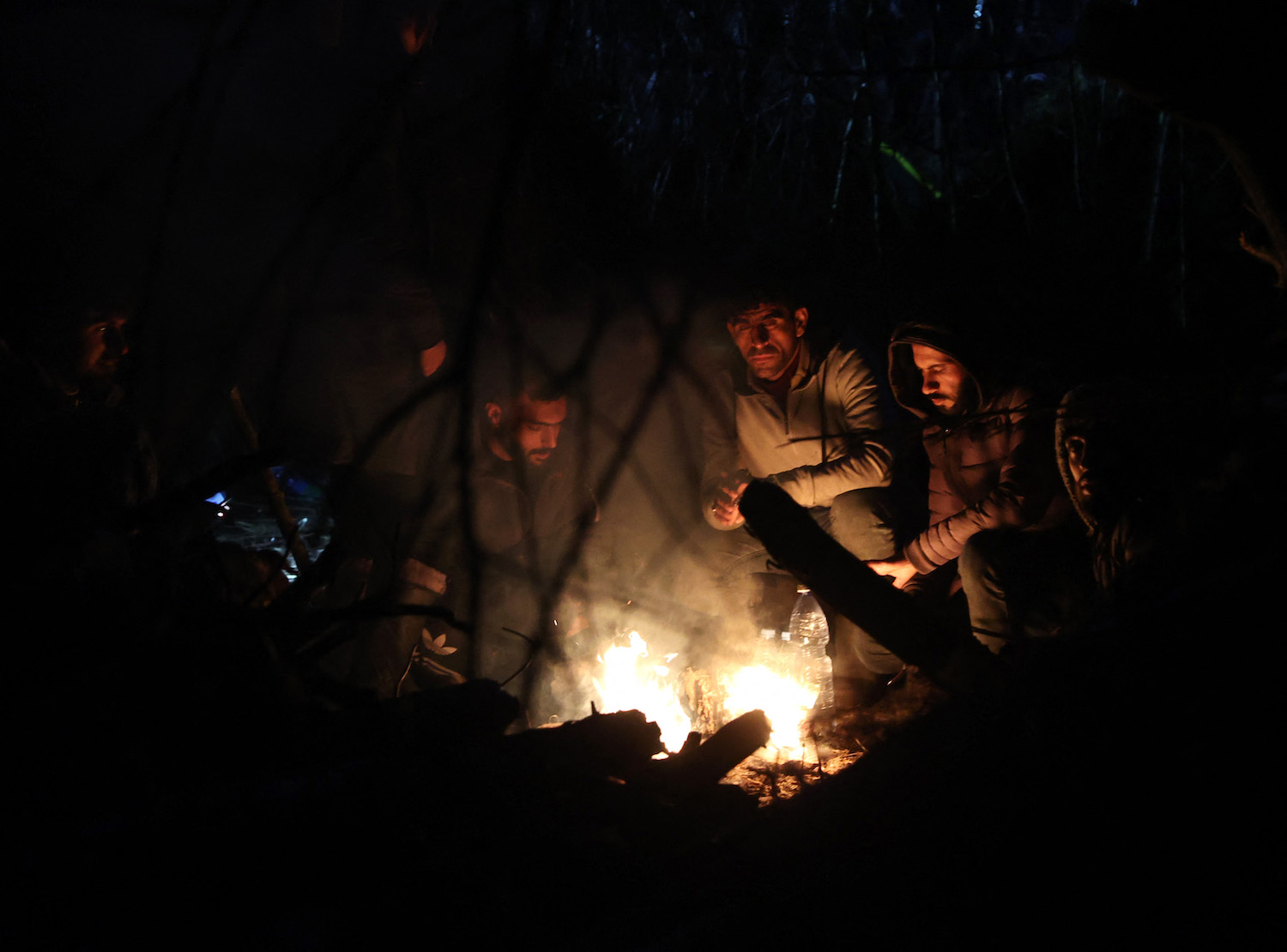 Migrants warm themselves by a bonfire in a camp on the Belarusian-Polish border.

Migrants warm themselves by a bonfire in a camp on the Belarusian-Polish border in the Grodno region on Nov. 10.Ramil Nasibulin/Belta/AFP via Getty Images

“We don’t have clarity into Moscow’s intentions, but we do know its playbook. And our concern is that Russia may make the serious mistake of attempting to rehash what it undertook back in 2014.”

—Blinken on Russia’s recent amassing of military equipment near the Ukrainian border in a joint press conference with Ukrainian Foreign Minister Dmytro Kuleba at the State Department on Wednesday.

Space tacos. NASA astronauts have announced they have grown chilis in space as part of one of their most complex culinary experiments to date (after the space agency ruled last year that lettuce grown in space was safe to eat). The result is the pinnacle of human achievement: space tacos.

U.S. astronauts last week said they enjoyed the red and green chilis with beef fajitas, rehydrated tomatoes, and artichokes. We tip our hats to these space chefs, but we have to add one editorial note from SitRep: Artichokes do not go on tacos.

You are commenting as . Change your username | Log out
Tags: Asia, China, Taiwan, War

NEW FOR SUBSCRIBERS: Want to read more on this topic or region? Click + to receive email alerts when new stories are published on China, Taiwan

The Environmental Toll of Protests and Crackdowns

How Protests and Crackdowns Can Exacerbate Climate Change

We Cannot Risk Another Bout With Viktor Bout

I oversaw the U.S. effort to capture the Russian arms dealer. Here’s what Joe Biden should know before trading him away.