India Has Lost Its Leverage in Afghanistan

New Delhi must rely on regional actors to exert influence in Taliban-led Kabul.

The highlights this week: India struggles for influence in Taliban-led Afghanistan, a digital payment platform sets out to become India’s most valuable tech firm, and a U.N. official issues grave warnings about Afghanistan’s humanitarian crisis.

The highlights this week: India struggles for influence in Taliban-led Afghanistan, a digital payment platform sets out to become India’s most valuable tech firm, and a U.N. official issues grave warnings about Afghanistan’s humanitarian crisis.

On Wednesday, India hosted a regional security conference on Afghanistan, where the Taliban takeover has dealt a blow to its interests. New Delhi enjoyed close relations with Kabul for nearly 20 years, but engagement with the new Taliban regime presents a challenge. The group has a long relationship with Pakistan and seeks close relations with China—both rivals of India. The Taliban victory also galvanized Islamist militants in the region, raising fears in New Delhi about terrorism.

This week’s conference included national security advisors from Russia, Iran, and five Central Asian states. India sought to emphasize regional concerns about the risks of an unstable Afghanistan, including terrorism and drug trafficking. Indian officials also saw the conference as an opportunity to put New Delhi back into the conversation. As one source told the Indian Express, “when you are not at the table, you are on the menu.”

The conference did allow New Delhi to convey its core concerns to friendly regional actors that still enjoy influence in Kabul, a strategy it’s likely to embrace in the coming months. India only recently established formal channels of communication with the Taliban, and it has had only one known meeting with Taliban officials since the takeover: an exchange in Doha, Qatar.

But the conference will do little to strengthen India’s influence in Afghanistan. Its limited relations with the Taliban, along with the likelihood of deepening Pakistani and Chinese footprints in the country, suggest India will be written out of the script. Both Pakistan and China have already hosted senior Taliban officials. Beijing seeks to invest in infrastructure in Afghanistan, and Islamabad has already permitted Taliban officials to take up diplomatic posts.

China and Pakistan’s decision not to attend Wednesday’s conference further demonstrates that neither country plans to help India pursue its interests in Afghanistan. Islamabad, which alleges that New Delhi sponsors anti-Pakistan terrorists in Afghanistan, won’t cede an inch of ground. It has already failed to respond to a recent request to allow Indian trucks to cross through Pakistani territory to deliver food shipments to Afghanistan.

India’s waning influence in Afghanistan not only represents a strategic loss but also puts its many investments in the country at risk. Since 2001, New Delhi’s $3 billion in development assistance has produced more than 400 projects in Afghanistan, including a dam, a highway, a pediatric hospital, and its parliament building. Although India finds itself suddenly locked out, it won’t sit on its hands. New Delhi seeks assurances from the Taliban that its assets and remaining nationals in the country remain safe.

However, India lacks sufficient leverage to reverse its strategic setbacks in Afghanistan under the new regime. The Indian government will need to resign itself to conveying its concerns through countries with more influence, including the United States—which met with China, Pakistan, and Russia in Islamabad on Thursday. Prospects for U.S.-India cooperation in Afghanistan are limited, although New Delhi can count on Washington taking its interests into account.

In Afghanistan, India must carry out a delicate diplomatic dance: compensating for its loss of influence by tightening ties with other regional actors while steering clear of its Chinese and Pakistani rivals.

Nov. 19: The U.S. Institute of Peace hosts a discussion on what’s next for U.S. Indo-Pacific policy, including future developments with the Quadrilateral Security Dialogue.

Islamabad reaches a truce with Pakistan’s Taliban. Pakistan has announced a one-month cease-fire with the Tehrik-i-Taliban Pakistan (TTP). Between 2007 and 2014, the TTP, which is allied with but separate from the Afghan Taliban, was one of South Asia’s most active terror groups until Pakistani counterterrorism operations successfully undermined it.

The TTP has recently ramped up attacks in Pakistan, especially since the Afghan Taliban’s takeover of Kabul. Recent talks were reportedly facilitated by the Haqqani network, an Afghan Taliban faction. (The Afghan Taliban denied there was “official” mediation.) Pakistan has signed truces with the TTP in the past, all of which eventually collapsed. But there is reason for optimism this time around.

Despite its resurgence, the TTP still lacks the strength it enjoyed in earlier years, which limits its bargaining power. It has also tried to reinvent itself as a more moderate group that no longer attacks civilians, suggesting greater receptivity to a deal. But the TTP remains ideologically committed to overthrowing the Pakistani state. To permanently give up its fight, it will expect a lot in return—certainly more than the release of some fighters from jail, the concession so far.

Paytm launches record-breaking IPO. Indian digital payment service Paytm launched an initial public offering (IPO) this week, with plans to raise almost $2.5 billion. The IPO is expected to make Paytm the most valuable technology company in India, with an estimated value of $20 billion. The response so far has been muted. India has long had a largely cash-based economy, but a demonization policy in 2016 and pandemic lockdowns have hampered access to banknotes—and helped companies like Paytm.

Paytm’s largest shareholder is Ant Group, a subsidiary of the Chinese company Alibaba. But according to Paytm regulatory filings from July, there are no Chinese nationals on the firm’s board. After a deadly border clash with China last year, New Delhi curbed its commercial relations with Beijing, including banning 59 Chinese apps.

Grave warnings from Afghanistan. The director of the World Food Program, one of the few major aid agencies continuously operating in Afghanistan since the U.S. withdrawal, recently provided an alarming appraisal of the country’s humanitarian crisis. “It is as bad as you possibly can imagine,” said David Beasley while in Kabul on Sunday. “The next six months are going to be catastrophic. It is going to be hell on earth.”

Beasley said 95 percent of Afghans don’t have enough food. Many countries have made new pledges of humanitarian assistance, but there is no indication the United States or others have a clear plan for delivering it without going through the Taliban. Thomas West, the U.S. special representative for Afghanistan, visited Pakistan on Thursday as part of a larger trip—suggesting Washington is still in a consulting stage and not ready to unveil a formal strategy. 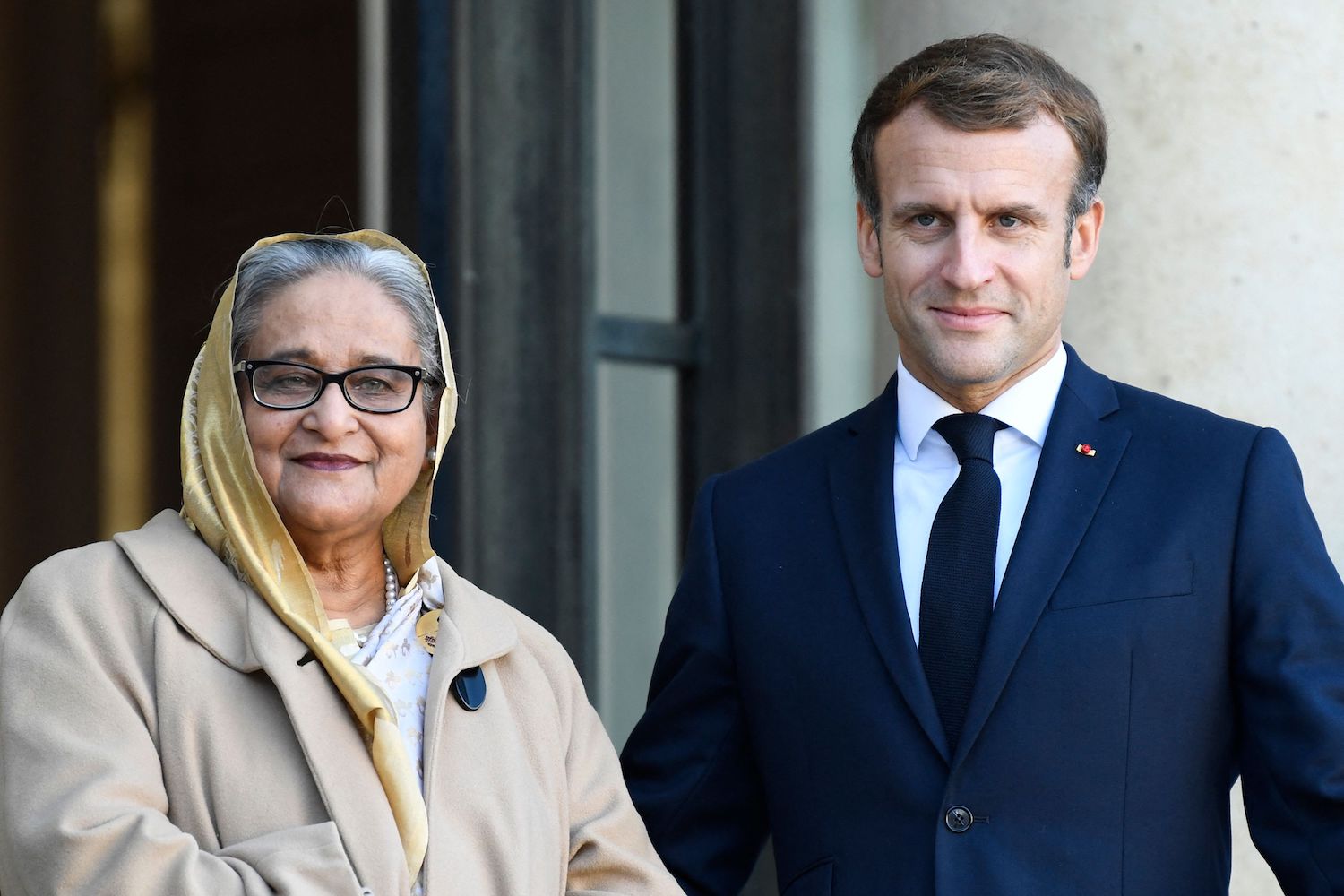 This week, Bangladeshi Prime Minister Sheikh Hasina is on a five-day visit to France, where she met with French President Emmanuel Macron. Of particular note was a joint statement endorsing the “free and open” vision of the Indo-Pacific region articulated by the members of the Quadrilateral Security Dialogue (Australia, India, Japan, and the United States)—and rejected by China.

France, a key Indo-Pacific player because of close partnerships with India and several territorial possessions in the Pacific Ocean, suffered a recent blow to its influence in the region when Australia jettisoned a French submarine deal in favor of a new package from the United Kingdom and the United States.

Macron had the opportunity to reassert French power in the region through his meeting with Hasina. Bangladesh, which has cordial ties with India but also hosts large Chinese infrastructure projects, is trying to balance its relations with India and China. Chinese officials won’t be pleased by Dhaka’s endorsement of the Indo-Pacific policy—a sensitive issue for Beijing. In May, China’s ambassador to Bangladesh warned Dhaka not to join the so-called Quad.

“Even though American troops have left Afghan soil, the U.S. still makes life-or-death decisions for Afghans. We ask that you show leadership and act to stem the immense human tragedy unfolding under your administration’s watch.”

—An open letter to U.S. President Joe Biden, signed by a diverse group of Afghans, calling on Biden to do more to address Afghanistan’s humanitarian crisis.

In the Express Tribune, education policy expert Arooj Naveed Haq writes about the troubled state of Pakistani education. “Critiques that obsessively focus on the content of what is or is not taught in our schools miss out on the entire point: the things that are taught are hardly taught. … The real crisis is not in the content, but in the classroom,” he writes.

Saurabh Kumar Sahu, an Accenture executive, writes in the Financial Express about the need for telecommunications firms in India and beyond to adjust to changing circumstances. “There is tremendous pressure on telecom providers to reinvent. They need to transform into an enterprise that can innovate quickly and capitalise on the upcoming demand for 5G-related offerings,” he argues.

Researcher Emran Emon decries how student political groups at Bangladesh’s university campuses have become increasingly violent in the Asian Age. “Let every educational institution of the country be free from violent politics. … Let the state take proper care of its future heroes and leaders,” he writes.

NEW FOR SUBSCRIBERS: Want to read more on this topic or region? Click + to receive email alerts when new stories are published on Foreign & Public Diplomacy, India, South Asia, Afghanistan