Biden Brings Out the Big Guns for NatSec Noms

Welcome to Foreign Policy’s Situation Report! As a reminder, we’ll be taking a break from SitRep next Thursday to focus on stuffing our faces. We’ll get back to gracing your inboxes with our presence after Thanksgiving. If a week away from SitRep is too much to handle for you emotionally, just remember that absence makes the heart grow fonder.

Alright, here’s what’s on tap for the week: Biden gets heavyweight backing to break Capitol Hill deadlock on nominees, Washington considers sending home some Afghan evacuees, and a Russian anti-satellite test is raising alarm bells at the Pentagon.

Welcome to Foreign Policy’s Situation Report! As a reminder, we’ll be taking a break from SitRep next Thursday to focus on stuffing our faces. We’ll get back to gracing your inboxes with our presence after Thanksgiving. If a week away from SitRep is too much to handle for you emotionally, just remember that absence makes the heart grow fonder.

Alright, here’s what’s on tap for the week: Biden gets heavyweight backing to break Capitol Hill deadlock on nominees, Washington considers sending home some Afghan evacuees, and a Russian anti-satellite test is raising alarm bells at the Pentagon.

Unlike some of his predecessors, former Defense Secretary Robert Gates isn’t one to bask in the limelight of Washington politics after leaving office. But the former Pentagon chief for George W. Bush and Barack Obama is making an exception now, in an effort to unstick at least part of the giant logjam of foreign-policy nominees sitting in the Senate awaiting confirmation.

Gates, in a letter to lawmakers obtained exclusively by the SitRep team, is appealing directly to U.S. senators to confirm Julie Smith, President Joe Biden’s nominee to be the next U.S. ambassador to NATO.

Gateskeeping. “At a time when Russia is threatening Ukraine militarily and to cut off energy supplies to our NATO allies, the United States has no ambassador to NATO. It is critically important to fill that position,” Gates wrote in a letter sent to Senate Foreign Relations Committee members and Senate leadership.

Smith—a longtime defense expert in Democratic foreign-policy circles who was a former aide to Gates at the Pentagon—was nominated back in June. Republican Sen. Josh Hawley, who held up Smith’s nomination, told Foreign Policy in a statement on Thursday that he had lifted the blockade, which he said was over raising NATO’s defense spending pledge. “Today’s security environment is far worse than the one we confronted in 2014, and our allies must increase defense spending accordingly,” Hawley said. “Julianne Smith recognizes that need and has committed to push our allies to go beyond the Wales commitment.”

(Biden notably has not yet named an ambassador nominee for Ukraine.)

Cruz control. The letter reflects mounting concern and frustration in the Biden camp about an unprecedented blanket hold on State Department nominees from Republican Sen. Ted Cruz, centered on a dispute over a Russian pipeline project. (Though Biden was slow to roll out ambassador nominees in the first place, now the main problem sits with the Senate.)

The numbers don’t look good. As of this week, Biden has submitted 124 nominees for senior State Department and U.S. Agency for International Development roles to the Senate. Of those, the Senate has confirmed only 30. There are nearly 100 ambassador posts that are vacant now.

Rubio has entered the chat. There are other Biden nominees facing Republican opposition. Sen. Marco Rubio announced this week he was placing a hold on Biden’s ambassador nominee to China, veteran diplomat R. Nicholas Burns, and to Spain, Julissa Reynoso Pantaleón. “Nicholas Burns has a long career in public service, but it is a career defined by the failure to understand the threat posed by the Chinese Communist Party,” Rubio said.

The Burns hold is a big deal, given the way China looms over U.S. foreign policy these days.

“Unbelievable. Nothing like benching your starting quarterback if you want a winning strategy for strategic competition? The only winners from this move are in Beijing,” the Democrats on the Senate Foreign Relations Committee tweeted in response to Rubio’s announcement.

Forcing a vote. The holds prevent the Senate from approving less controversial ambassador nominees by unanimous voice vote, or they slow-walk votes on nominees that could be confirmed by votes of, say, 75 to 25. The holds take up valuable floor time on the Senate when Senate Majority Leader Chuck Schumer is already juggling other major pieces of legislation, including the defense authorization bill.

For now, it’s unclear if Biden will be able to get an ambassador to NATO or China in place before the end of the year.

Biden is still plugging away at announcing nominees though. Among nominees the White House announced this week: Dimitri Kusnezov to be undersecretary for science and technology at the Department of Homeland Security; Steven Fagin to be U.S. ambassador to Yemen; Jodi Herman to be assistant administrator for legislative and public affairs at USAID; and Lester Martinez-Lopez to be assistant secretary for health affairs at the Defense Department.

The Halifax Forum. A group of foreign and defense ministers, top U.S. lawmakers, and top Western military commanders are descending on Nova Scotia, Canada, this weekend for the annual Halifax International Security Forum.

It’s the first major in-person get-together on the international conference circuit and the first time Western policymakers are meeting to reflect in person on the fallout from the stinging defeat in Afghanistan. SitRep will be on the ground in Halifax covering the event, so stay tuned for news.

Send them back. The Biden administration is considering sending 200 Afghan evacuees at a U.S. military base in Kosovo back to Afghanistan if they do not clear security vetting, CNN reports. That’s just one option available to administration officials to deal with the problem—and the legal merits are still being questioned in Washington—but the problems at Camp Bondsteel point to a larger issue of where to house Afghans who don’t clear U.S. security hurdles.

Let me testify. The Pentagon twice directed the commander of the D.C. National Guard to send troops to protect the U.S. Capitol against a pro-Trump mob seeking to stop the Jan. 6 presidential election certification, according to a newly released Defense Department probe, a finding that appears to run against retired Maj. Gen. William Walker’s congressional testimony.

Then-Army Secretary Ryan McCarthy told Walker at 4:35 p.m. on Jan. 6 that he was authorized to deploy the D.C. troops—who operate under Army authority—and reissued the order 30 minutes later. Walker told Congress this year that he did not receive the go-ahead until 5:08 p.m., more than three hours after the Capitol was breached.

“It’s probably from a deterrence perspective,” Maj. Gen. Leah Lauderback, Space Force’s director of intelligence, surveillance, and reconnaissance, said at an industry conference in Las Vegas on Wednesday. “This is a continuation of their intent to degrade and deter us from using our space capabilities.” 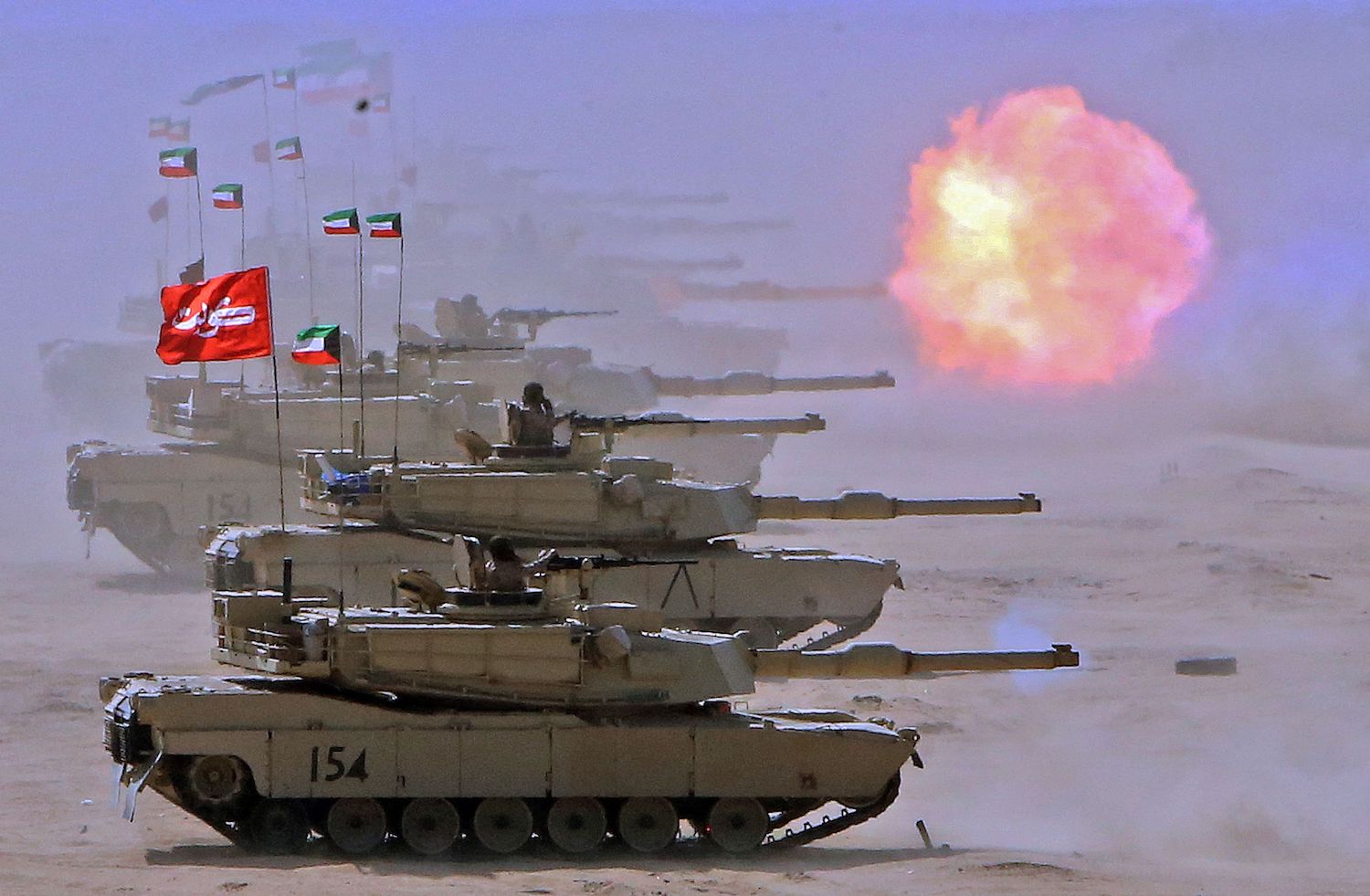 Tanks from the Kuwait Land Force take part in a military exercise with the Saudi and U.S. militaries, north of Kuwait City, on Nov. 18.Yasser Al-Zayyat/AFP via Getty Images

Thursday, Nov. 18: Defense Secretary Lloyd Austin departs for a multiday Middle East jaunt that will take him to Bahrain and the United Arab Emirates.

“We have made very clear we support the Taiwan Act, and that’s it. It’s independent. It makes its own decisions.”

—Biden appears to encourage Taiwanese political independence in an off-the-cuff gaffe reported by FP’s Amy Mackinnon and Anna Weber. Biden later clarified that there was no change in the United States’ “One China” policy.

You are commenting as . Change your username | Log out
Tags: NATO, Security, United States