What Is China’s Future in Africa?

Beijing is scaling back its investments across the continent, but it still has greater economic influence than the United States.

By Nosmot Gbadamosi, a multimedia journalist and the writer of Foreign Policy’s weekly Africa Brief.
December 8, 2021, 6:02 AM

African leaders gathered in Senegal’s capital, Dakar, last week for the eighth triennial Forum on China-Africa Cooperation. Beijing cut its financing over the next three years from $60 billion at the previous summit to $40 billion. Experts saw this as a sign that China’s relationship with the continent is changing.

Chinese President Xi Jinping, who has not left China since the pandemic began, delivered his address via video link. Xi pledged to encourage Chinese companies to invest at least $10 billion in Africa over the next three years and champion greener deals. China also promised 1 billion COVID-19 vaccine doses to African governments.

Loans to launder. For some observers, the reduction shows China is starting to see fewer benefits from its African dealings. Zambia became Africa’s first coronavirus-era sovereign default last year. There was blowback from G-20 finance officials regarding the nondisclosure agreements on Zambia’s $6.6 billion in Chinese loans, pressuring African governments to declare any future arrangements with Beijing.

Last week, Britain’s Secret Intelligence Service chief warned that Beijing uses money to “get people on the hook.” But the idea of Chinese debt-trap diplomacy is often oversimplified, given that many African countries owe more to private creditors than to China and have embedded political ties with their former colonial powers.

African governments have willingly accepted loans from Beijing because no accountability was required in return. African leaders could win elections thanks to the roads, ports, and railways promised to citizens. A white paper published before the forum reaffirmed China’s commitment to “no interference in African countries’ internal affairs.” But locals are increasingly protesting Belt and Road Initiative (BRI) projects because of resulting environmental problems in their communities.

Angola, Ghana, Gambia, and Kenya have seen demonstrations against Chinese-funded projects. As with the Democratic Republic of the Congo, where Chinese banks paid $19 million in construction payments for a company that had no known construction projects, public concern is growing about loans with few strings attached being used to launder money for projects that are never built.

In Nigeria, one of the top recipients of BRI investments, so-called ghost projects have cost $6.8 million. These projects were meant to power off-grid communities, but Nigeria’s Rural Electrification Agency ended up making payments to more than 150 opaque or undisclosed contractors.

U.S. vs. China. Despite this discontent, the relationship has offered Africans affordable technology, youth exchanges, and medical training programs—as well as a trade imbalance: China’s exports to Africa amounted to more than $113 billion in 2019 but received $95.5 billion in imports, a trade deficit of nearly $18 billion for Africa’s economies.

The United States is trying to capitalize on frustrations with Beijing. Other nations’ “infrastructure deals are opaque, coercive,” U.S. Secretary of State Antony Blinken said in Nigeria last month without mentioning China. “They burden countries with unmanageable debt.” But Washington is not exactly laying out the welcome mat.

Summit for some. As U.S. President Joe Biden’s virtual Summit for Democracy takes place this week amid a global outbreak of the omicron variant, non-American residents from eight countries have been prohibited from entering the United States. All of the countries are African, including the continent’s third largest economy: South Africa.

The United States’ relationships have been primarily driven by security concerns rather than economic ones, a Foreign Policy article concluded last week. The United States may provide military hardware and boots on the ground, but in Africans’ daily lives, the mobile phones used, the televisions watched, and roads driven are built by China.

Thursday Dec. 9 to Friday, Dec. 10: U.S. President Joe Biden holds his virtual Summit for Democracy. More than 100 leaders are expected, including heads of state from Kenya, Ghana, and Zambia.

Friday, Dec. 10: The U.N. Security Council holds a briefing followed by consultations on the Integrated Transition Assistance Mission in Sudan. 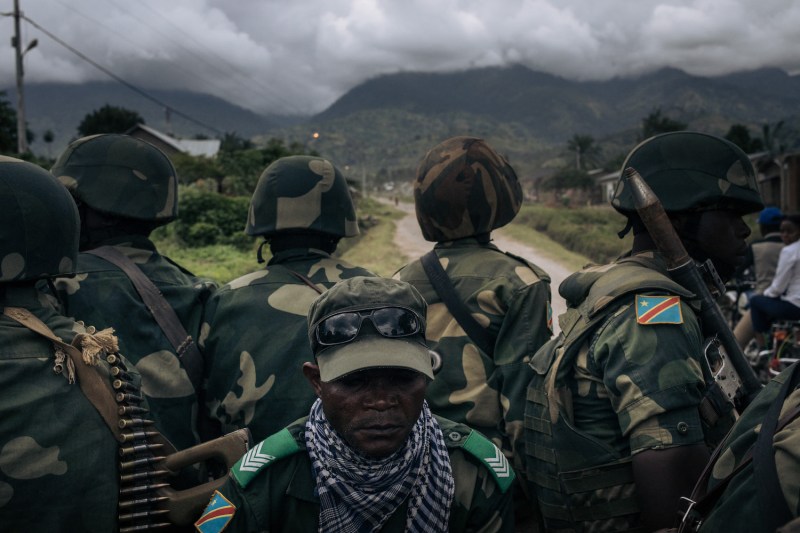 Congolese soldiers exit the town of Mutwanga, partly deserted after recent armed attacks, in northeastern Democratic Republic of the Congo on May 24.ALEXIS HUGUET/AFP via Getty Images

Anti-terror alliance. Uganda and the Democratic Republic of the Congo joined forces to uproot the Allied Democratic Forces (ADF), an Islamic State-linked rebel group. Last week, the Ugandan army confirmed it carried out airstrikes in the forested Rwenzori Mountains, where the ADF, originally a Ugandan rebel group, fled and regrouped more than 25 years ago. On Wednesday, Ugandan troops crossed into Congo’s North Kivu province searching for ADF camps.

In 2005, the International Court of Justice ruled that the Ugandan army violated international human rights laws during that intervention. Their return to the region could lead to the formation of even more armed groups. Congolese Nobel Peace Prize winner Denis Mukwege tweeted, “the same errors will produce the same tragic effects.”

School’s out. Ethiopian authorities have closed all secondary schools so children can harvest crops to help the war effort, state media reported last week. Ethiopia’s education minister, Samuel Kifle, said the closures will last for one week. More than 1.2 million students are already out of school due to buildings being destroyed in the ongoing conflict, Kifle said.

Since Ethiopian Prime Minister Abiy Ahmed announced he was heading to the front line, government forces have reportedly regained control of some areas captured by Tigrayan rebels. The town of Lalibela, a UNESCO World Heritage Site, was retaken on Thursday, according to the Ethiopian government. Then, on Monday, the strategic towns of Dessie and Kombolcha were recaptured.

Election chaos. Saif al-Islam al-Qaddafi can compete in the Dec. 24 presidential elections, a Libyan court ruled on Thursday. The son of late dictator Muammar al-Qaddafi had been disqualified by the country’s electoral commission due to alleged war crimes. Qaddafi still has a warrant against him from the International Criminal Court.

Other controversial candidates are running too, including commander Khalifa Haftar, who controls eastern Libya and is facing his own war crimes charges. The United Nations and several Western powers appear to have placed excessive faith in the planned vote. “Elections are considered to be the answer—regardless of whether the political, social, and legal conditions are in place to ensure a stable transition,” political analyst Samir Bennis wrote in Foreign Policy last week.

Attack in Mali. More than 30 people were killed in an attack on a bus in central Mali last week, according to the country’s interim government. No group has claimed responsibility yet. Conflict in Mali has engulfed neighboring Burkina Faso and Niger despite the presence of French and U.N.-backed troops, which activists said have worsened insurgencies. Nigeria, also beleaguered by various armed terrorists, deployed 62 soldiers and officers to Mali under the United Nations’ peacekeeping mission there.

It comes after Apple warned two Ugandan journalists and a political opposition figure that their phones may have been targeted by “state-sponsored attackers.” Norbert Mao, head of Uganda’s Democratic Party, said Apple notified him in late November that his iPhone had been compromised. Apple sued NSO Group in November for violating U.S. federal anti-hacking laws.

Citizens have long campaigned for the ban over fears that richer countries were circumventing costly disposal regulations by exporting items to Africa as reusable electronics. Unsalvageable products subsequently end up in African landfills in what experts argue is a new form of “toxic colonialism,” with waste shipped in containers from Europe, China, the United States, and Canada, according to researchers.

One estimate suggests around 64 percent of the European Union’s electronic waste ends up in Africa each year. The move may lead to bans in West Africa, where the problem is also acute.

South Africa is experiencing a rapid fourth wave of coronavirus infections linked to the new omicron variant. South African scientists said omicron appears to spread more than twice as fast as the delta strain. It has now been detected in 52 countries.

On Monday, Nigeria became the latest African nation added to the U.K. travel red list. British authorities said 21 out of the 261 identified omicron cases in England, as of Monday, had been linked to Nigeria. But Nigeria’s government said it only identified three omicron cases and called the ban “travel apartheid.”

China-Congo fraud. The latest materials in “Congo Hold-Up,” a leak of documents from private bank BGFIBank, reveal fraud and bribery in a $6.2 billion minerals-for-infrastructure deal inked in 2008 under then-Congolese President Joseph Kabila.

The trove of 3.5 million financial documents—obtained by Platform to Protect Whistleblowers in Africa, an organization of lawyers and investigative journalists—prompted allegations that Chinese firms transferred at least $31 million in bribes to Kabila and his inner circle. The funds were allegedly deposited through a shell company established by state-owned giants China Railway Group and Sinohydro. Sicomines, the joint China-Congolese venture formed to implement part of the deal, denied the claims. The Congolese government has launched a judicial inquiry into the allegations.

State capture of mine. Alexkor, a South African state-owned diamond mine in the Northern Cape province, “has been destroyed by corruption and state capture,” miners said.

The South African investigative journalism platform amaBhungane revisited allegations into how a company called Scarlet Sky Investments, which was ultimately controlled by allies of the infamous Gupta family, was able to systematically undervalue and sell off millions of dollars’ worth of diamonds to selected bidders. The diamonds could then be later resold at market prices, allowing purchasers to pay lower taxes in the country of origin—and the company could then receive kickbacks as a result.

Despite an inquiry that began in August 2018, many questions remain unresolved, and small-scale diamond miners, who said they lost out from the dealings, continue to suffer the fallout.

Nosmot Gbadamosi is a multimedia journalist and the writer of Foreign Policy’s weekly Africa Brief. She has reported on human rights, the environment, and sustainable development from across the African continent. Twitter: @nosmotg

You are commenting as . Change your username | Log out
Tags: Africa, Economics

NEW FOR SUBSCRIBERS: Want to read more on this topic or region? Click + to receive email alerts when new stories are published on Economics, Africa