What Are America’s Adversaries Up To? That’s Classified.

The military brass is tired of getting muzzled on Russia and China’s bad behavior.

Welcome to Foreign Policy’s SitRep! First off, still looking for some positive affirmation going into the holiday season? Have you considered becoming a Central Asian dictator? Because Turkmenistan’s rubber-stamp parliament showed it isn’t shy about heaping praise on its president.

Welcome to Foreign Policy’s SitRep! First off, still looking for some positive affirmation going into the holiday season? Have you considered becoming a Central Asian dictator? Because Turkmenistan’s rubber-stamp parliament showed it isn’t shy about heaping praise on its president.

You Won’t Believe What Russia and China Are Up To! It’s [Redacted]

In late October, the Defense Department’s No. 2 military officer was set to retire in a matter of days, but he still didn’t give much away to the reporters who flanked him around a banquet table in a stuffy Washington hotel. He couldn’t say whether the United States was worried about China’s recent test of a nuclear-capable hypersonic missile because it was classified. He couldn’t talk about the test’s specifics because those details were also classified. And he couldn’t say how many tests China had done either because that, too, was classified.

But as everyone was getting up to leave the Fairmont Hotel, now-retired Gen. John Hyten said something surprising for a guy who’d spent most of his career in areas restricted to security clearance-holders. “We are so over-classified,” he said. “You can’t actually deter your adversary if everything’s in the black.”

And Hyten’s not alone in feeling the Pentagon’s military brass is too muzzled by classification restrictions to talk about China and Russia’s bad behavior. Under questioning from Sen. Richard Blumenthal on Wednesday—who called on the United States to release more details about Russia’s military buildup on the Ukrainian border—Hyten’s likely successor as vice chairperson of the Joint Chiefs of Staff, Adm. Christopher Grady, also admitted the Pentagon was too tight-lipped. “In general, we tend to over-classify,” Grady told lawmakers.

“We request this help to better enable the U.S., and by extension its allies and partners, to win without fighting, to fight now in so-called gray zones, and to supply ammunition in the ongoing war of narratives,” the commanders wrote to then-acting Director of National Intelligence Joseph Maguire. “Unfortunately, we continue to miss opportunities to clarify truth, counter distortions, puncture false narratives, and influence events in time to make a difference.”

And it even extends to the Biden administration’s top priorities. Senior defense officials haven’t elaborated on many basic questions about the impacts of the Pentagon’s China review on policy, insisting those details are classified.

But Russia’s buildup of troops near Ukraine, which the Ukrainian Ministry of Defence estimates is up to 115,000 forces, has given the United States an opportunity to declassify reams of intelligence. Behind the scenes, U.S. officials have begun sharing intelligence on the military ramp-up with European allies, including those outside of the Five Eyes intelligence network—an unusual step.

And the proliferation of commercial satellites circling the Ukrainian battlefield has also given the Biden administration opportunities to piggyback off of open-source information. The Washington Post reported that Russia could surge 175,000 troops into Ukraine based on unclassified satellite data analyzed by U.S. intelligence agencies, which showed 50 Russian tactical groups arriving with tanks and artillery.

“It’s a fascinating document that shows how effectively an outfit like [the National Geospatial-Intelligence Agency] can convey findings to a global public,” Joshua Pollack, editor of the Nonproliferation Review, tweeted last week.

Happy ending? Whatever classification roadblocks Hyten faced when talking about Chinese hypersonics were eventually removed, just in time for him to talk to the media before he departed from the Pentagon last month. “They launched a long-range missile,” Hyten told CBS News last month. “It went around the world, dropped off a hypersonic glide vehicle that glided all the way back to China.” The missile impacted a target in China, he said.

Hyten used to joke when he was commander of U.S. Strategic Command, overseeing the United States’ nuclear triad, that Dr. Strangelove was a “lesson in deterrence,” riffing on actor Peter Sellers. “Wouldn’t it have been nice if you told us about the doomsday machine?”

Remember Quibi? That multibillion-dollar media venture that ended in failure? Well, former Quibi CEO Margaret Whitman was just nominated to be the U.S. ambassador to Kenya. (Whitman, also former CEO of Hewlett-Packard, has no prior diplomatic experience and was also a major Biden campaign donor).

At the Pentagon, Biden nominated Agnes Schaefer to be assistant secretary of the Army for manpower and reserve affairs.

U.N. Libya envoy. U.N. Secretary-General António Guterres appointed U.S. diplomat Stephanie Williams as his senior adviser for Libya. In case you missed it, we have more backstory on the drama surrounding the U.N. Libya envoy here.

Iran to DEFCON 3. Israeli Defense Minister Benny Gantz is often in Washington to meet with Pentagon officials, but Thursday’s meeting with U.S. Defense Secretary Lloyd Austin won’t be the usual trans-Atlantic jaunt. Gantz and Austin are expected to talk about military exercises to prepare to destroy Iran’s nuclear facilities as a last resort if flagging talks fail, Reuters reports.

Ukraine needs guns. Lots of guns, they’re telling U.S. officials. To stave off a Russian assault, Kyiv has asked the Biden administration for a laundry list of defensive weapons, including support for air and naval defense and electronic warfare as well as U.S.-owned Soviet-era Mi-17 helicopters and munitions originally destined for the Afghan army.

FP’s Amy Mackinnon, Jack, and Robbie explain the situation on the ground in a deep dive that takes you inside how the Biden administration is scrambling to respond to the crisis.

Trouble on the border. The Trump-era military mission on the U.S. border with Mexico has devolved into an odyssey of misconduct and substance abuse, according to an extensive Army Times investigation.

Among the findings: Alcohol and drug abuse became widespread for off-duty troops at hotels, and 16 troops have been arrested for charges including drugs, sexual assault, and manslaughter. One 1,000-soldier unit from Texas saw three soldiers die during the deployment. 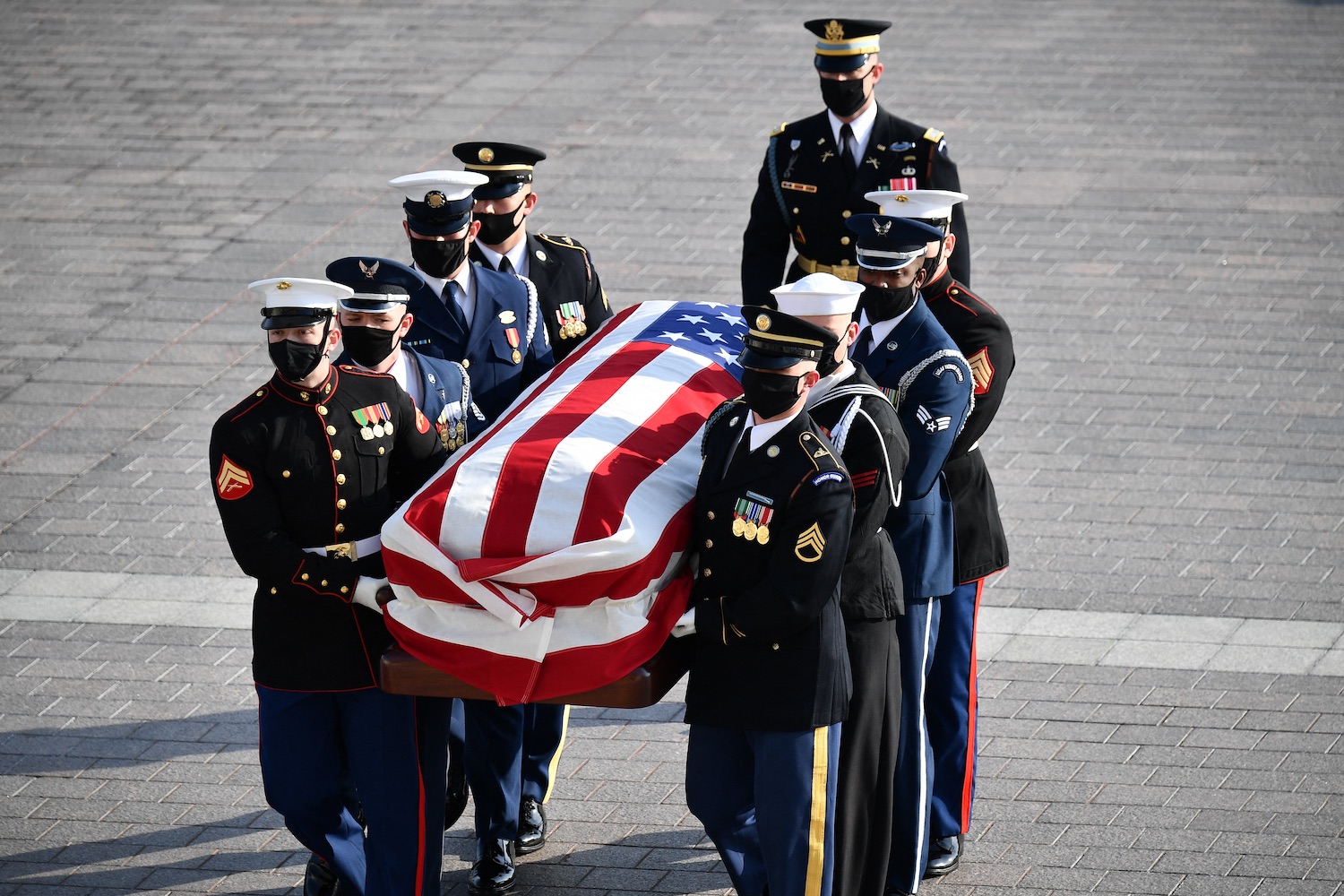 The casket of former U.S. Sen. Bob Dole arrives at the U.S. Capitol in Washington, where it will lie in state on Dec. 9. Photo by Mandel Ngan/Pool/AFP

Soviet time. This month marks the 30th anniversary of the fall of the Soviet Union. And what better time than the end of the Cold War to flash back to another era of navel-gazing in U.S. foreign policy. In 1990, then-Foreign Policy editor and former State Department official Charles William Maynes asked whether the United States, without a peer competitor, would be able to chart a meaningful course.

But with Russians now massing on Ukraine’s border, it’s interesting to look back at Maynes’s predictions, which didn’t quite hold up. “In the 1970s China evolved from a hostile into a friendly power,” he wrote. “Now in the 1990s the Soviet Union is following a similar evolution.”

Dec. 10-12: Foreign and development ministers in G-7 countries meet in the United Kingdom.

Dec. 14: The U.N. Security Council is scheduled to meet for discussions on the war in Yemen and nonproliferation issues.

St. Javelin. With Ukraine likely to get more Javelin anti-tank missiles, someone on the internet has mocked up an image of a Slavic religious figure holding a rocket launcher. Meanwhile, the Ukrainian government’s meme game is also getting stronger, as its official Twitter account proves.

MasterClass. Our friends at Bloomberg have put together a hilarious list of fictional (and politically controversial) MasterClass lessons they would love to take. Among the best: former Rep. Anthony Weiner apologizing profusely (and repeatedly) to viewers, a blurred-out anonymous former member of Congress explaining how to get rich as a lobbyist, and former U.S. President George W. Bush teaching painting while saying nothing about politics.

You are commenting as . Change your username | Log out
Tags: North America, Security, United States

NEW FOR SUBSCRIBERS: Want to read more on this topic or region? Click + to receive email alerts when new stories are published on Security, United States, North America