Violence Spreads in the Sahel

Burkina Faso’s government resigns amid protests and the military’s failure to counter Islamists.

By Nosmot Gbadamosi, a multimedia journalist and the writer of Foreign Policy’s weekly Africa Brief.
December 15, 2021, 5:04 AM

The highlights this week: Benin’s opposition leaders jailed, Malawi officials arrested for misleading the IMF, and Ghana closes its borders to travelers who refuse COVID-19 vaccines.

The highlights this week: Benin’s opposition leaders jailed, Malawi officials arrested for misleading the IMF, and Ghana closes its borders to travelers who refuse COVID-19 vaccines.

Armed groups have multiplied across West Africa, and the violence in Mali and northern Nigeria has spread to bordering countries. In Burkina Faso, more than 1 million people have been displaced. Burkina Faso’s poorly managed military has been struggling to contain a conflict that began in Mali in 2012 and spread as jihadis reorganized elsewhere.

The deadliest incident came in November when over 50 people, mostly military police officers, were killed by armed groups at a security post near the northern town of Inata. Burkinabes were angry over news that those officers had gone two weeks without food rations prior to the attack.

The decades-old conflict is more complicated than groups linked to the Islamic State and al Qaeda. Security analysts say the violence is a symptom of deeper, unresolved issues, namely ineffective governance, impunity for government officials who abuse civilians, a lack of job opportunities, and extreme climate shifts. Youth anger on those issues provides a powerful stimulus for jihadi groups that seek to recruit among the local population.

In rural areas, people have been experiencing difficulties for a long time around access to public services and justice, said Ibrahim Yahaya Ibrahim, senior Sahel analyst at the International Crisis Group. The knock-on effect of jihadi recruitment from nomadic Fulani pastoralists is that “the Zarma [people] are organizing militias to try to fight back.” What began as a conflict between jihadis and the state has ended up becoming a conflict between locals.

Does talking to terrorists work? In March, secret negotiations between Burkina Faso’s government and jihadis coincided with a sharp drop in deaths. Over the last few months, communities have also opened dialogues. They’ve had success in central Mali and northern Burkina Faso, Ibrahim said. But that reduction is “precarious as long as we do not have a larger and top-level dialogue.”

Senegalese Foreign Minister Aïssata Tall Sall called on China “to be a strong voice in support of Senegal and all the countries involved in the problem of insecurity in the Sahel” at the China-Africa summit this month. But analysts believe China is unlikely to get involved, because it could end up stuck in a conflict with no apparent end.

Will Russia replace France? As France begins a drawdown of its 4,500 soldiers deployed in the Sahel, Mali’s military rulers want to fill that vacuum with the Russian security firm known as the Wagner Group. But experts say the presence of more foreign troops will not solve the crisis. There is already growing hostility from locals against French troops over civilian deaths.

“One of the biggest problems with foreign troops is that they do not understand the context of the violence, this is a very locally ingrained violence with a lot of intricacies between different communities,” Ibrahim said. “At least the French can speak a language that some local people understand.”

Friday, Dec. 17: Senegal hosts an oil and gas conference. The secretary-general of OPEC is among the speakers. 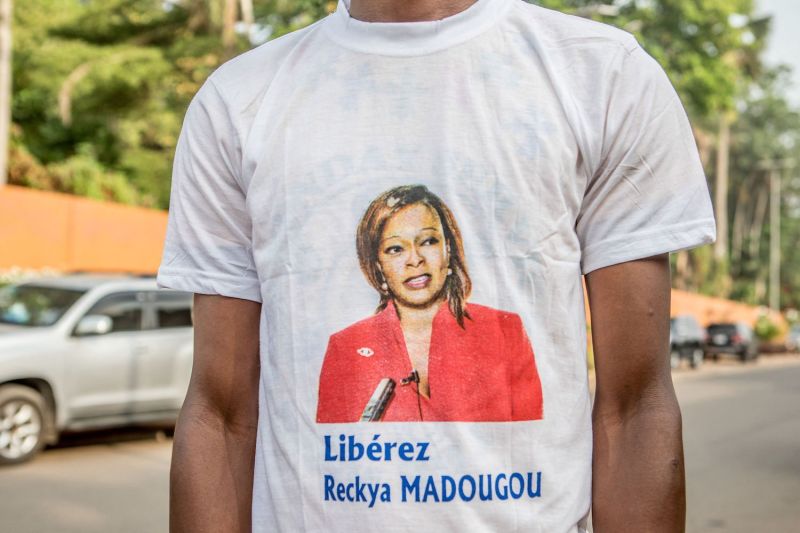 Supporters of Reckya Madougou gather at the Court of Repression of Economic Offences and Terrorism (CRIET), in Porto-novo, Benin, on Dec. 10.YANICK FOLLY/AFP via Getty Images

Benin jails opposition leaders. Benin’s opposition leader Reckya Madougou was sentenced on Saturday to 20 years in prison for allegedly financing terrorism. Madougou, who is Benin’s first ever female presidential candidate for a major party, was arrested and jailed in March alongside several opposition candidates just before an election in April. Critics say the special Economic Crime and Terrorism Court set up in 2016 by Beninese President Patrice Talon is being used by his regime to crack down on the opposition.

On Tuesday, the same court sentenced opposition candidate Joël Aïvo to 10 years in prison, and in March the exiled opposition figure Sébastien Ajavon received a 25-year sentence after a trial in absentia. Talon, a 63-year-old cotton industry multibillionaire, was first elected in 2016—ironically on a policy to reduce executive powers and limit presidential terms to five years.

In April he ran practically unopposed, with his main challengers in jail, exiled, or disqualified by his orders. Amid violent protests, he won a second term with 86 percent of the vote. Despite glaring democratic backsliding, Talon and then-U.S. Secretary of State Mike Pompeo met in Washington in January 2020 to discuss how to increase bilateral trade and counterterrorism in the Sahel, prompting tough words from Benin’s former ambassador to the United States.

Ghana says, “No vaccine, no entry.” Ghana will vaccinate returning citizens and residents against COVID-19 upon arrival at the airport and charge airlines $3,500 for every passenger flown into the country who isn’t fully vaccinated. “If you decide to come, then it means that you want to be vaccinated,” the head of Ghana’s Health Service, Patrick Kuma-Aboagye, told the BBC.

In strict measures that came into force on Monday, unvaccinated Ghanaians are banned from flying out. Health officials said the majority of Ghana’s coronavirus cases are among people coming from abroad who were unvaccinated. Ghanaian public sector and health workers will face mandatory vaccination from Jan. 22, 2022.

“As a result of this scheme, the IMF suspended the said extended credit facility to the prejudice of innocent and ordinary Malawians,” police spokesman James Kadadzera said in a statement. Mwanamvekha faces additional charges over the 2015 “fraudulent” sale of state-owned Malawi Savings Bank.

Thom Mpinganjira, a businessman who bought the bank, was sentenced to nine years in prison in October for attempting to bribe judges to rule in favor of ex-President Peter Mutharika in the annulled 2019 presidential elections. (Members of Mutharika’s party say the charges are politically motivated.)

U.S. anti-graft sanctions. The United States will deny visa entry to Congolese businessman Alain Mukonda for aiding sanctioned Israeli billionaire Dan Gertler, who is accused of corruption in the Democratic Republic of the Congo’s lucrative mining and oil business.

Under the Global Magnitsky Act, the U.S. Treasury blacklisted an additional 12 entities linked to Mukonda. Gertler was first sanctioned by the United States in 2017 for using his close friendship with former Congolese President Joseph Kabila to amass vast wealth in opaque mining deals.

Between 2010 and 2012 alone, Congo lost nearly $1.4 billion in revenues from the underpricing of mining assets that were sold to offshore companies linked to Gertler, according to the U.S. Treasury. Congo is suing Gertler to reclaim rights on two undeveloped oil block concessions. The sanctions came as U.S. President Joe Biden’s administration released a new strategy on countering corruption.

No hiding. A member of Kenya’s biggest Afro-pop band, Sauti Sol, risked over a decade behind bars by coming out as gay last week. His public revelation was a courageous move in a country where gay sex is punishable by up to 14 years in prison.

Willis Austin Chimano made the announcement when explaining the idea behind his solo single “Friday Feeling.” The accompanying music video released last week features members of the LGBT community.

“It is just a representation of the underground ballroom culture within the queer community … which I am part of,” he told the Standard. “There is no more hiding,” Chimano said, echoing the lyrics of his song. Sauti Sol was crowned Africa’s Best Group at the MTV Africa Music Awards in 2016.

Chimano’s comments have received support from Kenyans; the video had garnered over 400,000 views on YouTube in less than a week. Although the gay sex ban is rarely enforced, Kenya’s high court rejected a petition to repeal it in 2019. Despite anti-gay laws, public attitudes toward LGBT celebrities within Africa’s creative industries are becoming more liberal. However, blackmail, violence, and physical and sexual abuse against other LGBT people remain common.

In West Africa, Nigeria, Burkina Faso, and Mali are the countries most impacted by terrorism-related attacks. Recently, negotiations with armed groups have led to a drop in violence, but analysts believe this is temporary.

South Africa’s police brutality problem. In January 2020, South African police Sgt. Giovanni Gabriels led a joint operation with the Army to arrest individuals accused of possessing or dealing drugs. Days after the operation, one of the men arrested, 36-year-old Adam Isaacs, died in a hospital from “blunt force trauma injuries.” Witnesses linked Gabriels to the assault—at the time, he already had six departmental investigations against him.

The police service appeared to have no way to deal with commanders who protect brutal cops, South Africa’s Viewfinder found. Since the 2012-2013 financial year, more than 10,000 South African police officers had disciplinary actions recommended for assault, torture, rape, or unlawful killings. Only 50 were suspended, pending the outcome of their cases.

Egypt’s illegal orphan marriages. Underage orphaned girls in Egypt are being sold to older men by the welfare homes meant to safeguard them. Arab Reporters for Investigative Journalism found in one incident, a 15-year-old girl was married off to a 32-year-old man after a new ID card was obtained from the Ministry of Health to falsify her age.

Even though marriage under the age of 18 is illegal nationwide, it is common. In some cases, marriages arranged in the welfare home went undocumented because Egyptian laws ban child marriage certificates but don’t criminalize the marriages themselves. Egypt’s government body responsible for vulnerable citizens denied the claims and said “only five to 10 percent of girls at orphanages are married.”

Nosmot Gbadamosi is a multimedia journalist and the writer of Foreign Policy’s weekly Africa Brief. She has reported on human rights, the environment, and sustainable development from across the African continent. Twitter: @nosmotg

You are commenting as . Change your username | Log out
Tags: Burkina Faso, Terrorism
Latest