Ukraine’s Military Has Come a Long Way Since 2014

But so have Russia’s armed forces—making any conflict more of a toss-up than a walkover.

Western officials are unsure whether Russian President Vladimir Putin has made a final decision to launch another invasion of Ukraine, but they are furiously working to build up a package of responses to deter Russia and bolster Ukraine’s ability to defend itself—which is already a lot better than it was seven years ago.

When Russian troops invaded eastern Ukraine in 2014 and occupied the Crimean Peninsula, they faced little resistance from a decrepit Ukrainian military—inexperienced, hollowed out by decades of corruption, and lacking the most basic supplies, such as medical kits, boots, and proper helmets. Now, after years of reform and billions of dollars of security assistance from the United States, the Ukrainian military is battle-hardened and highly motivated after seven years of conflict with Russian-backed rebels in Ukraine’s separatist-held Donbass region.

“It’s certainly not going to be an easy operation. It’s not going to be a quick victorious war [for Russia],” said Andrii Zagorodniuk, who served as Ukraine’s defense minister from 2019 to 2020.

Western officials are unsure whether Russian President Vladimir Putin has made a final decision to launch another invasion of Ukraine, but they are furiously working to build up a package of responses to deter Russia and bolster Ukraine’s ability to defend itself—which is already a lot better than it was seven years ago.

When Russian troops invaded eastern Ukraine in 2014 and occupied the Crimean Peninsula, they faced little resistance from a decrepit Ukrainian military—inexperienced, hollowed out by decades of corruption, and lacking the most basic supplies, such as medical kits, boots, and proper helmets. Now, after years of reform and billions of dollars of security assistance from the United States, the Ukrainian military is battle-hardened and highly motivated after seven years of conflict with Russian-backed rebels in Ukraine’s separatist-held Donbass region.

“It’s certainly not going to be an easy operation. It’s not going to be a quick victorious war [for Russia],” said Andrii Zagorodniuk, who served as Ukraine’s defense minister from 2019 to 2020.

Since 2014, the United States has given $2.5 billion to support the development of the country’s armed forces, including Humvees, patrol boats, radar systems, and anti-tank Javelin missiles. But with Russian troops massing on Ukraine’s borders, U.S. officials are weighing requests by Kyiv for further assistance, including support to plug substantial gaps in the country’s air and naval defense capabilities, as Ukraine’s navy lost 70 percent of its vessels following the occupation of Crimea. This month, U.S. officials were dispatched to Kyiv to asess the country’s air defense needs, a Ukrainian defense official told Foreign Policy.

During a recent visit to Washington, Ukrainian Defense Minister Oleksii Reznikov also asked if military equipment initially earmarked for Afghanistan could be redirected to Ukraine, including U.S.-owned Soviet-era Mi-17 helicopters that are already in the country undergoing repairs.

An aspiring member of NATO—one of the causes of Putin’s ire over the past decade, a theme he and other senior Russian officials have hammered repeatedly this week—Ukraine has sought to bring its military up to the alliance’s standard by bolstering civilian control over the armed forces, strengthening its ability to interoperate with NATO forces, and pursuing broader democratic and security sector reforms.

In September, 6,000 soldiers from more than a dozen countries took part in a Ukrainian-led, U.S.-assisted exercise as part of NATO’s Partnership for Peace program. U.S. President Joe Biden and NATO Secretary-General Jens Stoltenberg have both ruled out the possibility of intervening militarily to defend Ukraine in the event of a conflict but have warned that Russia would face punishing economic reprisals should it launch an attack.

In some ways, Ukraine has gone further than most NATO members. Since 2013, Ukraine’s military spending has jumped from 1.6 percent as a share of the country’s GDP to just over 4 percent last year, according to data from the Stockholm International Peace Research Institute. But it’s all relative. Russia has 900,000 active-duty personnel compared with Ukraine’s 209,000, according to the International Institute for Strategic Studies, and is vastly outgunned in terms of equipment and aircraft.

Even while ramping up defense spending, Ukrainian officials have made reforming the country’s sprawling state defense conglomerate, Ukroboronprom, a core part of their anti-corruption strategy. Progress has been mixed. A recent study by Transparency International of the world’s largest arms manufacturers rated the agency very poorly on several anti-corruption and transparency measures.

Other reforms are far from finished. “The Ukrainian military retains some substantial structural deficits, and important parts of it remain unreformed,” said Michael Kofman, an expert on the Russian armed forces with the think tank CNA.

One of those deficits is in the air. Ukraine has been slow to build up integrated air defenses and needs help on everything from radars to anti-aircraft missiles to command and control, said Alexander Gray, a senior fellow at the American Foreign Policy Council who served as the National Security Council’s chief of staff during the Trump administration. A former senior U.S. defense official, speaking on condition of anonymity, said Ukraine also needed to coordinate air defense to discriminate targets and get new coastal defense missiles.

In recent years, the Ukrainian air force has also experienced a huge exodus of experienced pilots, the Kyiv Post reported this summer, with many fed up with what they saw as senseless bureaucracy, low pay, and poor working conditions. Many of Ukraine’s military aircraft, bequeathed from Soviet-era arsenals, are reaching the end of their useful life.

Jim Townsend, a former deputy assistant secretary of defense for Europe and NATO during the Obama administration, said Russia is likely to move forward S-400 air defense batteries to complement its advance, creating no-go zones for Ukrainian air power. Making matters worse, Russia could use missiles to knock out Ukraine’s runways, airports, and fighters on the ground, Townsend said. 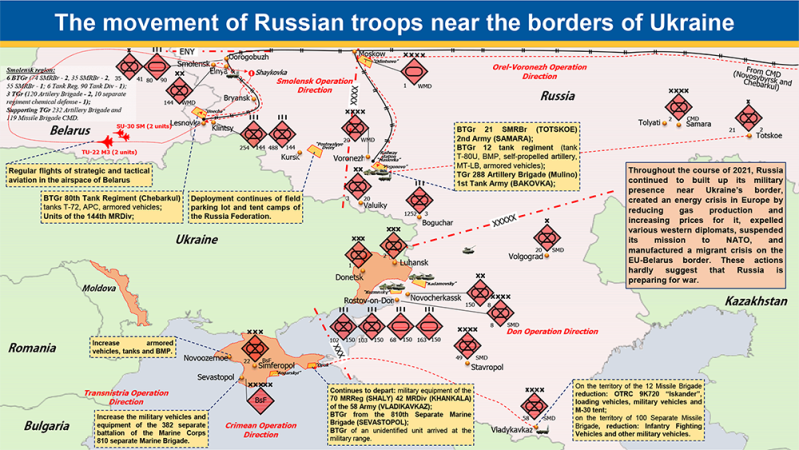 Near the border, Russia has four brigades manning Iskander ballistic missiles, which can reach much of Ukraine, said Rob Lee, an expert on the Russian armed forces and a doctoral candidate at King’s College London. “Ukraine doesn’t have a good response. They don’t have comparable systems in that regard.”

And that’s the problem: While Ukraine has gone to great lengths to bolster its military, so, too, has Russia. The 2008 war with Georgia gave Russian military planners a rude awakening, as their operations against the much smaller country were beset by instances of friendly fire, poor command and control, and equipment failures. Starting in 2009, sweeping efforts were made to overhaul the armed forces, modernize equipment, and shift from a conscript army to a professional force. They’ve also had the opportunity to road-test these reforms in Syria and Ukraine. A 10-year effort to modernize Russian weapons systems, which began in 2010, was only partially complete during the 2014 invasion of Ukraine.

“The Russian military today looks quite different from the military that fought in Ukraine in 2014 and 2015,” Kofman said. “This is a military that has been both bloodied and honed after a period of tumultuous reforms.”

The Biden administration still hopes there is some room for talks. It’s not clear that Putin has decided to invade, officials said, despite Russian demands to remove U.S. and NATO troops from countries of the former Soviet Union and halt any eastward expansion of the alliance. A senior administration official, speaking on condition of anonymity to discuss ongoing policy talks, said the United States is hoping to engage Russia in talks at the NATO-Russia Council, the Organization for Security and Cooperation in Europe, or the bilateral channel set up by Biden and Putin this year after their Geneva meeting. The official said Biden had directly conveyed to Putin that coordinated sanctions would be coming Russia’s way if there were an invasion.

Still, there has been a common refrain among U.S. officials in the last three administrations since Russian units first moved into the Donbass in 2014: Russia is not 10 feet tall. Moscow’s military, which features elite combat units that can sustain conventional fighting for long periods of time, is still facing the strain of seven years of fighting in the Donbass, experts said.

Gray, the former NSC official, said Russia struggles to maintain its armored forces—which would likely serve as the tip of the spear in a deeper plunge into Ukraine—and has a relatively small pool of tanks and mechanized infantry vehicles. That means Moscow could have to pull units from other military theaters, especially if Javelins provided by the United States find their target in Russian formations. And the conflict in nearby Nagorno-Karabakh, which saw Azerbaijan use off-the-shelf drones with loitering munitions to pick off vehicles from the sky, shows that tanks and armored vehicles could be more vulnerable in combat than ever. And it’s not all new kit that’s being fielded: Some Russian units are still stuck with out-of-date equipment, he said.

“This is not an easy task for them,” Gray said. “They would be going so far out on a limb to engage in a conventional, high-intensity invasion.”

One former senior defense official said that while Russia has demonstrated its capabilities in exercises, it has yet to undertake a military operation as complex as a deeper invasion into Ukraine since the end of the Cold War.

Cybersecurity experts have also tracked a dramatic increase in Russian hacking of Ukrainian government and civilian networks since the beginning of the month, a possible effort to prepare the battlefield before invasion. But there are different levels of preparation. Ukraine’s armed forces are battle-hardened, with all combat-ready troops having already served on the front lines in the simmering conflict in the Donbass. After seven years of war, they’re also highly motivated. While senior Russian officials have tried to whip up a casus belli, accusing the West of provocation, it’s unlikely to prove as inspirational for their troops.

“Russian forces have no idea why they should be participating in this war,” Zagorodniuk said.

Ultimately, how the two militaries will fare in the event of a war depends on what kind of operation Russia launches and what the Kremlin’s goals are. “All wars are inherently unpredictable,” Lee said. Efforts to occupy new territory would be a bloody slog, which would be met with fierce resistance by the Ukrainian army and the civilian population. But if the goal is to force concessions from Ukrainian President Volodymyr Zelensky?

“You do that by inflicting pain and making the situation unsustainable for Kyiv,” Lee said.

You are commenting as . Change your username | Log out
Tags: Eastern Europe, Military, Ukraine

Kyiv’s pleas for more U.S. guns to hold off Moscow have prompted a political knife fight in Washington.