The Iran Nuclear Deal’s Long Year of Negotiations and Uncertainty

U.S. President Joe Biden’s plans for Iran were straightforward enough. He campaigned on restoring the Iran nuclear deal that had originally been negotiated when he was vice president under Barack Obama—and that then-President Donald Trump abandoned in 2018.

Reinstating the deal, formally known as the Joint Comprehensive Plan of Action (JCPOA), wasn’t entirely up to Biden, though. Iran also had a say—and it remains unclear what exactly its preferences are.

The Iranian government’s composition changed dramatically over the course of 2021. It started the year with an administration led by President Hassan Rouhani and Foreign Minister Mohammad Javad Zarif—the very people responsible for reaching the deal with the United States in the first place

U.S. President Joe Biden’s plans for Iran were straightforward enough. He campaigned on restoring the Iran nuclear deal that had originally been negotiated when he was vice president under Barack Obama—and that then-President Donald Trump abandoned in 2018.

Reinstating the deal, formally known as the Joint Comprehensive Plan of Action (JCPOA), wasn’t entirely up to Biden, though. Iran also had a say—and it remains unclear what exactly its preferences are.

The Iranian government’s composition changed dramatically over the course of 2021. It started the year with an administration led by President Hassan Rouhani and Foreign Minister Mohammad Javad Zarif—the very people responsible for reaching the deal with the United States in the first place

After Iran’s June election, though, its president became Ebrahim Raisi—a notorious conservative who has repeatedly questioned the original design of the JCPOA. That view seemed to be backed by Iran’s ultimate decision-maker, Supreme Leader Ali Khamenei, who has long argued the West could never be trusted to uphold its side of any diplomatic deal.

Iranian policymakers’ preferences aside, it’s clear Iran’s leverage has increased over the past year. Dating back to the Rouhani administration, Iran responded to the U.S. exit from the deal by ceasing its own cooperation with the international monitoring regime that had been keeping tabs on its nuclear infrastructure and by ramping up its enrichment efforts.

By most accounts, despite sabotage efforts presumed to be led by the U.S. and Israeli governments, Iran is closer now to possessing weapons-grade nuclear material than it was before it entered the JCPOA in the first place.

The result has been diplomatic stagnation. In December, the parties to the agreement met again in Vienna—the seventh time they gathered in the Austrian capital to find a way of restoring the deal, and the first time since Raisi’s election.

Reports from the ongoing negotiations confirmed the indications going in: that Iran was interested only in reentering an arms control agreement with the West under substantially different terms. The Iranian government has demanded the West fully rescind all extant sanctions, including those unrelated to its nuclear program—even while refusing to directly negotiate at all with the United States.

It’s not yet clear how the negotiations will ultimately shake out. But if you want to know how we got where we are today, here are five Foreign Policy pieces from 2021 that will bring you up to speed.

1. Did Biden Wait Too Long to Engage Iran?

The Biden administration took office with the goal of reestablishing the JCPOA, but it offered little clarity on how exactly it intended to achieve that goal in practice.

FP senior correspondent Michael Hirsh charts how the efforts played out in the administration’s early months. Factional infighting and a desire to maintain ties with Iran hawks in Congress kept the Biden administration from making any preemptive concessions to the Iranians, which prevented any quick progress from being made toward restoring the deal.

“Perhaps the biggest misstep for the Biden team, some critics say, is that by taking a hard line, they have reawakened old fears in Tehran dating back decades that Washington will always renege on a deal and end up demonizing Iran,” Hirsh writes.

2. The Threat of War Is the Only Way to Achieve Peace With Iran

Biden has been clear about his desire to restore the JCPOA. Yet Dennis Ross, a distinguished fellow at the Washington Institute for Near East Policy and former national security official in several U.S. administrations, argues this eagerness may have had the unintended effect of convincing the Iranian government it could get away with ramping up its nuclear activities.

“The loss of Iranian fear about what they can get away with on their nuclear ambitions is dangerous,” Ross argues. “It may produce a miscalculation on Iran’s part about whether the United States might ever respond militarily and for sure makes a diplomatic outcome less likely.”

Sabotage of the Iranian nuclear program, Ross writes, has proved to be an insufficient deterrent. Instead, Iran must come to believe that the threat of a military attack on its infrastructure is real. “[U]nless the Iranians understand that the pathway they are on is dangerous for them,” Ross writes, “the probability of the use of force will go up.”

3. Iran Is Starting to Want the Bomb

Maysam Behravesh, who served as an intelligence analyst and foreign-policy advisor with Iran’s Ministry of Intelligence and Security from 2008 to 2010, examines the unintended consequences of Trump’s maximum pressure campaign against Iran, and what he finds is worrying.

Behravesh surveys Iranian officials’ public statements and concludes that they “seem to increasingly see the weapon not just as an ultimate deterrent but as a panacea for Iran’s chronic security problems and challenges to its sovereignty by foreign powers.” 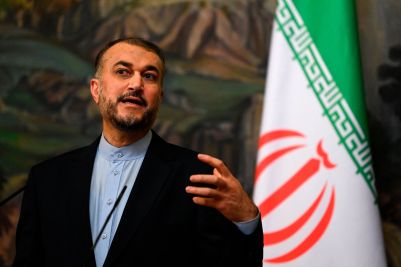 Plenty has been written about Raisi’s conservative background. Sajjad Safaei, a postdoc fellow at Germany’s Max Planck Institute for Social Anthropology, takes a different tack, focusing instead on the people Raisi has chosen to lead Iran’s diplomatic efforts on the nuclear deal.

Safaei concludes that the Iranian government’s negotiating team primarily suffers not from its ideological radicalism but rather its lack of technical skill: Iran’s foreign minister and chief nuclear negotiator aren’t zealots but hapless bumblers, Safaei argues. “​​None of this is to suggest that Iran’s negotiators are inevitably doomed to fail,” Safaei writes. But, he concludes, “the odds are stacked against them.”

5. Why Raisi Is the West’s Best Hope for a Deal With Iran

The ideological and diplomatic challenges involved in getting the Raisi administration to agree to again adhere to the JCPOA are clear enough. Vali Nasr, the Majid Khadduri professor of Middle East studies and international affairs at Johns Hopkins University’s School of Advanced International Studies, focuses on a different point: that Raisi, precisely because of his conservative bona fides, may be the best-positioned person to persuade other Iranian elites, including Khamenei, to commit to cooperative relations with the West for the long term—an Iranian version of U.S. President Richard Nixon going to China.

“A moderate, or even a moderate conservative president, would be at a disadvantage in managing reaction from hard-liners,” Nasr writes. “Now, with Raisi as president, hard-liners will own the difficult decision” to agree to return to the nuclear deal “and will have to defend and implement it—and if a deal is signed, the detractors will fall into line.”

NEW FOR SUBSCRIBERS: Want to read more on this topic or region? Click + to receive email alerts when new stories are published on U.S. Foreign Policy, Iran