How Narendra Modi Nearly Lost His Way in 2021

India’s farmers’ protests and COVID-19 catastrophe may have slowed the prime minister’s rise.

Indian Prime Minister Narendra Modi, now halfway through his second term, has had a long year.

His government faced large-scale protests by farmers opposed to new agricultural laws that carried over into 2021, drawing international criticism. In April, India became the epicenter of the COVID-19 pandemic, with catastrophic effects. The government accepted outside aid for the first time in 16 years, and many observers attributed the crisis to government mismanagement.

Indian Prime Minister Narendra Modi, now halfway through his second term, has had a long year.

His government faced large-scale protests by farmers opposed to new agricultural laws that carried over into 2021, drawing international criticism. In April, India became the epicenter of the COVID-19 pandemic, with catastrophic effects. The government accepted outside aid for the first time in 16 years, and many observers attributed the crisis to government mismanagement.

On the world stage, Modi’s stardom dimmed somewhat amid widely acknowledged democratic backsliding. But India’s strategic partnership with Australia, Japan, and the United States—known as the Quadrilateral Security Dialogue (or Quad)—gained momentum, seeking to counter China’s rise in the Indo-Pacific. And in December, Modi received special treatment at U.S. President Joe Biden’s virtual Summit for Democracy.

All the while, Modi has paid careful attention to his personal brand in India and beyond. Although the prime minister’s popularity took a hit during the coronavirus crisis, his approval rating in November sat at 70 percent—one of the highest among world leaders.

Here are five Foreign Policy stories that examine Modi’s ups and downs in 2021.

Modi started off the year with criticism from activists and celebrities—including singer Rihanna and climate change activist Greta Thunberg—in support of the farmers’ protests. Rather than responding with a bland public statement, his government dug its heels in and condemned the comments as meddling. FP’s Sumit Ganguly argues such hypersensitivity undermines India’s global standing. “The tendency toward defensiveness has really come to the forefront under the second Modi government, which came to office in April 2019,” he writes.

India’s democratic image has undoubtedly suffered under Modi, as his government continues to crack down on journalists and dissenters. “Unfortunately, this process amounts to a spiral: As the country’s image takes a battering, it gets more defensive and, in turn, its standing declines further,” Ganguly writes. Take, for example, Modi’s decision in March to create his own democracy ranking after Freedom House downgraded India in its annual report.

For now, Modi has concluded that India’s declining soft power is a small price to pay for carrying out the BJP’s political agenda—and eventually, the criticisms will wane. But that is a risky bet. “Even if the Modi administration believes it can withstand international raised eyebrows, it might not fare as well under the glare of its own citizens,” Ganguly writes.

In early April, India saw a major spike in COVID-19 cases, giving rise to a devastating second wave. By May 1, India recorded more than 400,000 new cases in a 24-hour period. Hospitals ran out of oxygen, crematoriums ran out of space, and people turned to social media for help. Kapil Komireddi, author of Malevolent Republic: A Short History of the New India, lays blame squarely with Modi, calling the country’s crisis “a carnage precipitated by the conduct of its self-enamored leader.”

Modi had declared victory in India’s fight against COVID-19 only a few months earlier. In the weeks that followed, thousands of people crowded political rallies ahead of state elections and participated in the world’s largest religious gathering—the Hindu festival of Kumbh Mela—which Modi allowed to take place a year early. Had Modi heeded warnings of a second wave, Komireddi argues, he could have averted such an extreme crisis. “But rather than bolstering India’s capacities, Modi used the virus to burnish his cult and pillage the country,” he writes.

The government’s handling of the crisis earned Modi furious criticism within India and may have contributed to the BJP’s poor showing in West Bengal’s state elections. But its effects on the prime minister’s legacy remain unclear. The next general election isn’t until 2024, and “Indians are a forgetful people when it comes to the misdeeds of politicians,” Komireddi argues. “Modi will count on their forgetfulness.”

3. The End of Modi’s Global Dreams

by Sushant Singh, May 3

Modi’s handling of India’s second COVID-19 wave also undermined some of his foreign-policy aspirations. As the situation grew dire, his government—which prided itself on self-reliance—accepted aid from nearly 40 countries.

Sushant Singh, a senior fellow with the Centre for Policy Research in India, said the crisis represented a “moment of reckoning” for Modi on the global stage. “No doubt, New Delhi will be able to regain a certain sense of normalcy in a few months, but the mishandling of the pandemic has dealt it a weaker hand in ongoing backchannel talks with Islamabad and border negotiations with Beijing,” he writes.

Singh also argues that Modi’s massive vaccine export campaign created significant obstacles to the country’s own vaccination rollout. “Having exported doses in a quest for personal glory, Modi is now awaiting 20 million doses of AstraZeneca vaccines from the United States,” he writes. India, a major contributor to the United Nations COVAX initiative, paused COVID-19 vaccine exports amid the second wave and only resumed them in October.

4. Modi Took Complete Control of Kashmir Two Years Ago—and Got Away With It 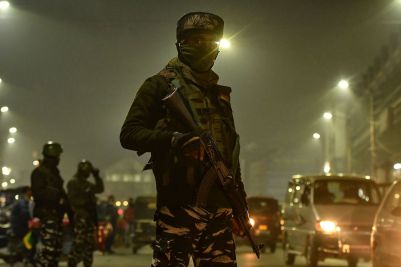 Paramilitary troopers stand guard on a street in Srinagar, the capital of Indian-administered Kashmir, on Dec. 2.Tauseef Mustafa/AFP via Getty Images

In August 2019, Modi’s government revoked Indian-administered Kashmir’s special autonomous status, raising fears of violence in the Muslim-majority region and the possibility of war with Pakistan. But when U.S. Secretary of State Antony Blinken visited India this year, “Kashmir was not a major issue even if spoken about behind closed doors,” FP’s Anchal Vohra writes.

That’s because, as Vohra explains, Modi and the BJP are exerting their will in Kashmir, having largely succeeded in suppressing protests or dissent in the region. “For the first time in a long time, there is peace on the de facto border between India and Pakistan, cross-border infiltration has paused, and militancy has dipped,” she notes. However, such “successes have not been good news for average Kashmiris, who feel politically disenfranchised and silenced into acquiescence. Most Kashmiris welcomed dividends of peace but not being forced to capitulate to New Delhi’s wishes.”

For now, India appears to have the upper hand over Kashmir in the disputed region, and the prime minister has enacted control. “But Modi and his government are a long way off from reducing the distance between New Delhi and the Kashmiris,” Vohra writes.

5. Why Modi Is Suddenly Everywhere

By October, Modi had put himself back in the public eye: Snigdha Poonam, an independent journalist in New Delhi, writes he was “everywhere at once: newspaper ads, billboards, social media livestreams, the backs of municipal trucks, even vaccine certificates.” The BJP intensified efforts to boost Modi’s personal brand, aiming to separate him from the government’s mishandling of the coronavirus crisis, particularly among his loyal base. The party has promoted his association with successful social schemes, such as those providing hot meals for schoolchildren or releasing funds for the needy.

“Modi now aims to undo the political damage of the coronavirus catastrophe—while refusing to be held accountable for it—by promoting his own large-heartedness,” Poonam writes. But some of the public relations stunts backfired. Meanwhile, India’s full vaccination rate remains low, and another COVID-19 wave is a concern.

Winning the state election in Uttar Pradesh set for February and March 2022 could be critical for the BJP and Modi’s brand. If the ruling party loses, Poonam writes: “Modi will do his utmost to distance himself from the loss. His face may again fade from view—at least for a time—but then he might be back. He knows the drill.”

You are commenting as . Change your username | Log out
Tags: Health, India, Politics

NEW FOR SUBSCRIBERS: Want to read more on this topic or region? Click + to receive email alerts when new stories are published on Politics, Health, India