Welcome back to Foreign Policy’s SitRep! Hope everyone had a great holiday break and new year, and here’s hoping we all stick to our new year’s resolutions until at least, say, mid-February.

Alright, here’s what’s on tap for the day: Defense contractors resume donations to lawmakers who objected to the 2020 election results, North Korea claims it tested a hypersonic missile, and the top U.S. envoy for the Horn of Africa is leaving his job.

Welcome back to Foreign Policy’s SitRep! Hope everyone had a great holiday break and new year, and here’s hoping we all stick to our new year’s resolutions until at least, say, mid-February.

Alright, here’s what’s on tap for the day: Defense contractors resume donations to lawmakers who objected to the 2020 election results, North Korea claims it tested a hypersonic missile, and the top U.S. envoy for the Horn of Africa is leaving his job.

After a violent pro-Trump mob stormed the U.S. Capitol one year ago, many corporations vowed to pump the brakes on political campaign donations as the country reeled from the deadly riot’s political fallout. Defense contractors were quick to jump on the bandwagon.

“Boeing strongly condemns the violence, lawlessness and destruction that took place in the U.S. Capitol on January 6, 2021. Given the current environment, we are not making political contributions at this time,” announced one of the country’s largest aerospace companies less than a week after the deadly, botched pro-Trump insurrection.

But for at least six of the country’s largest defense contractors—including Boeing—those pledges didn’t last long. In the year since, these firms and other corporations have quietly turned back the tap on campaign donations to some of the 147 Republican lawmakers who voted against certifying the results of the 2020 elections based on wholly false claims of election fraud, according to a new study from the nonprofit watchdog group Accountable.US.

Here are the defense contractors and the total amount each firm donated to lawmakers who voted to overturn the election, according to the study:

The president of Accountable.US, Kyle Herrig, condemned the corporations’ decisions to resume campaign donations. “Major corporations were quick to condemn the insurrection and tout their support for democracy—and almost as quickly, many ditched those purported values by cutting big checks to the very politicians that helped instigate the failed coup attempt,” he said in a statement.

U.S. Special Envoy for the Horn of Africa Jeffrey Feltman is expected to step down from his post imminently, U.S. officials and administration insiders told SitRep. He is likely to be replaced by David Satterfield, a longtime career diplomat with extensive experience in the Middle East.

U.S. President Joe Biden has renominated dozens of State and Defense Department nominees who were not yet confirmed by the Senate during the last Congress.

Thomas Shannon Jr., former U.S. ambassador to Brazil and undersecretary of state for political affairs, has been selected to serve as the new board chairman of the American Academy of Diplomacy, according to a statement. He replaces Thomas Pickering, former U.S. ambassador to the United Nations, who served in high-ranking State Department roles in the George H.W. Bush and Clinton administrations.

Pyongyang hyped. North Korea claimed on Thursday to have successfully tested a hypersonic missile, a step that could drastically heighten the Hermit Kingdom’s potential threat to the United States and its allies in the Asia-Pacific. Hypersonic missiles—representing some of the latest weapons technology that is being developed by the United States, Russia, and China—can fly at five times the speed of sound and lower to the ground than ballistic missiles, making early warning and radar detection significantly more difficult.

Unstoppable force, meet immovable object. And speaking of threats, this week, Japan’s defense ministry announced it would begin developing railguns to counter hypersonic missile threats. They expect to have upgraded intercept systems before the end of the decade, as Nikkei Asia reports. So the East Asia arms race continues.

A revolution in Central Asia? An unprecedented wave of anti-government protests swept through Kazakhstan this week. The protests, triggered by demonstrations against fuel price hikes, present the biggest challenge to former ruler Nursultan Nazarbayev’s legacy, who was in power for nearly three decades. A regional security alliance led by Russia announced it would dispatch a contingent of military “peacekeepers” to Kazakhstan’s capital to restore order, the Diplomat reports.

Let’s try and talk this out. NATO Secretary-General Jens Stoltenberg announced he would convene a meeting on Jan. 12 with senior Russian officials to try and quell the crisis in Ukraine as Moscow threatens to again invade its eastern neighbor, which is increasingly turning to the West. If you need a primer on that crisis and why Russia is making moves that seem to indicate another invasion is coming, our colleague Amy MacKinnon has you covered. 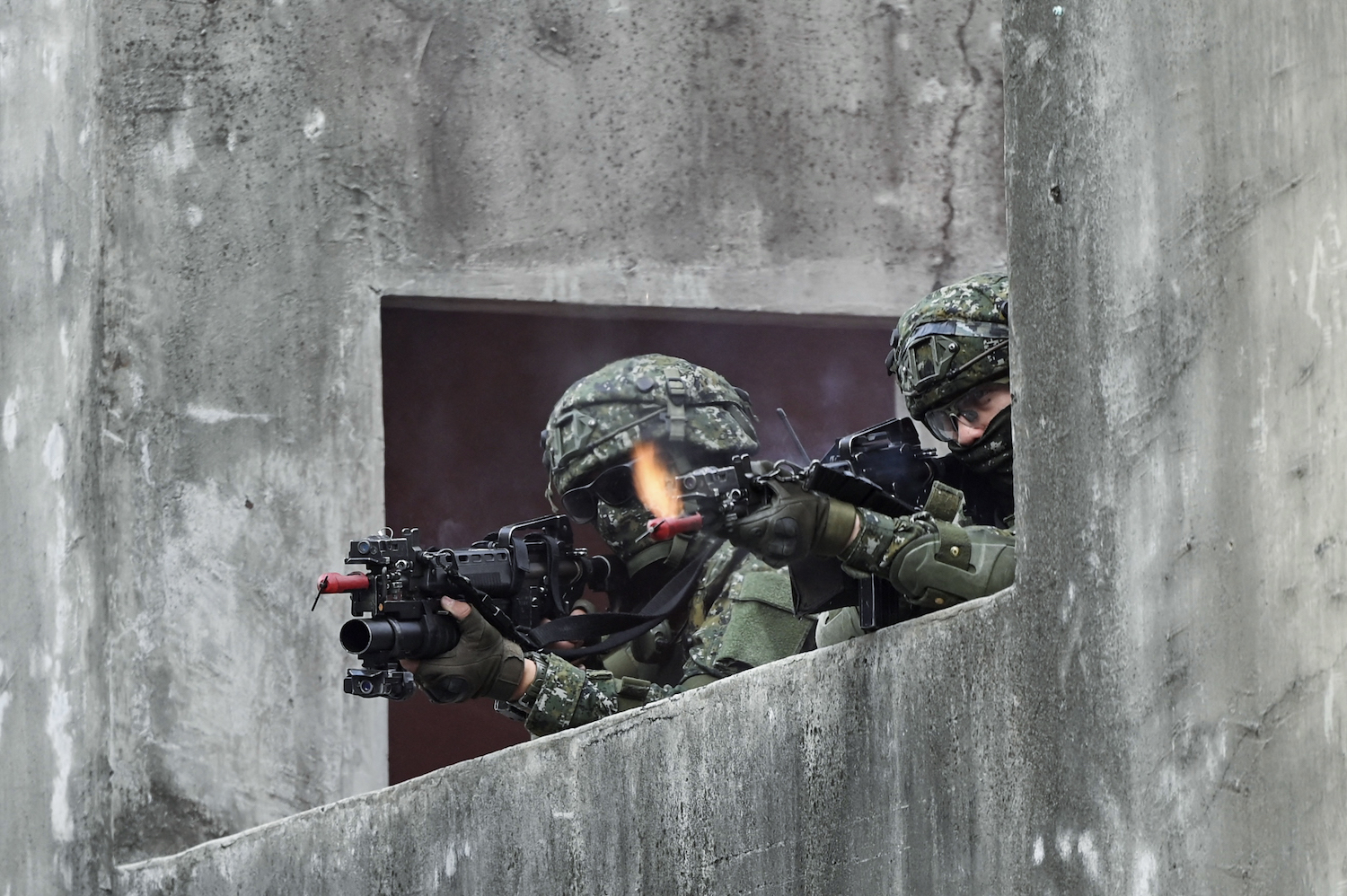 Taiwanese soldiers take part in a military exercise at an army base in Kaohsiung in southern Taiwan on Jan. 6.Sam Yeh/AFP via Getty Images

Specs on the mountainside. It’s officially the doldrums of winter (and there’s a new COVID-19 variant), which means your SitRep hosts are spending a lot of time staring longingly out the window thinking about the places that are too cold and virus-wracked to visit.

But if there’s one thing on Netflix that has soothed our wanderlust, it’s The Alpinist, an incredible new Netflix documentary that tracks the late free solo climber Marc-Andre Leclerc as he summited Torre Egger in Patagonia and the Emperor Face of Mount Robson in the Canadian Rockies, feats not previously achieved.

Mon, Jan. 10: The U.S. House of Representatives reconvenes after its holiday break.

Mon, Jan. 10: U.S. and Russian officials meet to discuss Moscow’s military buildup on the Ukrainian border at U.S. State Department-led talks in Geneva. That meeting will be followed by a rare convening of the NATO-Russia Council on Jan. 12 and the Organization for Security and Cooperation in Europe later in the week.

“I now fear that what we have fought so hard to achieve globally—the right to free, fair elections, unhindered by strongman politicians who seek nothing more than to grow their own power—has become dangerously fragile at home.”

—Former U.S. President Jimmy Carter describes his fear of U.S. democracy becoming increasingly fragile in the year since the Jan. 6, 2021, attacks on the U.S. Capitol.

No wait, you’re going the wrong way. A South Korean snuck across the heavily fortified border into North Korea in a rare defection to the Hermit Kingdom, Reuters reports.

You are commenting as . Change your username | Log out
Tag: United States