The White House prepares a reversal on a key foreign-policy pledge.

Welcome back to Foreign Policy’s SitRep! Want to feel old? U.S. President Joe Biden was inaugurated one year ago today in the confines of a U.S. Capitol still locked down after the Jan. 6, 2021, insurrection. More on that later.

Welcome back to Foreign Policy’s SitRep! Want to feel old? U.S. President Joe Biden was inaugurated one year ago today in the confines of a U.S. Capitol still locked down after the Jan. 6, 2021, insurrection. More on that later.

U.S. President Joe Biden shocked much of the world, his advisors, and most observers in Kyiv, Ukraine, yesterday when he differentiated between a “minor” Russian incursion further into Ukraine versus a wider invasion. But Biden caused more shock, albeit to a smaller group of people, when he announced that the U.S. State Department was considering redesignating the Iran-backed Houthi rebels in Yemen as a terror group.

The decision would be a major reversal for Biden, who made removing the Trump-era designation one of his first major foreign-policy moves last January amid outcry from nongovernmental and rights organizations that the label hampered the flow of aid into the famine-wracked country, where more than 20 million people are in need of humanitarian assistance and some 16 million people are food insecure, according to the World Food Program.

“This would have massive humanitarian consequences,” tweeted Scott Paul, Oxfam America’s policy advocacy director, after Biden’s announcement. “The Biden admin lifted the designation last year—in spite of Houthi attacks—to spare Yemenis from even higher food, fuel, and healthcare prices. Also, it didn’t create any useful leverage. None of this has changed.” Rights groups have called for a renewed cease-fire to allow humanitarian aid to continue flowing into the country.

But the move would come as the Houthis, who have long conducted raids and trafficked weapons through the Persian Gulf, appear to be further beefing up their military prowess.

On Monday, the group used advanced missiles and drones to target the United Arab Emirates, striking Abu Dhabi International Airport and a state-owned oil facility and killing three people. Saudi Arabia responded with airstrikes on the Yemeni capital of Sanaa. The attack has worried officials that the Houthis could be an increasingly dug-in Iranian proxy capable of needling U.S. partners in the region.

One of the most influential U.S. lawmakers on cybersecurity issues, Rhode Island Rep. Jim Langevin, has announced this week that he won’t be running for reelection.

Victor Cha, senior vice president of the Center for Strategic and International Studies, has joined the U.S. Defense Department’s Defense Policy Board.

Ukraine. Russia still appears to be inching toward invading Ukraine despite a flurry of high-level diplomatic talks to defuse the crisis. (Foreign Policy has every corner of the crisis covered.)

The latest: Biden caused an uproar in his press conference by appearing to downplay a “minor incursion” by Russian forces into Ukraine and suggesting the United States and its European allies weren’t aligned on how to respond. The White House later clarified his statement. On Friday, U.S. Secretary of State Antony Blinken is slated to meet Russian Foreign Minister Sergey Lavrov in Geneva—just over a week after their deputies met there.

Report card time. Jan. 20 marks the one-year anniversary of Biden entering office, vowing to restore U.S. credibility around the world and revive U.S. alliances after four years under former U.S. President Donald Trump. So how has he done so far? Foreign Policy asked more than 30 former foreign ministers, heads of state, and other foreign-policy experts to grade Biden’s key foreign-policy priorities: A through F. The report card is in, so take a read.

Sputtered and stalled. Blinken hinted that if a new deal with Iran over its nuclear program isn’t reached within weeks, Washington and its allies may scupper negotiations altogether. “We are indeed at a decisive moment,” Blinken told reporters during a visit to Europe. “But we are not where we need to be. And if we don’t get there very soon, we will have to take a different course.”

The Biden administration’s efforts to revive the Iran nuclear deal that Trump torpedoed have so far failed to yield any breakthroughs. 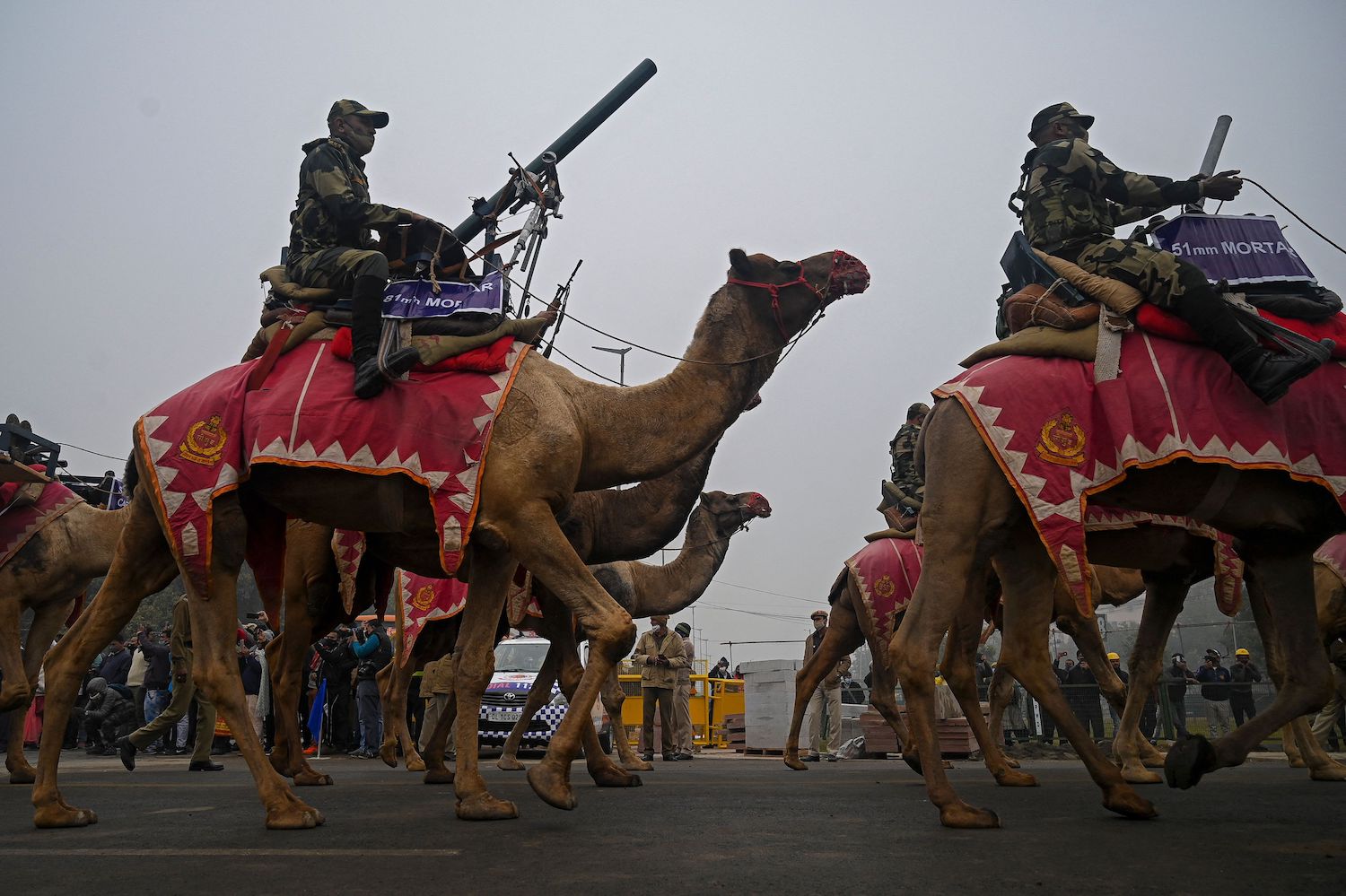 “Instead of ignoring this nonsense … the U.S. accepts Putin’s agenda and runs to organize some meetings. Just like a frightened schoolboy who’s been bullied by an upperclassman.”

The next big breakthrough in drone technology. Drones aren’t just for spying and shooting missiles anymore. Via the Guardian: “Stranded dog saved from rising tide after rescuers attach sausage to drone.”

Exhausted. Tired from a week of shoveling snow? Carter Trozzolo of Toronto sure is. After a day of cleaning out driveways for his family and neighbors, he told a local news affiliate he’d much rather be in school. We feel you, Carter.

You are commenting as . Change your username | Log out
Tags: Terrorism, United States, War