Taipei’s checkbook diplomacy is poised for a showdown with Washington’s anti-corruption agenda.

Of the 14 countries that maintain full diplomatic relations with Taiwan, the majority are in Latin America and the Caribbean. But that cohort is dwindling. In 2017, 12 countries in the region recognized Taiwan; today, that number is down to eight. Just last month, Nicaragua switched its alliance from Taipei to Beijing in a move seen as a stab at Washington after U.S. criticism and sanctions over an election that was not free and fair.

Faced with these changing tides, Taiwan has maintained steady economic backing of its allies in Latin America and the Caribbean, including by providing them with development assistance and donations of masks and medical equipment during the COVID-19 pandemic.

A perk Taipei recently arranged for Guatemala, however, is less conventional. Per an agreement signed by the two countries that was reported this week, Taiwan will pay for a year’s worth of lobbying by a U.S. firm linked to former President Donald Trump that aims to improve Guatemala City’s relations with Washington.

Taiwan’s payment is not illegal, Robert Kelner, an American lawyer who specializes in U.S. foreign lobbying laws, told the Associated Press. But it has raised eyebrows in part because of its irony: The ongoing strain in the Guatemala-U.S. relationship stems from Guatemalan officials’ obstruction of the major U.S. foreign-policy goal of strengthening the country’s anti-corruption efforts.

When Guatemala’s attorney general fired the country’s top anti-graft prosecutor last July, the United States halted its cooperation with the attorney general’s office. The Biden administration then did not invite Guatemala to participate in its December 2021 Summit for Democracy. And just last week, apparent Guatemalan government efforts to target a top anti-corruption judge prompted an official statement of rebuke from the U.S. State Department.

It’s thus not hard to see why the promise of help in dealing with Washington would appear valuable to Guatemala City.

So far, the most visible outcomes of Biden’s anti-graft efforts in Central America have been criticisms from the State Department followed up by targeted sanctions. Weighing the first year of Biden’s Latin America policies, the Washington Office on Latin America wrote on Tuesday that the U.S. president’s anti-corruption drive in Central America still needs “clear benchmarks and follow through, guided by input from civil society and actors in the region.”

But though Biden’s anti-corruption agenda has been largely shunned by the administrations of Guatemalan President Alejandro Giammattei, Bukele, and Honduran President Juan Orlando Hernández, the latter country’s posture may change when Hernández’s successor, Xiomara Castro, is inaugurated on Jan. 27.

Castro campaigned on an anti-corruption platform, which helped her score a historic victory against Hernández’s handpicked successor, Nasry Asfura. After Castro was elected in November 2021, U.S. Assistant Secretary of State Brian Nichols told a congressional panel that “we hope to work with [Castro]” on an agenda that includes anti-corruption. He and U.S. Vice President Kamala Harris will attend Castro’s inauguration.

So, too, will the vice president of Taiwan. Castro pledged during her campaign to switch Honduras’s diplomatic allegiance from Taipei to Beijing, but she fell silent on the promise around Election Day after Washington reportedly pressed her to reconsider.

Between Guatemala and Honduras, Taiwan’s foothold in Central America appears solid for now. The coming months will show if the same can be said for the United States’ hopes for meaningful anti-corruption reform.

Thursday, Jan. 27: Xiomara Castro is inaugurated as president of Honduras.

Russia’s reach. Russia’s recent allusion to the possibility of sending military assets to Latin America in response to tensions with the United States over Ukraine is likely overblown, but a more likely method for Russia to harm U.S. interests in the region should Moscow wish to do so is through its existing disinformation capabilities, the Latin America Risk Report’s James Bosworth writes.

According to the U.S. State Department, Twitter accounts likely linked to Russia egged on mass anti-government protests in Chile in 2019 and were active during Bolivia’s political crisis that same year. “The elections in Colombia and Brazil are a target rich environment for Russia to engage in cyber attacks and disinformation operations,” Bosworth writes. 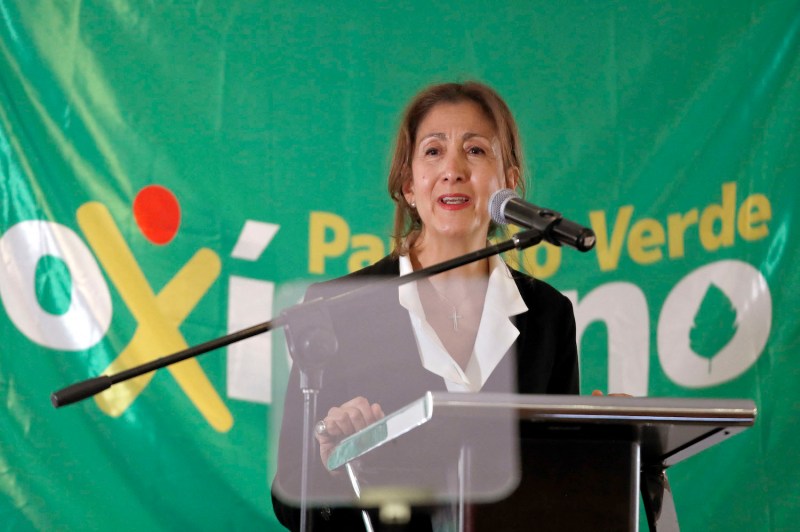 Betancourt’s run. Former Colombian Sen. Íngrid Betancourt announced she is joining Colombia’s crowded presidential race. One of the contest’s few female candidates, Betancourt is well known for spending six years as a hostage of the Revolutionary Armed Forces of Colombia (FARC) after being abducted during her last presidential run in 2002.

Betancourt says she aims to be a candidate of reconciliation. She will compete in an upcoming March primary among several centrist candidates who have thus far failed to excite voters.

See you in LA. The Biden administration has chosen Los Angeles as the host city for June’s Summit of the Americas, a gathering of Western Hemisphere heads of state. The last U.S.-hosted summit, in 1994, took place in Miami. A White House official cited Los Angeles’s “deep and robust ties” in the hemisphere. According to the 2020 U.S. Census, 48.5 percent of the city’s residents identify as Hispanic or Latino.

Argentine innovation. Argentine biochemist Raquel Chan pioneered the use of a sunflower gene in other plants to make them more drought resistant. Bioceres, a company that uses this technology, debuted on the Nasdaq stock exchange last year, and the technology’s use in soy has been approved by regulators in the United States, Argentina, Canada, Brazil, and Paraguay.

In a profile in La Nación, Chan reflected on the state of Argentina’s funding for scientific research, saying that private sector backing was “absolutely” necessary because of the lack of adequate public research institutions. She also suggested that public-private partnerships in Argentina be more navigable and less bureaucratic for researchers.

The Pan American Health Organization, Columbia University, and the University of Chile teamed up to survey the mental health of health care workers across 10 Latin American countries and Puerto Rico during 2020.

In a newly published study, they found that health care workers’ low levels of mental health were associated with self-reported need for economic and emotional support, worry about infecting family members, and conflict with families of contagious patients. Higher levels of mental health were associated with trust in health officials and governments to manage the pandemic, support from co-workers, and self-identification as being religious or spiritual.

The survey questions about depression were based on the Diagnostic and Statistical Manual of Mental Disorders (DSM-IV), which is used in several countries.

This week, Christiane Endler was named the world’s best female goalkeeper of 2021 by FIFA, soccer’s international governing body. The honor is decided through votes by national team coaches and captains, fans, and journalists.

Which country is Endler from? 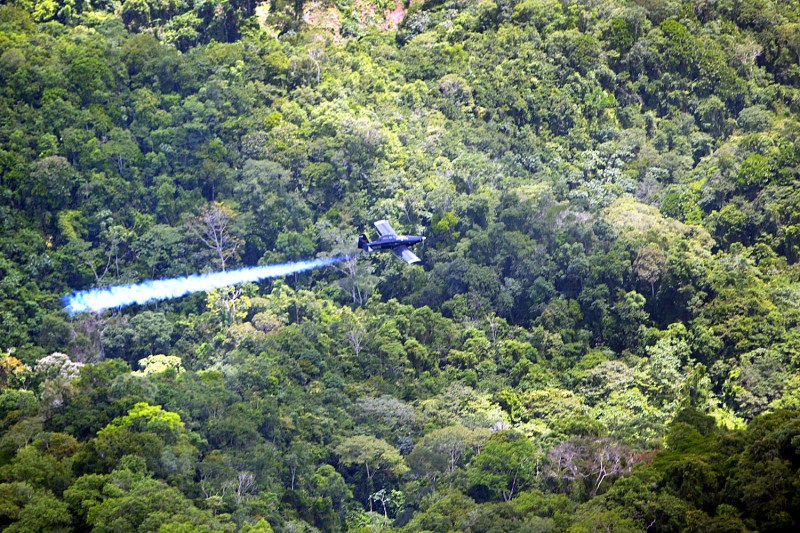 A Colombian police fumigation plane sprays herbicides on coca plants in the suburbs of Medellín, Colombia, on July 23, 2003.JACK GUEZ/AFP via Getty Images

In a ruling that was published Wednesday, Colombia’s Constitutional Court put the brakes on a controversial anti-drug policy backed by both outgoing Colombian President Iván Duque and the United States, reinforcing the right of rural communities to have a say in the implementation of policies that could negatively impact the environment.

From 1994 to 2015, the Colombian government with U.S. backing fought the production of coca—the plant used to make cocaine—in its countryside by spraying pesticides from airplanes. Colombian drug officials paused the program in 2015 over environmental concerns, but Duque tried to restart it in 2019 after pressure from the Trump administration.

The relaunch soon became tied up in Colombia’s courts. The Constitutional Court ruled that the consultation of local communities in preparation for renewed spraying had been inadequate, and it mandated an entirely new consultation process be carried out before any spraying could move forward.

What’s more, the ruling said the government must take into account the results of future consultations in awarding any future permissions for aerial fumigation. The now-annulled consultations had been carried out over the internet despite the fact that affected communities had low levels of internet access.

Rural Colombian communities have long complained that, in addition to causing health consequences, the spraying of pesticides hurts their ability to cultivate crops other than coca. They’ve called for economic alternatives to coca cultivation rather than spraying, including programs to help farm other crops, raise animals, or run tourism operations.

The ruling thus has important implications not only for drug policy in Colombia but also for environmental and Indigenous rights. Many other consultations in the region related to government projects occur simply as rubber-stamp processes rather than being democratic or binding.

And while the language in the new decision—that consultations must be conducted in “good faith,” that local communities must have legal representation, and that consultation “should have effects on the decision that is adopted”—still leaves some ambiguity, it represents a clear step beyond Colombia’s previous status quo.

NEW FOR SUBSCRIBERS: Want to read more on this topic or region? Click + to receive email alerts when new stories are published on U.S. Foreign Policy

The Cryptocurrency Crash Is Replaying 2008 as Absurdly as Possible

Killer Robots Are Here—and We Need to Regulate Them