NATO Responds to Russia’s Demands With Its Own

Russia sent its demands to the West, and now the West is sending counter offers.

U.S. officials and NATO separately sent a list of proposals to Moscow to defuse the current crisis and convince Russia to back off its war footing after it amassed 100,000 troops on Ukraine’s borders.

What’s on the diplomatic menu. Among NATO’s proposals, outlined in a speech on Wednesday by NATO Secretary-General Jens Stoltenberg: reopening NATO’s and Russia’s respective diplomatic missions, starting new talks on arms control and rules for intermediate and short-range missiles, and proposing new rules for transparency on military exercises and nuclear doctrines.

Stoltenberg also demanded Russia remove its troops from Ukraine, Georgia, and Moldova—a likely nonstarter for Russia, given its penchant for fomenting frozen conflicts and propping up artificial breakaway provinces in those countries to wield its geopolitical influence over its neighbors.

Some hope for diplomacy? But there may be room for common ground on the other proposals, current and former U.S. and NATO officials told SitRep.

The hope is these proposals can be a starting point for gradually defusing tensions over Ukraine, though Washington and the rest of its NATO allies have resoundingly rejected Moscow’s demand to permanently close the door on NATO expansion to new members, namely Ukraine.

Still, NATO members are bracing for another war in Europe if Russian forces cross the border with Ukraine. Washington and NATO allies—most notably Britain, Canada, and the Baltic states—have ramped up shipments of defensive military equipment to Ukraine. The United States has also put 8,500 troops on standby to deploy to Eastern Europe on short notice to shore up NATO’s eastern flank (though there are no plans to send U.S. troops to Ukraine).

Biden has announced John Godfrey, the State Department’s acting counterterrorism envoy, to be the next U.S. ambassador to Sudan. (We first reported that Godfrey was the likely pick back in July.)

Career diplomat Michael Adler has been selected to be U.S. ambassador to South Sudan.

Barely hanging on. Afghanistan is “hanging by a thread,” United Nations Secretary-General António Guterres told the U.N. Security Council on Wednesday, as he pushed for countries to allow lifesaving transactions with the Taliban-ruled nation that is fast becoming the world’s largest humanitarian crisis. Guterres is calling for more legal assurances for financial institutions and commercial partners to safely work with humanitarian groups without breaching sanctions. Nearly $10 billion in Afghan central bank reserves have been frozen overseas since the Taliban took power last August.

Knock-down, drag-out. Ukraine is trying to speed up training of legions of new civilian defense militias to cover the Ukrainian military’s back if Russia launches a renewed invasion of the country, as the Biden administration expects. Jack reports that Ukrainian Defense Minister Oleksii Reznikov has given the go-ahead to a plan to train 130,000 new defenders within a matter of weeks. “The best way to protect Ukraine from further military escalation on the part of the Russian Federation is to set conditions under which the aggressor will suffer unacceptable losses and will not be able to attain its goal,” Reznikov said in a nine-page memo seen by Foreign Policy.

Missile launch. North Korea conducted another missile launch on Thursday, South Korea’s military said in an alert, the sixth round of tests conducted by Pyongyang in this month alone. South Korea said the projectiles are believed to be two short-range ballistic missiles from near the coastal city of Hamhung, North Korea’s second-largest city, on Thursday morning. Experts see the move as North Korea’s effort to gain leverage at the negotiating table if it begins renewed nuclear talks with the Biden administration. The move also comes as North Korea has begun reopening its borders after a harsh two-year coronavirus lockdown. 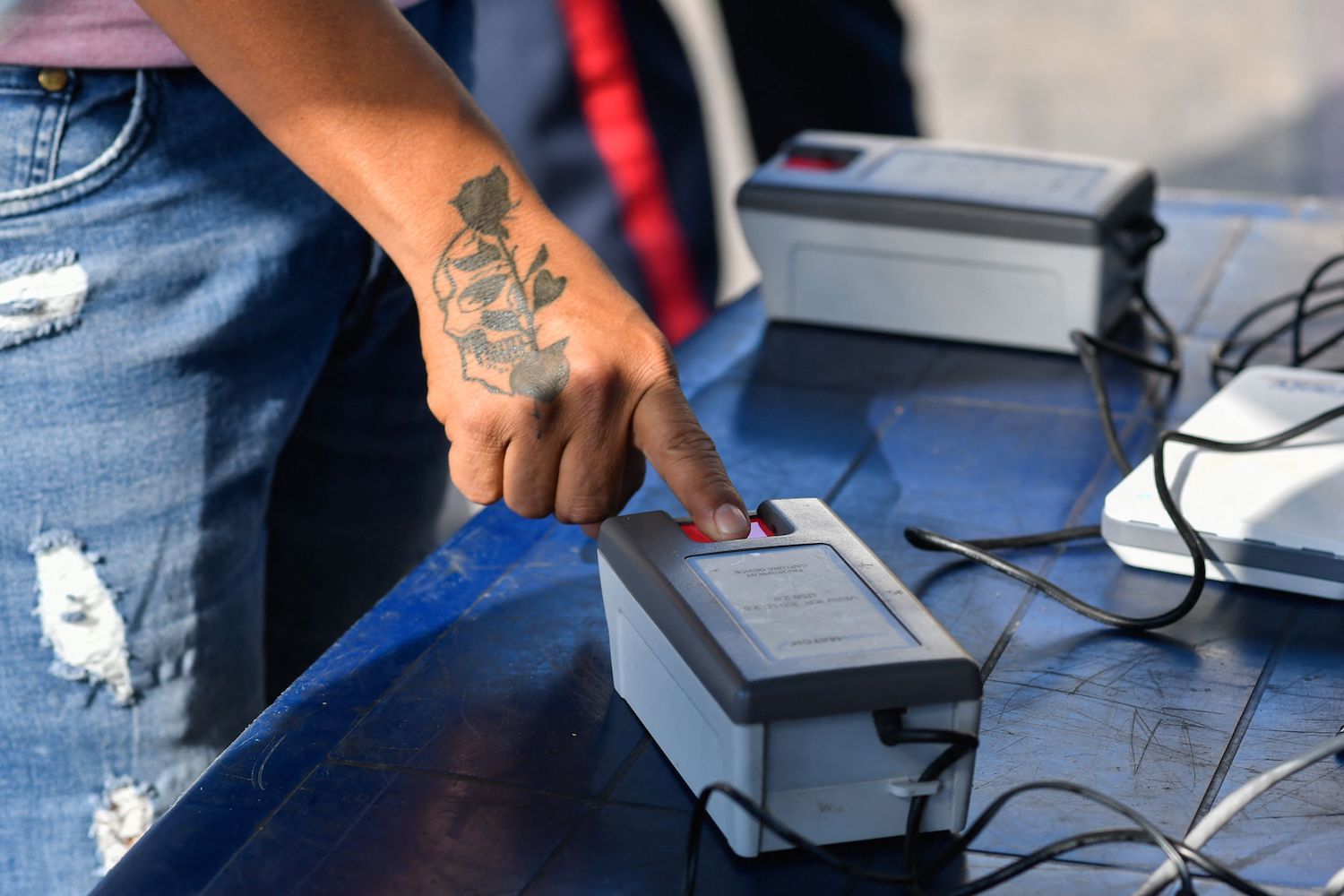 ​​A man puts his finger on a fingerprint scanner to sign a petition in favor of holding a referendum to remove Venezuelan President Nicolás Maduro, at a signature collection point in Caracas on Jan. 26. Collection points to activate a recall referendum against Maduro were mostly empty Wednesday after the opposition called against participation in the campaign, arguing limits imposed on the campaign render a recall impossible. Federico Parra/AFP via Getty Images

“What kind of support will Germany send next? Pillows?”

—Kyiv Mayor Vitali Klitschko after learning of Germany’s announcement it will send 5,000 military helmets to the Ukrainian armed forces to help defend against a potential Russian invasion

Tweet of the year. Earlier this week, Delta Air Lines began asking passengers on Twitter: What was one city that changed their lives? Well, the public had a resounding answer for them (and probably not the one the airline company was hoping for): Wuhan, China. In a year of omicron variant surges, this will be a tweet to remember.

You are commenting as . Change your username | Log out
Tags: Europe, Russia, Ukraine, War