A stream of tributes have followed the death of beloved Indian singer Lata Mangeshkar last weekend at the age of 92. She produced thousands of songs in more than a dozen languages in a career that spanned eight decades, much of it spent in the Indian film industry as a playback singer. Mangeshkar recorded songs lip-synced by Bollywood’s biggest stars. Her voice and longevity made her one of India’s greatest cultural icons.

Mangeshkar’s fame and appeal also extended across much of South Asia. Her music united a region that has few shared heroes and often struggles to come together around common causes. Even with all the respect and fame she commanded in India, Mangeshkar could be divisive in her home country because of her personality and politics—making her status as a regional icon even more impressive.

Tributes this week showed that Mangeshkar may have been more beloved in Pakistan than anywhere else beyond India. Officials, artists, and athletes all paid homage to her after her death, and Pakistani Prime Minister Imran Khan said the subcontinent “has lost one of the truly great singers the world has known.” Salman Ahmad, a member of one of Pakistan’s most famous rock bands, sang a tribute to her on an Indian TV station.

Mangeshkar also had unlikely admirers in Pakistan. Muhammad Zia-ul-Haq, the dictator who Islamicized Pakistani society in the 1980s, including curbing the activities of female entertainers, famously said in an interview: “I myself am fond of Lata Mangeshkar but if you want to send her to Pakistan to sing, I’ll say not now because it is not compatible with the current Pakistani spirit.”

The governments of Nepal, Sri Lanka, and Bangladesh, where Mangeshkar was praised for supporting the 1971 independence movement, also offered tributes to the late singer this week. Former Afghan President Hamid Karzai, who lived in India for many years, delivered effusive praise. “With her voice #LataMangeshkar filled millions of hearts with joy,” he tweeted.

It’s not easy to be a regional icon in South Asia. Some cricket legends, such as India’s Sachin Tendulkar, become household names, but sports fans tend to prefer their own countries’ athletes. Literary titans with regional appeal, such as the 20th-century writer Saadat Hasan Manto, are less known among younger generations. Then there are those figures—think Pakistani girls’ education activist Malala Yousafzai—who enjoy regional popularity but remain controversial in their own countries, often not through any fault of their own.

Mangeshkar’s regional appeal can be attributed to her talent as well as her close association with Bollywood, which has long been wildly popular across South Asia. At the same time, Mangeshkar was herself a regionalist. She sang in languages heard not only in India, but also elsewhere in the region—including Bengali, Tamil, Punjabi, and Urdu. She also provided songs for movies in Nepal—an example of her desire to branch out beyond Bollywood.

However, Mangeshkar had detractors back in India, where she faced accusations of refusing to help talented younger colleagues. (Some fans push back against such claims.) Although her backers insist she rose above India’s fractious politics and enjoyed friendships with leaders from all parties, she also had a strong bond with Indian Prime Minister Narendra Modi and backed the Rashtriya Swayamsevak Sangh, the hard-line nationalist group linked to the ruling Bharatiya Janata Party (BJP).

India’s political polarization means that even public figures seeking to transcend partisanship often get dragged into it. Film critic Namrata Joshi wrote in her obituary of Mangeshkar that the “need (or not) to separate the art from the artist comes up for debate yet again.” But Mangeshkar’s artistry remains sacrosanct, in both India and the broader region that embraces her.

Voting begins in Uttar Pradesh. On Thursday, voting began in the Indian state of Uttar Pradesh in an election that runs through March 7. Uttar Pradesh is India’s most populous state, making it the biggest electoral prize; it is currently controlled by the BJP. The opposition hopes to capitalize on concerns about unemployment and the BJP’s poor handling of the COVID-19 pandemic. Recent polling suggests the BJP will hold on, albeit with fewer legislative seats.

A key election storyline centers around Uttar Pradesh Chief Minister Yogi Adityanath, a hard-liner who engages in hate speech and has never been prosecuted for it. Many close observers of Indian politics see Adityanath as a potential successor to Modi, who also served as a chief minister before ascending to national office. But for Modi and the BJP to see Adityanath as prime minister material, he will need to prove his political chops and win a second term.

The Quad meets in Australia. Foreign ministers from the countries of the Quadrilateral Security Dialogue—Australia, India, Japan, and the United States—meet in Melbourne, Australia, on Thursday and Friday. The Quad has gained momentum in recent years as all four countries have seen their relations with China deteriorate. This week’s meeting is likely to focus on advancing the biggest Quad project so far: a COVID-19 vaccine plan that aims to counter China’s vaccine distribution efforts across the Indo-Pacific region.

Although the Quad countries tout their shared interests, this week’s session unfolds against the backdrop of several world crises on which they don’t see eye to eye, including Russia’s military buildup on the border with Ukraine—which India has refused to condemn. China remains the main geopolitical focus, though: Its state media has described the summit as a case of “tightening alliances to serve military confrontation.”

Journalist in Kashmir jailed on sedition charges. Fahad Shah, editor of the Kashmir Walla and a contributor to Foreign Policy, was detained on Feb. 4 on sedition charges in the town of Pulwama in Indian-administered Kashmir. The charges could carry a life sentence. Shah’s lawyer filed a bail application on Feb. 5, but he remains behind bars. According to a statement from the Kashmir Walla editorial board, Shah was arrested as part of an investigation into the outlet’s coverage of a gunfight in Pulwama more than two years ago.

In their own statement, police said Shah has published content that glorifies terrorists and generates “ill will” and “disaffection” against India. The arrest seems to be another nail in the coffin for press freedom in Kashmir, where the Kashmir Walla is one of the only remaining independent media outlets. Since New Delhi revoked the region’s autonomy in August 2019, journalists have complained of increased harassment.

A new media policy announced in 2020 allows the authorities to prosecute journalists in Kashmir for publishing alleged misinformation. 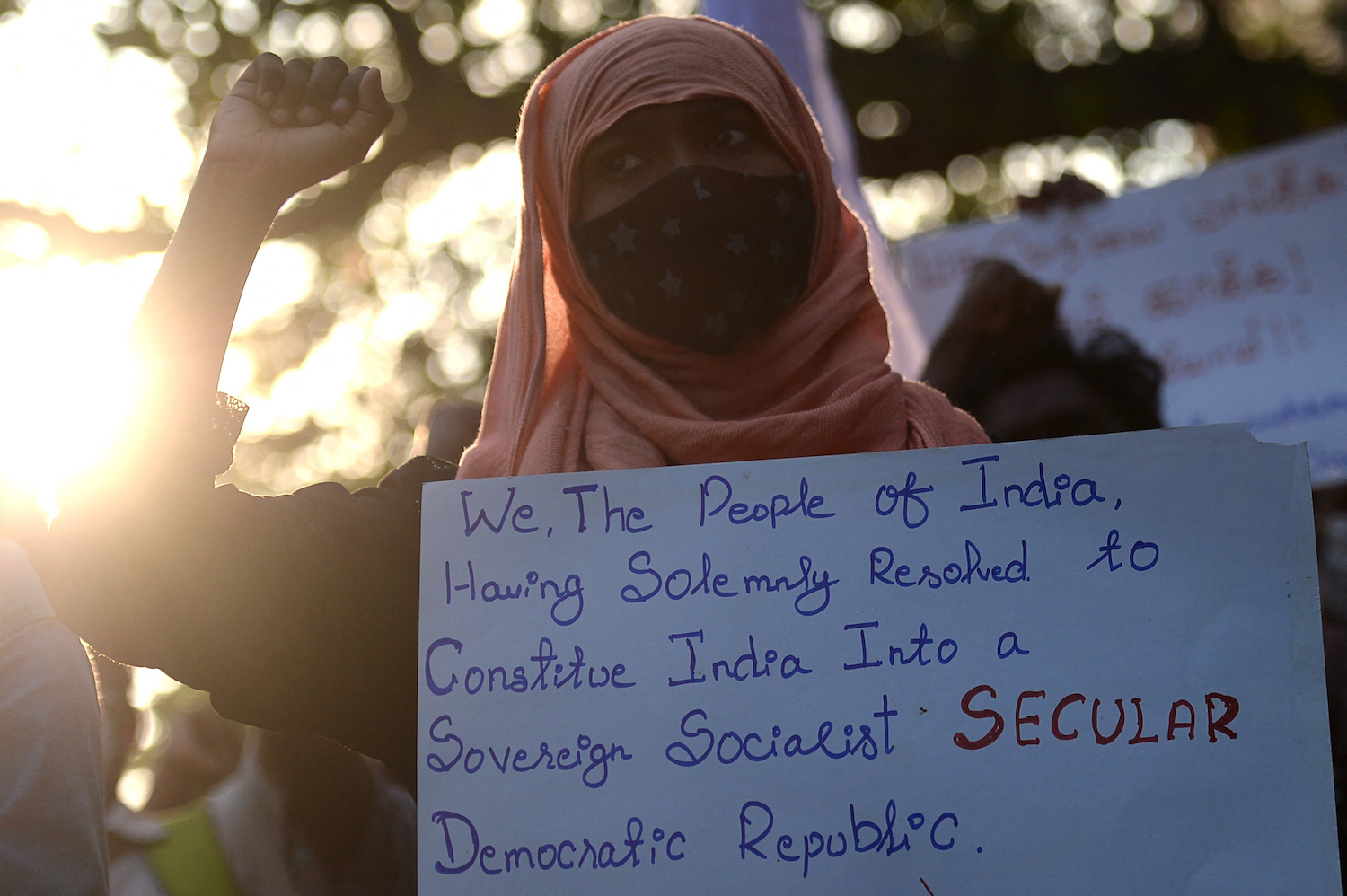 An activist from the Students Federation of India holds a placard during a demonstration against the recent hijab ban in some educational institutions in Chennai, India, on Feb. 10.ARUN SANKAR/AFP via Getty Images

Tensions grow over hijab ban in southern India. On Tuesday, an Indian student wearing a burqa was heckled by a group of hard-liners shouting Hindu slogans as she walked in to her college in the state of Karnataka. The incident, which came several weeks after another college in the state imposed a ban on hijabs, has attracted global attention.

Karnataka is controlled by the BJP, and for critics of the Modi government, the hijab ban marks the latest example of discrimination against Muslims. Government supporters counter that the college was simply trying to enforce rules on school uniforms.

“What right do they have to tell me to get rid of my burqa?”

—Indian student Muskan Khan, speaking to reporters after being heckled by a right-wing Hindu mob as she walked into her college wearing the religious covering.

Earlier this month, local police desecrated 45 graves in an Ahmadi cemetery in Hafizabad, Pakistan. This isn’t the first time law enforcement has been complicit in such acts, an Ahmadi activist told me this week. A statement from Pakistan’s independent Human Rights Commission said police were responding to “complaints from a local resident who objected to the [Ahmadi] community’s use of holy verses on its tombstones.”

Ahmadis are a small religious minority who experience rampant discrimination in Pakistan: They struggle to find employment and are targeted with violence by Islamist extremists. As the Human Rights Commission statement put it, the attack left “members of the Ahmadiyya community as beleaguered in death as they are in life.”

Although many observers have focused attention on the worsening plight of religious minorities in India, the most vulnerable religious communities suffer in Pakistan, too. Ahmadis report that crimes against them have risen and that the number of blasphemy cases filed against them—a tactic used by Islamist hard-liners—has increased since 2020.

What also stands out about attacks on Ahmadis is the Pakistani government’s silence. Officials frequently condemn assaults on other minorities, including the lynching of a Sri Lankan factory manager last year. Many Pakistanis say their government is quick to call out such violence. But Islamabad’s reaction to the grave desecrations in Hafizabad has been radio silence.

Journalist Arifa Noor writes in Dawn about speculation over what Pakistan’s opposition may or may not be doing behind the scenes to weaken Prime Minister Imran Khan. “At times, it seems the reason for the relevance” of the opposition “is to provide hot air to news shows, preventing the latter from discussing serious issues such as inflation,” she argues.

In the Dhaka Tribune, academic Md Kawsar Uddin warns that Bangladesh’s failure to strengthen governance, human rights, and democracy could cause it to squander the economic gains of recent decades. “The practice of good governance, the rule of law, and democracy are pivotal to the sustainable development of any society,” he writes.

Writing in South Asian Voices, analyst Kashoon Leeza assesses Pakistan’s first-ever official national security policy document. She writes that it is “the first step in the right direction” and is “significant in outlining [a] much-needed geoeconomics vision, [but] the guidelines to implement it do not seem to be fully comprehended.”

You are commenting as . Change your username | Log out
Tags: Culture, South Asia