Diplomats didn’t get serious about the U.S. evacuation until days before it began.

Welcome back to Foreign Policy’s SitRep! Before we start, an important message to anyone about to be sanctioned by Western governments for fomenting war in Europe: Remember to sail your luxury superyachts back home so they can’t be impounded by said sanctions. Thanks for setting the example, Vladimir.

Alright, here’s what’s on tap for the day: New details about the Biden team’s disorderly withdrawal from Afghanistan, a shake-up at the National Security Council, and we have the scoop that the United States is (finally) dropping a new Indo-Pacific strategy.

Welcome back to Foreign Policy’s SitRep! Before we start, an important message to anyone about to be sanctioned by Western governments for fomenting war in Europe: Remember to sail your luxury superyachts back home so they can’t be impounded by said sanctions. Thanks for setting the example, Vladimir.

Alright, here’s what’s on tap for the day: New details about the Biden team’s disorderly withdrawal from Afghanistan, a shake-up at the National Security Council, and we have the scoop that the United States is (finally) dropping a new Indo-Pacific strategy.

Even during the worst days of the United States’ evacuation from Afghanistan, with images of Afghans falling from the wings of U.S. military transport planes and crowds at Hamid Karzai International Airport piling up on social media, the Biden administration stuck to the script. The administration staunchly defended the evacuation of 125,000 people, with U.S. President Joe Biden calling the effort historic and shunting aside naysayers who said the White House should have ramped up evacuations sooner.

But that narrative faced scrutiny on Capitol Hill in the weeks after U.S. troops left in August 2021, as lawmakers scrambled to get hundreds of stranded U.S. citizens and thousands of legal permanent residents out of the country. Now, it’s on the verge of falling apart after an internal U.S. Army report uncovered by the Washington Post revealed—from the perspective of the troops whose boots were on the ground—just how messy the two-week evacuation actually was.

For months, officials said, the U.S. Embassy in Kabul stonewalled military commanders about planning for an evacuation, with acting U.S. Afghanistan envoy Ross Wilson reluctant to surrender influence on the ground. Even as Marines landed at the airport in late July 2021 to assist with planning, it was not until Aug. 11, 2021, just five days before the Taliban took over Kabul and then-Afghan President Ashraf Ghani fled the country, that diplomats on the ground got serious about getting out.

“We had ad hoc meetings with the embassy, but they didn’t want to talk about the [evacuation],” a military officer whose name was redacted told Army investigators. “They really didn’t want to talk about it. … It was a stonewall for not really being able to plan. We essentially planned the [evacuation] with [the U.S. State Department] and partner input in about five days.”

Even though top military officials—such as retired Gen. Austin “Scott” Miller, then the top U.S. commander in Afghanistan—were expressing concerns about the Taliban’s lightning march through the country as early as May 2021, the embassy did little to scale down its facility, then the largest embassy in the world with 4,000 employees. “Trying to get the embassy to discuss the [evacuation] was like pulling teeth until early August,” added Marine Corps Brig. Gen. Farrell J. Sullivan, who commanded Marines on the ground in Kabul.

In the interim, military commanders on the ground—who were already losing visibility throughout the country as the United States reduced its force to just 650 troops in the days before leaving—could only collaborate with the British on evacuation planning. Another military commander said Wilson, the top U.S. diplomat in Afghanistan, went on vacation for two weeks in the United States after accompanying Ghani to his White House meeting with Biden in June, bringing planning to a grinding halt.

“There were as many as 10 districts falling every day, getting closer and closer to Kabul,” a military officer whose name was redacted told investigators. “The embassy needed to position for withdrawal, and the ambassador didn’t get it.”

Once the evacuation began, the U.S. State Department’s prioritization for who to evacuate was fuzzy and continued to change over the two-week drawdown, military officials told investigators. “Then special interest groups overwhelmed the process,” Rear Adm. Peter Vasely, who served as the top U.S. commander for the forward-based U.S. mission in the final days, told investigators.

And the troops manning the gates were overwhelmed by requests from the administration to get VIPs into the airport. Sullivan, the Marine commander on the ground, “was receiving calls from the White House, and a lot of the requests were not [American citizens],” he said. The Washington Post reported on Thursday that requests from Pope Francis and First Lady Jill Biden were among those taxing the bandwidth of military commanders on the ground.

Worse yet, there was no plan to coordinate with the Afghan army to defend the airfield. The assumption was that the Taliban would stop outside of Kabul, and Wilson, the U.S. envoy, made a “conscious decision” not to let Afghan forces or the government know that the United States was planning for an evacuation. Biden’s decision to move the deadline for withdrawals from mid-September to the end of August also caught troops off guard, who thought they had more time to plan.

And, unfortunately for the White House, it’s a story that’s getting played out in email chains among congressional staffers overseeing probes into the final chapter of the U.S. war in Afghanistan, with a potential Republican takeover of the House of Representatives (if not also the Senate) looming in November.

The Senate is also keeping Afghanistan at the top of its agenda. On Wednesday, Sens. Chris Murphy and Todd Young convened a hearing on the future of U.S. engagement in Afghanistan and the massive humanitarian crisis wracking the country since the chaotic U.S. withdrawal. The hearing reflected the fierce debates within the U.S. government about how to offer lifelines to the Afghan people without solidifying the Taliban’s power.

“There is no good choice here,” Murphy said during the hearing. “On one hand, we cannot unduly empower the Taliban. We have to recognize the moral hazard. But on the other hand, with families that we stood with for two decades facing destitution and starvation, the solution cannot be to stand by and do nothing.”

On Wednesday, the Senate confirmed Scott Nathan to be CEO of the U.S. Development Finance Corporation.

The Senate also confirmed Sasha Baker to be deputy undersecretary of defense for policy by a vote of 75 to 21. Baker, a former national security advisor to Democratic Sen. Elizabeth Warren, currently serves on Biden’s National Security Council (NSC).

Other NSC departures. Shanthi Kalathil, one of the most senior officials in Biden’s NSC who oversees the global democracy and human rights portfolio, is leaving her post at the end of the month, as we scooped this week. No word on her replacement. (And Biden’s pick to be her counterpart at the State Department, Sarah Margon, is still languishing in confirmation limbo as the Senate stalls on her nomination.)

This follows another high-profile NSC departure: Beth Cameron, the National Security Council senior director for global health security and biodefense, is leaving her post this month too. She’ll be replaced by Raj Panjabi, the U.S. Agency for International Development coordinator on malaria.

At the State Department, veteran career diplomat Matt Murray was appointed top U.S. official for the Asia-Pacific Economic Cooperation (APEC), just as the United States announced it would host a major APEC forum in 2023.

Finnish diplomat Heli Hautala and academic Maria Snegovaya have joined the Center for a New American Security as fellows in its trans-Atlantic security practice.

First in SitRep: New IndoPacom strategy. The White House is preparing to release its new Indo-Pacific strategy on Friday, current and former officials told SitRep. The long-awaited strategy will be the guiding document for how the Biden administration charts its competition with geopolitical rival China. Expect to see a lot of language about cooperation with allies and partners (particularly the Quadrilateral Security Dialogue). Most notably, it will be released publicly—a stark change from when the Trump administration made its 2018 Indo-Pacific strategy classified. (It was later declassified in the final days of Trump’s administration.)

The move comes as U.S. Secretary of State Antony Blinken is on the road in Australia, where he’s trying to reassure nervous allies that the United States is still moving ahead with its Asia pivot despite the Ukraine crisis sucking up most of the oxygen in Washington.

Stay as long as you want. Under longtime Belarusian strongman Aleksandr Lukashenko, Belarus has always been in Russia’s orbit, but it has also balked at having Russian troops permanently stationed within its borders. That’s all changing now, after Lukashenko cozied up to Putin amid a wave of pro-democracy protests and the current Russian-fueled crisis on Ukraine’s borders.

Top NATO officials are warning that the 30,000 Russian troops and advanced missile systems being deployed to Belarus (purportedly for 10 days of military exercises) could end up staying, as FP reported this week—a big deal and very unwelcome development for NATO military planners. “The military buildup in Belarus seems to be something more permanent, unfortunately, and it’s a great concern of ours,” Polish Foreign Minister Zbigniew Rau told Robbie. 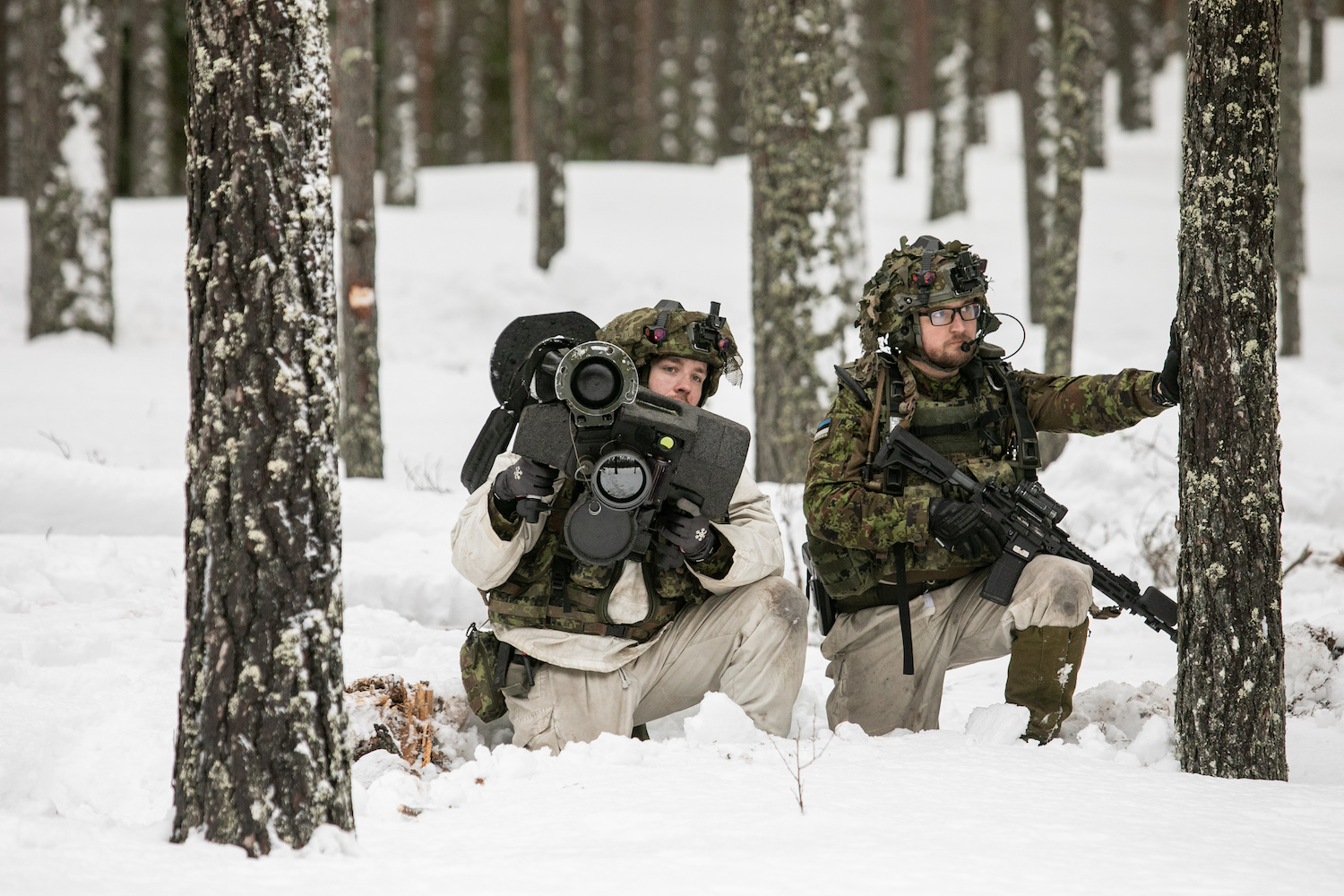 Feb. 17 to Feb. 18: The European Union and Africa Union host a joint summit in Ivory Coast.

Commitment to the job. If only all of us could commit to our jobs with the level of fervor and devotion as this Chinese soldier who got the Olympic flag stuck over his face.

NEW FOR SUBSCRIBERS: Want to read more on this topic or region? Click + to receive email alerts when new stories are published on United States, North America