Is This the West’s Last Diplomatic Stand to Avert a Russia-Ukraine War?

Welcome back to Foreign Policy’s SitRep! Before we start, we wanted to let you know about a virtual Q&A we’re doing next Thursday, Feb. 24, from 2 to 3 p.m. EST.

Got questions on the Russia-Ukraine crisis? What about Team Biden’s China policy? We’ll be joined by fellow ace reporter Amy Mackinnon answering any big foreign policy-related questions on your mind. Event details here.

Alright, here’s what’s on tap for the day: Another round of diplomacy to try to defuse the Russia-Ukraine crisis, inside a defense contractor’s boardroom coup, Israel beefs up anti-missile defense with lasers, and the United States ensnares a spy for Russia.

Welcome back to Foreign Policy’s SitRep! Before we start, we wanted to let you know about a virtual Q&A we’re doing next Thursday, Feb. 24, from 2 to 3 p.m. EST.

Got questions on the Russia-Ukraine crisis? What about Team Biden’s China policy? We’ll be joined by fellow ace reporter Amy Mackinnon answering any big foreign policy-related questions on your mind. Event details here.

Alright, here’s what’s on tap for the day: Another round of diplomacy to try to defuse the Russia-Ukraine crisis, inside a defense contractor’s boardroom coup, Israel beefs up anti-missile defense with lasers, and the United States ensnares a spy for Russia.

A Last-Ditch Effort to Avert War

The Biden administration and European allies appear to be making a final diplomatic stand to avert a renewed Russian invasion of Ukraine, with Moscow continuing to build up troops and equipment along the border.

The multipronged approach—led by U.S. Secretary of State Antony Blinken, who gave a major address to the United Nations on Thursday—is shrouded in pessimism, coming as U.S. President Joe Biden himself has warned that he still considers a Russian invasion likely.

Moscow stoked tensions with Washington in recent weeks when it expelled the second-highest-ranking diplomat at the U.S. Embassy, Bart Gorman, a move that a State Department spokesperson portrayed as an “unprovoked” and “escalatory step.” And on the military front, Russian aircraft buzzed three U.S. P-8A Poseidon aircraft flying over the Mediterranean Sea in separate incidents over the weekend.

Russia, meanwhile, claims to have taken de-escalatory steps in the past 48 hours, including public statements that it would send some units in its Western Military District and Crimea, which it annexed during the 2014 incursion, back home.

But Western officials say it’s all talk and no action. “Despite Moscow’s claims, we have seen no sign of withdrawal or de-escalation so far,” NATO Secretary-General Jens Stoltenberg said after a meeting with NATO defense ministers on Thursday. “On the contrary, Russia’s buildup appears to continue.” Despite that, Biden said he has no plans to speak to Putin. (The two leaders spoke over the weekend.)

“We see them add to the more than 150,000 troops that they already have arrayed,” U.S. Defense Secretary Lloyd Austin said after the NATO meeting in Brussels on Thursday. Despite claiming that some units are heading home, Russia has upped its readiness for combat in the Black Sea, sent troops and aircraft forward, and stocked blood banks at forward positions, something that U.S. and European officials have long seen as a possible precursor to invasion.

While the Biden administration is being tight-lipped about providing evidence to back up its claims about the Russian invasion plans, the United States isn’t the only eye in the sky.

Satellite images taken by the commercial imaging company Maxar Technologies on Tuesday and Wednesday showed Russia putting in place attack helicopters in Belarus and building and taking apart a military pontoon bridge across the Pripyat River, just miles from the Ukrainian border and the Chernobyl Exclusion Zone, where Ukrainian troops recently held exercises. Other troops appeared to be picking up and moving west, closer to the front lines, and the photos also indicated Russia was building a field hospital in Osipovichi, Belarus.

And Western officials are still convinced that Putin is trying to drum up a context for war. While Austin demurred on whether Russia was responsible for the shelling of a kindergarten in eastern Ukraine on Thursday, he said it fit a pattern of Moscow using military activity to justify a conflict.

And British Foreign Secretary Liz Truss had stronger words. “Reports of alleged abnormal military activity by Ukraine in Donbas are a blatant attempt by the Russian government to fabricate pretexts for invasion,” she tweeted from Kyiv, just minutes after stepping off the plane to meet with top Ukrainian officials. “This is straight out of the Kremlin playbook.” (Ukraine said 32 shells landed in Donetsk and Luhansk, hitting a kindergarten and high school, injuring three.)

Meanwhile, Western officials are bracing for a potential humanitarian and refugee crisis if the worst comes to pass. “We’re predicting a longer-term insurgency, so this refugee flow is going to be incredibly acute at the start, but it will likely continue apace for months and years,” Democratic Sen. Chris Murphy told NBC News on Wednesday. “The trans-Atlantic alliance is going to have to have a long-term plan for handling Ukrainian refugees.”

Biden is finally getting his top Russia hand at the Pentagon in the waning hours before an expected Russian invasion of Ukraine. Celeste Wallander was confirmed to be the Defense Department’s assistant secretary for international security affairs on Wednesday in an 83-13 vote, overruling objections from Trump-allied Sen. Josh Hawley, who blocked the Democrats’ bid to fast-track the vote.

Rachel Ellehuus, formerly a scholar at the Center for Strategic and International Studies, has joined the U.S. mission to NATO as a senior advisor to the NATO ambassador and the defense secretary’s Europe representative.

Spy games. The U.S. Justice Department notched a counterespionage win this week when it announced the guilty plea of a man who spied for Russia. It’s an unusual case: Hector Alejandro Cabrera Fuentes, a Mexican national living in Singapore, agreed to snoop on Americans in Miami on behalf of a Russian government official. Fuentes faces up to 10 years in prison.

The Justice Department press release is vague and leaves more questions than answers—perhaps unsurprisingly given the sensitive nature of counterintelligence. But it offers a small insight into how U.S. law enforcement is ramping up counterespionage cases against suspected Russian and Chinese spies.

Now there’s a massive legal battle brewing among the board members of Aerojet Rocketdyne—the United States’ sole independent solid rocket motor producer that supplies key parts for missiles and other high-end weapons. Breaking Defense has the inside scoop on the fight between Aerojet’s CEO, executive chairman, and other board members, complete with lawsuits and countersuits.

Build a wall…with lasers. Israel has advanced plans to boost its “Iron Dome” defense against missile and rocket attacks with lasers, as Defense News reports. Israeli defense tech wonks have been working on anti-missile laser technology for decades but in recent years announced technological breakthroughs to make the system viable. Israeli leaders said the system would be operational next year, but some experts still question the cost and effectiveness of such a system. 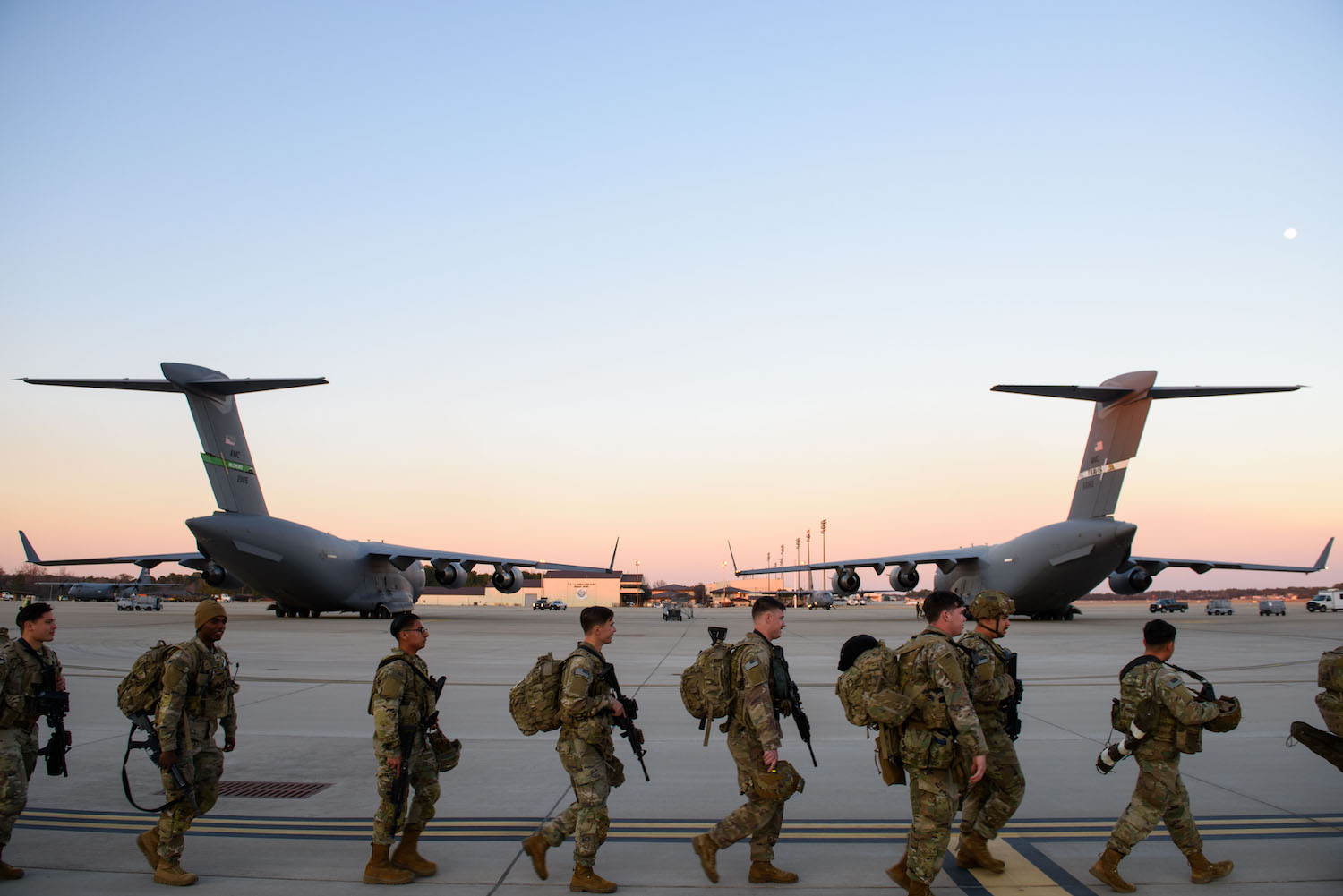 Biden laid out a grim picture of the Russian military buildup near Ukraine when he spoke to reporters on the White House’s South Lawn on Thursday morning.

Reporter: Do you think [Putin’s] going to go through with this, sir? Is your sense that this is going to happen now?

Biden: My sense is this will happen within the next several days.

Reporter: Is there any diplomatic path still available, Mr. President?

Biden: Yes, there is. There’s a clear diplomatic path. That’s why I asked Senator—Senator—(laughs)—Secretary Blinken to go to the United Nations and make his statement today. He’ll lay out what that path is. I’ve laid out a path to Putin as well on, I think, Sunday. And so, there is a path. There is a way through this but by diplomacy.

Feb. 18: Former U.S. Secretary of State Mike Pompeo speaks at a Center for the National Interest event on U.S. nuclear strategy and deterrence.

Feb. 23: The U.N. General Assembly is scheduled to hold a debate on Ukraine.

—Estonian Prime Minister Kaja Kallas, when asked by CNN if the West is too prone to see Putin as “12 feet tall.”

“He was phoning in.” We’re not big cricket watchers here at SitRep, but here’s something we can get behind: cricketers using their shoes and bats to make mock phone calls after a big play.

You are commenting as . Change your username | Log out
Tags: Military, Russia, U.S. Military, Ukraine, War

NEW FOR SUBSCRIBERS: Want to read more on this topic or region? Click + to receive email alerts when new stories are published on Military, Russia