Divided by Politics, Bound by Love: A Ukrainian Family Waits for War

As Russian shelling and provocations intensified over the weekend, one Ukrainian family awaits the worst.

AVDIIVKA, Ukraine—As cognac is poured and Russian guns approach, the Holovatenko family cram into their kitchen and shrug off a looming war.

Artillery strikes have once again erupted around the eastern Ukrainian town of Avdiivka and the entire front line. Yet inside their second-floor apartment, explosions are drowned out by lively debate and affectionate teasing between relatives divided by politics, bound by love, and increasingly worried by what awaits their homeland.

“Ukraine needs to join NATO,” said 43-year-old Vitaliy, a former cop, as he tucks into a steaming plate of carbonara. “[Russian President Vladimir] Putin won’t bother us then.” His sister-in-law isn’t convinced, and the conversation shifts to Ukraine’s rulers, including former pro-Russian Ukrainian President Viktor Yanukovych, who was ousted eight years ago. 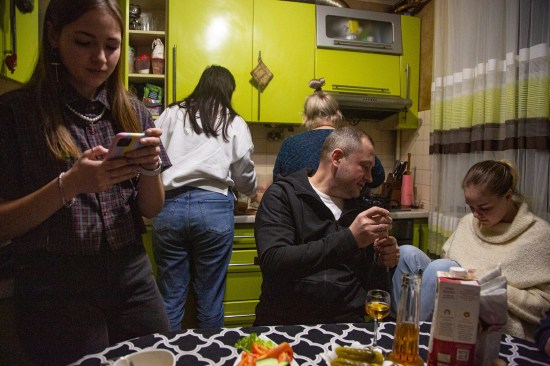 The Holovatenko family waits, watches, and squabbles as the threat of Russian invasion looms nearer in Avdiivka, Ukraine, on Feb. 19.Jack Losh photos for Foreign Policy

AVDIIVKA, Ukraine—As cognac is poured and Russian guns approach, the Holovatenko family cram into their kitchen and shrug off a looming war.

Artillery strikes have once again erupted around the eastern Ukrainian town of Avdiivka and the entire front line. Yet inside their second-floor apartment, explosions are drowned out by lively debate and affectionate teasing between relatives divided by politics, bound by love, and increasingly worried by what awaits their homeland.

“Ukraine needs to join NATO,” said 43-year-old Vitaliy, a former cop, as he tucks into a steaming plate of carbonara. “[Russian President Vladimir] Putin won’t bother us then.” His sister-in-law isn’t convinced, and the conversation shifts to Ukraine’s rulers, including former pro-Russian Ukrainian President Viktor Yanukovych, who was ousted eight years ago.

“Yanukovych was a good guy,” said Vitaliy’s sister-in-law Angela, a proud Ukrainian with a strong affinity for Russia. “He helped Donbass. At least Ukraine was more stable back then.”

A phone rings and Vitaliy’s wife, Irina, answers. It’s her 71-year-old father calling from neighboring Russia. “Ukraine is the one who is attacking,” he said. “Russia will come to the aid of these people.”

Hearing this, Vitaliy shouts angrily across the room as Irina shushes him, barely suppressing a grin. Daria, the couple’s 18-year-old daughter, rolls her eyes. All she wants is to finish her English-language studies and travel across the United States.

This kitchen-table drama on Europe’s troubled frontier unfolded on Saturday night, a day after U.S. President Joe Biden said he was convinced that Putin had decided to invade Ukraine—an attack that could happen in the “coming days.” His comments followed the collapse of a truce between Ukraine’s forces and Russian-backed separatists as the latter launched an intense artillery barrage, shelling a kindergarten and injuring three people.

Unity Day came and went in Kyiv. The threat from Russia remains.

Ukraine’s Kids Are Literally on the Front Line

Following warnings from U.S. intelligence that Russia was planning false flag operations to justify a renewed military intervention, a string of apparently staged acts of violence ensued, including an explosion from an alleged car bomb in the separatist capital, Donetsk; a fire at a gas pipeline in neighboring Luhansk; and the dubious appearance of two freshly exploded shells on Russian territory near the Ukrainian border.

On Friday evening, sirens sounded in eastern Ukraine’s breakaway areas as Moscow’s proxy leaders there announced a mass evacuation of residents to Russia in what observers have criticized as a bid to foment tension and create a pretext for invasion. The next day, the breakaway statelets announced general mobilization, with military-age men between the ages of 18 and 55 banned from leaving. Meanwhile, tens of thousands of Russian troops doing exercises in Belarus, who were meant to leave, are now staying put.

This firestorm of propaganda and disinformation has also seen Putin baselessly accuse the Ukrainian government of committing genocide, as Russian officials purport that mass graves of hundreds of Russian-speaking civilians were found in Donbass—a grim echo of the toxic, belligerent messaging that accompanied the outbreak of war there in 2014. All of this has placed Donbass at the center of Russia and the West’s standoff: whether to bog down Ukrainian troops in the east before being outflanked by a possible Russian attack from the north, coerce Kyiv into direct talks with pro-Russian separatist leaders, or even pressure Ukraine into accepting all of Russia’s demands.

Either way, the flare-up is stoking fears that the industrial, war-weary east could be used as a tinderbox to ignite what British Prime Minister Boris Johnson on Sunday warned could be “the biggest war in Europe since 1945.” 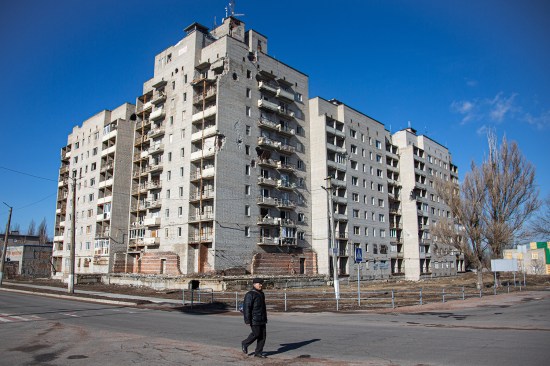 A man walks past a bombed-out building, gutted during earlier fighting in the conflict, on the edge of Avdiivka, Ukraine, on Feb. 20.

Among the places lying in the firing line is Avdiivka, an industrial, Ukrainian government-held town just north of Donetsk that has taken repeated hits since war broke out in 2014, with slag heaps and a large coke plant towering over nearby military positions. For every Ukrainian who snubs the area as a polluted coal stove, in the words of travel writer Andrew Evans, “there is another one who calls it home.”

Irina and Vitaliy wouldn’t swap it for anywhere. Living in one of the town’s many drab, gray apartment blocks, the couple is not blind to the escalating threat but instead pushes on with a mix of fatalism and unruffled defiance, tinged with growing unease about the specter of war.

“I can’t just leave,” said Irina, a 41-year-old primary school teacher whose no-nonsense hospitality comes with a sharp nose for business, managing a nearby restaurant and renting flats elsewhere in town. “My job’s here. So is my family. But if things really get worse, we’ll go to Kyiv and stay with my brother.” 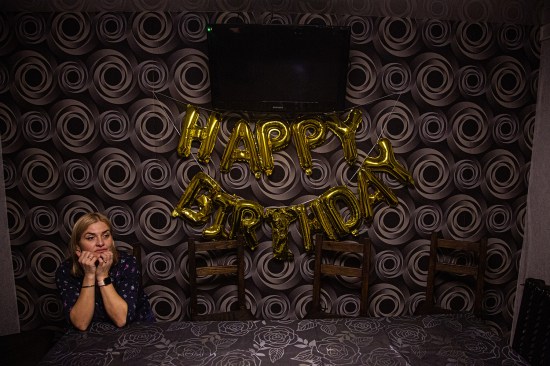 Irina Holovatenko sits in the private function room of her restaurant in Avdiivka, Ukraine, on Feb. 19.

In recent weeks, she has prepared her school’s bomb shelter and overseen lessons teaching children to be safe during artillery attacks. “Of course I’m worried,” she added. “But we are optimistic people and just hope that everything will be okay.”

After dinner, she and her sister clear away the plates while their husbands watch Italian soccer highlights on TV. “We want Russia to return our lands,” said Vitaliy, married to Irina for 22 years after they grew up together in the town. “I hope dialogue will sort all this, but if Russia does invade, it will be very dangerous to stay.”

As the TV highlights finish, his brother-in-law Konstantin ducks out of the room to come back with his electric guitar. He strums the opening chords to “Kukushka,” a song by the iconoclastic Soviet rockers, Kino, as the family joins in with the lyrics.

“Who will follow the lone trail?” they sang. “Strong and courageous heads laid down in the field in battle.” 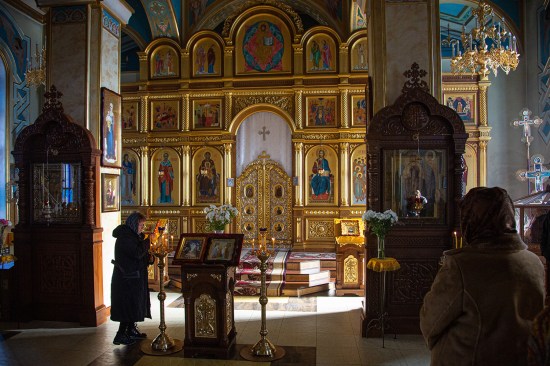 Worshippers pray at an Orthodox church on the outskirts of Avdiivka, Ukraine, close to the front line on Feb. 20.

The following morning, after a night disturbed by rumbles of shelling, it is time for church. As news breaks that Russian troops will stay in Belarus indefinitely, heightening fears that its forces are preparing for an imminent war, Vitaly’s daughter Daria leaves the apartment with her aunt, Angela, and uncle, Konstantin. On the way, they drive past residential blocks ruined by earlier bombardments.

“I almost died here,” Daria said on one stretch. “A shell exploded when I was 12, and a large piece of shrapnel flew past my head, a few centimeters away.”

At the church, just a few hundred yards from front-line positions in an industrial district ravaged by years of fierce fighting, worshippers shuffle inside the building and kiss the icon beneath an ornate altarpiece adorned with gold leaf and depictions of Jesus Christ. Candles flicker, women in headscarves cross themselves, and the priest intones an ancient liturgy of Church Slavonic, recalling a distant time of greater unity in today’s restive region. 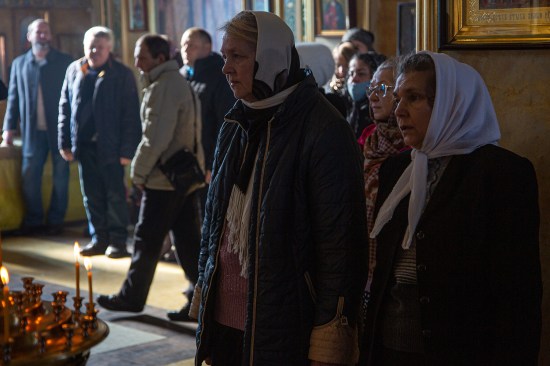 Worshippers pray at an Orthodox church on the outskirts of Avdiivka, Ukraine, on Feb. 20.

Afterward, Angela, Konstantin, and Daria head outside and bump into 64-year-old Nataliya Shlyakhova as she buttons up her fur jacket against the cold breeze, ready to walk home in a town where she’s lived her entire life.

“Home is home,” she said, flashing gold teeth with a warm smile. “At home, even your walls help you. People here just want peace. I will decide what to do depending on the situation—if it’s dangerous, I will leave with my granddaughter, and my daughter will stay to work.”

Below the hill, the front line stretches out, the wreckage and waste of years of conflict telling of the catastrophe that could soon befall the entire country. Given the circumstances, it seems bold of the pensioner to chance a trip to this Sunday service.

“I’m not afraid to come to church,” Shlyakhova said. “I fear only God.”

You are commenting as . Change your username | Log out
Tags: Russia, Security, Ukraine

NEW FOR SUBSCRIBERS: Want to read more on this topic or region? Click + to receive email alerts when new stories are published on Security, Russia