AVDIIVKA, Ukraine—Although the day would end with advancing columns of Russian armor in eastern Ukraine, it began almost normally for the fourth graders of Avdiivka’s School Number 7.

On a bright, chilly Monday morning, the young students put on traditional embroidered shirts and, despite nearby shelling overnight, headed to class for a special day of celebrating the Ukrainian language. Once in the building, they filed into the school’s theater for dance class.

“I feel proud when I see these children perform,” said Arina Dubova, their teacher. “Dancing helps me during these difficult times. It makes me feel calm. For now, I’m OK—I’ve gotten used to the fighting over the years.... As for what happens next, who knows.”

AVDIIVKA, Ukraine—Although the day would end with advancing columns of Russian armor in eastern Ukraine, it began almost normally for the fourth graders of Avdiivka’s School Number 7.

On a bright, chilly Monday morning, the young students put on traditional embroidered shirts and, despite nearby shelling overnight, headed to class for a special day of celebrating the Ukrainian language. Once in the building, they filed into the school’s theater for dance class.

“I feel proud when I see these children perform,” said Arina Dubova, their teacher. “Dancing helps me during these difficult times. It makes me feel calm. For now, I’m OK—I’ve gotten used to the fighting over the years…. As for what happens next, who knows.”

But as the day wound on, the region would tilt closer to war. By evening, Russian President Vladimir Putin would deliver a rancorous speech arguing against Ukraine’s very right to exist. He would then recognize the self-proclaimed Donetsk People’s Republic and Luhansk People’s Republic as independent—a significant shift from Russia’s yearslong policy that all but trashes the Minsk peace accords.

Those breakaway territories lie just across a no man’s land on Avdiivka’s outskirts. 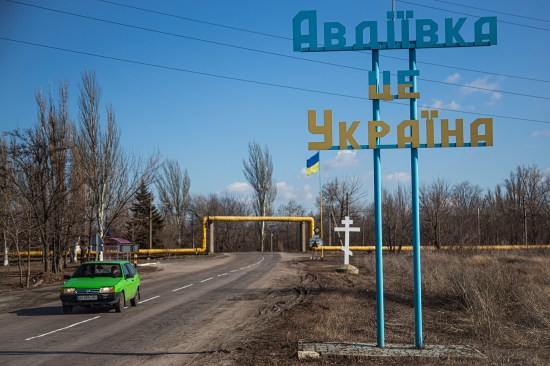 A sign announcing “Avdiivka Is Ukraine” is seen on the outskirts of the town on Feb. 21.

He also ordered the deployment of Russian forces into these breakaway territories, purportedly to “keep the peace.” Tanks and other military hardware were soon seen moving through Donetsk, with no insignia visible.

Sanctions and international condemnation have followed. The United Kingdom announced it would freeze the assets of five banks and three Russian billionaires, hitting them too with U.K. travel bans—although Prime Minister Boris Johnson faced criticism from members of Parliament who demanded he go further. “They need to feel the pain of the first part of this decision,” said Iain Duncan Smith, the former U.K. Conservative Party leader.

German Chancellor Olaf Scholz froze Nord Stream 2, the controversial gas pipeline that would link Germany and Russia. Later on Monday, the European Union announced it would sanction the members of the lower house of Russia’s parliament who voted in favor of recognizing the breakaway regions, as well as banks and the defense sector, while limiting Russian access to European capital markets.

Divided by Politics, Bound by Love: A Ukrainian Family Waits for War

As Russian shelling and provocations intensified over the weekend, one Ukrainian family awaits the worst.

Putin’s Speech Laid Out a Dark Vision of Russian History

There’s no room for Ukraine in the Russian leader’s distorted telling of the past.

Amid the clamour of condemnation, Putin dramatically increased the likelihood of all-out war, saying that Russia would support the territorial claims of its proxy states beyond their current frontiers into territory that includes towns and cities under Ukrainian government control.

“Who in the Lord’s name does Putin think gives him the right to declare new so-called countries?” U.S. President Joe Biden said Tuesday afternoon while announcing the first round of U.S. sanctions. “To put it simply, Russia just announced that it is carving out a big chunk of Ukraine.”

In a further worrying sign, Russia said it would evacuate its diplomatic staff from Ukraine. “This is the most dangerous moment in European security for a generation,” warned NATO Secretary-General Jens Stoltenberg. “Every indication is that Russia continues to plan for a full-scale attack on Ukraine.”

But analysts said they had little faith the sanctions would deter Putin, leaving communities such as Avdiivka at the mercy of a full-scale Russian assault.

“They’re not enough to stop him from invading,” Simon Schlegel, a senior Ukraine analyst with the International Crisis Group, told Foreign Policy. “They’re an important sign, but he’s already there. The people who take these decisions inside the Russian government—their interests are very well protected.” 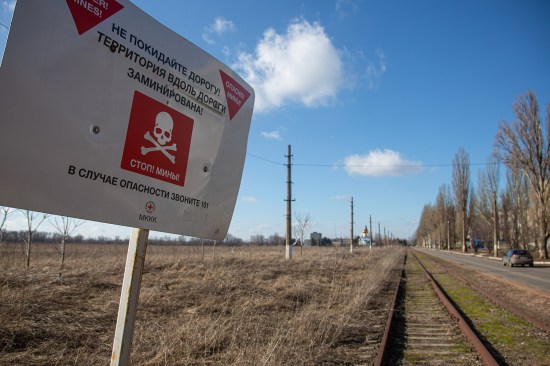 A sign warns of landmines in a field on the edge of Avdiivka, Ukraine.

A sign warns of land mines in a field on the edge of Avdiivka on Feb. 20.

Still, Ukrainians have largely kept their cool, albeit with growing unease. Most residents of Avdiivka are familiar with the horrors of war. The damage from previous indiscriminate artillery barrages is plain to see. Minefields ring its eastern and southern flanks, and entire apartment blocks on the outskirts stand in bombed-out dereliction.

“Of course we’re worried,” said Irina, 57, who runs a bakery stall at the bustling market in town. “I don’t watch the news—I only need to watch the situation from my window. And it’s been a lot worse lately.”

The fear of invasion is hitting businesses in the town, as customers save rather than stockpile. “People are hanging onto their money,” said 40-year-old Aleksander Shabashov, a shopkeeper in Avdiivka. “Business is tough, and we don’t feel safe. I’m Russian, but I want to live in Ukraine in peace.”

Bombarded by propaganda, some residents have given up on the news. “I watch Ukrainian and Russian TV, but, to be honest, I only believe what I see with my own eyes,” said 49-year-old Tatiana Evdokimova, a mother of two.

Her family members now face the possibility of being uprooted from their home. “We will go if it gets worse,” she said. “But I don’t know where. Somewhere where there’s peace.”

In the worst-case scenario, millions of people could be forced to flee amid a new refugee crisis for Central European countries. The Czech Republic, Hungary, Poland, and Slovakia have all said they are preparing for this possible forced migration, while the U.N. refugee agency has warned that the situation is “highly unpredictable” and stands ready to help. 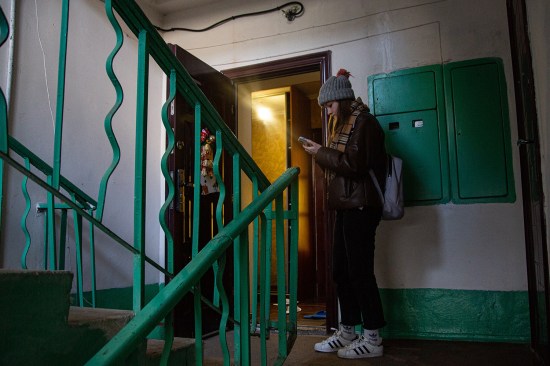 Daria Holovatenko, 18, flicks through her iPhone on the stairwell outside her aunt's apartment in Avdiivka, Ukraine, as the threat of Russian attack looms.

Daria Holovatenko, 18, flicks through her iPhone on the stairwell outside her aunt’s apartment in Avdiivka on Feb. 20.

The humanitarian and logistical challenges would be immense—a total sea change from the last few years of coordinated, relatively stable aid operations in Donbass.

“Scaling up to an emergency intervention would be very hard,” said Schlegel of the International Crisis Group. “The current confusion makes it incredibly tough for humanitarian organizations to plan.”

As night fell over Avdiivka, a few residents crammed into a small, family-run restaurant lit by disco lights with a soundtrack of Russian rap. In one corner, a small party celebrating a couple’s fifth wedding anniversary was in full swing. Robert Kharun, who works at the local coke and chemical plant, topped up his friends’ drinks with vodka, as his wife, Svetlana, shrugged off the specter of war. 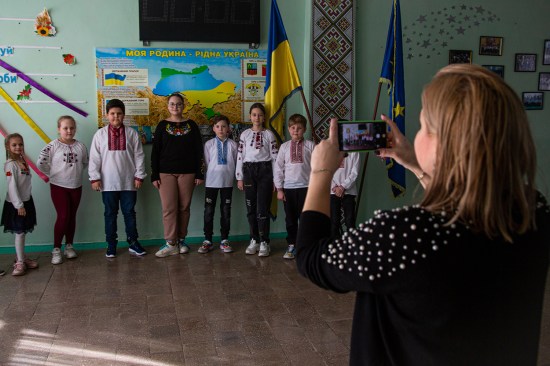 A teacher photographs schoolchildren in Avdiivka, Ukraine, after they dressed in traditional Ukrainian embroidered shirts, on a day celebrating the Ukrainian language.

A teacher photographs schoolchildren dressed up in vyshyvankas, or traditional Ukrainian embroidered shirts, on a day celebrating the Ukrainian language in Avdiivka on Feb. 21.

“Sometimes I feel uneasy, but hey—don’t worry, be happy,” said the 30-year-old, whose mother was on babysitting duty back at their apartment. “No one knows what will happen. Tonight, we enjoy ourselves.”

The mood was similarly upbeat in another room as teenagers ate cake at a 16th birthday party.

“It’s scary of course, but we still live our lives,” said 15-year-old David Vorobyov, one of the guests, who was just 7 when the Donbass war first erupted. “Growing up here, we’ve kind of gotten used to it.”

Still, the worst might be yet to come. “I think an invasion will happen,” he added. “I don’t know why—it’s just a feeling I have. But I don’t want to leave. Everything I’ve ever known is here.”

You are commenting as . Change your username | Log out
Tag: Ukraine

One small town in Ukraine held off a Russian attack and helped liberate a key regional capital.

Ukraine Battles On in the Dark