NATO chief confirms no alliance forces will deploy to Ukraine.

Welcome back to Foreign Policy’s SitRep. It’s a dark day for the world as Russia launches war in Ukraine. Plus: U.S. President Joe Biden’s envoys appear close to clinching a new Iran deal, and Australia’s intel chief rebukes its prime minister over China.

NATO Chief: “Peace in Our Continent Has Been Shattered”

Welcome back to Foreign Policy’s SitRep. It’s a dark day for the world as Russia launches war in Ukraine. Plus: U.S. President Joe Biden’s envoys appear close to clinching a new Iran deal, and Australia’s intel chief rebukes its prime minister over China.

NATO Chief: “Peace in Our Continent Has Been Shattered”

NATO scrambled more than 100 warplanes to patrol its airspace and its forces have been put on high alert as Russia launches what appears to be an all-out assault to conquer Ukraine.

“Peace in our continent has been shattered,” said NATO Secretary-General Jens Stoltenberg in an address on Thursday after an emergency NATO meeting. “We now have war in Europe, on a scale and of a type we thought belong to history.”

He later reiterated that NATO had no plans to send alliance troops into Ukraine, which is not a member of the alliance, and that all 30 NATO members retained their “ironclad” commitment to collective defense.

NATO has activated its defense forces and has 120 warships from the Mediterranean Sea to the North Atlantic also on standby.

Stoltenberg also said the alliance was working to deconflict with Russia as missile strikes were spotted as far west as Ivano-Frankivsk, just over 100 miles from NATO-allied soil. Western officials are concerned about the danger of miscalculation or mistakes so close to NATO borders in a way that could dangerously escalate the conflict beyond Ukraine.

In Ukraine. Russian military forces launched offensives on Ukrainian cities, military bases, and airports from the east, north, and south in the early hours of Thursday morning local time as Ukrainian citizens loaded into trains and cars to flee west. Ukrainian Defense Minister Oleksii Reznikov announced that any Ukrainian citizen ready and able to hold a weapon can enlist with the country’s territorial defense forces to fight the Russian invasion.

Top Western officials concede that Ukraine is outmanned and outgunned in the fight but are holding out hope that Ukrainian defense forces can blunt the worst of the Russian advance.

Anger, regret from Western Europe. Across Europe, officials reacted to the invasion with a mixture of shock, horror, and even regret as some realized they gravely miscalculated the intentions of Russian President Vladimir Putin in the run-up to the invasion.

“I’m so angry at ourselves for our historical failure. After Georgia, Crimea, and Donbas, we have not prepared anything that would have really deterred Putin,” tweeted Annegret Kramp-Karrenbauer, the former German defense minister.

More sanctions announcements, including from Washington, are likely on the way as soon as Thursday while Moscow’s stock index and price of the Russian ruble plummeted to modern historic lows. But Ukrainian and Eastern European officials aren’t satisfied with the initial response since others in the alliance are yet to roll out stiffer sanctions that would cut off Russia’s economy from the rest of the world.

The play-by-play. For weeks, U.S. and British officials have outlined an exact play-by-play of Russian invasion plans (which Russian officials dismissed as false and alarmist, right up until the point they invaded). Republican Sen. Marco Rubio, vice chairperson of the U.S. Senate Intelligence Committee, tweeted out the sequencing of Russia’s attack plan ahead of the Russian military carrying out its invasion, giving a small sliver of insight into the depths of U.S. intelligence on Moscow’s plans.

A deal in sight. U.S. negotiators appear poised to announce a diplomatic breakthrough with Iran on a new nuclear deal after months of painstaking negotiations. The stakes are high because Iran has shortened its “breakout time” for its ability to produce nuclear weapons-grade fissile material to just several weeks, according to estimates from U.S. officials.

State Department spokesperson Ned Price told reporters on Wednesday that while no agreement has been finalized, “there has been significant progress.” Any final deal from team Biden is likely to face significant pushback in Congress, primarily from Republicans who have decried the president’s efforts to reopen negotiations with Iran, but also possibly from hawks in the Democratic caucus. In any other news cycle, this might have been front page news for the Biden foreign-policy team. But alas…

High stakes, low energy. Russia’s invasion of Ukraine and ensuing Western sanctions on Moscow could have massive ripple effects across the global energy and commodities markets, as FP reported this week.

Even before Putin announced a new military operation in Ukraine, oil prices had already spiked to seven-year highs. Given Russia’s role as a global exporter of commodities and energy, most analysts expect worse to come, meaning higher prices on gas, oil, coal, wheat, and other commodities. Europe will bear the brunt of it, and this conflict could be a major test of whether overreliance on Russian energy weakens Europe’s resolve in supporting Ukraine.

Tsk tsk. Australia’s top intelligence chief issued a rare public rebuke of Australian Prime Minister Scott Morrison in a TV interview this week over concerns of China’s growing political influence in the country. Morrison accused the opposition Labor Party of being too soft on China—something Australia’s director-general of security, Mike Burgess, described as unhelpful, saying China’s influence in the country was a national problem not limited to one party.

Last month, Australian intelligence services publicly said it foiled a covert plot for China-linked financiers to gain influence with and bankroll campaigns of Australian politicians gearing up for federal elections. 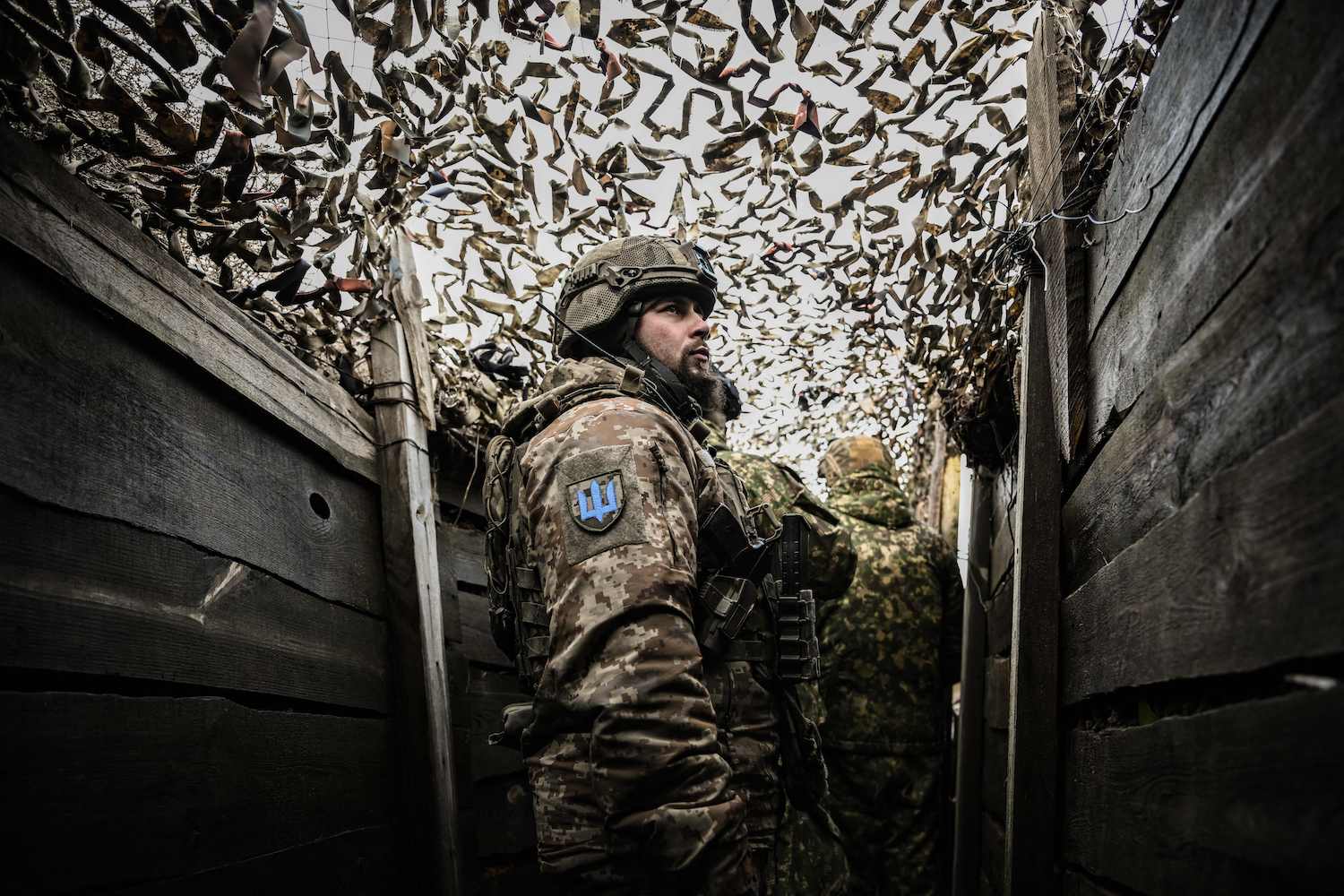 A Ukrainian soldier patrols at the front line.

Ukrainian troops patrol at the front line outside the town of Novoluhanske, eastern Ukraine, on Feb. 19.Aris Messinis/AFP via Getty Images

Feb. 25: The United Nations Security Council convenes for a meeting on the crisis in Syria.

March 1: Biden is scheduled to give his annual State of the Union address to Congress.

“There is no purgatory for war criminals. They go straight to hell, ambassador.”

—Sergiy Kyslytsya, Ukraine’s ambassador to the United Nations, to his Russian counterpart at an emergency U.N. Security Council meeting on Russia’s invasion of Ukraine

NEW FOR SUBSCRIBERS: Want to read more on this topic or region? Click + to receive email alerts when new stories are published on Military, Russia, Europe

Will Russia Kill the OSCE?

Pakistani Taliban Go to War While People March for Peace

What Jiang Zemin's Death Means for the CCP

U.N. Invites Ambassadors for Meeting With Taliban in Kandahar

French Ambassador Wants to Side With Washington Ahead of Macron Visit

How a GOP-Led House Can Strengthen Biden's Foreign Policy

With a steady hand—and some willingness to face criticism—he ushered China into the world economy.

House Republicans are already planning a batch of investigations.