The Kharkiv Resistance Has Already Begun

“We really feel that the whole world is with us,” a resident said.

KHARKIV, Ukraine—Local men in jeans and civilian jackets were unloading Kalashnikov rifles and crates of ammo from a car on Thursday as the first signs of a guerrilla insurgency emerged within hours of Russia invading Ukraine. The resistance has already begun.

“I cannot say that I am not scared, but this is our destiny,” said one of them, a mechanic, who declined to give his name due to security concerns. “We are waiting for the Russians and will welcome them to hell.”

“We are volunteers,” said another in black sneakers and sweatpants. “We will die for Ukraine.”

KHARKIV, Ukraine—Local men in jeans and civilian jackets were unloading Kalashnikov rifles and crates of ammo from a car on Thursday as the first signs of a guerrilla insurgency emerged within hours of Russia invading Ukraine. The resistance has already begun.

“I cannot say that I am not scared, but this is our destiny,” said one of them, a mechanic, who declined to give his name due to security concerns. “We are waiting for the Russians and will welcome them to hell.”

“We are volunteers,” said another in black sneakers and sweatpants. “We will die for Ukraine.”

Other men, who said they had previously fought with the Ukrainian army in Donbass in 2014 and 2015, looked on before squirreling the arms cache into a nearby building. 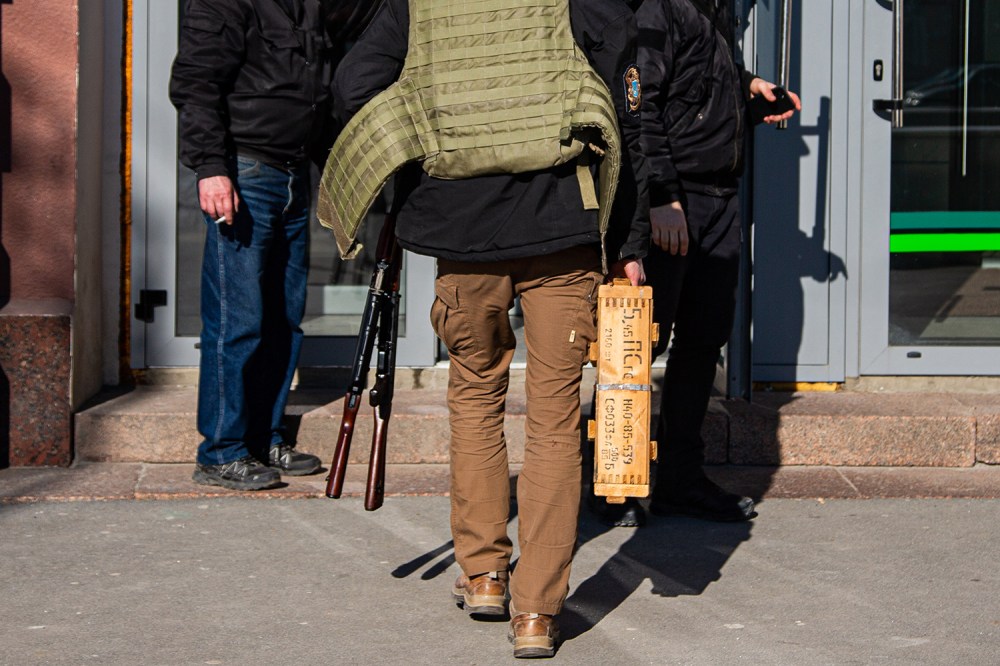 Ukrainian men carry guns and ammo into a building in Kharkiv before the arrival of Russian troops on Feb. 24.

Ukrainian men carry guns and ammo into a building in Kharkiv before the arrival of Russian troops on Feb. 24.

In recent days, ahead of Russia’s devastating blitzkrieg on multiple fronts across Ukraine, Western allies have discussed how to arm any Ukrainian resistance that emerges to confront Russian aggression. British Prime Minister Boris Johnson told the Munich Security Conference last Saturday that “a lightning war would be followed by a long and hideous period of reprisals and revenge and insurgency.”

As Ukrainian Defense Minister Oleksii Reznikov called on all citizens able to hold a weapon to mobilize, this small band of urban partisans in Kharkiv appears to be the first bud of an underground resistance.

Elsewhere in the country’s second-largest city, Ukraine’s more conventional forces are preparing for a Russian assault. Scores of young Ukrainian soldiers were seen hurrying through the streets to man positions along key routes into the city. 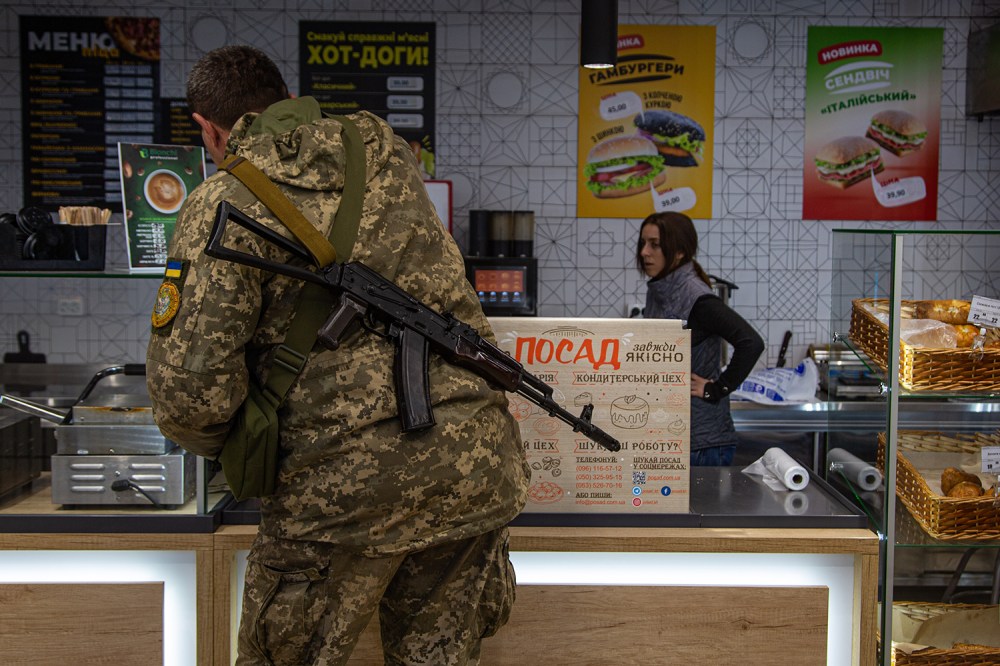 A Ukrainian soldier buys a coffee from one of the only open supermarkets in Kharkiv on Feb. 24.

A Ukrainian soldier buys a coffee from one of the only open supermarkets in Kharkiv on Feb. 24.

One of them, Aleksander, said he relished the prospect of imminent battle.

“I feel amazing,” he said. “This is our moment for revenge.”

In contrast to this martial bravado, civilians were feeling the full brunt of Moscow’s ruthless offensive. A boy died when shelling struck an apartment block near Kharkiv, one of 57 people who were killed on Thursday, along with 169 wounded, according to Ukraine’s health minister. 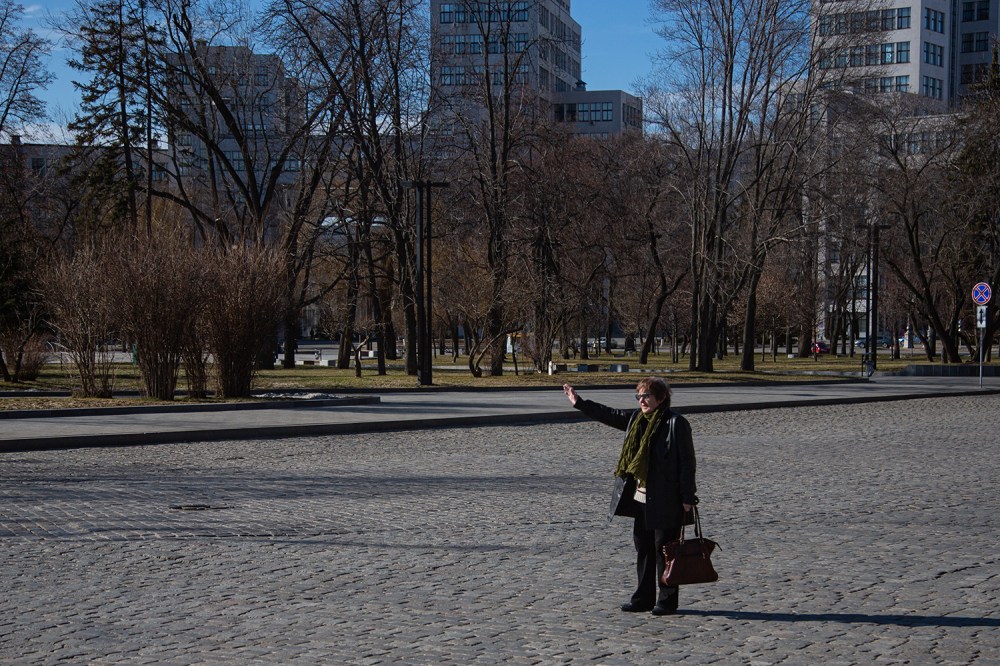 Alla Galakhtyonova, 80, tries to flag down cars in central Kharkiv after fleeing the Russian bombardment on Feb. 24.

Alla Galakhtyonova, 80, tries to flag down a car in central Kharkiv after fleeing the Russian bombardment near the border on Feb. 24.

Under blue skies and approaching bombs, 80-year-old Alla Galakhtyonova stood on the cobbles of Kharkiv’s Freedom Square, trying to thumb a lift as cars sped past.

She had arrived in the city an hour earlier after fleeing her village near the Ukrainian-Russian border under intense bombardment. Her sister lived on the other side of Kharkiv, and she was desperate to seek shelter there.

“It was terrible,” said Galakhtyonova, a widow. “I’ve never heard or seen anything like it.”

For her, Thursday’s atrocious events have killed whatever was left of her country’s kinship with Russia. “I used to think they were good people,” she said. “Now I think they want only war.” 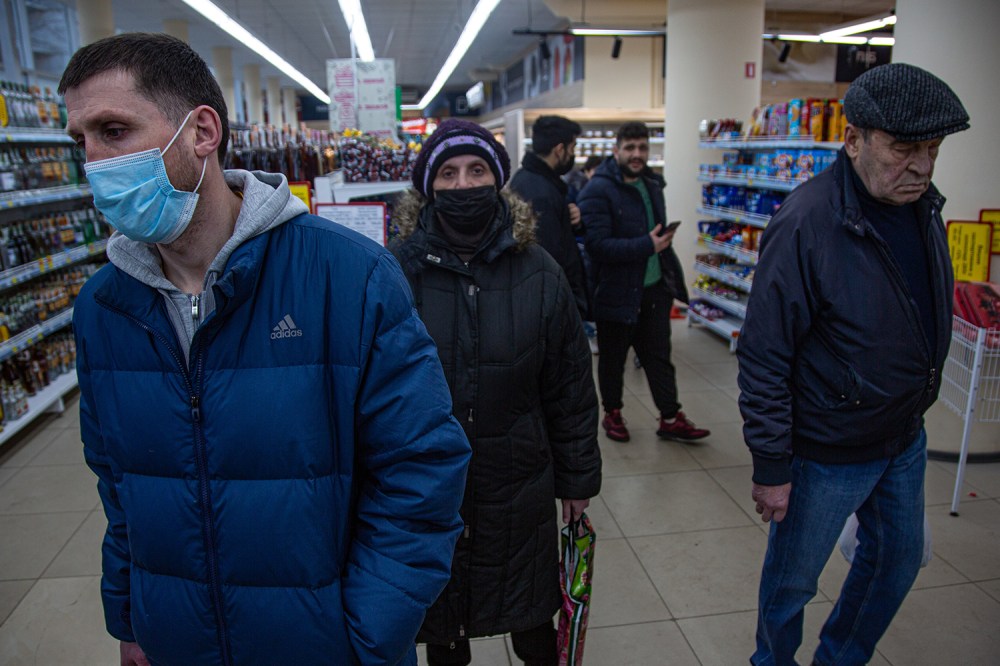 Customers queue at the checkout of one of the only open supermarkets in Kharkiv on Feb. 24.

Customers line up at the checkout of one of the only open supermarkets in Kharkiv on Feb. 24.

She is among the vast numbers of Ukrainians now on the move as neighboring countries prepare for an influx of refugees fleeing the invasion. Amid the nationwide barrage of Russian airstrikes, more than 100,000 people packed their bags and left home, according to estimates by the U.N. refugee agency—either moving to other Ukrainian areas or leaving the country altogether.

Large numbers headed to the border with the European Union, amid massive lines at border crossings, as some even crossed on foot with their suitcases into Poland and Hungary.

Elsewhere, as fighting raged across practically the entire country, the Ukrainian port city of Mariupol came under heavy fire, while the Ukrainian Ministry of Internal Affairs said one Russian helicopter and three other unknown helicopters were downed in the Kyiv region.

Thursday’s spate of horrors prompted U.S. President Joe Biden to warn that Russian President Vladimir Putin was not likely to stop at Ukraine. “He has much larger ambitions than Ukraine,” Biden said in remarks Thursday afternoon. “He wants to, in fact, reestablish the former Soviet Union.” 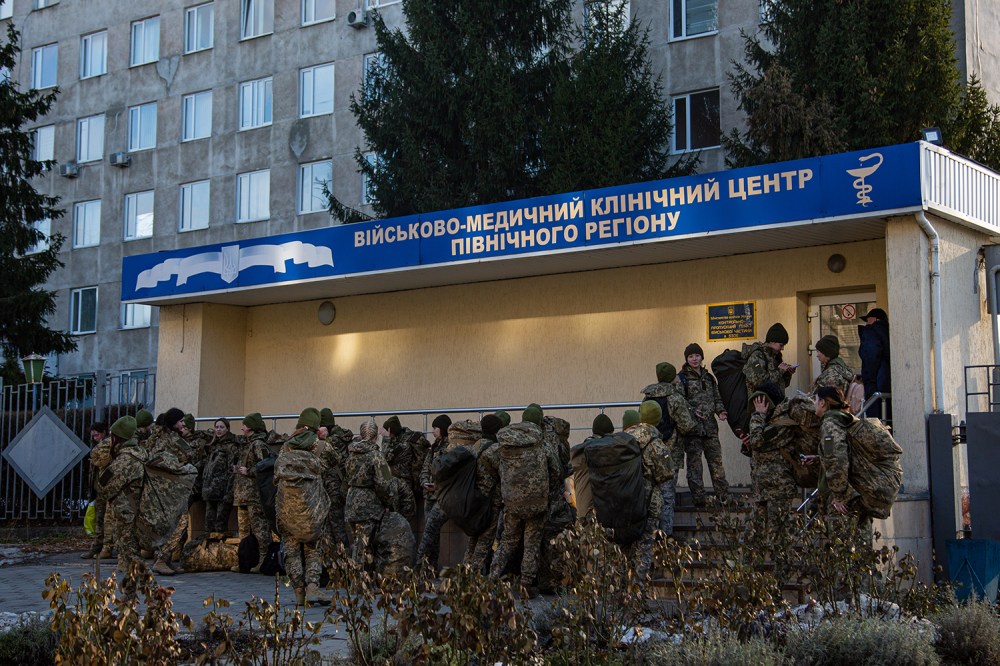 Ukrainian troops head to their barracks ahead of a feared Russian assault on Kharkiv on Feb. 24.

Ukrainian troops head to their barracks ahead of a feared Russian assault on Kharkiv on Feb. 24.

However, on the streets of Kharkiv, where a protracted siege and brutal assault are feared, hope is not yet snuffed out.

Aleksander and Katya, a young couple, were uprooted from their home in Donetsk seven years ago. Today, they face a catastrophe of even greater scale yet remain defiantly optimistic.

“Sure, this is intimidating, but we keep going,” said Aleksander, a 27-year-old who works in tech support. (Both Aleksander and Katya asked to withhold their surnames out of security concerns.) “Donetsk fell very quickly in 2014, when we lived there, but here we actually feel protected. That may seem crazy, but it’s difficult to feel depressed for some reason.”

“In Donetsk, we felt so alone,” said Katya, a computer programmer. “But today we really feel that the whole world is with us.”

For now, though, escape is out of the question.

“We don’t have a lot of leeway,” Aleksander conceded with a shrug. “In order to leave, you need resources, support from relatives, a plan for where you’re going to go, work opportunities, and so on. Look, either we are very brave or not very smart. To be honest, by this point, perhaps we’re just desensitized to war.”

You are commenting as . Change your username | Log out
Tags: Europe, Ukraine, War

Will Qatar Always Be Rich?

EU’s Vestager: Brussels Is Shedding Its Friendly Stance on Beijing

As winter deepens, half of the country’s energy system is already destroyed—and the other half is under threat.

Those who return home find shattered houses, no heat, and the worst yet to come.