Taliban Struggle to Maintain Unity Six Months Into Their Reign

“People don’t trust us yet, but we’re working on it,” one Taliban commander said.

February 28, 2022, 5:36 PM
By Stefanie Glinski, a journalist covering conflicts and crises with a focus on Afghanistan and the wider Middle East.

KABUL—For years, Musa, a 28-year-old fighter who only goes by one name, built bombs for the Taliban in Afghanistan’s southern Helmand province, regularly blowing up cars and sometimes humvees, fighting both Afghan forces and “foreign invaders.”

He has worked hard and “killed many,” Musa said, the push for victory keeping him motivated. When the Taliban took control of the country in August 2021, Musa was thrilled. But his euphoria has since worn off, the adrenaline rush ceasing. He had hoped to be recognized by his commanders for his efforts; instead, he’s now unemployed and living in the former front-line town of Sangin, Afghanistan, where barely a house is standing. “There’s no job for me to do, and I’m bored. I’d like to keep fighting,” the 28-year-old said. The reality of the Taliban’s rule isn’t quite what he had imagined.

Six months into their rule, the Taliban face numerous obstacles both internally and externally. 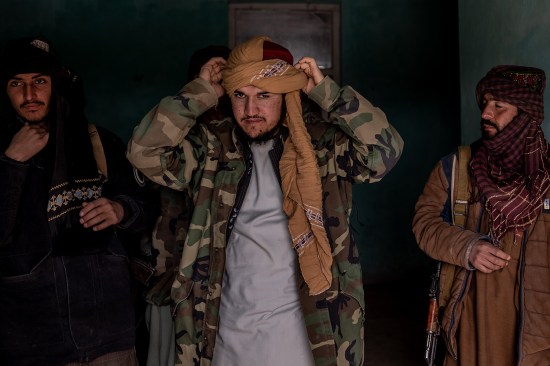 Members of the Uzbek Taliban are seen in Afghanistan’s northern Jowzjan province on Jan. 27.Stefanie Glinski for Foreign Policy

KABUL—For years, Musa, a 28-year-old fighter who only goes by one name, built bombs for the Taliban in Afghanistan’s southern Helmand province, regularly blowing up cars and sometimes humvees, fighting both Afghan forces and “foreign invaders.”

He has worked hard and “killed many,” Musa said, the push for victory keeping him motivated. When the Taliban took control of the country in August 2021, Musa was thrilled. But his euphoria has since worn off, the adrenaline rush ceasing. He had hoped to be recognized by his commanders for his efforts; instead, he’s now unemployed and living in the former front-line town of Sangin, Afghanistan, where barely a house is standing. “There’s no job for me to do, and I’m bored. I’d like to keep fighting,” the 28-year-old said. The reality of the Taliban’s rule isn’t quite what he had imagined.

Six months into their rule, the Taliban face numerous obstacles both internally and externally.

“The Taliban fought a brilliant campaign and had everyone surrender, but pressures are mounting on an already fragile coalition that kicked out the foreigners but doesn’t quite know how to operate,” said Mike Martin, a research fellow at King’s College London and a former British Army officer. “They want foreign money—and aid is what’s partly holding the movement together—but cooperating with the U.S. could result in the group splintering and fighters turning their backs. They are caught between a rock and a hard place.” 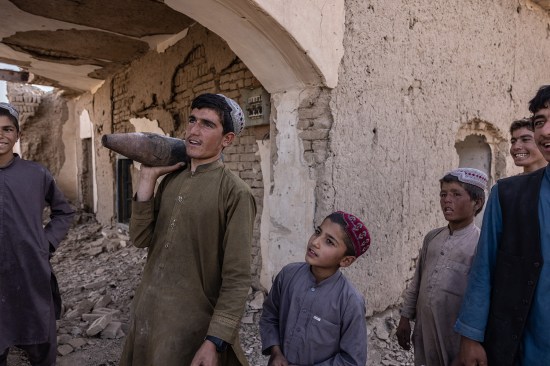 Residents, including a teenage boy holding an empty bomb shell, stand amid the rubble of bombed-out houses in the town of Sangin, Afghanistan, on Sept. 27, 2021.Stefanie Glinski for Foreign Policy 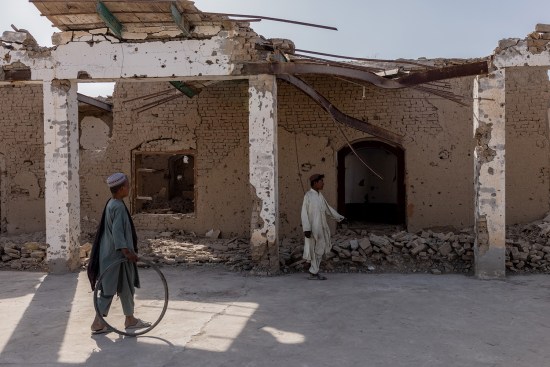 In recent months, rumors of rifts within the group have swirled—all of which the Taliban deny. Mullah Abdul Ghani Baradar, one of the movement’s founders and currently Afghanistan’s deputy prime minister, had opted for diplomacy in Doha, Qatar, becoming the first Taliban leader to speak to a U.S. president and eventually signing a peace deal to end the United States’ longest war in 2020. He’s largely been perceived as one of the more moderate leaders in the movement, with divisions reported between his faction and the more conservative Haqqani network—a branch within the Taliban that is designated a terrorist organization by the United States and has fought hard on the battlefield. The group has been blamed for a number of large-scale attacks and suicide bombings, including an attack on the U.S. Embassy and NATO headquarters in Kabul in 2011 that killed seven people.

Many of their conservative hard-liners, including Afghan Interior Minister Sirajuddin Haqqani, are now heading the government but have previously not necessarily been involved in international diplomacy—allegedly to Baradar’s dismay.

Discrepancies also remain between the Taliban’s leadership and their foot soldiers. Many of the latter have been tasked to kill for years and largely operated on their own without being told what to do; now, they’re being governed by a hierarchical organization and told to peacefully police a nation of almost 40 million people. “The fighters operated in decentralized networks aiming to kill as many as possible but had little understanding of the world or even other Afghans,” Haroun Rahimi, economist and Afghanistan expert, told Foreign Policy. “The Taliban wants them to act more responsibly towards the nation, but it’s difficult. How do you turn these fighters into a group that can operate on principles other than violence? The leadership doesn’t want them to behead people, but can they really stop it?” 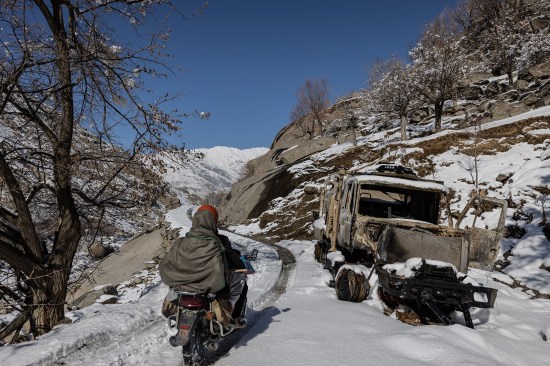 Burned-out army vehicles—signs of the last resistance—sit along the road on the way to Hesarak, Afghanistan, on Feb. 7.Stefanie Glinski for Foreign Policy

Both killings and enforced disappearances have taken place despite the Taliban’s announced amnesty for former government and military officials, Human Rights Watch said, with the Taliban seemingly unable to control and hold their forces accountable.

Although the Taliban is having a rough start half a year into their reign, the group’s messaging has at least become more united and careful—especially when speaking to journalists. Whereas commanders previously voiced discontent and discussed internal challenges with the media, they now act confidently, assuring they have the situation under control.

Qari Ahmad, 35, who taught young Taliban fighters how to wage warfare and build suicide vests for years but has since left the movement, thinks there isn’t any immediate danger of critical fracturing within the Taliban’s ranks. “They share a strong enough ideology,” he said. “It’s impossible for the Taliban government to collapse anytime soon.”

Resistance movements throughout the country begrudgingly admit this too, though many said they are ready to take up arms against the Taliban regardless.

In Hesarak, located in a deep valley in Afghanistan’s Panjshir province, villagers said the resistance is “quiet but alive.” Alongside the gravel road leading up to the small community sit several burned-out army vehicles once belonging to the U.S.-backed Afghan National Security Forces. Long after the Taliban had taken Kabul, battles were still being fought here. 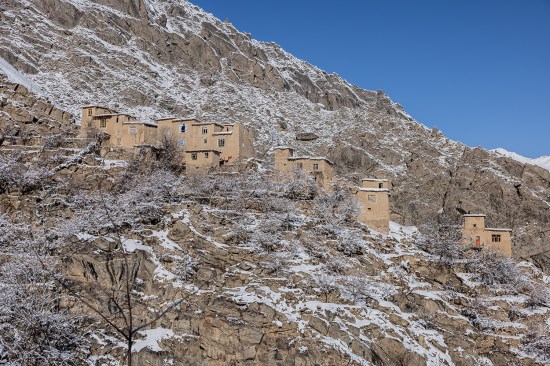 Villagers in Hesarak, located in a deep valley in Afghanistan’s Panjshir province as seen on Feb. 6, say the resistance is “quiet but alive.”Stefanie Glinski for Foreign Policy

Now, the village sits quietly on a hilltop overlooking the valley, the roofs of its mud houses covered with fresh snow, the winter sun shining.

“Almost half of the people left the village this summer, but most have since returned,” a villager in his mid-50s said. “Our commanders have told us not to fight right now, so we’re waiting. We have hidden stocks of weapons in caves, and since the Taliban has come here from other provinces, they don’t know the terrain; they won’t find them.” Nobody in Hesarak wanted to provide their names, deeming it too dangerous.

Many are part of the National Resistance Front, an anti-Taliban military alliance headed by Ahmad Massoud, son of guerrilla commander Ahmad Shah Massoud, who had previously resisted the Soviets as well as the Taliban. Although Taliban fighters are stationed in villages such as Hesarak, interactions between locals and fighters are limited. A Dari Persian-speaking community, people said they are unable to understand Pashto, the vastly different language spoken by the majority of the Taliban.

With Haqqanis at the Helm, the Taliban Will Grow Even More Extreme

The Haqqani network has long been the most lethal and vicious element of the Taliban.

Similar pockets of resistance are found in other parts of Afghanistan, and although none are strong enough to actually launch large-scale warfare, discontent with the Taliban across the country is widespread—especially as poverty and unemployment have risen.

“If they don’t come up with a plan and announce it soon, they will face backlash,” said Ashley Jackson, co-director at the Overseas Development Institute’s Centre for the Study of Armed Groups, of the Taliban government. “They have yet to come up with a political program or compelling vision for the future of Afghanistan.”

In Jowzjan, a flat, desert-like province in the north that is mostly home to ethnic Uzbeks and Turkmen and famous for its cotton and carpet industries, residents in the Khwaja Du Koh district also said they are ready to resist the Taliban. The birthplace of renowned warlord Abdul Rashid Dostum, people there said they are waiting for their leader to return—even though Dostum fled to neighboring Uzbekistan when the Taliban took control of Afghanistan.

“Most [ethnic] Uzbeks here align with Dostum,” said Khalil Mohammed, 40, who lives in Khwaja Du Koh. “These days, you’ll find in many families a man who sides with Dostum and another one who joined the Taliban.” Divisions run deep, but family ties trump them still. “Often, people join certain alliances just to look out for themselves and ensure safety,” he added. 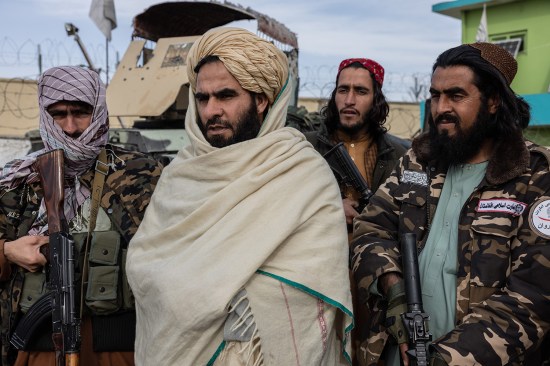 The Taliban said they want to bring unity and peace to a divided Afghanistan, but many Afghans find this hypocritical: As a Pashtun-majority movement, the group gives little space to Afghanistan’s many other ethnic groups.

“People don’t trust us yet, but we’re working on it. They aren’t used to living with us, but we don’t want to create any problems for them—we want to unite our country,” said Taliban commander Mawlawi Abdul Baqi, a turban-clad 44-year-old from Logar province. He turned to the Taliban 21 years ago, when the United States launched its war on terror. “I wanted to help free Afghanistan of the foreign invaders. Now it’s free.” As for the resistance, Baqi laughs it off as rumors. “We will defeat any opposition,” he said.

You are commenting as . Change your username | Log out
Tags: Afghanistan, Taliban