Putin Reaches for the Syria Playbook as Ukraine Invasion Stalls

DNIPRO, Ukraine—Cluster bombs rain down on civilian areas in Kharkiv. Blasts strike a TV tower and nearby Holocaust memorial in Kyiv, a city now under threat of siege. Apartment blocks are reduced to rubble.

Less than a week after it invaded Ukraine, Russia is resorting to the same brutal playbook that caused immense levels of death and destruction in its previous military campaigns, whether carpet-bombing Chechnya in the 1990s or intensifying sieges more recently in Syria. Experts warn that the indiscriminate violence of recent attacks in Ukraine point to a dangerous tactical shift as civilians increasingly bear the brunt of Russia’s multifront assault.

“We are seeing a very similar lack of concern over human life—and we’re seeing this faster than we thought we would,” said Paul Stronski, a senior fellow at the Carnegie Endowment for International Peace. “I don’t know if they lack the capability or the will to target more carefully. I guess it’s a combination.”

DNIPRO, Ukraine—Cluster bombs rain down on civilian areas in Kharkiv. Blasts strike a TV tower and nearby Holocaust memorial in Kyiv, a city now under threat of siege. Apartment blocks are reduced to rubble.

Less than a week after it invaded Ukraine, Russia is resorting to the same brutal playbook that caused immense levels of death and destruction in its previous military campaigns, whether carpet-bombing Chechnya in the 1990s or intensifying sieges more recently in Syria. Experts warn that the indiscriminate violence of recent attacks in Ukraine point to a dangerous tactical shift as civilians increasingly bear the brunt of Russia’s multifront assault.

“We are seeing a very similar lack of concern over human life—and we’re seeing this faster than we thought we would,” said Paul Stronski, a senior fellow at the Carnegie Endowment for International Peace. “I don’t know if they lack the capability or the will to target more carefully. I guess it’s a combination.”

On Monday, Russian rockets bombarded a residential district of Kharkiv, Ukraine’s second-largest city, in what human rights investigators believe was a combined rocket and cluster munition attack. Bodies of civilians were seen strewn along the street, with survivors maimed and missing limbs. Relentless salvos of rockets continued into Tuesday evening.

“Cluster munitions have been banned internationally because of their indiscriminate nature and the unacceptable dangers they pose to civilians at the time of attack and for years after,” said Steve Goose, the arms division director at Human Rights Watch. “They should never be used by anyone at any time, and especially not in populated areas.”

On Tuesday morning, Freedom Square in central Kharkiv was hit by a missile, killing at least 10 civilians, injuring at least two dozen more, and severely damaging the city hall. Camera footage showed a powerful explosion outside the local government headquarters just after 8 a.m. as a fireball charred cars and nearby buildings. In response to the deadly attack, which prompted emergency workers to rummage through a mass of rubble and twisted metal, Ukrainian President Volodymyr Zelensky told the European Parliament that Russia should be considered a “terrorist state.” 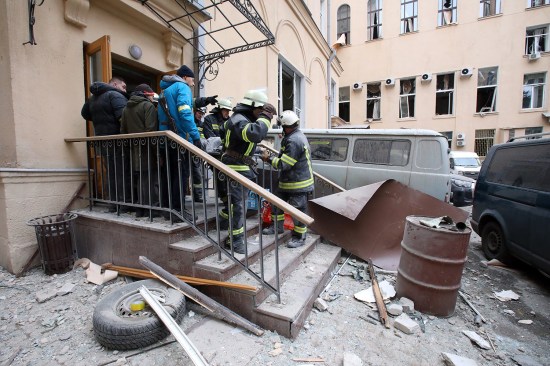 While Russia’s ruthless tactics secured its objectives in Chechnya and Syria—crushing pro-independence rebels in the former and propping up a dictator in the latter—they are unlikely to lead to a successful repeat in Ukraine, experts say.

“Even if they use these tactics to take these cities, what are they going to have left?” said Stronski, a former senior Russia analyst at the U.S. State Department. “The whole thing seems counterproductive. They’re trying, and failing, to poke holes in Western resolve; they’ve actually shored it up. In Ukraine, they’re destroying any soft power they had left. People who may not have been political have now become very angry, because they’ve been bombed out of their homes.”

In Kharkiv, a Desperate Choice: Stay or Go?

The horrifying scenes have sent even more people fleeing, as part of a vast exodus that has already driven more than 600,000 Ukrainians to escape the country. “I tried my utmost to stay in the city until today,” a father of three identified only as Daniel, whose Kharkiv home is less than a mile from the Freedom Square blast site, told the BBC.

“I love my country, I love my city—it is a very beautiful city,” he said. He is traveling toward Moldova or Poland with his wife and young children while his mother and mother-in-law stay behind. “But now it’s been demolished.”

The relentless shelling has drawn international condemnation, with British Prime Minister Boris Johnson comparing it to Serbian attacks on Sarajevo in the 1990s. “It has that feel to me of an atrocity committed deliberately against a civilian center,” he said.

In Kyiv, Russian forces hit a TV tower and nearby broadcasting facilities, killing five people and taking some channels off the air. Meanwhile, Moscow warned it was about to launch further strikes on the capital, urging residents to leave for their own safety—prompting a fearful rush to the main train station. 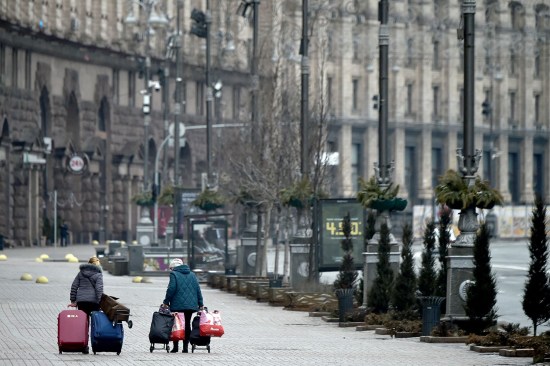 Women carry their belongings as they walk along a deserted street in Kyiv, Ukraine, on March 1.SERGEI SUPINSKY/AFP via Getty Images 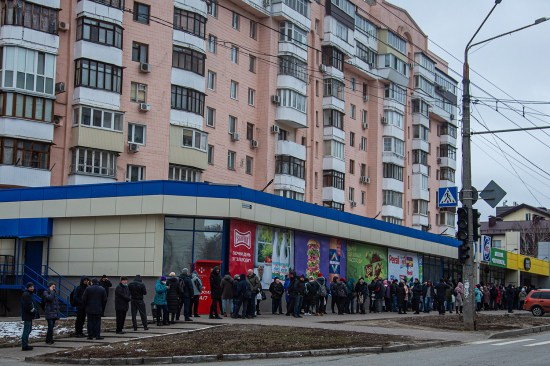 People line up to buy food in Kharkiv on Feb. 28. Jack Losh for Foreign Policy

Alongside these devastating artillery strikes is the growing threat of siege, in which military forces encircle towns and cities and restrict food, medicine, and other essential goods to compel a surrender. Hundreds of thousands of remaining residents in Kyiv, Kharkiv, and elsewhere have been desperately stocking up on goods ahead of a feared blockade, leading to long lines outside depleted supermarkets.

“We’ve seen pictures of empty shelves in Kyiv today,” said Emma Beals, a senior advisor at the European Institute of Peace. “Going into a siege with empty shelves is unthinkable.”

The threat of encirclement—particularly as a miles-long convoy of Russian armored vehicles slogs toward the capital—has recalled tragic scenes among Syria watchers. The punishing impact of sieges brings immense civilian suffering as food, water, medicine, fuel, and other basic necessities disappear under indiscriminate bombing and the emphasis shifts from conflict-ending diplomacy to granular negotiations over access for aid workers and evacuation routes.

“The sieges had existed in Syria before Russia came in, but Russia instrumentalized them,” said Beals, who as a journalist reported extensively in rebel-held areas of Syria resisting Bashar al-Assad’s regime. “One by one, they helped to tighten those sieges and made sure that aid and other important items could not go in and out, except by negotiation.”

“Parts of this now feel very familiar,” she added. “What I’ve found concerning is not just that the Russian playbook seems to be in play, but also the lack of preparedness for what could happen.”

Military experts stress, however, that the siege and strikes are tools of war used not just by Russia.

“If you were to write a list of success factors of urban warfare since 1939, surrounding the target town or city often is a success factor,” said Ben Barry, a land warfare expert and senior fellow at the International Institute for Strategic Studies. “Sometimes an attacker allows civilians to leave by designated routes, and certainly Russia appears to have made this offer in regards to Kyiv. Whether they’d honor it or not, I don’t know.” 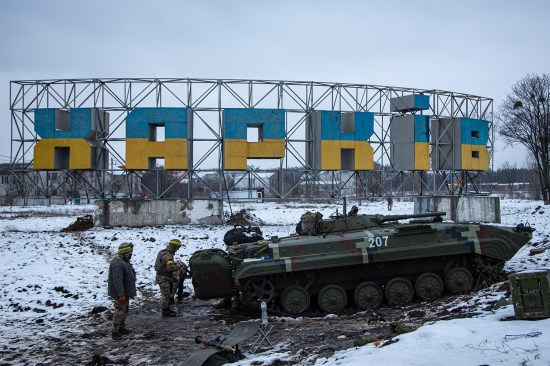 Ukrainian troops gather under a sign saying “Kharkiv” in Cyrillic on the city’s battle-scarred outskirts on Feb. 26. Jack Losh for Foreign Policy

Ukraine’s stiff resistance to the invasion, coupled with Russia’s “shambolic” logistics (in the words of a U.S. defense expert), have frustrated Moscow’s plans for a quick victory. In response, Russia has decided to pummel civilian areas to demoralize resistance and force Ukraine to accept its demands. The devastating attacks on Kharkiv came after Ukrainian troops fended off a botched Russian incursion on Sunday, prompting speculation that the onslaught over the last two days could be a retaliatory move—one that is designed to send a clear message.

“They’re trying to show the Ukrainians that if they stand and fight for this urban terrain, there will be civilian and military casualties,” said Barry, a former British Army commander who served in United Nations and NATO operations in Bosnia.

In the meantime, Ukrainians are left with the dangers and distress inflicted by Russia. On Monday, as rocket fire and artillery strikes echoed across Kharkiv, the southbound road out from the city remained in Ukrainian hands, with tanks, troops, and heavy guns positioned around the southern fringes to fend off any Russian raid. 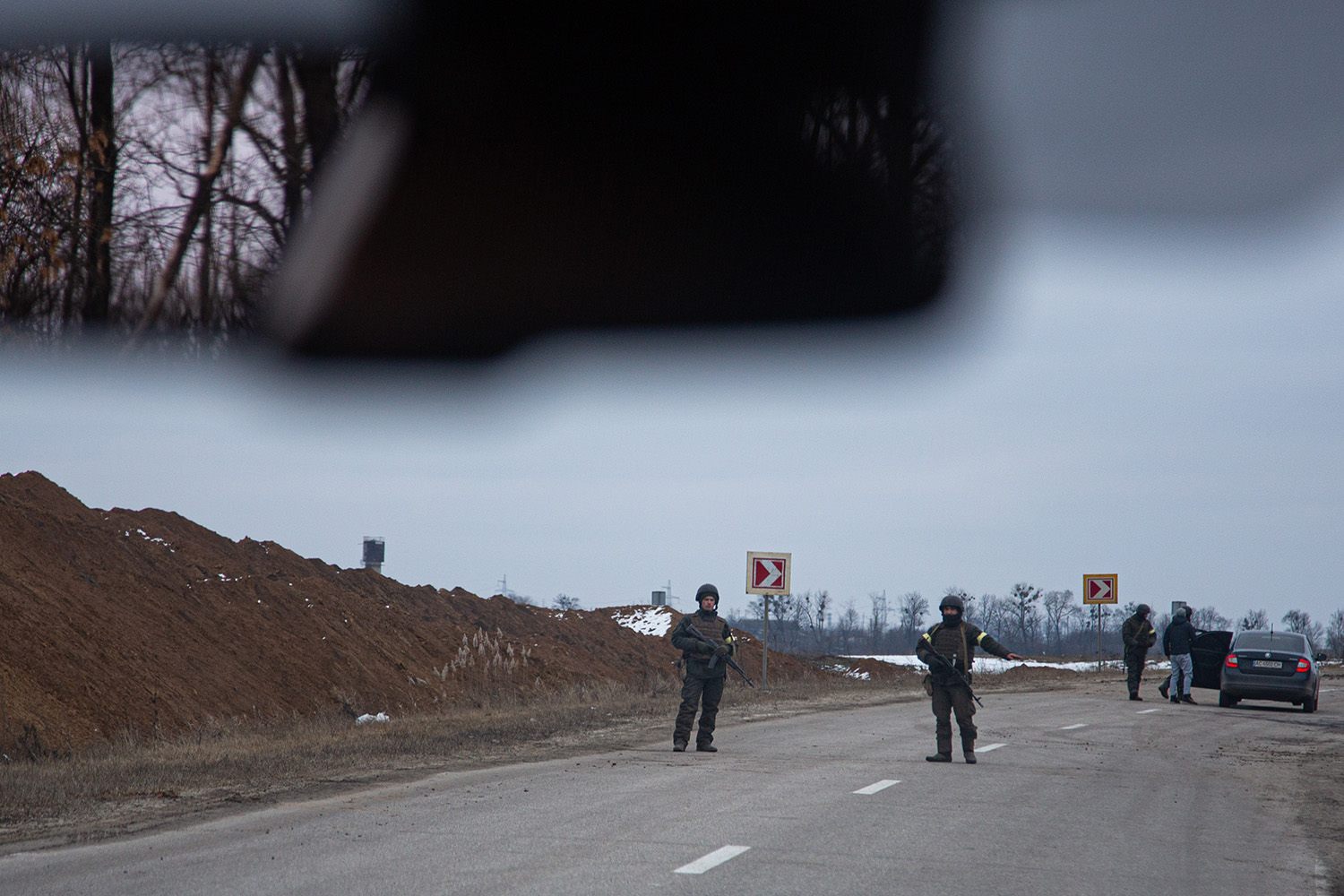 Ukrainian soldiers check papers on the road outside Kharkiv on Feb. 28. 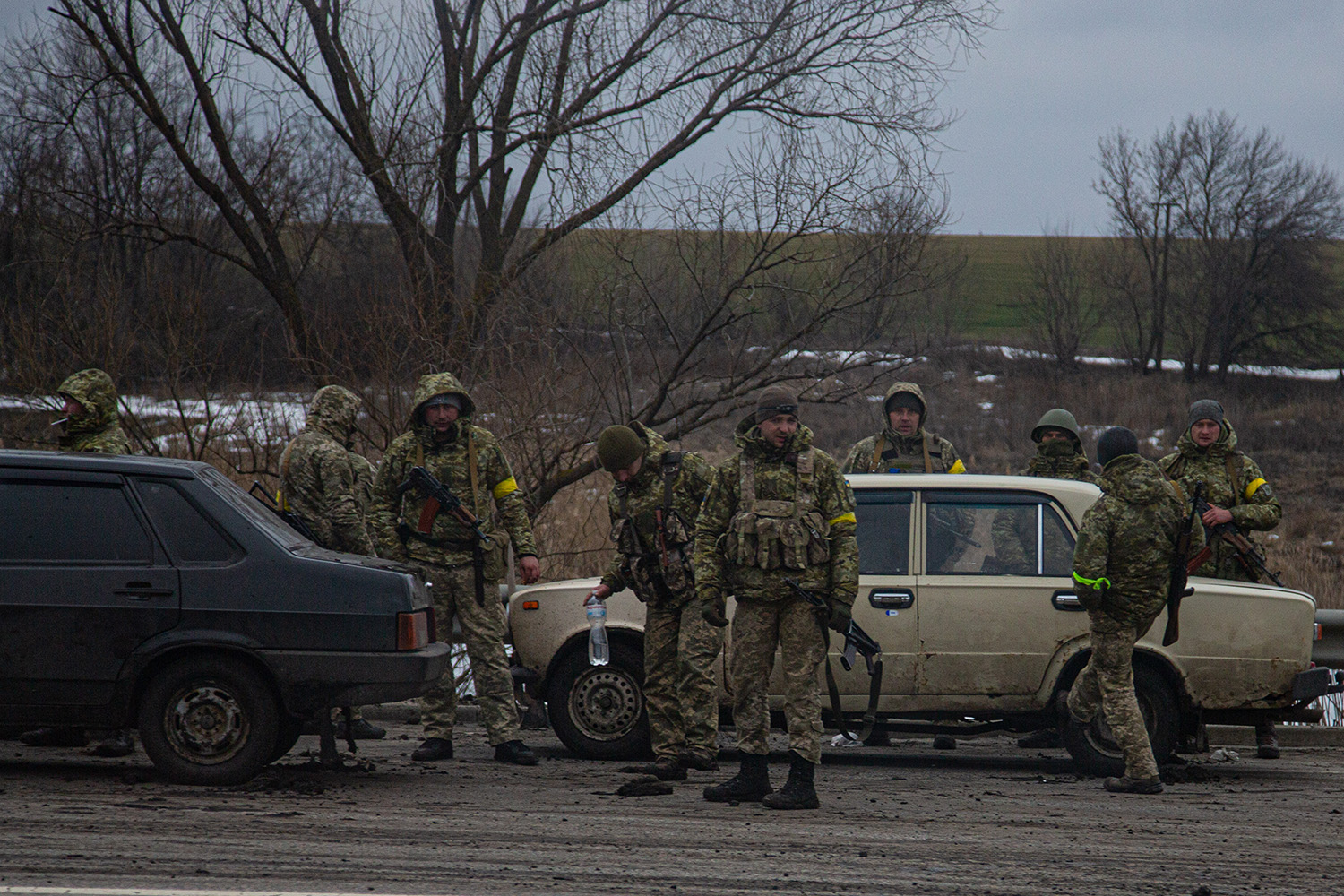 Ukrainian militia members, recently enrolled in the country’s defense, stand by their vehicles on the highway to Dnipro, Ukraine, on Feb. 28. Jack Losh for Foreign Policy

Civilian militia members were gathered by their sedans and family cars on a desolate stretch of highway. Grasping newly acquired assault rifles, they nervily checked papers at hastily assembled checkpoints on the road to Dnipro—one of the few large cities to be spared strikes by Russian bombs.

On its outskirts, huge traffic jams stretched back as people fleeing violence in the north converged on the city, an uneasy refuge for Ukrainians, at least for now.