Kyiv is running low on supplies.

Welcome back to Foreign Policy’s SitRep! Jack here today, covering for Robbie as he takes a much deserved break in the Florida Keys. With everything that has happened in the past two weeks, you’re probably in need of a timeline cleanse, so here’s a picture of an adorable puppy following U.S. troops in Poland.

Alright, here’s what’s on tap for the day: Russia is tightening its military grip on Ukraine despite early stumbles, the Pentagon is keeping one eye on North Korea’s ballistic missile launches, and the Kremlin’s diplomats are trying to derail the emerging Iran nuclear deal.

Welcome back to Foreign Policy’s SitRep! Jack here today, covering for Robbie as he takes a much deserved break in the Florida Keys. With everything that has happened in the past two weeks, you’re probably in need of a timeline cleanse, so here’s a picture of an adorable puppy following U.S. troops in Poland.

Alright, here’s what’s on tap for the day: Russia is tightening its military grip on Ukraine despite early stumbles, the Pentagon is keeping one eye on North Korea’s ballistic missile launches, and the Kremlin’s diplomats are trying to derail the emerging Iran nuclear deal.

Russia’s renewed invasion of Ukraine has been plagued by basic missteps that most Western officials and experts did not anticipate from a supposed world-class military: confused Russian conscripts getting lost, mass surrenders of units, problems with simple maintenance on tanks and tracked vehicles, and a stiffer-than-expected Ukrainian resistance that has managed to help stall a miles-long convoy north of Kyiv.

But for everything that has gone wrong for Russia, the Kremlin has begun to savagely tighten its grip on Ukraine this week, shelling civilian targets, including a maternity ward in the port city of Mariupol, almost at will. And Russian attackers have increasingly turned their eye on the capital of Kyiv, with a new line of northeastern advance, about 40 miles to the east.

“The overall assessment is that they’re doing a great job on holding out on Kyiv, but they would not be able to hold out forever,” a European diplomat speaking on condition of anonymity to speak candidly about the military situation told SitRep earlier this week. “The Russians will probably be able to encircle Kyiv in a week.”

Kyiv’s mayor, the former heavyweight boxing champion Vitali Klitschko, told CNN this week that the city of 2.8 million people only has enough supplies to hold out for another two weeks. The European diplomat estimated it could take Russia another month to take the city.

Yet with Russian President Vladimir Putin already committing nearly all of the 190,000 troops who were arrayed on the border in recent months into the war on Ukraine, misgivings about the full-scale invasion of Ukraine—which has already killed thousands of Russian troops and at least three top generals—have only grown.

The Russian army “didn’t think the full-scale invasion strategy was a good one,” the European diplomat said. “Because, as we’re all seeing, they can’t actually do it as well as they thought.” The doubts include the quality of Russian conscripts and actually putting the right battalions in the right places.

Western diplomats have stopped short of saying that the frustration with Putin’s desire for all-out war in Ukraine has crystallized into opposition to the longtime Russian leader. But the Russian army was “very upset” about the death in Ukraine last week of Andrey Sukhovetsky, a two-star commander who had been decorated for his role in the fighting in Crimea eight years ago. “The original intention was not to announce the death,” the European diplomat said. But Ukraine beat them to the punch.

Meanwhile, Ukrainians are digging mass graves in the port city of Mariupol after the Russian bombing of a maternity ward on Wednesday, and top U.S. officials—including Vice President Kamala Harris, who is traveling to Poland and Romania this week—have embraced the prospect of a war crimes probe against Russia. And even as Russian forces tighten their grip, Western officials, such as CIA Director Bill Burns, have suggested that the economic pressure will keep coming from the United States and Europe.

Not now, Kim. The U.S. Defense Department is stepping up intelligence collection on North Korea after a series of ballistic missile launches in recent days, U.S. Indo-Pacific Command announced on Wednesday. In a statement, the command said it had “enhanced readiness” of ballistic missile defenses and stepped up intelligence, surveillance, and reconnaissance activities in the Yellow Sea, which sits between China and the Korean Peninsula.

Bargaining chip. The Biden administration has cut off almost all sensitive diplomacy with Russia over its renewed invasion of Ukraine, except for a few things, including the (nearly finished) talks on a new Iran nuclear deal. But the Kremlin is stalling at the last minute, our colleague Colum Lynch reports, over a possible trade exemption for Tehran from destructive Western sanctions on Moscow. While experts see this as a leverage ploy by Russia to torpedo Biden’s foreign-policy agenda, it may not be fatal. “The funny thing about this Russian action is that it has managed to unite the United States and Iran,” one nonproliferation expert told Lynch.

Caracas confab. In a bid to isolate Russia, senior White House and State Department officials traveled to Venezuela, which has been battered by U.S. sanctions over the past five years for President Nicolás Maduro’s increasingly authoritarian tactics, including brutal crackdowns on opposition demonstrators. Now, Maduro, who freed two American prisoners in a goodwill gesture, wants the Biden team to return the favor and begin unwinding sanctions that the United States first imposed in 2017 to push his regime toward the exits. 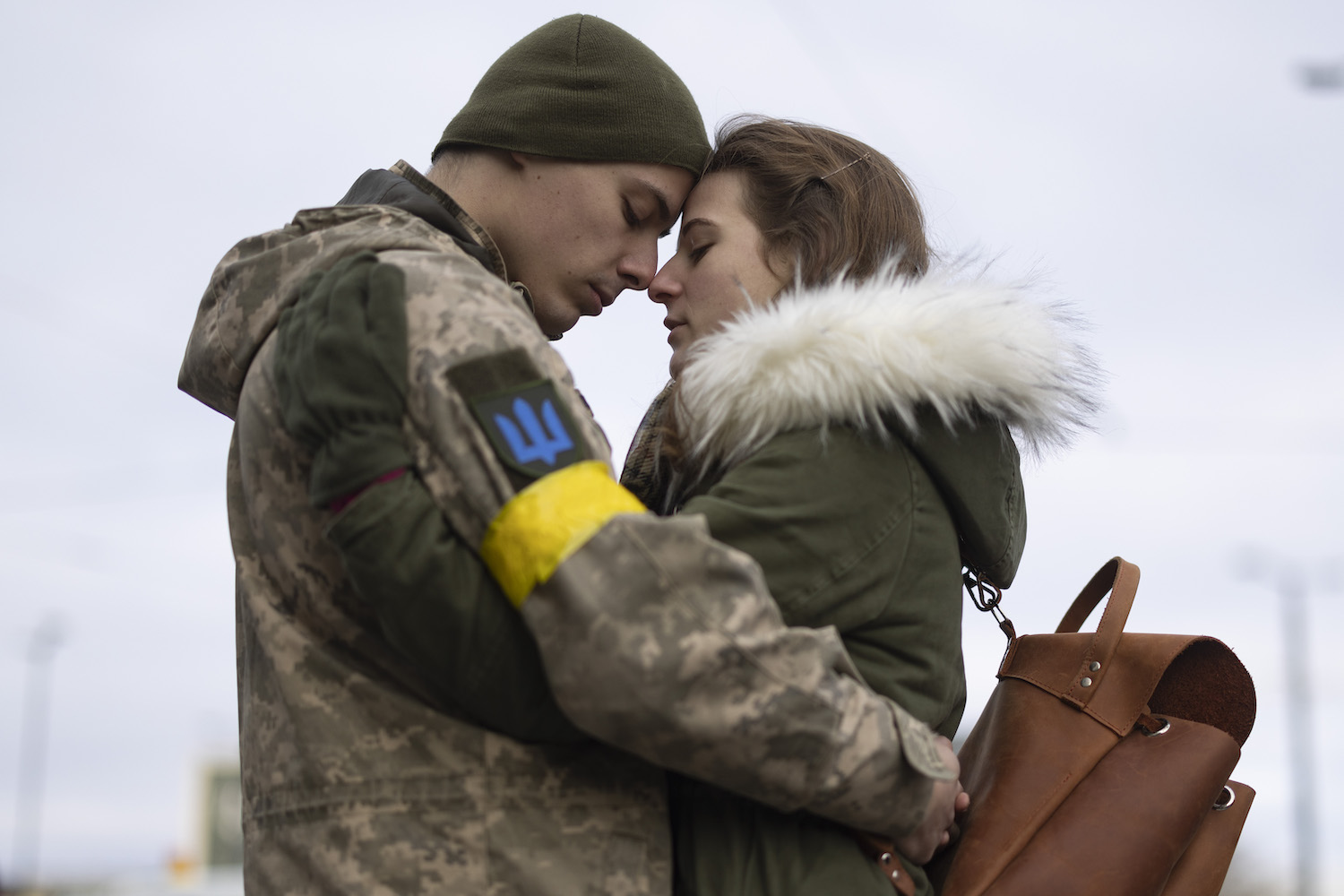 Vladimir Golyadynets says goodbye to his partner, Olga Shmigal, before boarding a train to Dnipro from the main train terminal in Lviv, Ukraine, on March 9. As Ukrainian civilians in the east flee to the relative safety of western cities such as Lviv and abroad to escape Russia’s assault, many military personnel are heading east to help with the war effort.Dan Kitwood/Getty Images

Russian Foreign Minister Sergey Lavrov, traveling to Turkey on Thursday, was challenged by a CNBC journalist after the brutal shelling of a maternity ward in Mariupol, Ukraine, on March 9, which Ukrainian officials said left hundreds of people—including children—trapped under the rubble. Lavrov’s answer left many officials and experts scratching their heads.

Reporter: Russia has used a lot of different words to justify the invasion of Ukraine. You’ve said that it’s for the Ukrainian people, but how can you possibly justify the bombing of a maternity ward and a children’s hospital? Do you agree with [Ukrainian President Volodymyr Zelensky] that to target pregnant mothers and children is in fact an atrocity and also for the Russian people themselves?

Lavrov: This is not the first time we have seen pathetic outcries concerning so-called atrocities by the Russian armed forces … at the U.N. Security Council. Our delegation presented the facts that this maternity hospital has long since been captured by the Azov battalion and other radical factions from where all expectant mothers, all nurses, and all personnel have been kicked out. This was a base of the ultra-radical Azov battalion.

Thursday, March 10: U.S. Vice President Kamala Harris is in Warsaw, Poland, for talks with the NATO ally after the Pentagon balked at a Polish deal to send Soviet-era fighter jets to Ukraine via a U.S. military base in Germany. She will also travel to NATO ally Romania.

Tuesday, March 15: The 11-year anniversary of the beginning of the Syrian uprising against President Bashar al-Assad.

“We are in a very challenging position where we are providing enormous amounts of support to Ukraine, as we should and need to do but, at the same time, trying not to escalate the conflict into a full-on NATO or U.S. war with Russia. That is a challenging space to manage.”

Movie time. There are few creature comforts for the thousands of Ukrainians stuck underground in Kyiv’s subways, which are serving as makeshift bomb shelters while Russian forces target the city. But Ukrainians have found creative ways to pass the time, with the city government starting a movie club. See for yourself.