Tensions over Ukraine war spill into the Arctic.

Welcome back to Foreign Policy’s SitRep, and happy St. Patrick’s Day! Unfortunately, this St. Patrick’s Day isn’t particularly lucky, as Irish leader Micheal Martin, visiting Washington to meet with U.S. leaders for the festivities, tested positive for COVID-19. So at your celebrations today, remember to toast to his speedy recovery.

Alright, here’s what’s on tap for the day: The United States and Canada look to exercise in the Arctic amid Russia tensions, Russia wants Chinese meal kits to feed its troops in Ukraine, and the Biden administration is considering lifting Iran’s feared military branch from U.S. terror lists.

Welcome back to Foreign Policy’s SitRep, and happy St. Patrick’s Day! Unfortunately, this St. Patrick’s Day isn’t particularly lucky, as Irish leader Micheal Martin, visiting Washington to meet with U.S. leaders for the festivities, tested positive for COVID-19. So at your celebrations today, remember to toast to his speedy recovery.

Alright, here’s what’s on tap for the day: The United States and Canada look to exercise in the Arctic amid Russia tensions, Russia wants Chinese meal kits to feed its troops in Ukraine, and the Biden administration is considering lifting Iran’s feared military branch from U.S. terror lists.

High Tensions in the Frozen North

Four years before the end of the Cold War, then-Soviet leader Mikhail Gorbachev declared the Arctic a “zone of peace.”

That moniker held up relatively well in the ensuing decades, even as relations between Russia and the West slowly deteriorated and climate change thawed Arctic ice, opening more of the region to human activity.

But Russia’s invasion of Ukraine risks upending all of that, melting away decades of efforts to demilitarize the region from the heyday of the Cold War and focus on scientific, economic, and trade cooperation.

The United States and Canada announced they’re planning new military exercises in the Arctic beginning this week to stress-test their aircraft that monitor the region and their missile defense capabilities.

Noble Defender. The semi-regular exercise, dubbed “Noble Defender,” was planned well before the Russian invasion of Ukraine. But it has taken on new importance amid the military conflict in Europe and Russian President Vladimir Putin’s not-so-subtle nuclear saber-rattling messages to countries seeking to help Ukraine.

One portion of the exercise will include Canadian CF-18 fighter jets intercepting other aircraft role-playing as adversaries in northern Canada. (Russian aircraft have a habit of probing the airspace of its neighbors and even buzzing aircraft of NATO allies in apparent shows of force.)

The exercise is aimed at sending a message of deterrence to Russia from its Western rivals that Washington and its allies would be ready for any spillover of tensions in Europe into the high north.

Cold shoulder. Russia has one of the longest northern coastlines of any Arctic littoral state and views the region as a potential cash cow for vast untapped energy resources. At the same time, it has expanded its military infrastructure and presence in the Arctic in recent years, drawing concern from the United States and its fellow NATO allies: Norway, Denmark, and Canada.

Russia’s war in Ukraine has already altered Arctic diplomacy. The regional body overseeing the region’s governance, the Arctic Council, was thrown into upheaval over Putin’s invasion when the group’s seven other countries—Canada, Finland, Denmark, the United States, Iceland, Norway, and Sweden—announced they would be boycotting future Arctic Council meetings in Russia. (Russia currently holds the organization’s rotating presidency.)

Dust off the Cold War playbook? Arctic security experts, meanwhile, are calling on Canada and the United States to upgrade aging northern early warning radar and air defense systems that the North American Aerospace Defense (NORAD) Command has overseen since the 1950s.

Brig. Gen. Derek O’Malley, deputy commander for the Canadian NORAD region, told CBC that he expected new investments in NORAD infrastructure in the near future. “Equipment gets old, but right now, your defenses are very capable and they’re doing the job,” he said. “I also have confidence that there’s going to be some significant investments in the future that will make us even stronger.”

The CIA has tapped veteran cybersecurity leader La’Naia Jones to be its new chief information officer, the Record reports.

Mealtime. Russia has asked China for help in its war in Ukraine, the Financial Times first reported this week. Among the requests are pre-packed meal kits known as “meals, ready-to-eat” (MREs).

The request underlines the logistical problems that Russia has faced in its three-week war, experts said, despite a monthslong buildup of troops in Belarus, Russia, and Ukraine’s pro-Russian separatist provinces. YouTube reviews rank China’s MREs as “substandard” and among the “worst quality rations for a large military in the world.”

Sagging morale. Russia has already lost more than 7,000 soldiers in Ukraine, more troops than the number of U.S. forces killed in over 20 years of fighting in Iraq and Afghanistan combined, according to conservative U.S. intelligence estimates obtained by the New York Times.

That is contributing to declining morale among well over 150,000 Russian troops who have been deployed into Ukraine, according to the report. A recent U.S. intelligence finding described Russian troops “just parking their vehicles and walking off into the woods.”

Clean slate. The Biden administration is considering removing Iran’s Islamic Revolutionary Guard Corps from the U.S. terror blacklist amid ongoing nuclear negotiations in exchange for a commitment to de-escalate tensions in the region, Axios reports. The move, which would reverse a decision under former U.S. President Donald Trump, would likely generate uproar from both Republicans and hawkish Democrats as Iran nuclear deal negotiations enter their final stage. 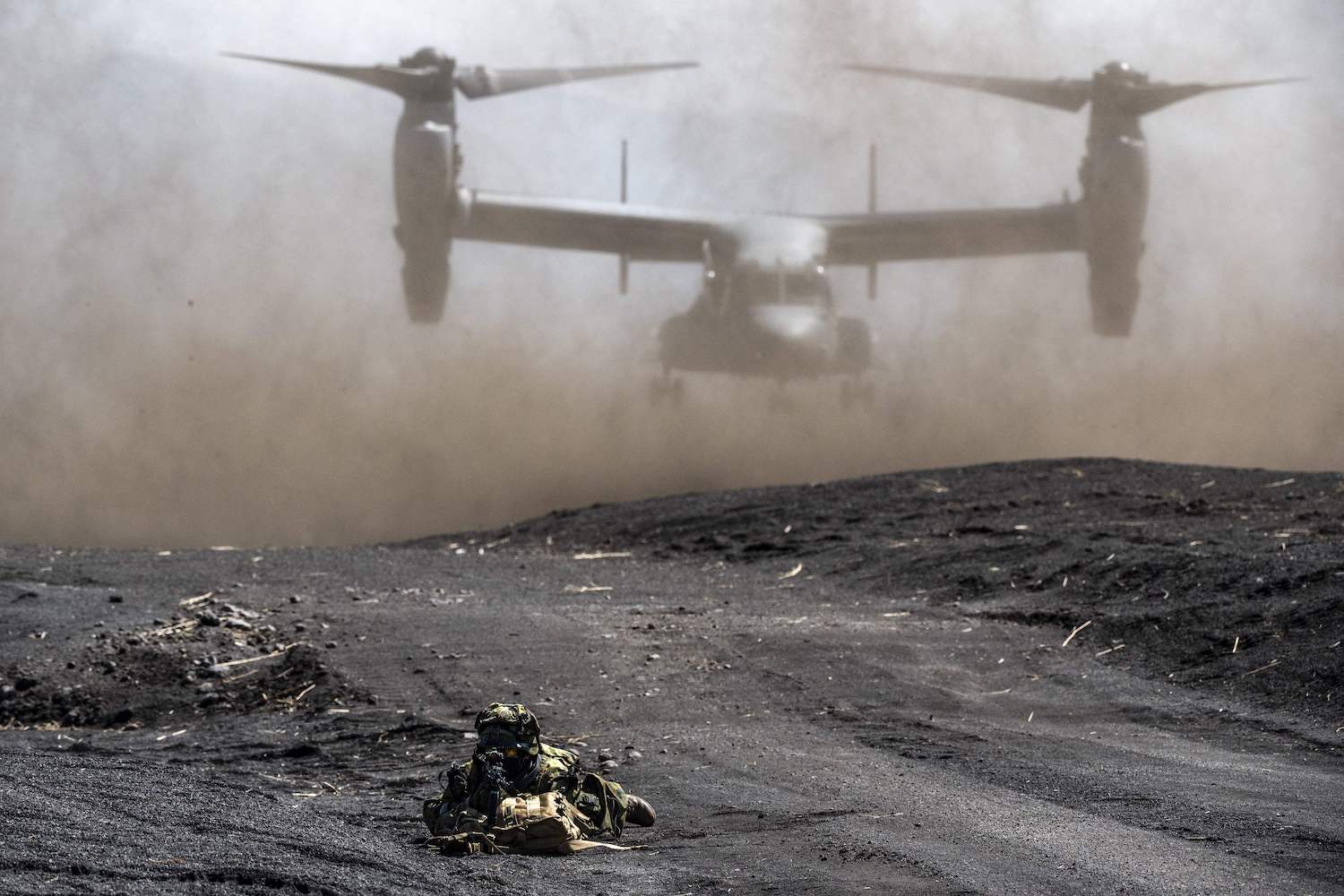 A plane takes off behind a person lying on the ground with military gear.

A member of the Japan Self-Defense Forces holds their position while a U.S. Marine Corps MV-22 Osprey aircraft takes off during a joint U.S.-Japan military exercise near Gotemba, Japan, on March 15.CHARLY TRIBALLEAU/AFP via Getty Images

—Official statement from Alexandra Chyczij, president of the Ukrainian Canadian Congress, after learning this week that Russia was sanctioning the group.

Dogs of war. A 2-year-old dog nicknamed Patron, meaning “bullet” in Ukrainian, has become a bomb-sniffing asset to troops dealing with unexploded Russian ordnance in Chernihiv, which U.S. defense officials have said is “isolated” by Russian troops. “The dog is the soul and mascot of Chernihiv pyrotechnicians,” the publication UkraineWorld tweeted.

You are commenting as . Change your username | Log out
Tags: Arctic and Antarctic, Military, U.S. Military