Hundreds of employees at the World Food Program protest the dominant role of men in responding to world’s humanitarian emergencies.

“The @WFP team in #Lviv #Ukraine,” the tweet, which was posted on Tuesday, said. “Dedicated and committed to support the civilians affected by the war.”‘

“The @WFP team in #Lviv #Ukraine,” the tweet, which was posted on Tuesday, said. “Dedicated and committed to support the civilians affected by the war.”‘

Kern’s tweet—which featured a photograph of Beasley, a former South Carolina governor who serves as WFP’s executive director, along with nine other male employees—seemed to anticipate what would come next, acknowledging that the “gender balance is not there yet. Female colleagues are being deployed in the next days.” 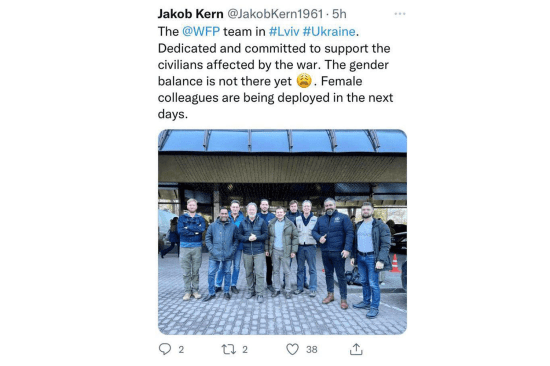 But those assurances were not sufficient to forestall a coming protest from the Rome-based agency’s female staff. In a March 16 letter to Beasley and his top management team signed by more than 250 employees, most of them women, the staffers made it clear they believe the agency has fallen short of its frequent pledges to promote greater gender equality and diversity.

“We are writing this in response to a Twitter post with a photo of the all-male and mostly white WFP Lviv team surrounding our Executive Director,” said the letter, which was obtained by Foreign Policy. “The limited gender balance and diversity in the Ukraine crisis operations had already been noticed among WFP staff and flagged on social media. The Tweet sparked disappointment in many of us at WFP, both women and men.”

“To us, it reflects the entrenched problem that WFP still is in essence a mainly white, male-dominated club, particularly in emergencies,” the WFP employees added.

The letter comes at a time when the global food agency is facing one of the greatest humanitarian and food crises in Europe since World War II as Russian forces bombard Ukraine’s cities, driving more than 3 million people across the border into Poland, Romania, and Moldova for safety.

On Thursday, Foreign Policy reported that the U.N. Secretary-General António Guterres had decided to extend Beasley’s term, which was scheduled to end next month, for another year in order to avoid a leadership transition in the face of the worst food crises in generations. The United States, which provides the majority of WFP’s funds, has endorsed the decision,  according to two diplomatic sources.

In their letter, the WFP staffers said they wanted to “acknowledge the tremendous work of our colleagues, women and men, who are setting up the massive operation in Ukraine and surrounding countries. Secondly, we fully realize that senior leadership is dealing with difficult decisions to get a major operation up and running, in very difficult circumstances. We wouldn’t raise this issue now if we didn’t think it was of critical importance to WFP.”

The authors of the letter included a few observations from staffers at the U.N. food agency. “It felt like a stab,” said one unidentified WFP staffer. “I know several people in the picture and truly appreciate how they work. But seeing them standing there for the shot smiling, not realizing what it meant, felt like a betrayal.”

“I looked at the picture and realized that despite working hard, being as qualified and experienced as almost any man, I couldn’t see a future for myself at this organization,” added another.

A spokesperson for WFP, Gregory Barrow, declined to make Kern available for an interview on the tweet or the protest. The tweet has since been deleted.

But Barrow sent figures indicating that while the food agency had not reached gender parity in its workforce during Beasley’s term, it has improved. As of February 2022, nearly 42 percent of WFP’s 21,830 employees were women, compared with 33.9 percent in April 2017, according to the figures Barrow provided. The WFP doesn’t track the racial composition of its workforce, but the spokesperson stated that some 18,218 WFP workers are nationals from the developing world.

“Achieving gender parity is something that WFP’s Executive Director has invested in personally and from a corporate perspective during his term and that is reflected in the positive trend we are seeing in the statistics,” Barrow told Foreign Policy in a text message. “That does not mean that WFP has reached the end point in this journey and there is a clear recognition among managers that more can still be done.”

“The gender balance of the deployment in the current Ukraine response is actually a good example of an operation where half of the senior management leading WFP’s teams on the ground are women and this is something that the Executive Director pays close attention to,” he added.

The staff letter appealed to WFP’s leadership to issue a comprehensive report breaking down the gender, nationality, and rank of staffers deployed in Ukraine and explaining how they were selected.

“We are calling out WFP leadership on this not for the sake of it, but because we truly care about this organization, the values it embodies and about its future,” the letter stated. “The problem is real, and we hope that it will not just be covered up with new posts or images showing diversity and gender balance now, as this would be a bit too late and not sufficient.”

You are commenting as . Change your username | Log out
Tags: Foreign Aid, Russia, Ukraine, United Nations

NEW FOR SUBSCRIBERS: Want to read more on this topic or region? Click + to receive email alerts when new stories are published on United Nations, Russia

U.N. to Keep Beasley at WFP as Food Crises Roil the World

The head of the United Nations’ top food agency will get a job extension now that Russia’s invasion has put food security at risk for millions.

Is the US Military Capable of Learning From the War in Ukraine?

At some U.S. missions abroad, diplomats are banned from bringing breast pumps into their offices.

It’s not fear of escalation. It’s fear of being too late.