Alliance leaders stressed none of its forces would be deployed into Ukraine to prevent the conflict’s spread.

Welcome back to Foreign Policy’s SitRep! First off, take a moment to read about the life and legacy of Madeleine Albright, the first woman to be U.S. secretary of state, who died on Wednesday at the age of 84. Then take another moment to read up on her legendary brooch collection.

Alright, here’s what’s on tap for the day: NATO deploys new battle groups to eastern flank, the U.S. Embassy in Ukraine’s local employees are feeling abandoned by the U.S. State Department, and the Taliban are cracking down on Afghanistan’s few remaining freedoms.

Welcome back to Foreign Policy’s SitRep! First off, take a moment to read about the life and legacy of Madeleine Albright, the first woman to be U.S. secretary of state, who died on Wednesday at the age of 84. Then take another moment to read up on her legendary brooch collection.

Alright, here’s what’s on tap for the day: NATO deploys new battle groups to eastern flank, the U.S. Embassy in Ukraine’s local employees are feeling abandoned by the U.S. State Department, and the Taliban are cracking down on Afghanistan’s few remaining freedoms.

NATO is deploying four new battle groups to its eastern allies to bolster deterrence against Russia as its invasion of Ukraine enters its second month.

The battle groups will be deployed to Slovakia, Hungary, Romania, and Bulgaria in a new and largely unprecedented deployment to the Black Sea region, where Russian naval and amphibious forces are targeting key southern Ukrainian ports.

The announcement came ahead of a major NATO summit in Brussels on Thursday, where U.S. President Joe Biden and other NATO leaders convened to discuss how to shore up the alliance’s eastern flank, ramp up pressure and economic punishment on Russia, and discuss ways to respond to any Russian escalation in the conflict.

More boots on more ground. So far, NATO has been light on details about the battle groups, including the number of troops and types of forces it will be deploying. NATO already has battle groups deployed in Poland, Lithuania, Latvia, and Estonia.

But the latest announcement appears to indicate a change in how NATO military planners are looking at its eastern flank. NATO appears to be “starting to shift away from this posture of deterrence by tripwire to deterrence by forward defense,” said Lauren Speranza, an expert on security issues at the Center for European Policy Analysis. “This is an overdue move to try and rebalance NATO’s force posture to make sure the alliance’s southeastern flank is reinforced in the same way the northeastern part is.”

A senior U.S. official told reporters on Thursday that there are now 40,000 NATO forces under the alliance’s direct command focused on the eastern flank amid Russia’s invasion of Ukraine. NATO also has a task force focused on countering chemical and biological weapons that is ready to deploy should NATO Supreme Allied Commander Gen. Tod Wolters order it.

On the naval front, the senior official said Washington was consulting with allies on plans to supply Ukraine with anti-ship missile systems as well, a move that could help Ukraine target Russian naval and amphibious forces in the Black Sea.

“There may be some technical challenges with making that happen, but that is something that we are consulting with allies and starting to work on,” the official said.

Is Ukraine just Putin’s first stop? The announcement of the battle groups also comes as top Ukrainian leaders issue new warnings that Russian President Vladimir Putin’s military plans are not likely to end in Ukraine. In a pre-recorded speech posted to his Telegram account last night, Ukrainian President Volodymyr Zelensky said the monthlong invasion was “only the beginning” of Putin’s plan “to defeat the freedom of all people in Europe.”

While NATO leaders have made clear the bloc has no plans to deploy any troops to Ukraine, lest that spiral into a full NATO-Russia conflict, they have also said any Russian incursion into NATO territory will invite a swift response.

And on the economic front. More pain, less gain for the oligarchic elites that shore up Putin’s power. Ahead of the summit on Thursday, the White House announced a new wave of sanctions against Russian elites and members of the State Duma, Russia’s legislative branch, as well as major Russian defense industry firms.

Two key nominees for top State Department posts were all set to be voted out of the Senate Foreign Relations Committee yesterday, but those votes were delayed by at least a week, a senior Senate aide confirmed to SitRep. The votes for Barbara Leaf to be assistant secretary of state for Near Eastern affairs and Deborah Lipstadt to be the special envoy for combatting antisemitism have been stuck in the committee for months.

Erin Simpson was sworn in on Monday as a senior advisor for industrial base policy at the U.S. Defense Department, she announced on Twitter. Simpson was previously a director in Northrop Grumman’s space systems division.

Fun fact: Simpson is the second member of the amazing and, sadly, now-defunct Bombshell podcast by War on the Rocks (RIP from two former fans of the show) to enter Biden’s Defense Department, after Radha Iyengar Plumb, chief of staff to Kathleen Hicks, the Pentagon’s No. 2 official.

About that whole Taiwan thing… Two scholars at the German Marshall Fund (GMF) released a sweeping new report on a massive pressure campaign by China to coerce international organizations and even U.S.-based think tanks into altering their language and references to Taiwan in conferences and studies. (China claims Taiwan, an independently governed democracy, as its own territory.)

GMF report authors Bonnie Glaser and Jessica Drun list examples, including an instance when the Nuclear Threat Initiative and the Stimson Center “bowed to [Chinese] pressure” on how they reference Taiwan on their websites “to avoid being barred from participation in U.N. conferences and losing access to the U.N. and its affiliated agencies, which are essential to their work.” Read the full report here.

Feeling abandoned. Nearly 600 Ukrainian citizens worked at the U.S. Embassy in Kyiv, Ukraine’s capital, before Russia’s invasion of Ukraine—some for decades. But while U.S. diplomats withdrew from Kyiv, these local employees were left behind.

They’ve sent urgent letters to the State Department pleading for help and accusing Washington of backtracking on pledges to support them, as we reported. Biden’s top envoy for Europe, Karen Donfried, sent a letter back to them, a copy of which FP obtained, urging those eligible to apply for special visas to the United States and casting uncertainty about long-term support for them.

Bad to worse. Meanwhile, the Biden administration seems to have moved on from that other foreign-policy crisis—Afghanistan—and the Taliban are taking the opportunity to go, well, full Taliban. That’s according to FP columnist Lynne O’Donnell, who was on the ground in Kabul almost until the last U.S. military planes took off back in August 2021.

The militant group running the country has beaten and detained dozens of journalists and shut down media organizations to keep their arbitrary arrests and extrajudicial killings under wraps. And the Taliban have also backtracked on a promise to let girls keep going to school, one major accomplishment of the 20-year U.S. and NATO military mission. 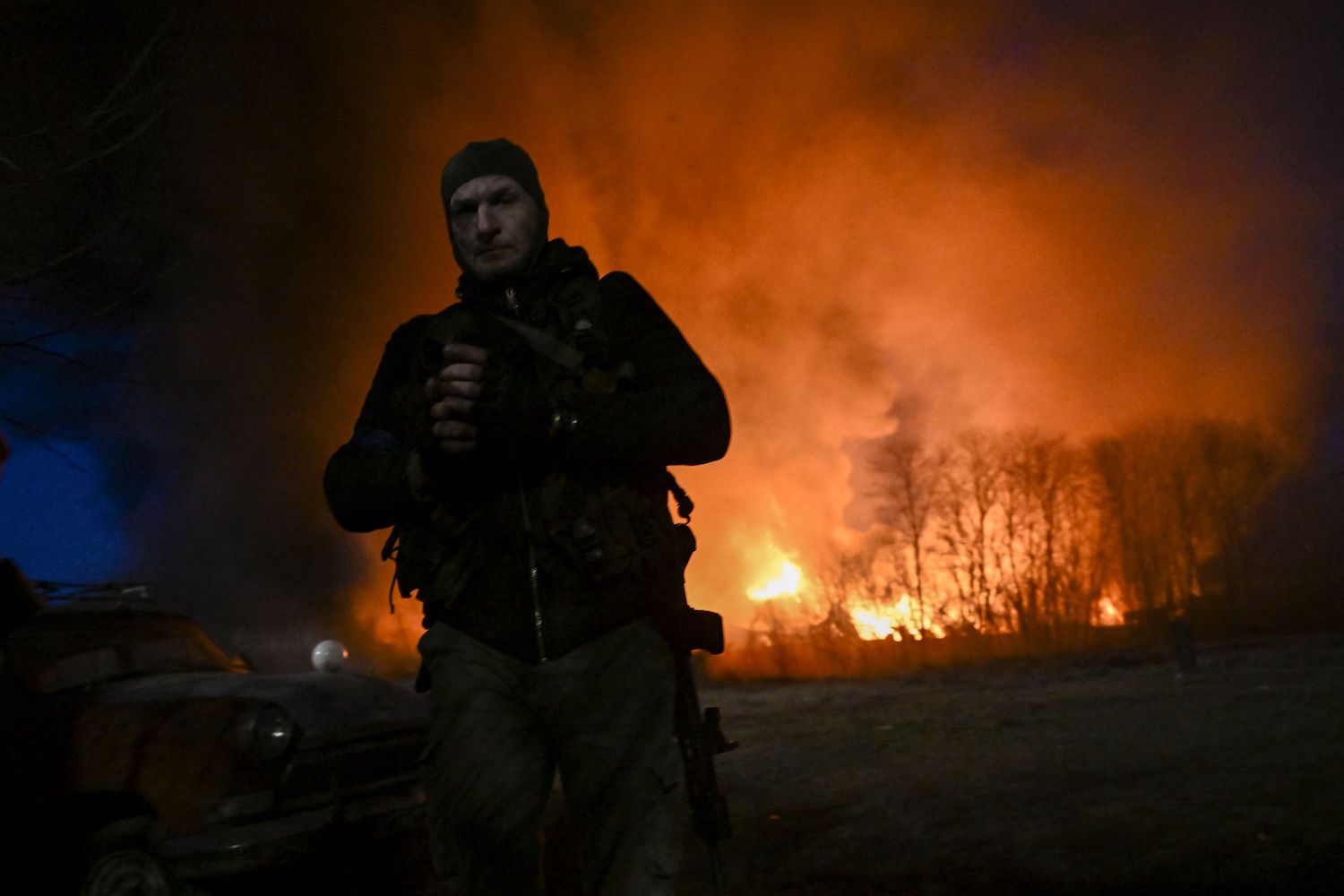 A Ukrainian serviceman looks on as he stands in front of a burning warehouse after Russian shelling in Kyiv, Ukraine, on March 17.ARIS MESSINIS/AFP via Getty Images)

Saturday, March 26: U.S. Secretary of State Antony Blinken begins a five-day tour of the Middle East and North Africa, with scheduled stops in Israel, the West Bank, Algeria, and Morocco.

Saturday, March 26: New U.S. sanctions on Russian banks are set to take effect in another blow to Moscow’s beleaguered economy.

Monday, March 28: Biden is set to send his new budget to Congress, which reportedly includes more than $813 billion in national security spending.

“9 years. Well, as the characters of my favorite TV series The Wire used to say: ‘You only do two days. That’s the day you go in and the day you come out.’ I even had a T-shirt with this slogan, but the prison authorities confiscated it, considering the signature extremist.”

—Russian opposition leader Alexey Navalny reacts on Tuesday to the Kremlin extending his jail time in maximum security prison on trumped-up charges. Navalny accused Putin of poisoning him with a Novichok nerve agent in August 2020.

Russian trees get the ax. Poland has won the European Tree of the Year contest after Russia’s entry, a nearly 200-year-old oak tree apparently planted by novelist Ivan Turgenev, was disqualified over Putin’s invasion of Ukraine.

You are commenting as . Change your username | Log out
Tags: Eastern Europe, Europe, NATO, War