The highlights this week: popular Uruguayan President Luis Lacalle Pou faces a referendum on his presidency and legacy, Chile’s Oscar nominee showcases unconventional animation techniques, and Jamaica decides to break it off with the queen.

The highlights this week: popular Uruguayan President Luis Lacalle Pou faces a referendum on his presidency and legacy, Chile’s Oscar nominee showcases unconventional animation techniques, and Jamaica decides to break it off with the queen.

When conservative Uruguayan President Luis Lacalle Pou came into office in March 2020, he took a dramatic step to enact his legislative agenda. In a move promised during his campaign, Lacalle Pou bundled 476 legal changes on everything from crime to education to price controls into an omnibus bill that he classified as urgent, requiring a vote in congress within 90 days. With his legislative coalition in the majority, the bill—known by its acronym LUC, for Law of Urgent Consideration—quickly passed.

Now, the country’s opposition parties and unions have taken a similarly dramatic countermeasure: with a massive petition finalized last July, they triggered a referendum to repeal 135 provisions of the LUC that its opponents found especially contentious. The vote will be held on Sunday. For months, campaigners for and against the repeal have been giving speeches in public plazas and on radio and television stations across the country.

If this political drama seems low-key, so goes it in Uruguay, which is consistently ranked as the highest–quality democracy in Latin America.

Among the issues at stake in the referendum are security reforms that make up part of Lacalle Pou’s tough-on-crime agenda: new legal protections for police who kill in self-defense, longer maximum jail penalties for adolescents who commit some crimes, and restrictions on the use of public space that could inhibit protests.

Uruguay is no stranger to referendums. Lacalle Pou’s father lost a referendum on a plan to privatize state companies when he was president of the country in 1992. In the past, however, the country’s referendums have usually focused on one issue rather than such a large raft. “The two sides have treated this like a plebiscite on the government,” Universidad de la República political scientist Daniel Chasquetti told En Perspectiva radio.

Polls show that the 135 LUC articles in question will likely survive the referendum, which makes sense considering Lacalle Pou’s approval rating, recently measured at 52 percent (versus 28 percent disapproval). That’s towering popularity for a Latin American leader in the COVID-19 pandemic era, earned in part through Uruguay’s quick procurement of vaccines. Many Uruguayans also praise Lacalle Pou for not shutting down the economy as severely as in neighboring countries, such as in Argentina and Ecuador. During his tenure, crime rates have fallen and the government has enacted new policies to attract expat workers.

All said, Lacalle Pou is the rare Latin American incumbent who has shone during the pandemic.

But in recent weeks, international price shocks caused by the war in Ukraine appear like they might dent his popularity. Surveys show the number of voters who want to repeal the LUC provisions has inched up in recent weeks; in a poll conducted by Opción Consultores published on Wednesday, 38 percent of voters said they would keep the provisions, 35 percent would revoke them, and a hefty 22 percent of voters said they were still undecided.

“As the [referendum] campaign has developed, some things have changed—among them, some economic variables,” Chasquetti pointed out. “Gas prices, inflation.”

One of the LUC provisions on the ballot makes it harder for the state oil company to control domestic oil prices by requiring regular adjustments pegged to the international market. Repealing this measure could look newly attractive to voters struggling to fill up their car tanks. Indeed, even Lacalle Pou’s government avoided fully implementing the new scheme during Uruguay’s pandemic slump—hesitancy that continues as the country faces high oil prices.

Lacalle Pou’s conservative party coalition came together during the presidential election of late 2019, and a strong vote to uphold the 135 LUC articles could consolidate it as a political force, pollster Rafael Porzecanski told news site La Diaria. A loss, he said, could inspire the country’s left to try to hold even more referendums before the 2024 presidential and legislative elections, such as a vote to challenge major pension reform Lacalle Pou hopes to carry out.

Sunday, March 27: Uruguay holds referendum on 135 articles of the LUC.

Thursday, March 31: The deadline for Brazilian public officials who plan to run for office in October’s general elections to leave their current positions. 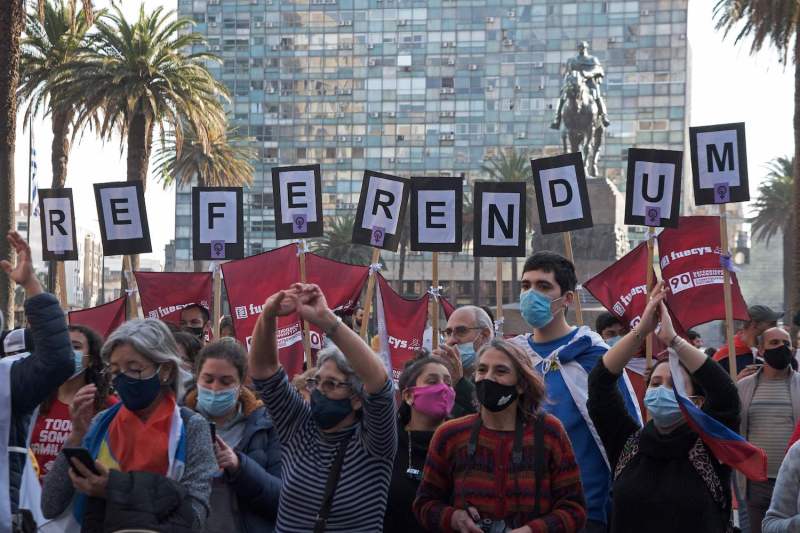 People cheer during a celebration after the number of signatures to call a referendum to repeal some portions of the Law of Urgent Consideration were achieved in Montevideo, Uruguay, on July 8, 2021.IGNACIO SANCHEZ MELLO/AFP via Getty Images

Jamaicans, however, wanted to change the subject. William and Kate were met with protests calling for reparations for slavery, and the two royals were told in a meeting with Jamaican Prime Minister Andrew Holness that the country plans to sever its ties with the crown and become a republic, as Barbados did last year.

Jamaica wants to address “unresolved issues,” Holness told the couple. Then, it will be “moving on.”

Verbal attacks on the poor quality of vote-counting from both Colombia’s left and right suggest candidates might challenge the results of May’s presidential elections, too.

Separately, Petro announced that environmental activist Francia Márquez will be his vice presidential nominee after her strong showing in the primaries. If elected, she would be Colombia’s first Black vice president.

View of dictatorship. One of the nominees for Best Animated Short Film at this weekend’s Academy Awards is the Chilean stop-motion picture Bestia, which focuses on the inner emotional life of Íngrid Olderock, a notorious torture overseer during the country’s military dictatorship. Olderock’s victims recounted she used her German Shepherd to brutalize political prisoners in the basement of a Santiago house during the 1970s.

In the film, which is based on a book by journalist Nancy Guzmán, Olderock and other characters appear as felt dolls with porcelain heads. Despite the opacity of the porcelain, Olderock’s emotions are explored in vivid detail through scenes from her dreams and everyday life as she interacts with her dog and visits the torture center—experiencing power, hate, dread, and isolation, in turn.

The film’s unusual visual style encourages a reexamination of long-standing injustices in the country. Olderock died a free woman well after the end of the dictatorship. Especially because she was never punished by the Chilean justice system, in committing her personal nightmares to the public record, the film is an important act of writing history, emphasizing Olderock’s lack of power and dignity. In a complex 15 minutes, it also shows why Chile’s animated film industry has quickly become one of the most internationally acclaimed in Latin America.

South Korean steelmaker Posco announced this week that it will invest $4 billion in a new lithium mining project in Argentina. Argentina is home to what percent of the world’s lithium reserves?

The project will be on an Argentine salt flat called Salar del Hombre Muerto. 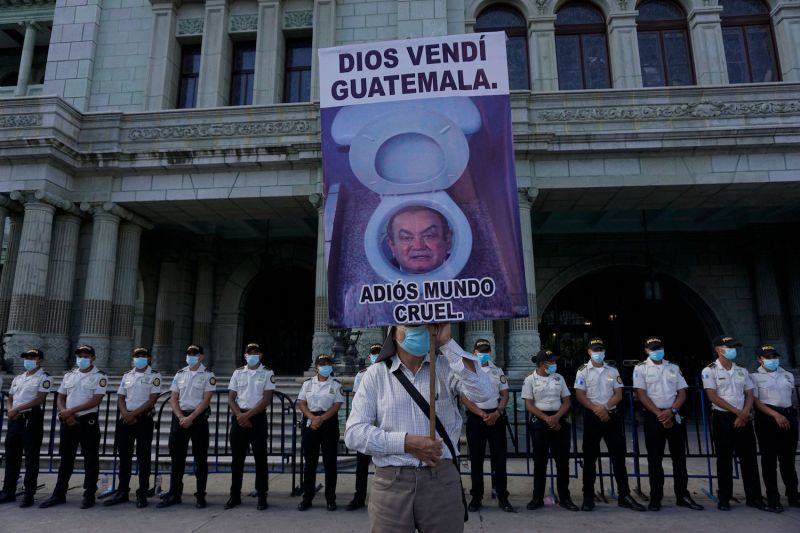 A woman holds a sign during a protest to demand the resignation of Guatemalan President Alejandro Giammattei and Attorney General María Consuelo Porras after Guatemala’s Special Prosecutor against Impunity Juan Francisco Sandoval was dismissed, at Constitution Square in Guatemala City on July 31, 2021.JOHAN ORDONEZ/AFP via Getty Images

In Washington, there is a growing community of Guatemalan legal officials exiled from their country due to government pushback against their anti-corruption work. That group added a high-profile new member this month: judge Erika Aifán, who submitted her resignation from Guatemala’s judiciary on Monday morning.

Aifán, who had been presiding over a court case in which a witness accused Guatemalan President Alejandro Giammattei of financing his 2019 campaign with $2.6 million in bribes from construction firms, told El Faro that she fled because she feared her life was in danger. In recent weeks, Guatemala’s Supreme Court was weighing whether to strip her of her judicial immunity in procedures that she criticized as irregular and politically motivated.

“There is no prison in Guatemala that would be safe for me,” she told El Faro.

For months, international watchdogs including the U.S. State Department had been voicing alarm about Aifán’s ability to do her work. Her exodus echoes that of top anti-corruption prosecutor Juan Francisco Sandoval, who is also now in Washington, last year. He said last month that at least 13 former Guatemalan legal workers have now sought refuge abroad.

“Intimidate and threaten until they are forced into exile. This is the strategy of Guatemalan elites to avoid investigations that could change the status quo, without the cost of resorting to violence or accumulating political prisoners,” the International Crisis Group’s Tiziano Breda tweeted.

Though the U.S. State Department says strengthening anti-corruption efforts is key to its strategy to stem migration from Central America, its own warnings against attacks on Aifán—and sanctions on Guatemalan officials for corruption—do not appear to be strengthening those efforts. Washington continues to cooperate with the Guatemalan government on other methods to reduce migration.

You are commenting as . Change your username | Log out
Tags: Economics, Elections, Security, Uruguay

NEW FOR SUBSCRIBERS: Want to read more on this topic or region? Click + to receive email alerts when new stories are published on Security, Economics