U.S.-Pakistan Ties Are Strained but Salvageable

Pakistan’s serious political crisis may be abating, thanks to a key Pakistan Supreme Court decision on Thursday. However, the future of Islamabad’s fragile relationship with Washington remains foggy after Pakistani Prime Minister Imran Khan leveled serious allegations against the United States, making it a central part of the crisis.

Last Sunday, Khan blocked a no-confidence vote that he likely would have lost, dissolved Parliament, and called for early elections. But on Thursday, the Supreme Court declared both moves unconstitutional. The no-confidence vote will go ahead on Saturday. Khan alleges the Biden administration colluded with his rivals on the motion, which the opposition brought about because of what they describe as the prime minister’s economic misgovernance. (U.S. officials have denied Khan’s allegations.)

Undeterred, Khan argued that the no-confidence motion was discredited because it was tied to a U.S. plot and violated Article 5 of Pakistan’s constitution, which emphasizes loyalty to the state. His allegation stems from a reported private exchange last month between a senior U.S. official and Asad Majeed Khan, Pakistan’s ambassador to Washington; Asad Majeed Khan conveyed to Islamabad that the U.S. official had expressed unhappiness about the prime minister and said U.S.-Pakistan relations would be better if he were removed in the no-confidence vote.

This sounds like a U.S. official complaining about the Pakistani prime minister, not plotting his ousting. But in Pakistan, public mistrust of the United States runs deep—in great part because there is a history of U.S. meddling in Pakistan’s internal politics. Khan’s allegations have hurt U.S.-Pakistan relations, especially after Khan publicly named the U.S. official on Sunday as Assistant Secretary of State for South Asia Donald Lu.

U.S.-Pakistan relations were unsettled before this political crisis. With the United States departing Afghanistan, the relationship is in search of a new anchor. Geopolitics have also imposed limits on bilateral ties, as each country deepens relations with the other’s top rival—Washington with New Delhi and Islamabad with Beijing.

With U.S.-China competition figuring so prominently in Washington’s foreign-policy calculations, there’s only so far it can go in pursuing a partnership with Beijing’s closet ally. Meanwhile, personalities are a constraint. Many top officials in the current White House—including U.S. President Joe Biden—served in the Obama administration during what was a low point for bilateral relations in 2011 and 2012. Memories of that period die hard.

Khan’s allegation of the United States orchestrating regime change will make it more difficult to rein in the unmoored relationship. But it’s not all bad news: Khan will likely lose Saturday’s no-confidence vote, meaning he and his party won’t lead Pakistan’s next government, which could help ease tensions.

Furthermore, military cooperation still has potential. Pakistan’s generals haven’t lost their desire for cordial relations with the United States, as evidenced by Pakistan Army Chief Gen. Qamar Javed Bajwa’s conciliatory comments in recent days. Washington often privileges its relations with Pakistani military leaders over civilian leaders, given that its army tends to drive foreign-policy decisions. There could be scope for future security cooperation, especially joint efforts to counter the threat of the Islamic State-Khorasan.

Additionally, existing collaborations in non-security spaces will go on as they have in the past amid the din of diplomatic tensions. Last week, the U.S. Agency for International Development announced a new initiative to provide safe drinking water in two provinces in Pakistan, and the U.S. Embassy announced a new partnership with a women’s university. On Tuesday, the U.S. Consulate General in Karachi, Pakistan, met with business leaders to discuss U.S. commercial cooperation.

People-to-people ties help such initiatives, serving as a reminder of the importance of cooperation outside official government channels. With Islamabad’s political crisis injecting fresh toxicity into the U.S.-Pakistan relationship, these exchanges are not only sanctuaries from government dysfunction but also a logical space for expanded cooperation.

Sri Lanka’s political crisis. Most of Sri Lanka’s cabinet—but not the prime minister—resigned en masse on Sunday, including the finance minister who was sworn in only one day earlier. The move likely aimed to mollify a public increasingly angry by the government’s inability to end an economic crisis that has led to food and fuel shortages in recent days.

Protests are spreading across Sri Lanka, and they haven’t been deterred by curfew orders from Colombo. Although most of the demonstrations are directed at the current government, some protesters are venting against a broader political class that they say has long failed to address the public’s basic needs.

The mass resignations leave beleaguered Sri Lankan President Gotabaya Rajapaksa and his brother Sri Lankan Prime Minister Mahinda Rajapaksa in a difficult bind. The strength of the protests is causing their legislative allies to turn against them: 41 ruling party lawmakers left the governing alliance this week, and others warn that an interim government is necessary to forestall political violence.

But a top opposition party has rejected any possible interim government, instead demanding that the president resign. On Wednesday, a government minister insisted he won’t step down. Sri Lanka’s growing political crisis could distract policymakers and further constrain efforts to address economic stress—causing protests to intensify and raising concerns about the government’s survival.

Their meeting highlights the delicate balance in U.S.-Bangladesh relations, as the Biden administration remains concerned about Dhaka’s democratic backsliding. Momen told journalists that he discussed Bangladesh’s electoral system with Blinken, which seems odd at first glance. But this detail suggests that Blinken may have pressed Momen to ensure that the country’s elections next year are free and fair. U.S. and other Western officials expressed concerns about irregularities in Bangladesh’s 2018 election.

Despite these tensions over rights and democracy, the trend lines for bilateral relations appear smooth. Momen’s visit occurred during a period of intense high-level engagement: Victoria Nuland, one of Blinken’s top deputies, visited Dhaka last week, and high-level security and business dialogues are planned for the coming days.

India condemns civilian killings in Ukraine. On Tuesday, Indian representative to the United Nations T.S. Tirumurti, speaking at the U.N. Security Council, condemned killings of civilians in Bucha, Ukraine. However, Tirumurti didn’t name Moscow explicitly—in line with previous Indian messaging that has offered criticism without linking it to Russian actions. For example, India has repeatedly called for respect for the principles of territorial integrity and state sovereignty, but it hasn’t named Russia as violating these principles.

But U.S. pressure is building on India to stop doing business with Russia and take a strong stand against its invasion of Ukraine. Washington’s latest tactic is to warn New Delhi that Moscow isn’t a dependable security partner. These issues will make for a tough discussion at next week’s two-plus-two dialogue, when India’s foreign and defense ministers meet with their U.S. counterparts in Washington. 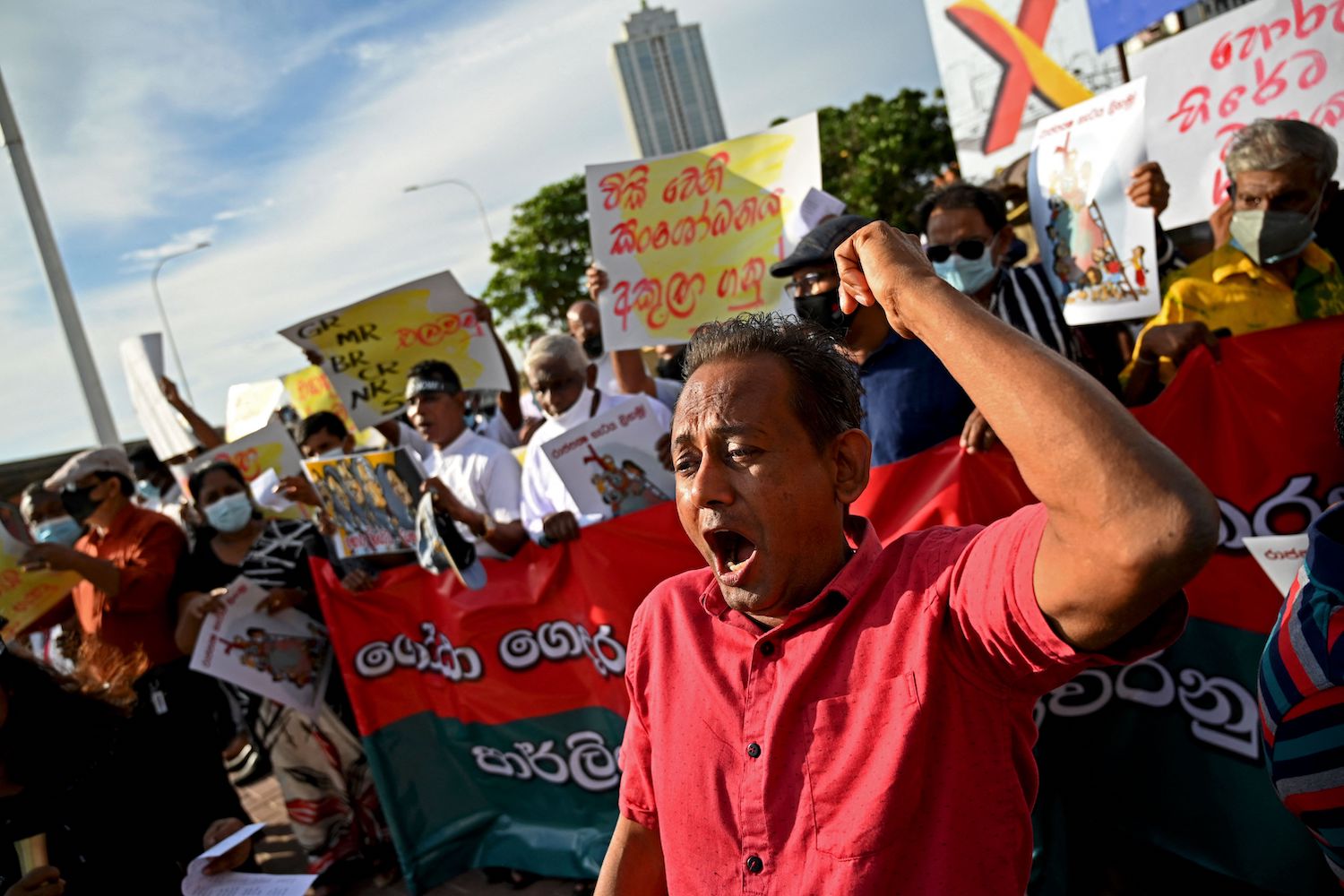 “They need to come to the streets and say, ‘We made bad decisions, but we hear you. We feel you. Let us come together and fix this problem.’ They’re not doing that.”

—Uttunga Jayawardana, a protester in Sri Lanka, referring to the government’s poor handling of the country’s economic crisis

On Monday, the U.S. Centers for Disease Control and Prevention (CDC) released its latest global COVID-19 threat assessment. It lists India and Nepal in the lowest risk category—a striking turnaround for the two South Asian countries hit hardest by COVID-19 with devastating surges last year. Pakistan, which has been praised by prominent observers for its handling of the pandemic, appears in the same category.

Bhutan, widely regarded as one of the world’s greatest pandemic success stories, appears in the category of very high risk. The country has vaccinated more than 90 percent of its 750,000 people and has had only nine COVID-19 deaths. But the CDC’s main criteria are the number of new cases over the past 28 days and the increase in daily case rate. This suggests, in the CDC’s view, that Bhutan is seeing increasing rates despite high vaccination.

In Indian Express, analyst Somit Dasgupta argues that New Delhi must reform tariff structures in its renewables sector to enable sustained increases in supply. “If we are serious about having a renewable generating capacity of 450-500 [gigawatts] by 2030, we need to create a proper environment and ensure adequate returns to invite fresh investments into renewable generation,” he writes.

Lawyer Benazir Jatoi, writing in the Express Tribune, reviews the current government’s record on women’s rights. She argues that despite some legislative achievements, it has done a “real disservice to women” in Pakistan with “the myopic and orthodox narrative it has crafted.” This narrative “will be difficult for society to [get] rid of,” she warns.

A Kuensel editorial laments how Bhutan has failed to properly care for its elderly population: “It is sad that our ageing population do not receive the due care, attention and support even after five decades of declaring that wellbeing should be considered more important than material growth,” it argues.

You are commenting as . Change your username | Log out
Tags: Foreign & Public Diplomacy, Pakistan, Politics

NEW FOR SUBSCRIBERS: Want to read more on this topic or region? Click + to receive email alerts when new stories are published on Foreign & Public Diplomacy, Politics