The End of Title 42 Doesn’t Mean Back to Normal

During the pandemic, Washington outsourced harsh migration management to its southern neighbors.

The highlights this week: Asylum processing is due to return at the U.S.-Mexico border, cost-of-living protests in Peru escalate, and why we all may have gotten Machu Picchu’s name wrong.

The highlights this week: Asylum processing is due to return at the U.S.-Mexico border, cost-of-living protests in Peru escalate, and why we all may have gotten Machu Picchu’s name wrong.

On April 1, the U.S. Centers for Disease Control and Prevention announced that a pandemic-era rule, implemented in March 2020, that restricted many migrants’ ability to seek asylum at the U.S.-Mexico border will be terminated on May 23.

Title 42, as the rule is known, allowed for the rapid expulsion of unauthorized migrants at the U.S. border on the grounds that they could spread COVID-19. Some human rights groups objected to the policy from the start, saying it could not override U.S. asylum law, which guarantees the right to seek protection in the United States. When Title 42 remained in place well after COVID-19 travel restrictions for other countries had been lifted, a chorus of claims grew that its true aim was to prevent migration from Latin America.

The Biden administration, which inherited Title 42 from the Trump administration, has been selectively applying the rule for some time. It has not expelled unaccompanied minors, for one. And after Mexico announced it would only take back some migrants—generally Guatemalans, Hondurans, and Salvadorans—U.S. authorities began accepting some of families with young children for asylum processing on what seemed like an ad hoc basis. Other migrants were flown back to countries including Ecuador, Colombia, and especially Haiti. The Biden administration has deported at least 20,000 people to the latter country since taking office. Most deportees were sent back to their home countries, while some Venezuelans were sent to third countries such as Colombia.

Now, beginning in late May, any asylum-seeker who arrives at the U.S.-Mexico border should have the right to an interview with an asylum officer. In a twist, the first Latin Americans to be allowed into the United States under the policy reversal might enter alongside Ukrainians, who have been arriving in Mexico by the thousands since the Feb. 24 Russian invasion of their country. U.S. authorities had already waived Title 42 for Ukrainians, who are currently being processed swiftly and separately from the other migrants—a move that has fueled further accusations of double standards in U.S. asylum policy.

The end of Title 42 is in many ways a return to the pre-pandemic status quo for Latin American asylum-seekers at the U.S. border. But a new rule announced on March 24 aims to fast-track asylum decisions by giving asylum officers the authority to approve claims without applicants appearing in immigration court. Those whose claims are denied can appeal to go before a judge, with a decision required in 90 days.

Pandemic-induced economic hardship has contributed to increased migration in several parts of the Western Hemisphere, with a greater variety of Latin Americans moving northward than in previous years. This trend can be seen in the nationalities of migrants apprehended by U.S. officials at the U.S.-Mexico border.

One of the Biden administration’s first migration policies focused on El Salvador, Guatemala, and Honduras, countries whose citizens dominated migrant flows at the border in early 2021. But over the course of fiscal year 2021, more citizens of Brazil, Cuba, Ecuador, Haiti, Nicaragua, and Venezuela were encountered at the border than during any year since current records began in 2007, the Migration Policy Institute reported.

The Biden administration has continued its predecessor’s policy of working closely with Mexican authorities, who have detained northbound migrants at Mexico’s southern border and introduced visa requirements for Ecuadorians, Brazilians, and Venezuelans at Washington’s request. For many Venezuelans, especially, who are fleeing the country’s political and economic crisis, such a visa is financially unattainable.

Several scholars and analysts see these U.S. policy changes as effectively shifting harsh U.S. migration restrictions south, beyond the U.S. border, even as asylum rights are provisionally restored along the Rio Grande. They also stress that legal challenges could bring Title 42 back, just as they revived the so-called “Remain in Mexico” program.

As Title 42 ends, it remains to be seen whether Mexico, which bears the brunt of externalized U.S. migration management, will take steps to improve access to humanitarian protection on its own soil. More than 29,500 people have already applied for asylum in Mexico in the first quarter of this year, 32 percent more than during the same period last year. But Mexico’s asylum program is chronically underfunded, and during the pandemic, migration officials stalled for months on issuing permits to applicants that allow them to work and move freely in the country.

Elisa Ortega Velázquez, a researcher at the National Autonomous University of Mexico, wrote in a newly published book that the process of applying for asylum in Mexico “is plagued by legal and practical obstacles,” such that it produces “empty rights.”

Many have alleged the same about the U.S. system under Title 42. As it is finally lifted, the Biden administration has a chance to prove otherwise.

Sunday, April 10: Mexicans vote in a referendum organized by President Andrés Manuel López Obrador’s supporters on whether he should finish the remainder of his six-year term, slated to end in 2024. 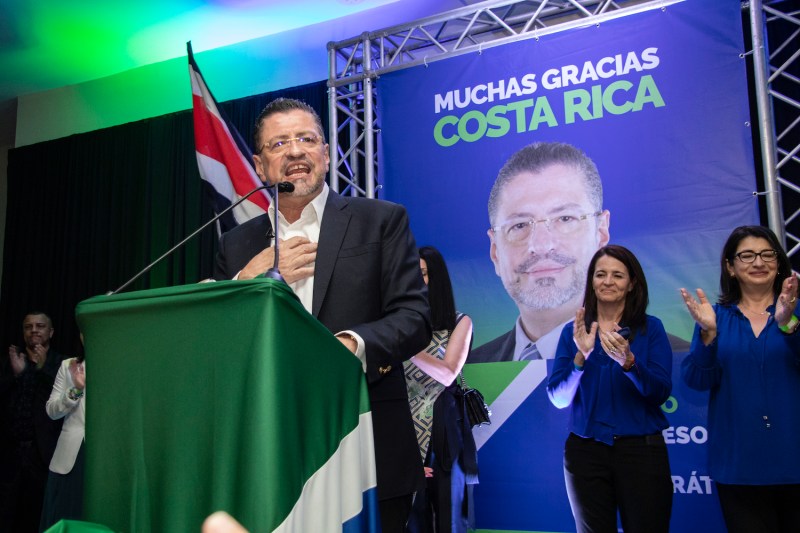 Chaves briefly served as Costa Rica’s finance minister in the country’s outgoing government and defeated former centrist President José María Figueres in the runoff. While Chaves pledged to shrink the size of Costa Rica’s state more than Figueres did, his economic platform was not radically different, Tatiana Benavides Santos wrote in Americas Quarterly. The larger distinction between the candidates was their tone and tactics, with Chaves pledging to rule by referendum to circumvent the Legislative Assembly.

Chaves was demoted at the World Bank in 2019 due to sexual harassment allegations, causing many women’s rights activists to campaign against him in the runoff. “That Chaves is near the presidency of this country reflects a society that still does not treat sexual violence with the seriousness that it merits,” lawyer Larissa Arroyo Navarrete told El País.

Chile’s constitution teeters. For the first time since Chile’s constitutional assembly began their work drafting a new constitution for the country last year, three different pollsters found more Chileans would vote to reject the new document than approve it. To be enacted, the draft constitution must first be approved internally by the assembly and then pass a nationwide referendum set for Sept. 4.

The constitutional assembly has struggled to communicate effectively with voters, University of Santiago political analyst Pamela Figueroa told Reuters. Leftist and independents dominate the assembly, and a robust campaign against the draft constitution—which is expected to widen socioeconomic and environmental rights—is already underway. To win public opinion back, pollster Axel Callís told El Mostrador, supporters of the new document need to explain “in concrete terms” what these expanded rights will mean for people’s lives.

The new data could complicate matters for President Gabriel Boric, who has long supported efforts to pass a new constitution. When asked about the new polls, he told reporters that “it’s not just about communication” and that the convention should seek to make broader agreements so that more Chileans see themselves represented in it. “I have profound faith in the convention,” he said.

Machu Picchu, which means “old mountain,” was a name that American explorer Hiram Bingham used to describe the ancient Inca city when he heard it from a tenant farmer who lived near the ruins on a trip in 1913. At the time, he also heard the possibility of the name Huayna Picchu but went with Machu Picchu, which stuck.

Tour guides do not appear likely to change the way they introduce the ruins, as Machu Picchu was a name that Incas indeed used to describe a nearby mountain. But the research shows how the site “was, and continues to be, a dynamic place with a shifting history,” historian Mark Rice told the New York Times.

Gabriel Boric went to Buenos Aires last weekend in his first international trip as Chile’s president. He visited a bookstore that National Geographic has called the most beautiful in the world. What is its name?

The building that now houses the bookstore was originally a theater, built in the eclecticist architectural style and opened in 1919. 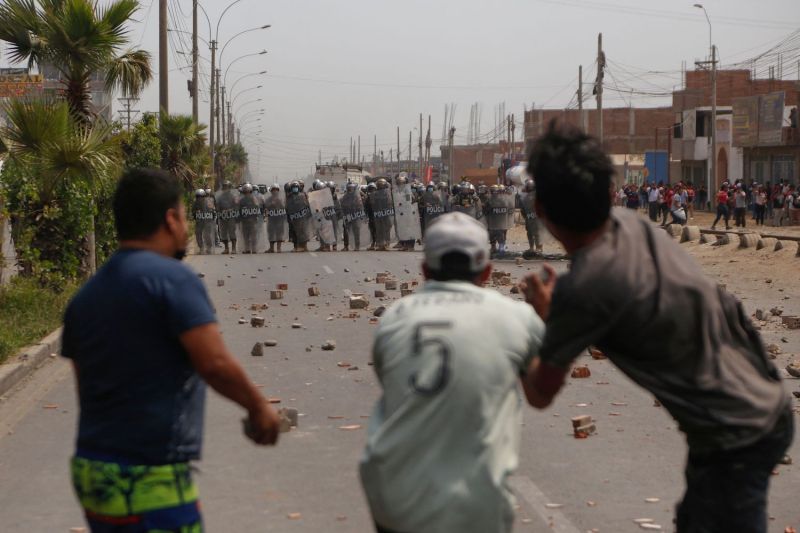 After Peruvian President Pedro Castillo survived an impeachment attempt in Congress late last month, the latest threat to his legitimacy has come from Peru’s streets, where Castillo’s own actions inflamed mass protests in recent days.

Demonstrations over rising fuel and fertilizer prices began last week in the central Peruvian city of Huancayo. They appear to be Latin America’s largest protests so far over inflation since Russia’s invasion of Ukraine, which pushed up already high prices in the region. Fuel and fertilizer are major Russian exports and have been sanctioned by many countries.

Because Castillo strongly identifies with Peru’s working class and has a background as a union organizer, some analysts initially thought he would be well positioned to handle demonstrations over bread-and-butter issues. As the protests grew, Castillo’s government announced tax cuts on food and fuel and approved a 10 percent increase in the minimum wage, which is set to take effect on May 1.

But the crisis continues to escalate. Castillo deployed the army to dozens of points across the country on Monday and declared a one-day curfew on Tuesday in the large cities of Lima and Callao, which prompted fresh protests.

Amid chaotic clashes between protesters and police across the country, at least five people were reported dead by late Thursday afternoon. Opposition groups called for Castillo’s ouster and fresh elections.

“It feels like this conflict could be a turning point that costs Castillo key support from his core base,” journalist Mitra Taj tweeted last Saturday. “Conflicts in rural Peru have destabilized previous governments.”

You are commenting as . Change your username | Log out
Tags: Mexico, Migration and Immigration, North America, South America, United States

NEW FOR SUBSCRIBERS: Want to read more on this topic or region? Click + to receive email alerts when new stories are published on United States, North America, South America