China and Russia Are Catching Up to U.S. in Space Capabilities, Pentagon Warns

The militarization of space is picking up pace.

Welcome back to Foreign Policy’s SitRep! The Russian warship that Ukrainian troops told to … well, you know what … may be no more. And Jack is making friends with the street dogs of Tbilisi, some of the best cared for in the world. Check out this absolute unit, for instance.

Alright, here’s what’s on tap for the day: Updates in the military space race, Japan shoots down AUKUS rumors, and Russia is not too pleased over Finland’s and Sweden’s possible NATO membership.

Welcome back to Foreign Policy’s SitRep! The Russian warship that Ukrainian troops told to … well, you know what … may be no more. And Jack is making friends with the street dogs of Tbilisi, some of the best cared for in the world. Check out this absolute unit, for instance.

Alright, here’s what’s on tap for the day: Updates in the military space race, Japan shoots down AUKUS rumors, and Russia is not too pleased over Finland’s and Sweden’s possible NATO membership.

China’s and Russia’s operational satellite fleets have grown by leaps and bounds over the past two years—by some 70 percent, according to a new Defense Intelligence Agency (DIA) report, in a sign that both U.S. adversaries have designs on the final frontier for wars of the future. And the United States may have some catching up to do. “Slowly but surely, we are heading toward [militarization of space],” said Dmitry Rogozin, the head of Russia’s state-owned space corporation. “Roscosmos has no illusions about this. Everyone is working on it.”

And the work is starting to speed up. Beijing and Moscow are close to achieving parity with the United States on several fronts, according to the DIA report. China has 262 intelligence, surveillance, and reconnaissance (ISR) satellites in space—nearly as many as the rest of the world combined, including the United States—and similar advantages in science and technology satellites. And beyond China’s orbital landers that have gone to the far side of the moon and to Mars, both countries appear to have designs on using space for military means.

The U.S. Defense Department believes that China has launched several missiles that could destroy satellites—Russia has similar counter-space technology—and both nations want to deploy jammers in space that could threaten U.S. communications, render the U.S. military’s command and control helpless, or stop the flow of satellite imagery, which has proved a real-time thorn in the side of the Kremlin during its ongoing war in Ukraine. Russia launched an anti-satellite missile as recently as November and views space as a place where it can begin to degrade U.S. precision strike capability, which the Pentagon has held over the Kremlin since the 1991 Gulf War.

China, which successfully tested an anti-satellite missile in 2007, probably intends to pursue more anti-satellite weapons and has had success in concealing its space program with domestic companies that are working in cahoots with the People’s Liberation Army, a phenomenon the Pentagon refers to as “civil-military fusion,” hiding foreign technology and expertise. And it is working quickly to enhance its ISR capabilities in the sky and deploy advanced satellites that can transmit more data back to Earth.

And there’s also the threat of a sky-high nuclear detonation causing electromagnetic damage, or space-based kinetic weapons becoming the soup du jour of nuclear conflict, as China showed last summer with a round-the-world hypersonic launch. The new DIA report provided a concerning look at China’s fractional orbital launch of an intercontinental ballistic missile with a hypersonic glide vehicle, the first of its kind. The July 2021 launch “demonstrated the greatest distance flown (~40,000 kilometers) and longest flight time (~100+ minutes) of any Chinese land attack weapons system to date,” the report stated.

Keep up each week with who’s rising and falling (and falling and falling) in the struggle for political relevance. Sign up for The Surge from Slate, written by senior politics writer Jim Newell.

Amb. Jim O’Brien was confirmed by the Senate and is now the State Department’s head of sanctions coordination, Secretary of State Antony Blinken said in a statement.

Rebecca Hersman has joined the Pentagon as the director of the Defense Threat Reduction Agency. She was previously at the Center for Strategic and International Studies (CSIS).

Usha Sahay started work as a speechwriter in the Office of the Secretary of Defense this week, she tweeted on Tuesday. Sahay was formerly a senior editor at Politico.

Kathleen McInnis, a former researcher at the Congressional Research Service, has joined CSIS as a senior fellow and the director of the think tank’s Smart Women, Smart Power Initiative.

Raucous JAUKUS. You know the saying: Three is a crowd, four is a party. Apparently that doesn’t go for the AUKUS military alliance between the United States, Australia, and the United Kingdom, which started with plans to develop a nuclear submarine for Canberra and is expanding to cooperation over hypersonic weapons and the electromagnetic spectrum.

Japanese and U.S. officials are shooting down rumors that Tokyo, one of the United States’ closest allies in the Indo-Pacific, will be next to join the alliance. “It is not a ‘JAUKUS’ plan,” White House press secretary Jen Psaki said this week of the alliance’s acronym, which would get even more AUK-ward if Japan joined up.

The beefed-up weapons package is a sign of how seriously Washington is taking the possibility of a pitched battle in Ukraine’s eastern Donbas region, as Russian troops are resetting for fighting there. Also on the way: More Switchblade drone systems and Javelin anti-tank missiles.

Vlad is mad. Russia is really not happy about the now very public rumblings that Finland and Sweden could join the 30-member NATO alliance as early as this summer after the Russian invasion of Ukraine.

After a joint press conference between the two countries’ leaders to announce their possible NATO ambitions on Wednesday, Dmitry Medvedev, one of Vladimir Putin’s top allies and Russia’s former president, said Russia would have to “balance” the situation in the Baltics if more nations join—likely meaning that Moscow could deploy nuclear weapons to Kaliningrad, the small exclave of Russian territory adjoining the Baltic countries. “There can be no more talk of any nuclear-free status for the Baltic. The balance must be restored,” Medvedev said on Telegram. 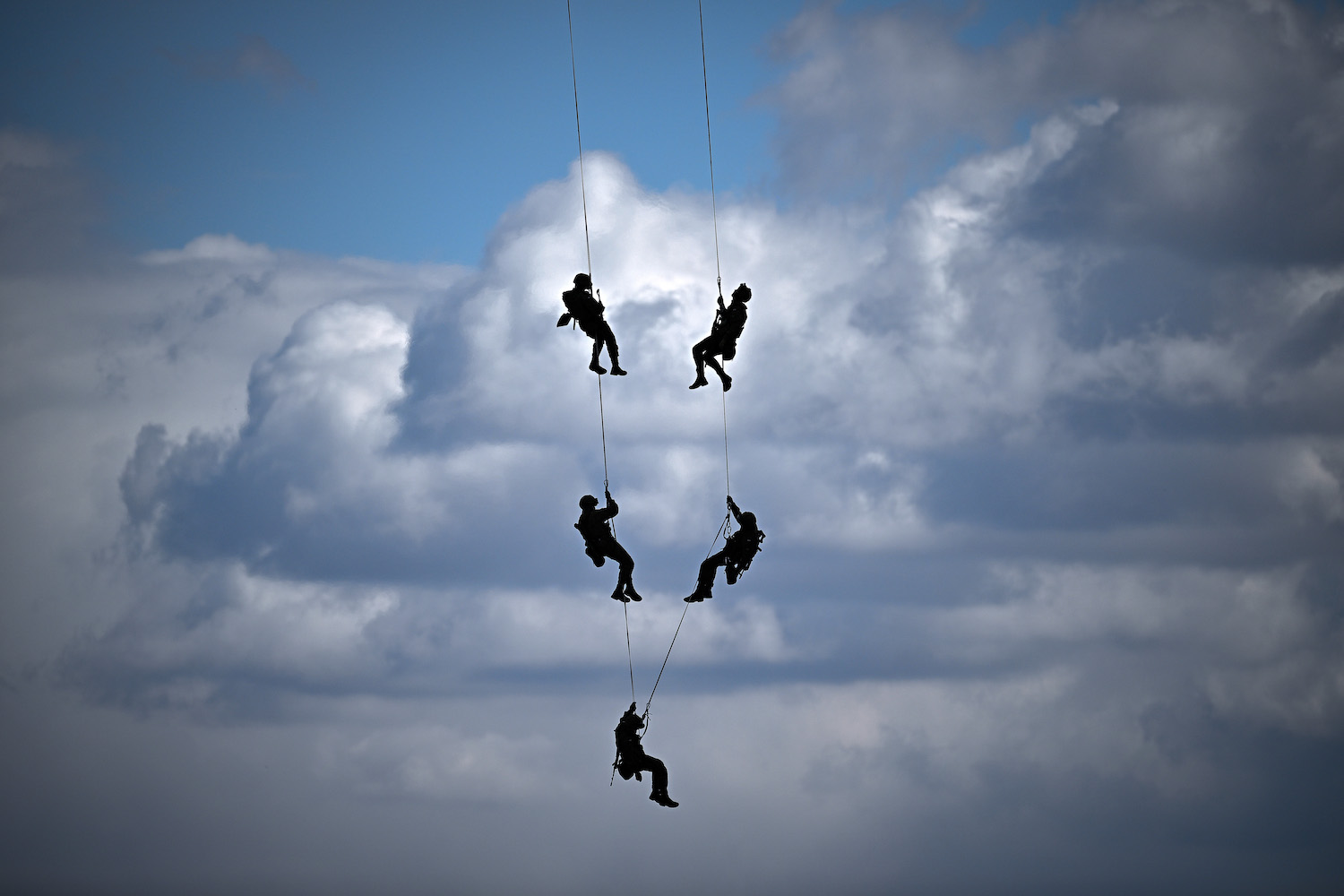 April 14: U.S. Secretary of State Antony Blinken is scheduled to meet with his Dutch counterpart, Wopke Hoekstra, during the latter’s visit to Washington.

“Russia counted on capturing Ukraine within five days. That was the deadline they established for obliterating our country and destroying our democracy. But they had no idea who they were up against.”

—Ukrainian President Volodymyr Zelensky in a daily address on April 13.

Swords go in your checked luggage, not your carry-on. Transportation Security Administration officers at the Boston airport stopped a passenger going through security over his cane … which secretly concealed a sword. Apparently the traveler was just as surprised as the officers; he told them he had “no idea” his cane had a secret compartment with a sword in it.

He’s the bomb. OK, we know this is a lot of dog content for one newsletter, but remember our buddy Patron, the Jack Russell terrier in Chernihiv who’s helping Ukrainian authorities sniff out explosives? He has discovered more than 100 mines, Ukraine’s general staff said in a tweet on Tuesday. And his handlers have put a strap on his back to carry him around.

You are commenting as . Change your username | Log out
Tags: Science and Technology, United States

NEW FOR SUBSCRIBERS: Want to read more on this topic or region? Click + to receive email alerts when new stories are published on Science and Technology, United States