Bumps in the road stall Finland and Sweden from joining the alliance.

Welcome back to Foreign Policy’s SitRep! We have some bittersweet news to share with you first: Our colleague Colum Lynch, ace reporter covering the United Nations and diplomacy, is leaving FP for greener pastures. He is an incredible colleague, mentor, and journalist, and we’ll miss him dearly. For fans of Colum’s reporting, stay tuned with him for his next moves.

And with that, here’s what’s on tap for the day: Turkey and Croatia signal they may say “nyet” to NATO expansion, U.S. President Joe Biden finally gets two top diplomats in place, and the top U.S. corruption watchdog for Afghanistan takes both Biden and former U.S. President Donald Trump to task.

Welcome back to Foreign Policy’s SitRep! We have some bittersweet news to share with you first: Our colleague Colum Lynch, ace reporter covering the United Nations and diplomacy, is leaving FP for greener pastures. He is an incredible colleague, mentor, and journalist, and we’ll miss him dearly. For fans of Colum’s reporting, stay tuned with him for his next moves.

And with that, here’s what’s on tap for the day: Turkey and Croatia signal they may say “nyet” to NATO expansion, U.S. President Joe Biden finally gets two top diplomats in place, and the top U.S. corruption watchdog for Afghanistan takes both Biden and former U.S. President Donald Trump to task.

NATO Expansion? That’s (Maybe) Gonna Be a No From Turkey, Dawg

After months of flirting with it, Finland and Sweden have finally decided they want to tie the knot with NATO and join the military alliance. (Thanks again, Russian President Vladimir Putin.) The two countries are meeting with U.S. President Joe Biden on Thursday morning.

Joining NATO, however, isn’t a simple process, even for two developed democracies with strong militaries that seem like just the right fit for the alliance.

It takes unanimous consent from all 30 NATO members, ratified by votes in parliaments (and in the United States’ case, the Senate) across Europe and North America.

Almost everyone is fully on board with expanding NATO to include two new Nordic friends, especially in the wake of Putin’s brazen invasion of Ukraine. We say almost because there’s a tiny handful of NATO members that smell a bit of opportunity in the game.

Spoiler alert. And by opportunity, we mean signaling they won’t support Finland and Sweden joining the club unless (wink, wink, nudge, nudge) the rest of the current or incoming members just do them a few solids first. Enter Turkey and Croatia, our first two spoilers on the NATO expansion train.

Turkish President Recep Tayyip Erdogan signaled this week he won’t support Finnish and Swedish membership because they’re not hard enough on Kurdish separatist groups that Turkey considers terrorist organizations. Oh, and Finland and Sweden slapped an arms embargo on Turkey in 2019 over its incursion into Syria. So maybe—and we’re doing some educated speculating here—Turkey could be signaling that it will change its tune on NATO expansion if those two aspirant members make some changes of their own.

He wasn’t exactly subtle. “Turkey certainly will not move away from the table before it gets what it wants,” Milanovic said, according to Total Croatia News. “How are we fighting for our interests?”

Playing hardball? Does that mean Finland and Sweden’s membership is dead in the water? It’s not impossible, but it’s still highly unlikely, according to six European officials who have spoken to SitRep about the process. Their read on the situation is that these announcements are just transactional negotiating tactics, designed to extract a few national policy or political gains from the rest of the alliance. Once those are sorted out, they’ll get on board with NATO expansion.

You can call it opportunism, underhanded extortion, or simple hard-nosed realism in the callous world of international relations. We’ve heard it referred to as all of the above from various officials tracking the behind-the-scenes diplomacy.

The irony is that the more the rest of NATO—particularly some of its most powerful members, such as the United States, United Kingdom, Germany, and France—want Finland and Sweden to quickly join, the more other NATO members may decide now is the time to raise a fuss over X or Y issue before signing off on NATO expansion.

The consensus among officials we’ve spoken to is that the train has left the station; now that Finland and Sweden formally requested to join, it’s only a matter of time—and sorting out some diplomatic headaches—before they do.

The clock is ticking though. In the eyes of Finland and Sweden as well as most other NATO members, time is of the essence. Right now, they’re in this awkward, vulnerable in-between period, where they’ve declared they want to join NATO but haven’t yet joined and received the extension of NATO’s full mutual defense protection umbrella. If Russia were to try some underhanded effort to derail Finland and Sweden’s NATO membership, now would be the time.

It’s unclear how likely that is, given how Russia has basically accepted that Sweden and Finland are already basically on team NATO and how overstretched and bogged down its military is in Ukraine right now.

Some countries have pledged interim security guarantees to Finland and Sweden to ward off any plans Moscow may have to try and interrupt the Finns and Swedes from joining NATO. And Finnish policymakers have been consistent in their messaging that they’re not too worried; their military can hold its own, and they’re used to dealing with their big neighbor to the east.

But suffice to say there could be a few more bumps on the road to NATO expansion.

The U.S. Senate confirmed Bridget Brink to be U.S. ambassador to Ukraine and Barbara Leaf to be the assistant secretary of state for Near East affairs yesterday. Brink will be the first Senate-confirmed ambassador to Ukraine since Marie Yovanovitch was forced out by the Trump administration in May 2019. Leaf’s confirmation had been held up for more than a year by Republican lawmakers.

The Atlantic Council’s Cameron Hudson is joining the Center for Strategic and International Studies Africa Program as a senior associate.

Mission failure. The Special Inspector General for Afghanistan Reconstruction (SIGAR) is out with a damning report that takes both the Trump and Biden administrations to task for dealing directly with the Taliban and giving the militant group assurances to withdraw U.S. troops that were essential to propping up the Afghan army.

FP columnist Lynne O’Donnell, who was in Kabul until the last month of the war, writes that SIGAR—which has long tracked the corrupt use of U.S. funds in Afghanistan—believes that Biden’s move to follow through with former U.S. President Donald Trump’s withdrawal conditions destroyed the Afghan army’s morale.

Under pressure. The United States is readying a sizable military aid package for India of up to $500 million in an effort to wean New Delhi off of its long-standing dependence on Russian weapons, Bloomberg reports.

The move would make India one of the biggest U.S. military aid recipients, as the United States looks to starve Russia of arms export revenue over its invasion of Ukraine. India has already begun taking deliveries of the Russian S-400 air defense system, rankling some U.S. officials.

Indeterminate surrender. Russia said on Thursday that 1,730 Ukrainian troops had surrendered in Mariupol, Ukraine, in recent days after Ukrainian officials said this week that they engineered a prisoner swap with Moscow for some of the fighters leaving the besieged Azovstal steel plant. The number would be far higher than the surrender figures that the Ukrainian government has acknowledged, initially believed to be in the few hundreds.

There could be reason to doubt Moscow’s accuracy though: The Kremlin has announced far fewer Russian deaths in Ukraine than Western officials believe the military has suffered. 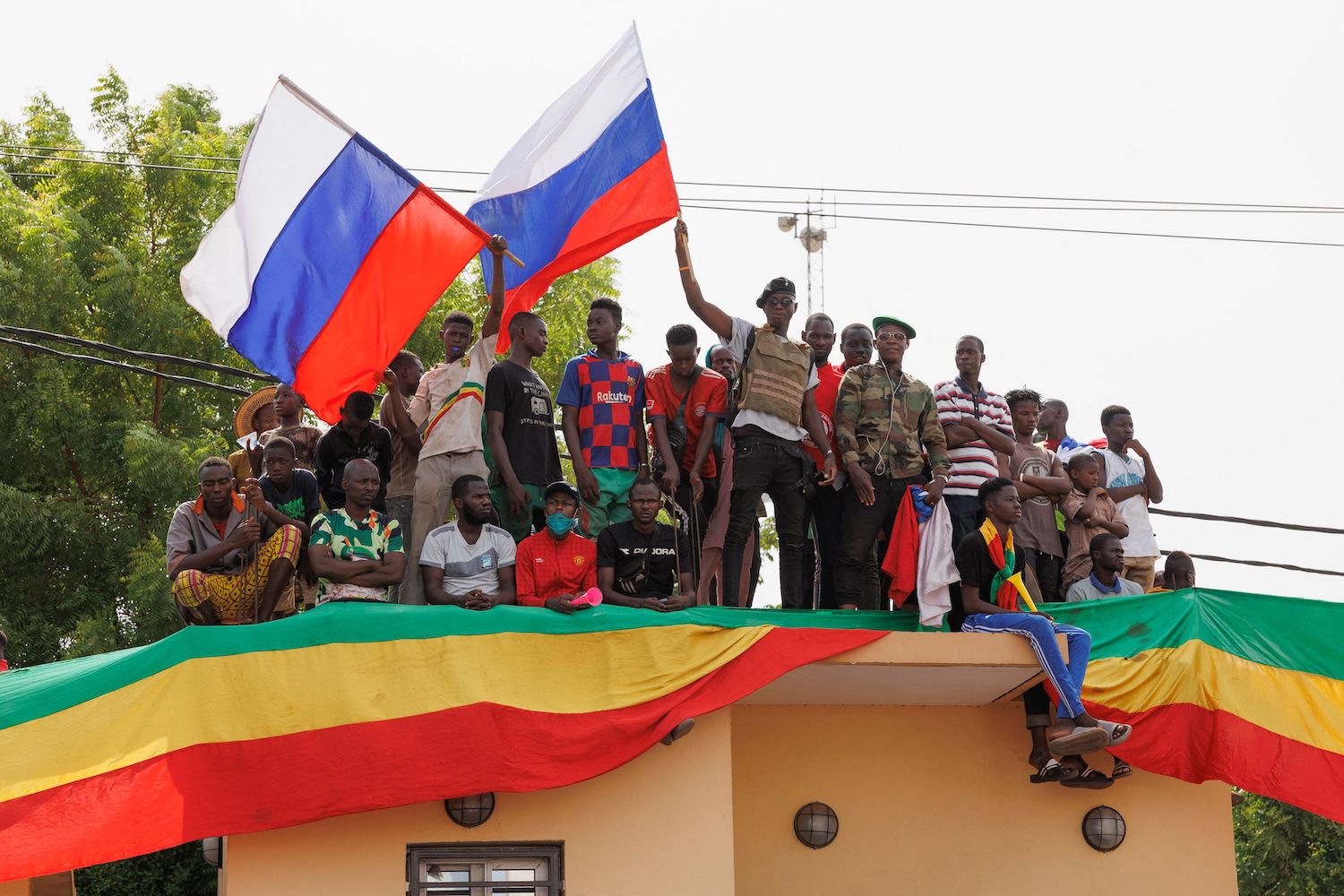 Several hundred Malians gather in the country’s capital, Bamako, to voice support for the ruling junta and military cooperation with the Russians on May 13. Ousmane Makaveli/AFP via Getty Images

Bud. John Gans, a former Obama administration official who wrote the definitive tome on the U.S. National Security Council, wrote in Foreign Policy this week on the death of Robert “Bud” McFarlane at the age of 84. McFarlane was former U.S. President Ronald Reagan’s third national security advisor and served during the Iran-Contra scandal.

“His story is a reminder of what is owed by those fortunate enough to work at the highest levels of government—and the toll that service can take,” Gans wrote.

Friday, May 20: U.S. President Joe Biden leaves for a four-day trip to South Korea and Japan.

“The result is an absence of checks and balances in Russia and the decision of one man to launch a wholly unjustified and brutal invasion of Iraq. I mean, of Ukraine.”

Sorry, Canada. But your least favorite export—Justin Bieber—is in the news again. Canada’s Tim Hortons coffee franchise is now selling “Timbiebs,” a play on their classic timbits donut holes. Need something to wash those Timbiebs down, you say? You can order it with a refreshing iced “Biebs Brew.”

You are commenting as . Change your username | Log out
Tags: NATO, War
Latest