At a leaders’ meeting in Tokyo, the group widened its strategic focus to include the Indian Ocean region.

The Quad Widens Its Focus to the Indian Ocean

The leaders of the countries in the Quadrilateral Security Dialogue, or Quad—Australia, India, Japan, and the United States—met for the fourth time in Tokyo this week. Their joint statement pledged continuing cooperation, from a COVID-19 vaccine program to cybersecurity collaborations. The group has enjoyed significant momentum in recent years, in part because each member has seen relations with China fall to the lowest level in decades.

The joint statement mentioned a new initiative that bodes well for India: a program to monitor maritime challenges, from natural disasters to illegal fishing, that includes information- and resource-sharing centers in the Indian Ocean region, as well as Southeast Asia and the Pacific islands. This shows the Quad has widened its geographic focus to areas of strategic interest to India, which is increasingly concerned about China’s growing presence in the region. It also suggests the Quad is keen to do more in the areas that matter the most to all four members.

The Quad was launched in 2004 to provide humanitarian assistance to Asian countries after an earthquake and tsunami that year hit the Indian Ocean region hard. However, much of the group’s recent strategic focus has been on East and Southeast Asia—including affirming support for the Association of Southeast Asian Nations, expressing concerns about maritime challenges in the East and South China seas, and pledging assistance to the Pacific islands. The Quad’s signature projects, such as its vaccine partnership, specifically target Southeast Asia and the Pacific islands. But the new maritime initiative defines the Indo-Pacific as a geographic whole, placing equal emphasis on each part.

The Quad countries understandably worry about China’s growing commercial ties with Southeast Asian states and its militarization of territorial disputes in the South China Sea. The maritime monitoring initiative reflects concerns about Beijing’s growing presence in the Indian Ocean region, too. China has ramped up infrastructure investments in Bangladesh, the Maldives, and Sri Lanka. Its fishing vessels appear all over the Indian Ocean, and India said last year that it had discovered a Chinese research ship near the Andaman Islands, where New Delhi has territorial possessions.

China is also expanding its military presence. It has established a military base in Djibouti, in East Africa. According to the Indian Navy, at any given time, six to eight Chinese naval warships are operating in the northern Indian Ocean. “Within a decade, China could position itself as the dominant naval power in the critical space stretching from the Malacca Strait to the Bab-el-Mandeb strait,” South Asia security scholar Sameer Lalwani wrote recently. 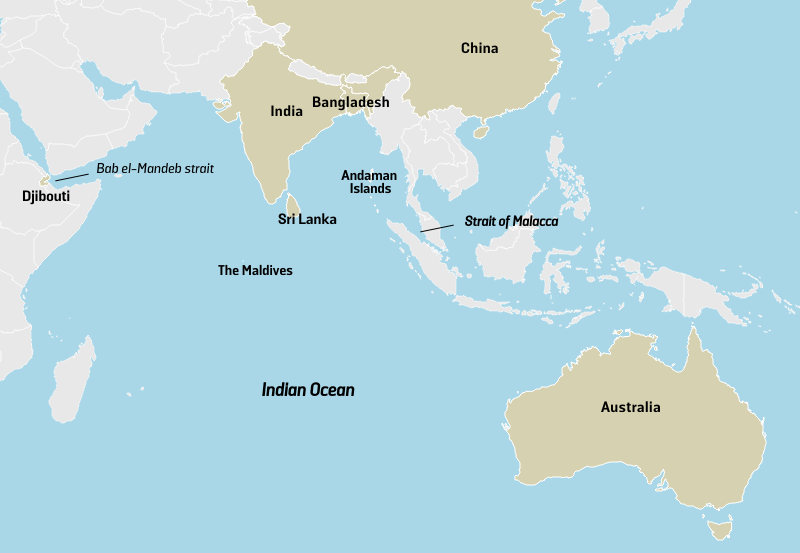 The Quad’s new maritime initiative raises the possibility that two of the group’s fundamental goals—promoting stability and providing public goods—will extend more fully into the Indian Ocean region and the states that straddle it.

More political drama in Pakistan. Pakistan’s political temperature is still spiking, amid mounting economic challenges. Former Prime Minister Imran Khan—ousted in a no-confidence vote last month—previously announced he would lead a march into Islamabad on May 25 and that he would remain there until the current government agrees to early elections. This weekend, police raided the homes of several opposition leaders and arrested another on unclear charges. On Tuesday, the government declared that Khan’s march could not go forward.

Khan and his supporters within the Pakistan Tehreek-e-Insaf (PTI) party went to Islamabad on Wednesday anyway. Some PTI supporters were tear-gassed by police, and nearly 2,000 people were arrested. There were also some reports of violence perpetrated by PTI supporters. But on Thursday, Khan abruptly changed course: He announced that he would leave Islamabad but would return in six days if the government didn’t agree to early polls.

The about-face could be to avert more violence, but it also suggests that some negotiations are taking place with the government that may lead to early elections. The government is possibly already signaling the decision: According to media reports and several ruling party leaders, talks about possible election dates have occurred in recent days. And on Thursday, the National Assembly passed a new law that would limit options for voting by Pakistanis overseas, many of whom are PTI supporters.

Afghan journalists protest. The Taliban recently announced that all female news anchors must wear face coverings on air, following other draconian restrictions on women’s freedoms. Some male journalists have now chosen to express solidarity with them by wearing face masks during their television appearances, too, saying they will do so until the Taliban rescind their decree. Other prominent Afghans, including former President Hamid Karzai, have called on female presenters to defy the order.

Afghan journalists and women have suffered since the Taliban took over last August. Afghan reporters have been beaten and threatened by the Taliban, and many of them have fled the country. The crackdowns contrast with the Taliban’s treatment of foreign journalists, who have operated more freely, likely to project a softer side of the regime to the world. Last week, for example, CNN’s Christiane Amanpour interviewed senior Taliban official Sirajuddin Haqqani.

Sri Lanka’s prime minister pledges budget cuts. New Sri Lankan Prime Minister Ranil Wickremesinghe promised significant cuts in an interim budget scheduled for release in six weeks, according to Reuters. He said the reductions will include slashing infrastructure projects to free up more funds for a new relief package. Sri Lanka has come full circle: The roots of its current economic crisis go back to prioritizing infrastructure projects—and taking out huge loans to finance them—at the end of its civil war in 2009.

Sri Lanka’s government also announced this week that it has hired international advisors to help restructure the country’s huge debt. Both moves—austerity and debt restructuring—are necessary for Sri Lanka to receive the bailout package that it is currently negotiating with the International Monetary Fund.

On Tuesday, the Taliban reached an agreement with GAAC Solutions, an aviation company based in the United Arab Emirates, to manage ground operations at airports in the Afghan cities of Herat, Kandahar, and Kabul. The move is somewhat surprising given the Taliban’s previous negotiations with Qatar and Turkey over an airport deal. But GAAC has managed ground operations at the Kabul airport since the Taliban takeover last year.

One reason the Taliban may have extended the arrangement with GAAC is that the firm agreed not to have any security personnel operating in Afghan airports. The Taliban have long insisted there can be no foreign security forces in Afghanistan.

The new agreement is a best-case scenario for the Taliban, which can now strengthen airport operating capacity and increase the chances of more international fights, which have been infrequent since the Taliban takeover. The deal is also a boon for Taliban public relations: It shows that the international community is willing to do business with the regime, despite its regressive social policies.

The regime is likely to continue pursuing assistance from foreign companies, which is not a new strategy. When they held power in the 1990s, for several years the Taliban negotiated with the U.S. energy company Unocal on a potential pipeline project. (Unocal pulled out because of growing U.S. concern about the Taliban’s ties to al Qaeda.)

In the Daily Star, architect Adnan Zillur Morshed argues that fixing Dhaka’s notorious traffic problems requires much more than technical solutions like better traffic lights. The Bangladeshi capital’s traffic jams are “the result of a complex combination of sociocultural factors, lack of rational land use, and misguided urban governance,” he writes.

Environmentalist Neha Panchamia writes in the Print about the importance of releasing endangered species back into the wild in India, despite the challenges of finding the right place to do so. “There is a pressing need to rehabilitate and release individual animals proactively—they’re better off getting a second chance at survival than spending their lifetime in captivity and burdening a system that is already crumbling without respite,” she writes.

Pakistan Today columnist Nazim Uddin warns that supporting former Prime Minister Imran Khan is not a good move for Pakistani youth. “It is about time the youth followed rationality, evidence, and reality before putting their allegiance before a person who can manipulate them,” he argues.

You are commenting as . Change your username | Log out
Tags: India, Security, South Asia

NEW FOR SUBSCRIBERS: Want to read more on this topic or region? Click + to receive email alerts when new stories are published on Security, India, South Asia