China Attempts a Victory Lap in the South Pacific

But no new deals have been inked—yet.

Welcome back to Foreign Policy’s SitRep. For those still thinking about Memorial Day this past weekend, take a brief trip back to 1882 with this poem by Henry Wadsworth Longfellow commemorating the holiday (which at the time was known as Decoration Day).

Alright, back to business. Here’s what’s on tap for the day: China stages an island-hopping campaign in the South Pacific, Ukraine gets some new long-range guns, and Myanmar’s military junta ramps up civilian killings while the world looks the other way.

Welcome back to Foreign Policy’s SitRep. For those still thinking about Memorial Day this past weekend, take a brief trip back to 1882 with this poem by Henry Wadsworth Longfellow commemorating the holiday (which at the time was known as Decoration Day).

Alright, back to business. Here’s what’s on tap for the day: China stages an island-hopping campaign in the South Pacific, Ukraine gets some new long-range guns, and Myanmar’s military junta ramps up civilian killings while the world looks the other way.

China’s top diplomat, Wang Yi, has a lot of new stamps in his diplomatic passport after a multiday swing through the South Pacific, a would-be victory lap after inking an extensive security pact with the Solomon Islands first drafted in April.

But Wang has failed to ink new security deals on par with its new pact with the Solomon Islands, which Foreign Policy reported on last month. In a 10-country meeting with South Pacific counterparts on Monday in Fiji, China could not convince the island nations to agree on another pact covering everything from security to fisheries.

Still, regional allies are already spooked. Australian Prime Minister Anthony Albanese has been in office for barely a week, and he’s already deployed his top diplomat, Penny Wong, to the region twice: on a two-day visit to Fiji last week and on a jaunt to Samoa and Tonga that began yesterday.

There’s a feeling that these countries are uniquely vulnerable to Chinese pressure. China is pushing to build a large wharf in Vanuatu and has built military ties with Fiji, Papua New Guinea, and Tonga. Tonga owes nearly $108 million, about a quarter of the tiny country’s GDP, and the situation is only getting worse after a devastating volcanic eruption and tsunami in December 2021.

China has insisted that the visits aren’t an effort to interfere in the business of countries in the South Pacific or seek exclusive deals, but U.S. and Australian officials are skeptical. There’s a lingering fear that China could line the pockets of officials in the region with under-the-table cash in exchange for security guarantees that lead to military basing rights.

The U.S. Defense Department’s annual report on the Chinese military, released last year, hinted that U.S. officials believe China is aiming to strengthen military relationships in the South Pacific region. And there’s an eerie feeling among officials and experts that SitRep has spoken to about China’s island-hopping campaign. Could it be another effort to sneakily build up military bases and infrastructure, as Beijing has pursued in Djibouti, the United Arab Emirates, and Cambodia?

“It kind of changes the strategic calculus for Australia because we now have to deal with a Chinese outpost close to our home. And it’s not something we’ve had to deal with before,” Mick Ryan, a retired two-star major general in the Australian Army, told Foreign Policy in an interview last month.

And Wang’s trip could have systemic implications if China begins to rack up more security deals. “Because of the influence the Chinese Communist Party is exerting over the Solomon Islands’ prime minister and the kinds of surveillance capabilities that may be provided, [they] just are not the kind of things that you would like to have in a country where you want to nurture democracy and transparency and auditability of government,” Ryan said.

Mike Hammer has been announced as the new U.S. special envoy for the Horn of Africa region, replacing David Satterfield, who left the post in April after just a few months on the job.

Satterfield, meanwhile, will be heading to the world of academia as the new director of Rice University’s Baker Institute for Public Policy.

The systems, called High Mobility Artillery Rocket Systems (HIMARS), could help Ukraine take out longer-range Russian artillery that has battered Ukrainian forces as Russia tries to regain offensive momentum. Ukraine has guaranteed at the highest levels that it won’t fire the weapon, which has a range of about 40 miles, into Russia.

Proliferation games. New data shows how nervous one of Washington’s top allies in Asia is getting about the state of its neighborhood. An overwhelming majority of South Koreans support the idea of Seoul pursuing its own nuclear weapons program, according to a new poll from the Asan Institute for Policy Studies.

According to the study, 70.2 percent of South Koreans back an indigenous nuclear weapons program—and almost 64 percent still favor it even if it leads to sanctions for violating the international Treaty on the Non-Proliferation of Nuclear Weapons. That doesn’t mean South Korea will actually get a nuclear weapons program anytime soon, particularly given its preexisting security guarantees and extended nuclear deterrence from the United States. But still…

While no one’s looking. Myanmar’s security forces have ramped up attacks and indiscriminate killings of civilians along the country’s border with Thailand in a new military campaign that has gone largely unnoticed by the outside world, our colleague Mary Yang reports.

Human rights organizations have criticized the international community for its relatively muted response to the campaign and say powerful countries in the region as well as the United States could be doing more to sanction the ruling junta. 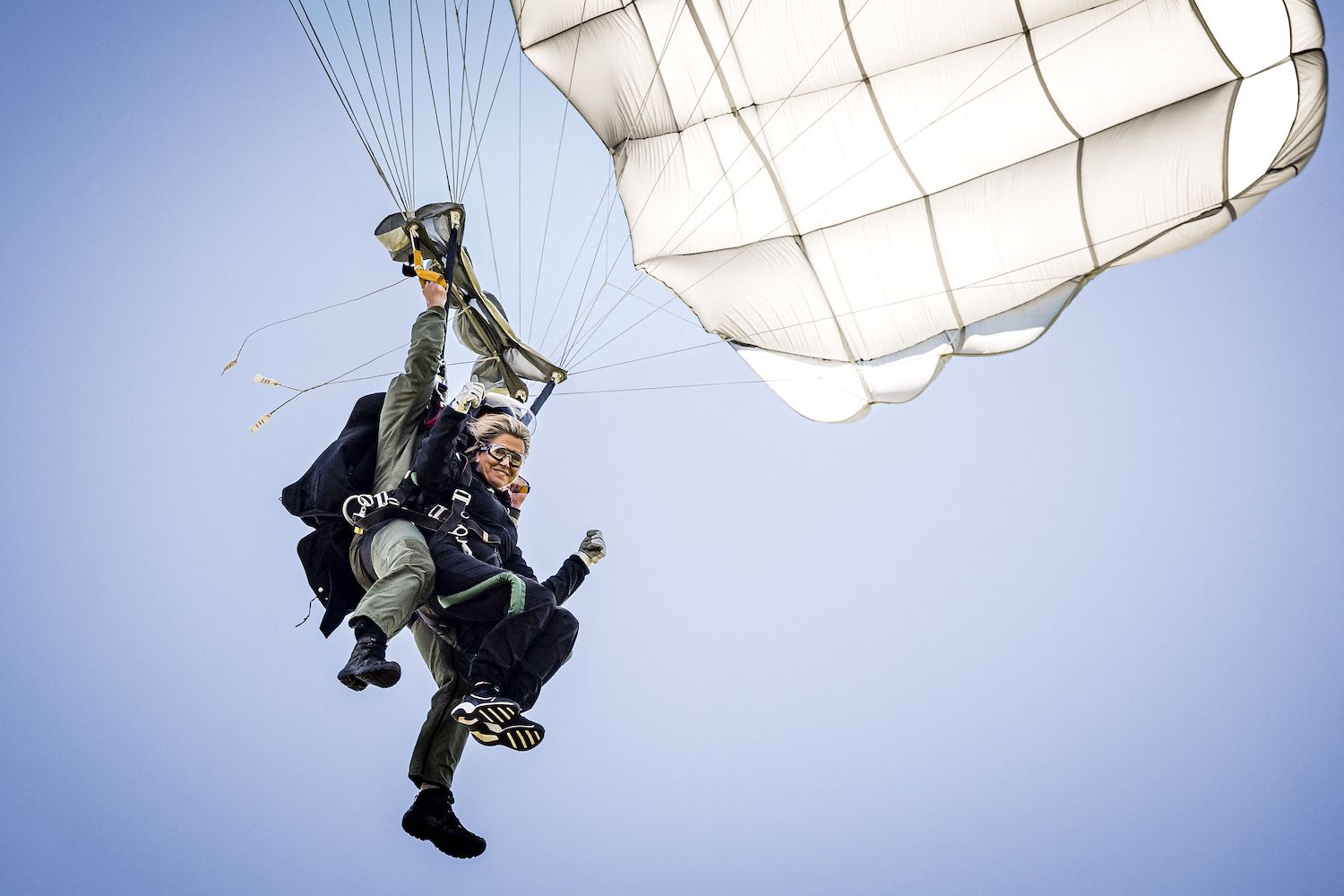 Queen Maxima of the Netherlands glides with an instructor after leaping out of an aircraft at the Dutch armed forces’ Defense Para School training center in Breda, the Netherlands, on June 1.Rob Engelaar/ANP/AFP via Getty Images

Better late than never, I guess? State lawmakers in Massachusetts officially pardoned Elizabeth Johnson Jr., 329 years after she was convicted and sentenced to death in the Salem Witch Trials. Johnson was not executed but also not officially pardoned. Students in North Andover, Massachusetts, first brought the oversight to the attention of the legislature.

You are commenting as . Change your username | Log out
Tags: Asia, China, Pacific Ocean

What Lionel Messi Reveals About Geopolitics

U.S. Wants Answers About China's New Base in Cambodia

Can China's State Media Become as Trusted as the BBC?